AFRL is collaborating with a North Carolina-based small business to develop biomanufacturing processes to rapidly expand austere airfields using common agricultural chemicals and natural resources (soil and water) found at the location. These processes significantly reduce the need for heavy equipment, large teams of civil engineers and large quantities of cement and other materials to be shipped to the site. Instead, it allows bacteria to transform the local soil into hardened “biocement” by creating calcium carbonate crystals and binding the soil. This allows US forces to build infrastructure in otherwise resource-poor locations and operate from locations that were previously inaccessible. Once US forces have finished using the airfield, the hardened earth can easily be returned to its original state, lessening the ecological impact of overseas deployments of military personnel. 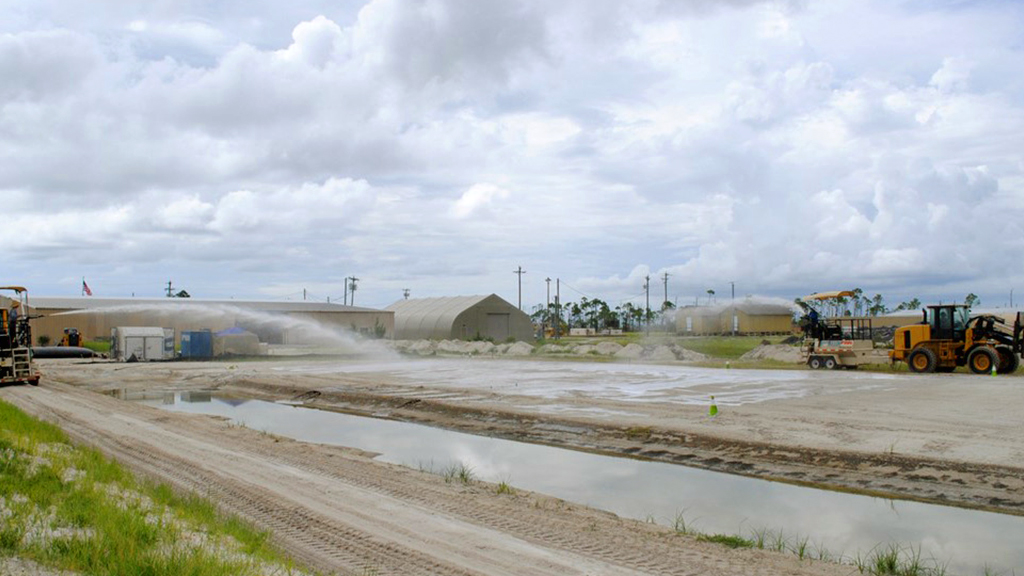 Biomanufacturing and “biocement” will enable tomorrow’s US Air Force to project power and realize their Global Power and Global Reach missions. This capability is made possible by the expertise of AFRL Materials & Manufacturing researchers working to translate the commercial developments to meet the special needs of the military.

Naturally occurring bacteria, S. pasteurii, are grown on site and sprayed onto the soil where they are given a chance to percolate and grow. Feedstock chemicals, urea and calcium chloride, are then prepared and sprayed on the soil surface. The bacteria produce an enzyme called urease that reacts with urea to form ammonia and carbonate. In the presence of calcium, this forms calcium carbonate, which binds the soil particles together increasing the overall strength of the soil.

The “biocement” process can be used to treat and stabilize weak sandy soils and significantly improve the soil’s load-bearing capacity. The entire process can be carried out in less than 96 hours from initial setup to ready-to-use surface. AFRL and the Air Force Civil Engineer Center (AFCEC) are currently working to test the ability of “biocement” stabilized soils to support heavy ground vehicles and cargo aircraft for short-duration operations.