Launched on June 25, 2019, the Air Force Research Laboratory Space Vehicles Directorate’s Demonstration and Science Experiments (DSX) spacecraft will conduct applied research designed to boost the Department of Defense’s (DoD) capability to operate in the harsh radiation environment of medium-Earth orbit (MEO). The MEO environment presents unique challenges to spacecraft because the radiation from the Van Allen belts located at those altitudes can damage spacecraft components. DSX will study the effects of this radiation and collect data on its energy distribution and behavior to increase understanding of this orbital regime and enhance the DoD’s capability to field resilient space systems.

DSX was manifested on the Space Test Program-2 (STP-2) mission, utilizing the SpaceX Falcon Heavy launch vehicle. It is the first DoD launch on a Falcon Heavy, and serves as the DoD qualification flight for use of refurbished boosters. DSX will be flown in an elliptical orbit in MEO for one year of experimental operations. 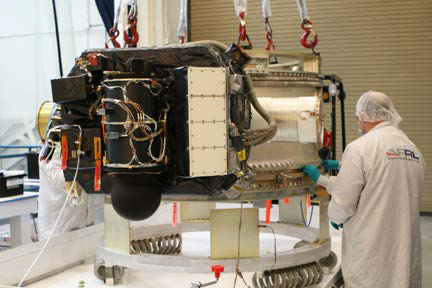 Why Is the DSX Satellite Important to the Air Force?

DSX’s unique orbit will supplement the Air Force’s understanding of the MEO environment by gathering data regarding:

The Wave Particle Interaction Experiment (WPIx) will investigate the influence of very-low frequency (VLF) radio waves on particle dynamics within the radiation belts.

The DSX design uses an Evolved Expendable Launch Vehicle (EELV) Secondary Payload Adapter (ESPA) ring as an integral structural component. Spacecraft functions, such as power management and attitude control, are contained within an Avionics Module (AM) on an ESPA ring port. The experiment payloads are located in a Payload Module (PM) attached to the ring opposite the AM.

Wave Particle Interaction Experiment – The WPIx will transmit and receive VLF radio waves to investigate their interactions with trapped electrons in the magnetosphere. The VLF antenna onboard DSX offers a rare opportunity to study the behavior of such an antenna in-situ and characterize its far-field radiation pattern, as well as wave-particle interactions with trapped electrons. 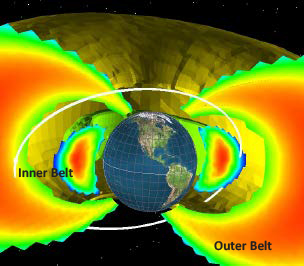 Space Weather Experiments – The Van Allen radiation belts consist of energetic particles trapped in the Earth’s magnetic field. The suite of SWx instruments will characterize the region along the DSX orbit, collecting data on high and low energy electrons and proton fluxes as well as pitch angle distributions. In addition to providing observational support to the WPIx experiment, it will deliver a comprehensive survey of the radiation environment at MEO. This suite will also enable observation of the “slot region” between the inner and outer radiation belts, leading to better understanding of the belt dynamics. The data collected from this experiment suite will be used to supplement models of the space environment and aid in the design and mission planning for future spacecraft through incorporation into AFRL’s International Radiation Environment Near Earth (IRENE) radiation belt specification models.

The Adaptive Controls Experiment will evaluate the behavior of the two sets of lengthy booms hosted on DSX. Once launched, DSX will become one of the largest deployable structures on orbit as one set of booms extends 40 meters in each direction, and the other set extends 8 meters in each direction. The forces affecting these large structures can be challenging to conceptualize. The ACE software will improve our understanding of this behavior by performing automated on-orbit system analyses to develop functions to characterize the forces working upon these large structures. These functions will then be used to support the spacecraft attitude determination and control system to best meet DSX performance objectives.

Benefit to the Nation

DSX will benefit the warfighter by significantly enhancing understanding of the MEO radiation environment and the requirements for operating space systems there, with particular emphasis on the “slot region.” In addition, DSX will advance our understanding of the interplay between waves and particles that underlie radiation belt dynamics, enabling better specification, forecasting, and mitigation of environmental impacts to spacecraft in orbit. 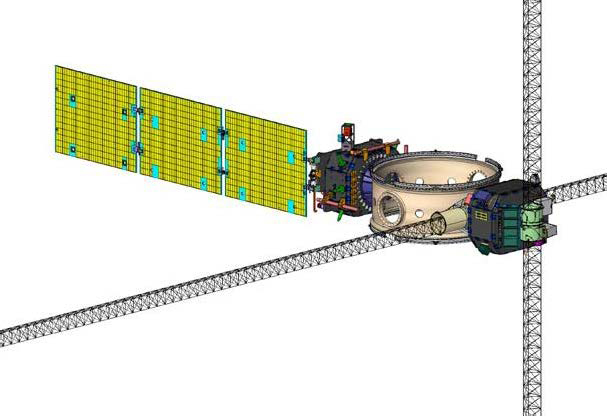