WRIGHT-PATTERSON AIR FORCE BASE, Ohio (AFRL) – Senior Defense Department and Air Force officials announced a plan June 27, 2022, to create the first Department of the Air Force University Affiliated Research Center, or UARC, focused on tactical autonomy. The new center will be the first to be led by a Historically Black College or University, or HBCU, and will be the 15th UARC created within DOD.

DAF leaders recognize the talent pool within HBCUs and found there are currently zero R1 HBCUs. While the UARC was created to address the DAF imperative for tactical autonomy, it also served to be able to boost an R2 HBCUs research capacity and help them transition to an R1. An R2 rating is “high research activity” while an R1 rating is “very high research activity.”

“The [Department of the Air Force] has never historically had a UARC. Additionally, there’s never been a UARC with a HBCU,” said Marcus J. Smith, AFRL’s diversity, equity, inclusion and accessibility officer. “We owe it to ourselves to continue to expand our aperture and look at opportunities to diversify the workforce, partnerships and the collaborative opportunities that we are going out and establishing. Not only is there significant expertise embedded in these HBCUs…but they have historically been an untapped source of high potential talent, enabling us to create a recruitment pipeline. So this is a huge opportunity for all parties involved, not only the DAF and the HBCUs, but also AFRL who will interface tremendously regarding the research and development portion.”

Smith said the effort came from the office of Air Force Chief Scientist Dr. Victoria Coleman. Coleman is the sponsor, the Secretary of the Air Force Concepts, Development, and Management Office, or SAF/CDM, is providing the overall management and AFRL is providing significant functional support, including a deputy program manager.

“It came to fruition out of her office and — being the research lab of the Air [and Space] Force and the alignment regarding autonomy, one of our core technical competencies — it naturally made sense for additional management and support to come from AFRL,” Smith added.

The untapped potential is with HBCUs graduating 30% of African American science, technology, engineering and math professionals, but receiving less than .05% of DOD research funding.

HBCUs consistently produce high caliber STEM talent able to compete for advanced degrees at top academic programs: more than one third of African American STEM PhD holders earned a bachelor’s degree from an HBCU, while 88% of these PhD holders receive PhDs from non HBCUs, according to Air Force officials.

While this is one effort to expand the aperture and create more access for underrepresented groups, there are a number of programs dedicated toward strengthening partnerships and recruiting. Additionally, AFRL is consistently evaluating collaborative opportunities and identifying areas for growth. This will be captured in the Historically Black College or University/ Minority Serving Institution engagement strategy that is being worked out of Dr. Smith’s office.

Because the new UARC will feature research in tactical autonomy, Dr. Juan Vasquez, product development director, Autonomy Capability Team 3, or ACT3, with AFRL, said there are three main areas to consider, albeit with a bit of fidelity beneath them.

“First, fundamental automation: you think of an AI trying to fly or drive something,” he said. “But then the second one has to do with the human interaction with that, because there’s very few AI tools that are going to be completely independent of humans…The human machine teaming is another very important piece. The third one was more like in the trust area.”

Vasquez said it is relevant to ask questions like: How to build some trust into an AI so that the users believe it? Is it behaving ethically? Is it executing the mission the way a warfighter would if a human was in the loop?

“You need to have technical merit to address tactical autonomy, although we don’t expect one university to be able to do it all,” Vasquez said. “They need to be competent to at least address that technical work, [and] they need to have quality personnel.”

In an effort to gain and maintain quality personnel, Smith said one goal or vision is to “reflect the nation that we serve — in terms of demographics.”

“By establishing these long-term relationships we can meet a number of goals and objectives that are mutually beneficial,” Smith said. “We invest into these schools to help us meet our research needs, subsequently we help them with capacity building, and we can inadvertently tap into their talent…creating another recruitment tool to bring folks into the DOD, Air Force and AFRL and diversify our workforce.”

Tactical autonomy became the topic because it’s a high-priority area for the DAF, and is of significant value to the Air Force, Smith added.

“So any opportunity that we have to gain greater access [to those underrepresented populations] is always going to be beneficial and although this is not a recruiting initiative, I think some of the results may be impactful,” Williams said.

“We are excited, and we are standing by to see how we can help in any way,” McNeal said. “We have many members of AFRL who are attached to the Integrated Process Team for the UARC, and they’re doing this in addition to their regular work.”

Additionally, Williams said AFRL’s support has been a great benefit and ongoing efforts wouldn’t be possible without AFRL.

“There is a whole of government to include our civilian counterparts within the defense industry and small businesses that are going to be a critical aspect to making this thing work,” Williams added.

With another goal of moving the research level up for some universities, Williams said the team will ensure the technical aspect as well as some educational and outreach activities are done in line with the UARC. They will also work to move one, if not more, of the HBCUs from an R2 to an R1 classification.

“But some of that infrastructure and being able to bring faculty on board, [as well as] being able to do [what is] necessary to move an institution that’s currently classified as an R2 to an R1,” he said. “[It] is going to be critical that we bring all these different players, and that’s United Negro College Fund [as well as] the Thurgood Marshall College Foundation, and the civilian technical industry.”

Additional support will come from the existing UARCs, as nearly all have stated they’re willing to provide support to ensure this UARCs’ success.

“They don’t see this as a competition,” he added. “Every single one that I’ve spoken with has offered their support in terms of sponsorship if we need anything, they’re willing to assist us because they want to see this UARC be as successful as the other ones.”

Even with a vast amount of support, Vasquez said it can be hard for a university to transition. And it will be important for them to work on operationally relevant items.

In addition, the lead university will need a consortium management plan, which includes their ability to bring in other universities, Vasquez said.

These questions and many others must be answered as part of the evaluation criteria for the BAA.

“Part of the BAA is to ensure the universities are afforded the opportunities to [enhance their Carnegie Foundation Classification],” Vasquez said.

Vasquez said this can be a challenge for any academic institution but more so for those with research levels at an R2. R2 institutions are often overlooked because their research capacity doesn’t match those of R1 institutions, but that does not mean they are not capable.

For more information about the DAF UARC on Tactical Autonomy, please visit https://www.afrl.af.mil/tactical-autonomy-UARC/. 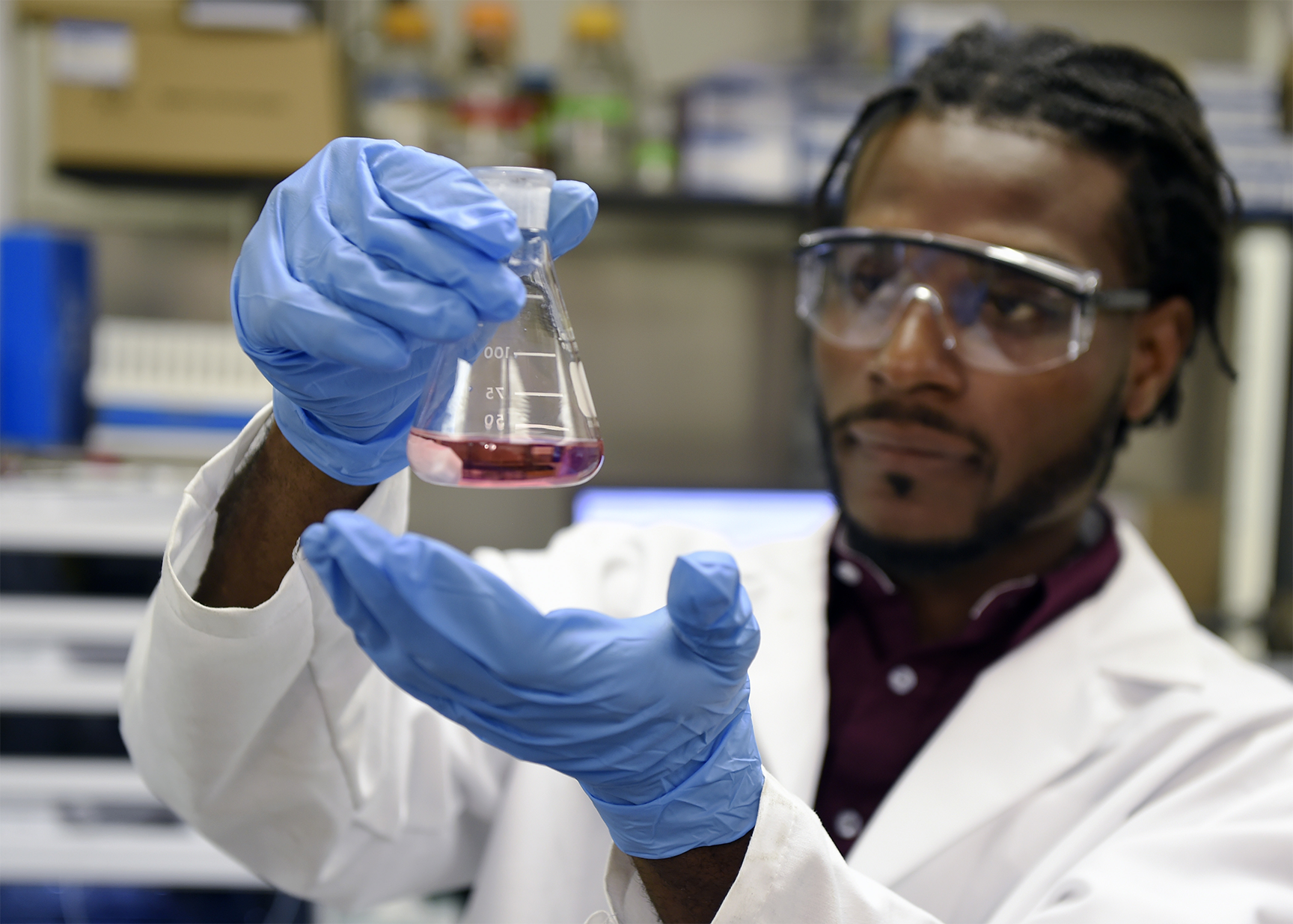 Morgan State physics major Derick Buckles works in the lab June 16, 2015, during a 10-week internship at the Naval Research Laboratory in Washington, part of a summer research program administered by the Department of the Navy’s Historically Black Colleges and Universities and Minority Institution, or HBCU/MI, program. In addition to conducting scientific research, undergraduates attend scientific and skill-set seminars on topics including laboratory safety, ethics in science and engineering, job-search and interviewing skills and resume writing. (U.S. Navy photo by John F. Williams / Released)