“How we [research] science and how we transition the fruits of our research is more critical now than ever in the face of our advanced adversaries,” said Dr. Shery Welsh, director, AFRL/AFOSR. “The future begins with basic research, and one of AFOSR’s most critical basic research transition paths is our own Air Force Research Lab and its stellar researchers. Our AFRL Star Team awards represent our most spectacularly brilliant scientists and engineers.” 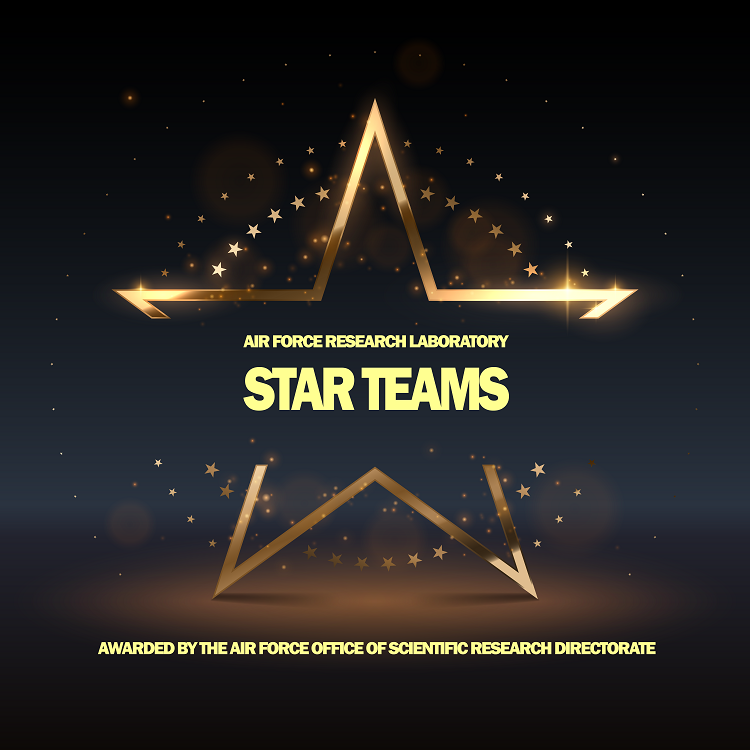 The Star Team awardees have been focused on AFRL’s increased survivability and lethality through aggressive and extended maneuverability, developing a new class of high-mass ionic liquids to potentially increase thrust and partnerships and computational mathematics to elevate the complexity of physics in vehicle design, Welsh said.

The 2023 winners represent two AFRL technical directorates that are at the forefront of innovation.

“We are excited to acknowledge these teams who epitomize our role in the larger [Department of the Air Force] ecosystem,” said Dr. Timothy Bunning, chief technology officer, AFRL. “Teams, working on very difficult problems which underpin some of the long-term needs of the DAF, leveraging and sitting at the cutting edge of the large [Science and Technology] ecosystem is a primary role of the Air Force Research Laboratory.”

While AFRL does fund research, Bunning said the lab’s primary job is to grow future Air Force and Space Force thought leaders who directly interface with industry and academia and government.

“Internally, we recognize these teams as the best-of-the-best, and my kudos to their team members and leadership chains for recognizing and valuing high-quality in-house activities,” Bunning added.

AFRL’s research covers three main areas, or building blocks, in the evolution from scientific discovery to providing critical technologies to the DAF and the nation: basic research, applied research and advanced technology demonstration. AFRL/AFOSR’s management of the basic research portfolio and investment in new science knowledge inside and outside of AFRL is the critical first step on a path to innovation.

This research effort is accomplished by the AFRL workforce of about 11,500 military, civilian and contractor employees, who lead the discovery, development and integration of affordable warfighting technologies for our air, space and cyberspace forces.

The Air Force Office of Scientific Research, or AFOSR, expands the horizon of scientific knowledge through its leadership and management of the Department of the Air Force’s basic research program. As a vital component of the Air Force Research Laboratory, or AFRL, AFOSR’s mission is to discover, shape, champion and transition high-risk basic research that profoundly impacts the future Air and Space Forces. AFOSR accomplishes its mission through global investment in advanced discovery research efforts in relevant scientific areas. Central to AFOSR’s strategy is the transfer of the fruits of basic research to industry, the supplier of Department of the Air Force acquisitions; to the academic community, which can lead the way to still more accomplishment; and to the other directorates of AFRL that carry the responsibility for applied research leading to acquisition. Visit Air Force Office of Scientific Research at: https://www.afrl.af.mil/AFOSR/.