Garmann, a senior research aerospace engineer, is an expert in the modeling, simulation, and behavior of air flows and their effect on the control and performance of aircraft. His work impacts vehicles from across the spectrum, from unmanned aircraft systems, to fighter jets, to hypersonic platforms.

“There is an urgent need to accurately and effectively predict the complex unsteady aerodynamic interactions that ultimately translate into increased system risk and cost, as well as diminished performance,” Garmann said. “To discover, harness, or prevent such interactions is what will enable truly revolutionary future Air Force capabilities. Our group is addressing this pervasive challenge, and I am incredibly proud to be part of something so important to our Air Force mission.”

Throughout Garmann’s career, he has focused his work on aerodynamics and its effect on aircraft. Recently, he characterized for the first time the near- and far-wake behavior of wingtip vortices in flight conditions, providing critical insight into optimal formation flight. This research contributes to greater fuel efficiency, enhanced structural integrity, and improved controllability for groups of aircraft flying in formation. His efforts in this area have played an instrumental role in projects such as the Surfing Aircraft Vortices for Energy, or $AVE, program.

Garmann also pioneered the development of robust, versatile, and massively parallel numerical simulation techniques for unsteady flows. This work has broadened the types of technologies that can be simulated with AFRL in-house tools and has increased the speed, accuracy, and reliability of high-fidelity simulations.

In addition to his current work in computational aerodynamics, Garmann also serves as principal investigator for an internationally-recognized group designated as an Air Force Office of Scientific Research Star team. This honor recognizes excellence in basic research and is bestowed upon no more than 10 percent of AFRL research activities.

He has also reached across industry, academia, and government to consult and collaborate on technical issues. Garmann represents AFRL externally on three national technical committees, and has been named an associate Fellow of the American Institute of Aeronautics and Astronautics. A recognized subject matter expert, he actively seeks to advance the body of knowledge within the scientific community, both within and outside the government sector.

“I am honored to have been selected as a PECASE recipient,” Garman said of the award. “It is incredibly humbling to have been considered amid all the amazing young researchers at AFRL and across the nation.” 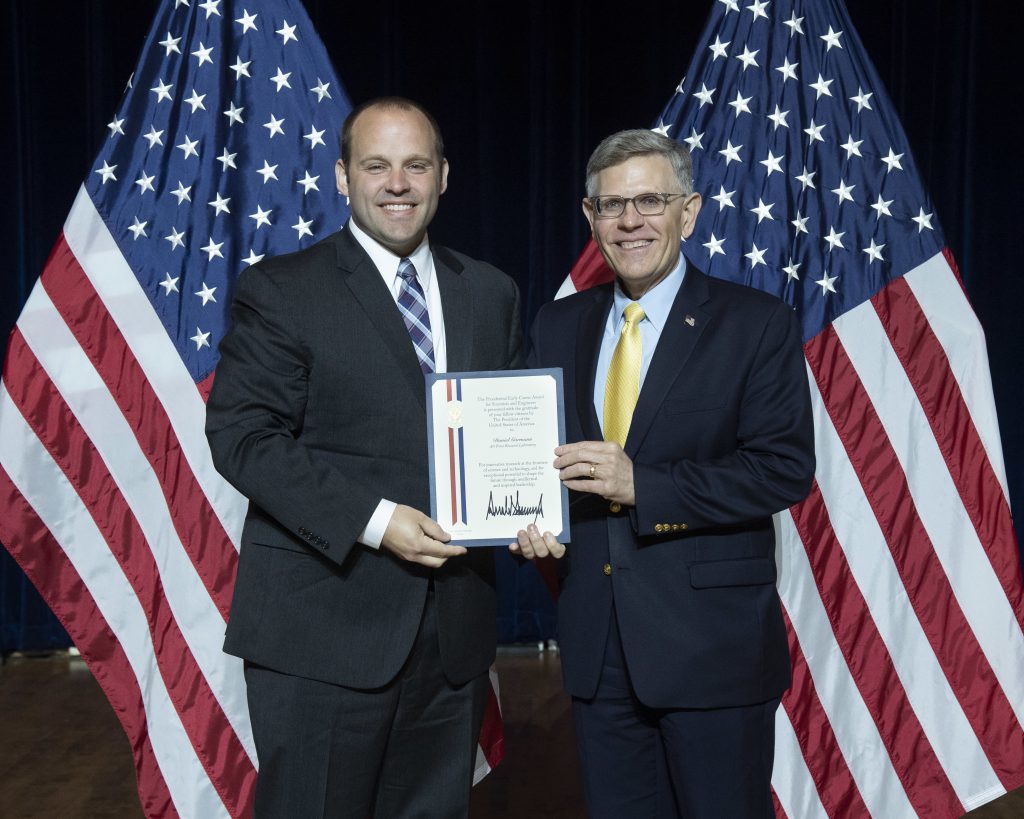 Dr. Daniel Garmann (left) received the Presidential Early Career Award for Scientists and Engineers from Kelvin Droegemeier, director of the Office of Science and Technology Policy, at a July 25, 2019, ceremony in Washington, DC. (U.S. Department of Energy Photo/Donica Payne)