WRIGHT-PATTERSON AIR FORCE BASE, Ohio – When NASA astronauts Doug Hurley and Bob Behnken ascended into space on the afternoon of May 30, they were two of 10 astronauts to undergo centrifuge testing in early November 2018 in the Air Force Research Laboratory.

“It’s exciting that our centrifuge was one of several steps along the way to prepare these two astronauts for this upcoming launch,” said Brig. Gen. James Dienst, 711th Human Performance Wing commander. “AFRL’s experts and unique capabilities in human physiology seamlessly translate into the Space domain, and we are honored to be part of our country’s historic moment.”

This centrifuge is the DoD’s only human-rated centrifuge, and it was designed to be agile and rapidly adaptable for any possible customer. Nearly two years ago, NASA was its first customer outside the DoD.

The agility of AFRL’s centrifuge rests in its interchangeable cockpits. The AFRL-NASA discussion began a few months prior to testing. Engineers from both teams began working to transform the centrifuge, more commonly used for fast-jet pilot training, into a system for astronaut testing.

“We were able to give NASA engineers 3-D models of the gondola in our centrifuge and then they designed their cockpit displays,” explained Scott Fleming, 711HPW centrifuge program manager. “We only had to add one shim and shave off an edge of one of the 50 manufactured parts; it was nearly an exact fit.”

For aircrew training, the centrifuge allows students and USAF fast-jet aviators the capability to experience up to nine Gs, or nine times the normal force of gravity, to teach the effects of G-forces on human physiology. Also, it allows for the measure of the flyer’s ability to counteract the effects and prevent G-induced loss of consciousness.

These tasks, performed 18 months ago, were part of the testing that each astronaut had to accomplish as the centrifuge spun. They also had pre- and post-test questionnaires as well as NASA physicians, who also conducted pre- and post-medical exams to bookend their centrifuge spins.

NASA’s relationship with the Air Force dates back to Project Mercury, the first human spaceflight program in the United States, which spanned from 1958-1963 and saw names such as Alan Shepard and John Glenn, among others.

Kevin Rusnak, AFRL senior historian, discussed the history of centrifuges in North America as well as the historical partnership the Air Force and earlier, the Army Air Corps, has had with astronauts and the space program.

“Dr. Harry Armstrong was the first to build a centrifuge back in 1935 for the then Army Air Forces, and as far as we know, he was the first to build one in North America,” explained Rusnak. “He had the shops (at was then Wright Field) construct it to do the first aeromedical testing and is considered the father of aviation medical research.”

A second centrifuge was built and used through World War II, but then a third was constructed at Wright-Patt and used to test and select astronauts for Project Mercury in the late 1950s, Rusnak explained.

“They ran all the astronauts through the testing right here on base,” he said. “Then based on the tests that were run, the Air Force recommended the seven candidates to be accepted for the Mercury program. Those are the ones we now know as the ‘Mercury Seven’ astronauts.”

A couple more centrifuges followed and have been used for a variety of things from testing the endurance of people to the forces of acceleration to the comfort of pressure suits and space suits, Rusnak said. “What happens when you’re wearing a 50-pound space suit and you’re going at four Gs and the suit is pressing against your skin? Researchers at the Air Force Research Laboratory and now the 711th Human Performance Wing ask questions and develop solutions. Like—‘How can that suit be constructed so it’s more comfortable for the astronauts’ and ‘Are they still mobile – can they reach up and flip switches?’”

These questions apply to Air Force pilots too, he explained. “If you’re flying at a high speed or you have to eject, how can your body sustain the G load and what kind of equipment can AFRL and more broadly, Air Force, provide these pilots to protect them when they’re going at these rates of speed? All this can be tested on our centrifuge.”

Fast forward to what is the next generation of space travel; centrifuge testing and training still remain crucial to both safety and human performance.

“In this new era of commercial space, where you have commercial space companies that are tasked to provide a service, but they may not have that depth of background in physiology—that’s where I think NASA steps in and uses its history and its relationships to make sure that their astronauts, when they use commercial space vehicles, are adequately prepared for what they are going to experience,” explained Boeing Astronaut Chris Ferguson during the 2018 testing.

NASA astronaut and physician Michael Barratt, who also is a Wright State University alum and worked with AFRL researchers for his master’s thesis, discussed the new space vehicles, the different experience of G-forces in these vehicles in comparison to a high-speed jet, and the importance of readiness during their 2018 visit.

“We’re starting to fly these new vehicles that are very different from the space shuttles, said Barratt. “The shuttle had a very gentle G-profile both upward but especially downward. The new commercial space vehicles – the SpaceX Dragon, Boeing Starliner and even the new Orion – we’re back in the family with the Mercury, Gemini and Apollo era where we had much higher G-forces in both ascent and entry.”

Barratt explained that during those [earlier] programs, NASA used centrifuge training both for preparing the astronauts to feel those G loads and to work and learn how to operate under them, but also to inform design, and cockpit strategies and operations.

“With the new vehicles back in the family with those G loads, we’re basically reviving that whole G training aspect and every astronaut will start going down this path,” he said. “This is our pathfinder effort – our first time to start spinning people with the G loads of the new vehicles.”

“Who knows where this will lead,” said Ferguson in 2018, “but I think it’s a pretty darn good start.”

Fast-forward 18 months, and this AFRL-NASA partnership as well as this historic launch marks another chapter in the long-standing relationship that dates back to the days of John Glenn, who also trained and tested with Air Force aerospace physiology experts and equipment. 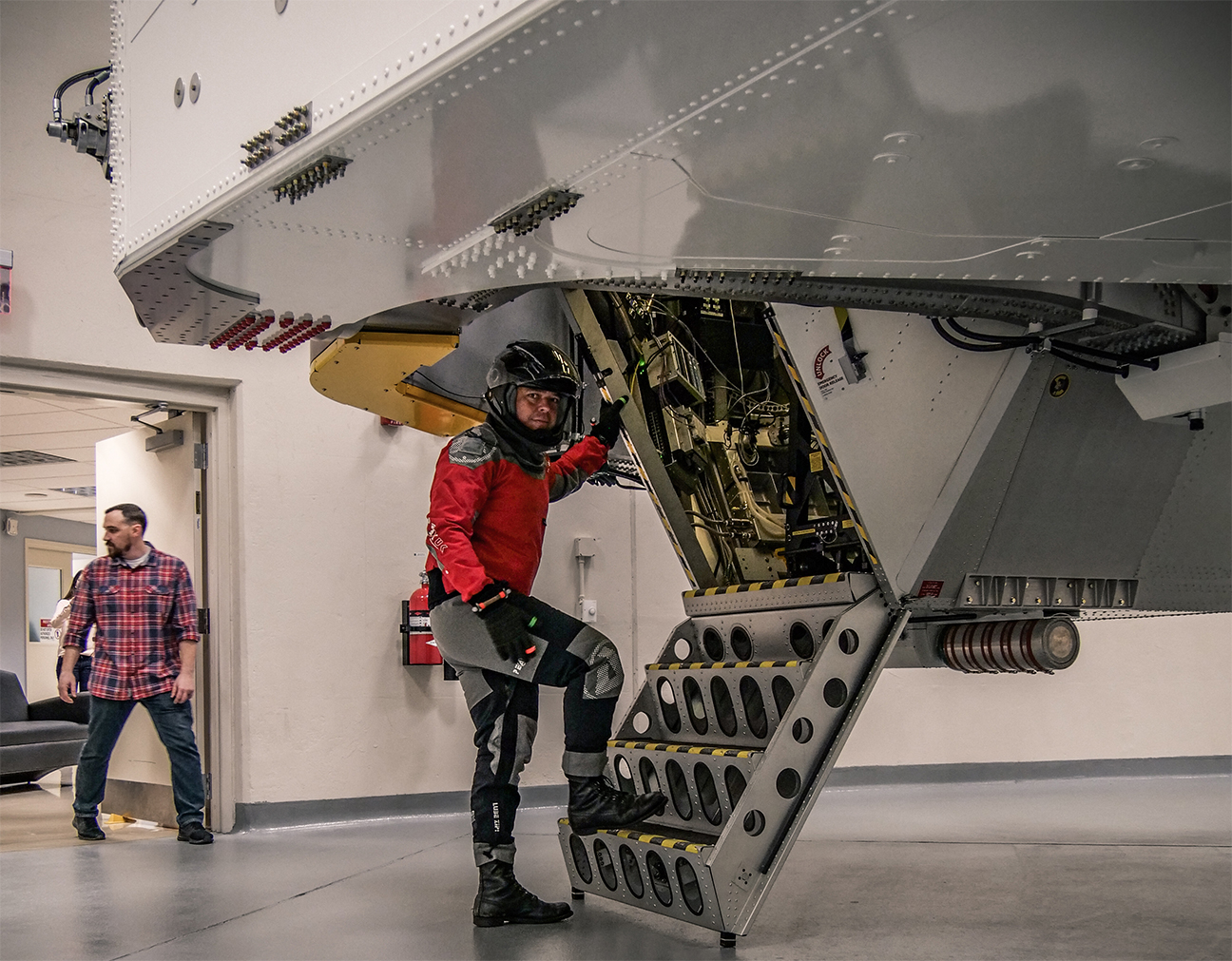 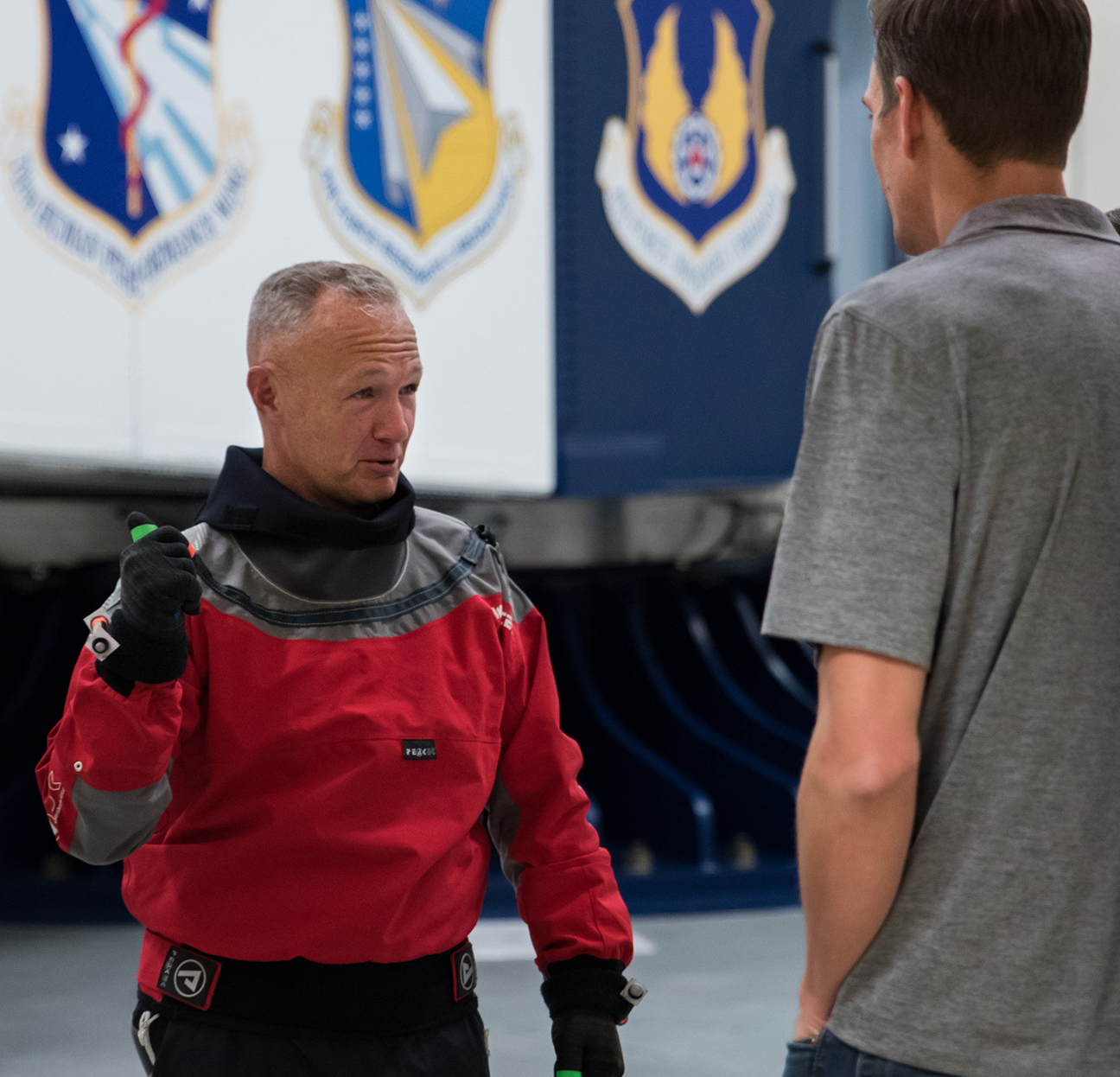 NASA astronaut Douglas Hurley speaks with a NASA engineer just before getting into the Air Force Research Laboratory’s centrifuge. Ten astronauts participated in the testing Nov. 1 and 2 – one with Boeing and nine with NASA. (U.S. Air Force photo/Richard Eldridge) 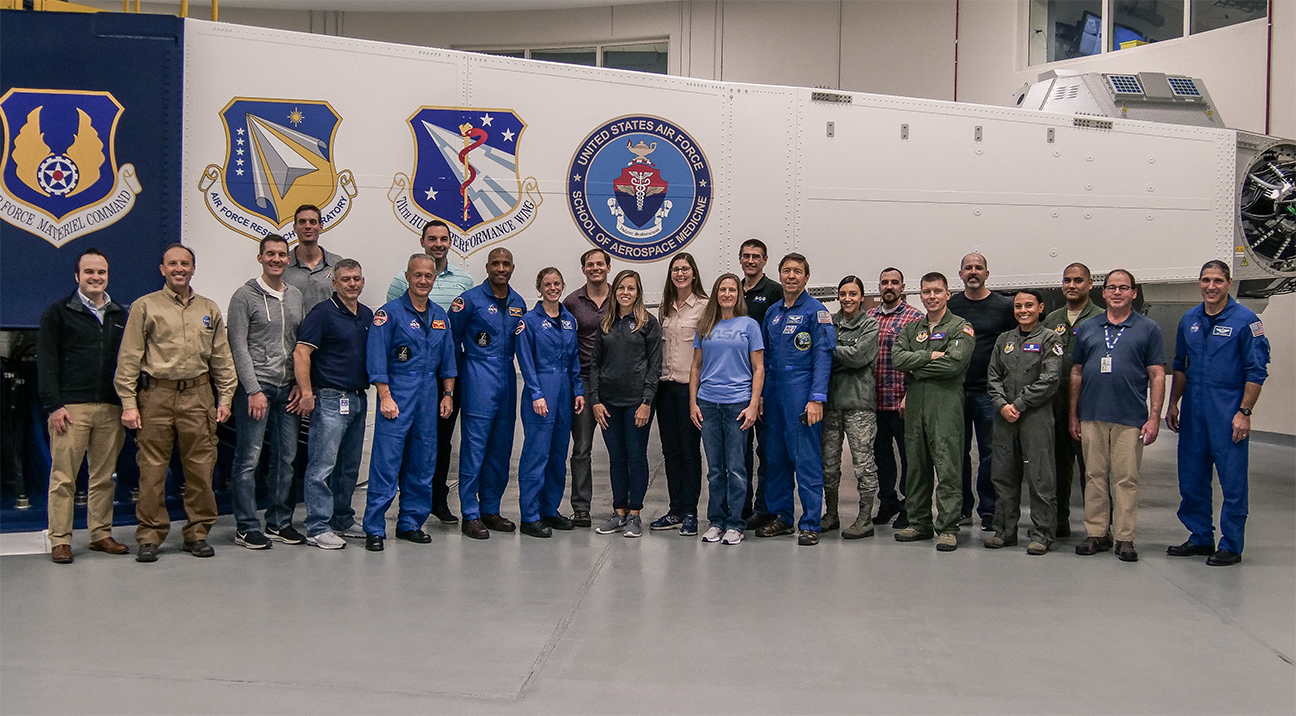 During the two-day testing with NASA and Boeing astronauts Nov. 1-2, 2018, the centrifuge spins with one of the astronauts inside. This centrifuge is the Department of Defense’s only human-rated centrifuge with interchangeable cockpits, a capability that enabled NASA and AFRL engineers to create the astronauts’ cockpit. (U.S. Air Force photo/Keith Lewis)