The Hyperdrive Space Summit is an evolution of the Hyperspace Challenge that AFRL’s Technology Outreach Office began in 2018, in collaboration with CNMI, with the goal of growing the space economy in the southwest.

Gabe Mounce, the director of the AFRL Technology Outreach Office at Kirtland Air Force Base, New Mexico and deputy director of SpaceWERX, the innovation arm of the Space Force, has been engaged in AFRL’s space technology innovation efforts since 2016. In his summit opening remarks, Mounce set the stage on the event’s purpose.

“The summit was created to include a cross section of participants comprised of small businesses, military leaders and members from the U.S. Space Force, SpaceWERX, investors and community professionals,” Mounce said. “All of these groups have an interest in tapping into the innovation and capabilities being generated in the commercial space sector.”

Mounce added that the commercial space sector is estimated to grow to $4 trillion in the next several years, dwarfing the money the federal government invests in space. He said 100,000 spacecraft are expected to be in orbit soon, exceeding previous years by a factor of 10.

“With this meteoric rise, what many call the Second Golden Age of Space, the federal government, and especially the Space Force, want to be better consumers and co-investors with industry, to tap into these huge opportunities for innovation and space capability,” Mounce said. “The Space Force needs these capabilities because the commercial sector is growing so fast, causing the space domain to be congested and increasingly contested.” 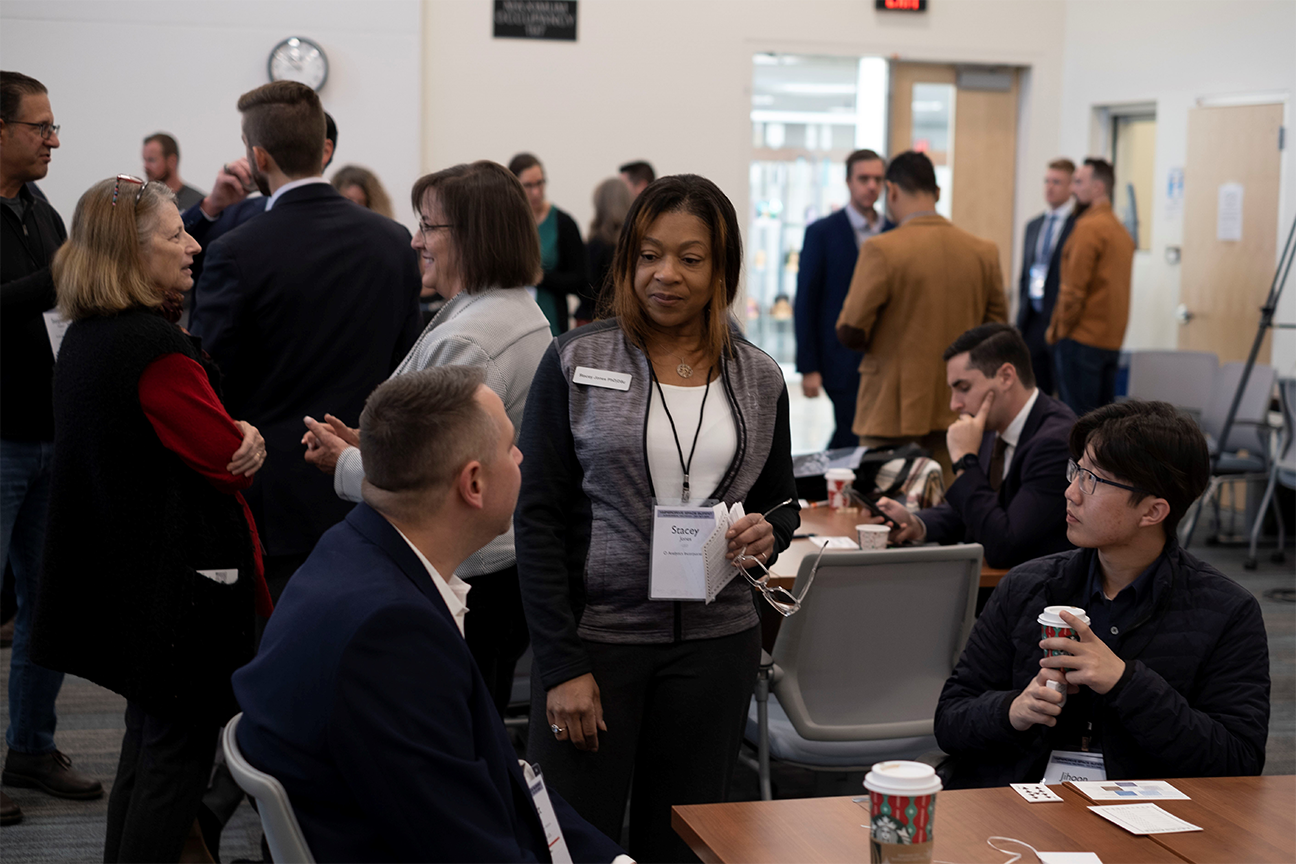 Dr. Stacey Franklin Jones, center, O Analytics founder, senior scientist and head of research, speaks with other attendees at the Air Force Research Laboratory, or AFRL, and Central New Mexico Ingenuity, or CNMI, 2022 Hyperdrive Space Summit in Albuquerque, New Mexico, Nov. 15, 2022. The Hyperdrive Space Summit is an evolution of the Hyperspace Challenge that AFRL’s Technology Outreach Office at Kirtland Air Force Base in New Mexico began in 2018, in partnership with CNMI. More than 150 space technology small businesses, academia, government and others from the space community participated in the event. (Courtesy photo)

Kathy Steen, CNMI senior program manager for the Hyperspace Challenge, led the summit that included more than 150 participants from space technology small businesses, academia, government and others from the space community. Participants included those that took part in previous Hyperspace Challenges and new invitees.
“The challenges focused on matching pressing AFRL and Space Force needs with innovative technologies from teams not yet familiar with government contracting, in which the winners received funding to begin the government acquisition process,” Steen said. “This year we brought together 85 teams to network with government researchers, industry experts and investors to connect and deepen collaboration efforts to further their visions and mission needs.”

Steen added that the Hyperdrive Summit is a celebration of five years of AFRL and SpaceWERX in their technology scouting and acceleration activities.

Mounce and Steen agreed the summit exceeded expectations, which were set higher than previous Hyperspace Challenges. Mounce said the goals achieved are:

“This summit was hugely important as we brought together companies that have previously found a mission-fit via the Hyperspace Challenge or Catalyst Space Accelerator, both integrated into SpaceWERX’s tech scouting operation; the Q-Station Soft Landing program which enables small businesses to tap into the growing New Mexico space economy; and the Ignitor, a new incubator partnership with NewSpace New Mexico, to aid small businesses in growing their technical and investment readiness nationwide,” Mounce said.

Mounce added that these groups along with private sector investors, government representatives, and the broader technology community enabled collaborative opportunities and private-public partnerships that are the first step toward the relationship the USSF is fostering to leverage fast-growing commercial capabilities.

“Based on the current trajectory, the commercial space economy will continue to drive most of the innovation happening in space,” Mounce said. “The summit validated the predictions for the growth of the space economy despite a recent worldwide economic slowdown. Space is now truly for everyone.”