WRIGHT-PATTERSON AIR FORCE BASE, Ohio – AFRL is turning up the heat!  A state-of-the-art Air Force Research Laboratory testing capability for new additive manufactured heat exchangers (HX) is now up and running and is already providing AFRL’s Maturation of Advanced Manufacturing for Low-cost Sustainment, or MAMLS, program with valuable data on the advantages and limitations of producing fuel-oil coolers, a type of heat exchanger, via additive manufacturing (AM), also known as 3D printing.

MAMLS, a congressional-funded program managed by AFRL’s Materials and Manufacturing directorate and executed through America Makes Manufacturing Institute, is focused on helping the Air Force apply additive manufacturing and other emerging advanced technologies for continued, low-cost effective maintenance and sustainment of legacy aircraft. The average lifespan of an Air Force aircraft is 27 years, and critical parts are often out of production due to obsolescence, cost to create, and low quantity requirements. Additive manufactured parts, including fuel-oil coolers, can help the Air Force circumvent these obstacles.

The MAMLS project to develop AM fuel-oil coolers is led by the University of Dayton Research Institute with partners DRT Aerospace and General Electric. UDRI has received three completed fuel-oil coolers to date, and testing is underway to evaluate pressure drop, flowrate, and inlet/outlet temperatures of the additively manufactured coolers, while collecting fuel and oil line particulates for further analysis.

“Additive manufacturing is enabling fabrication of heat exchangers with increased capabilities that have never been created before,” said Tim Osborn, UDRI Project Lead. “To evaluate the performance of these new designs, an improved HX testing capability was needed. This testing capability will establish a test bed for new HX designs so that the Air Force can evaluate manufacturing and performance characteristics.”

Not only is this capability advantageous for helping to ensure legacy aircraft keep flying, it also demonstrates AFRL’s commitment to keeping the Air Force ahead of the game while practicing cost efficiency.  A facility at the AFRL Aerospace Systems directorate already had parts of a functional tester in place, along with existing technical expertise. To address the testing needs of the MAMLS project, the materials and manufacturing team worked together with experts from the Aerospace Systems Fuels Branch to complete the HX tester, providing benefits for both groups. Following the completion of the MAMLS project, the test rig will be available for government and industry to accomplish future testing of AM HX designs.

“Working together, we were able to maximize testing resources of the MAMLS program, as well as develop an enduring testing capability for AFRL and industry use in the future.  It’s truly a win-win situation,” said Marvin Gale, MAMLS Program Manager.

AFRL held a tour Nov. 6 to officially celebrate the launch of the HX test facility. 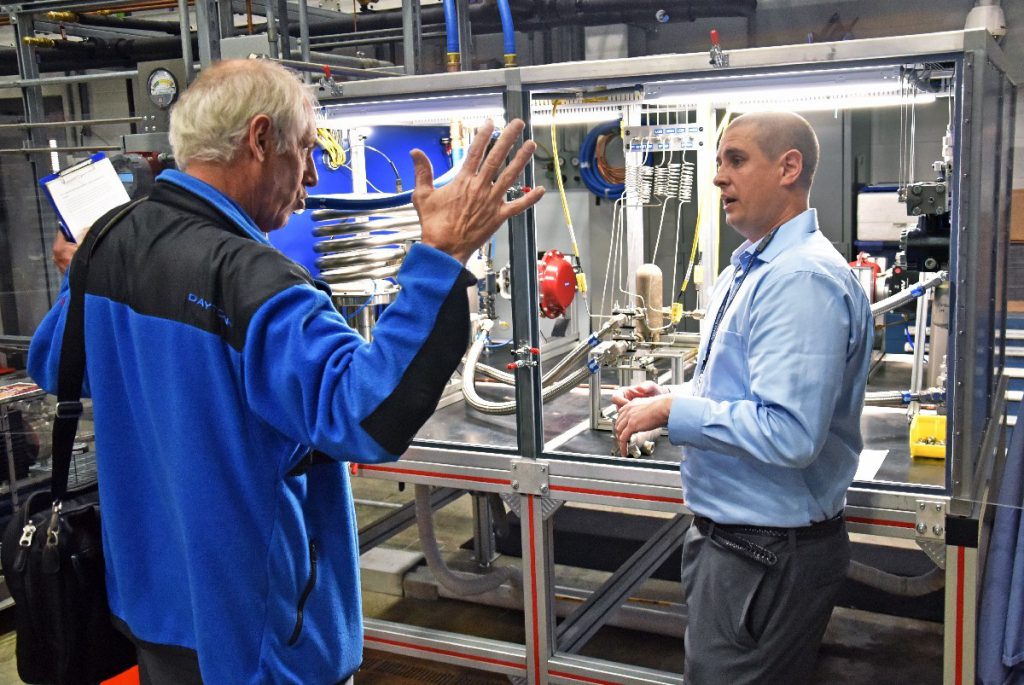