Hosted by Capt. Kelsey Pruitt and Senior Master Sgt. Starr Williams of the 88th Air Base Wing, the characteristically optimistic and engaging Pringle shared personal stories of how she came to “lead with the heart” and understand the power of perseverance and embracing change while balancing the responsibilities of being a leader, scientist, woman and mother.

“If any of you are in a position where you are one of a kind and no one has blazed that path before you, it’s going to be hard; it might even hurt a little,” she said. “But by sticking together and hanging in there, it’s important that we keep trying, that we make it better for those that follow us, and that we make it a positive change so that it’s easier the next time around.”

Echoing the International Women’s Day 2021 theme of “Choose to Change,” she cited Air Force Chief of Staff Gen. Charles Q. Brown, Jr.’s motto to “Accelerate Change or Lose.” Her opening comments underscored the importance of serving others while leading by making a change, supporting a change, or being a change in whatever way big or small.

She applauded the Air Force Women’s Initiative Team, a grassroots, volunteer effort, that has been successful in working to make changes to policies that affect female Airmen. With regard to supporting change, she shared a memory from her deployment in Afghanistan of gathering with female officers and enlisted servicewomen from 11 countries to show camaraderie to the first female general in the Afghan Army.

“We’re going to be the strongest if everyone has the opportunity to be their best,” Pringle said. “We need to take advantage of all the talent that’s out there. Inclusion is all anyone wants—to be at the same table having the same opportunities. This is true for every single group that’s out there. That’s why sticking to those core values: integrity, service, and excellence as well as respect in all we do is important.”

Pringle attributed her high regard for these values to her upbringing in a supportive family. She paid homage to the grit and perseverance passed down to her from her great-grandmother Fern, who had been a turn-of-the-century homesteader and young schoolteacher in rural Wyoming. She also revered female leaders such as Generals Janet C. Wolfenbarger (ret.) and Ellen Pawlikowski (ret.) and male leaders Gen. Larry O. Spencer (ret.) and, to a great extent, former Air Force Chief of Staff, Gen. Mark Welsh (ret.), whom she once served as executive officer.

“I really benefitted from their perspectives. They definitely shaped my leadership style, and I’ve grown at every step of the way,” Pringle said. “And, frankly, I’m still growing, still learning. My leadership has evolved and changed over time.”

Referencing the impact of early motherhood, she said she carried this into her first pregnancy, fearing she’d be seen as failing the mission.

“Some people have thoughts about what your performance can or could be just based on the bump that you have,” she said. “So, I think that might have been why I felt compelled to do my best maybe to overcompensate, to prove the opposite of that, that I wasn’t slowing down, that I was pushing as hard as ever.”

But she contemplated a choice between professional challenges and comfort 10 years into her Air Force career, toying with the idea of getting out of the service. During a horse ride in the Wyoming plains at the time, her uncle gave her some advice that would lead to her now 30-year career.

“He said, ‘You’d be crazy to leave the service so early. What kind of career gives you these opportunities to see the world, to make a difference, to work with amazing people?’ And I have to tell you, I never looked back after that. I made the decision right there and then that I was going to be a lifer and stay as long as I could to make a difference and as long as my family supports it.”

By her third pregnancy years later, she was proud to be pregnant and used it as a way to connect with the Air Force Security Assistance Center squadron she commanded at the time. Immediately following this assignment, and in the final months of her pregnancy, she attended the National War College.

“I felt compelled to make a positive difference, to blaze a trail for anyone who would want to follow in my footsteps and show that it’s not a challenge to be pregnant and attend school and you can find the balance going through. It was an honor to be able to help other women and give them the opportunity.”

While acknowledging the difficulties of being a working mother, she also highlighted the benefits of working mothers to an organization.

“It’s a perspective raising kids that helps us deal with personnel challenges that are inevitable in any team, and it allows you to be a different kind of leader,” she said. “In every single one of my past positions, I tried to get out there with the team that’s getting the job done and understand what’s on their plate, what we’re asking of them, trying to kick down a few doors for them. So, now [my style] is a little more focused on leading with heart and connecting with the team that I have, understanding what their challenges are and what’s going on in their lives so that as we, together, focus on the mission, are wholly present and able to give our best.”

With this leadership to serve she reemphasized supporting change.

“It’s important that we reach across the aisle to groups that are different from ourselves. Don’t be afraid to do so. Sometimes it’s scarier for the person on the other end than it is for us. Just go for it, and when you do that, just sit, listen and learn. The quieter you are, the more that you learn. I love the quote by former Secretary of Defense Gen. James Mattis, ‘The true testament of leadership is not just listening to other opinions but being willing to change your own views.’ So, if you add that element on top of listening, if you’re willing to change, if you have that open mind, then goodness will follow.” 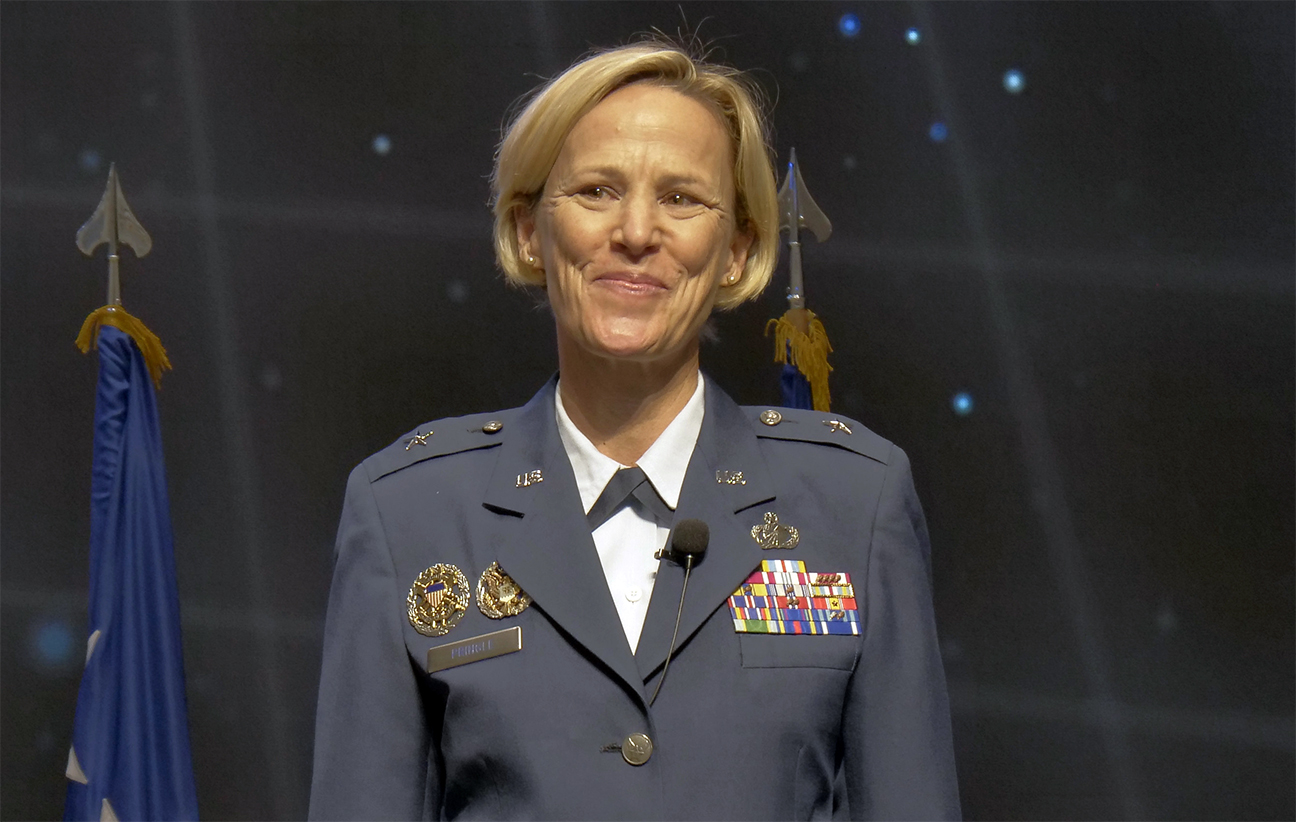