WRIGHT-PATTERSON AIR FORCE BASE, Ohio (AFRL) – The Air Force Research Laboratory, or AFRL, teamed with the Advanced Robotics for Manufacturing, or ARM, Institute to win the Defense Manufacturing Technology Achievement Award at the 2022 Defense Manufacturing Conference for the creation of an augmented reality-enabled cold spray robot, nicknamed “ARRI.”

The new system, used to apply thermal coatings to refurbish worn aerospace parts, requires a human user to look through an augmented reality-enabled Microsoft Hololens and indicate via intuitive hand gestures where a coating should be applied to a workpiece. The system will deliver significant cost savings to the Air Force, improve weapon system readiness, decrease maintenance downtime and improve material application accuracy. 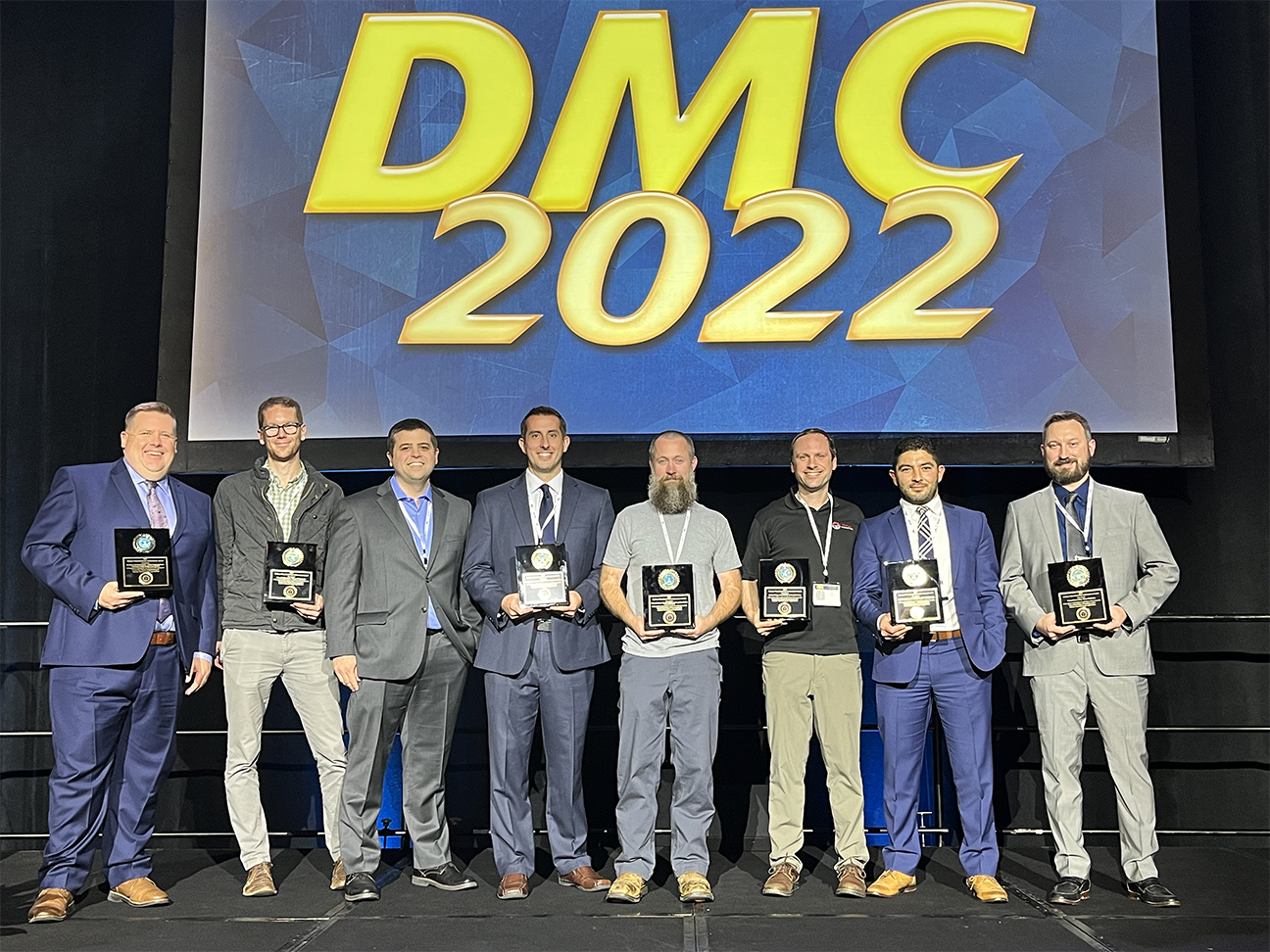 “This was an all-star team. I’m very proud of them,” said Harry Pierson, AFRL senior general engineer and senior technical adviser in the Digital Manufacturing and Supply Chain branch. “I’m delighted they were recognized for their great work.”

The Defense Manufacturing Technology Achievement Award is given annually to teams that demonstrate significant achievements in world-class manufacturing technology capability. According to the ARM Institute, team awardees demonstrate both technical accomplishment and an ability to “affordably meets the warfighter’s needs throughout the defense acquisition lifecycle.”

“It was clear to us [when we began the project] that the technology we were creating would have wide-reaching impact in enabling the proliferation of flexible robotics,” said Stuart Lawrence, president and CEO of Titan Robotics, Inc., a private company based in Pennsylvania. “Our mission and goals as a company have always been highly aligned with AFRL, the USAF and now the ARM Institute as we continue to mature and transition the technology into new applications like cold spray while building new capabilities like ARRI.”

“We developed a technology that helps robots function in highly variable environments,” Pierson said. “We thought, let’s develop an interface that lets the operator walk away and the robot does the work.”

Historically, cold spray robot users were required to create a specific computer-coded program for every individual part slated for refurbishment, a process that could take weeks. Now, Pierson said, ARRI can complete the cold spray application process in minutes. The addition of augmented reality to the machine eliminates the need for custom robot coding driven by each individual component and its wear state, resulting in significant time and cost savings.

“More applicants will be able to utilize this advanced technology without having years of training in specialized skills, [which lowers] the hurdles to robotic automation,” Lawrence said. “[ARRI provides] a safer and more attractive work environment that increases productivity and does not displace jobs.”

While the robot still requires a human operator, user training time has been reduced by 90%, from roughly two weeks to less than one day, saving $600,000 per year in depot operating costs, according to Shane Groves, robotics and automation expert at Warner Robins Air Logistics Complex.

“Initially, we performed cold spray manually, then progressed to applying it with a robot that had to be programmed for specific parts,” Groves said. “Both of those methods required significant operator evolvement and expertise. The ARRI robot allows someone with no cold spray experience to be trained in about a day. The system also speeds up the time it takes to spray, reduces fixture costs, and improves capacity.”

The process of applying thermal coatings to parts first requires the operator to use a commercially available Microsoft HoloLens to project a virtual model of the workpiece. Then, the operator drags the model onto the physical part and draws on the workpiece indicate the worn areas where ARRI should apply the cold spray, according to the award nomination.

“The robot needs to know two things,” Pierson said. “One: Where is the part? And second: where should it apply the cold spray? ARRI allows the user to show it both of these things incredibly quickly and efficiently.”

According to the 2022 Defense Manufacturing Technology Achievement Award nomination package, “Cold spray is a vital manufacturing process for refurbishing worn aircraft components which are no longer commercially available … While cold spray is the first application, ARRI is a general solution that may be applied to any robotic surface processing application, such as coating, de-painting, media blasting and sanding.”

Cold spray is an additive technology that involves firing hot metal particles at high pressure to bond them to the target, Pierson said. While the temperature of cold spray can reach up to 800 degrees Celsius, this is cold compared to other thermal spray applications that can be between 1,600 and 5,500 degrees Celsius.

FANUC Robotics supplied the industrial robotic arm for the ARRI project in partnership with the ARM Institute and Titan Robotics, Inc., Lawrence said. FANUC Robotics continues to support AFRL in other similar projects.

Pierson noted the cold spray robot’s new augmented reality capability is another tool that will allow the Air Force to continue its mission uninterrupted.

“No one is producing these parts anymore,” Pierson said. “This is going to mean huge cost savings for the Air Force.”

The Air Force Research Laboratory is the primary scientific research and development center for the Department of the Air Force. AFRL plays an integral role in leading the discovery, development, and integration of affordable warfighting technologies for our air, space and cyberspace force. With a workforce of more than 11,500 across nine technology areas and 40 other operations across the globe, AFRL provides a diverse portfolio of science and technology ranging from fundamental to advanced research and technology development. For more information, visit: www.afresearchlab.com.