The three-day conference featured speakers from across the Department of the Air Force along with technical sessions, panels and a technology exposition where AFRL highlighted several areas including the four Air Force Vanguard programs, COVID-19 response efforts, innovative capabilities for base defense, palletized munitions, and several avenues for sharing ideas or capabilities with the lab.

“Strategic competition is the significant challenge facing our nation today and this applies to the world of Air Force and Space Force science and technology,” Pringle told reporters during a media roundtable. “Our strategic competitor has the goals, the personnel and the resources to challenge us, and so what I’m here to say is that the Air Force Research Lab is ready to meet those challenges head on.”

Fitch added that during his interactions with the workforce, he has noted “the great minds at AFRL understand the strategic competition that we’re facing … they understand the goal, where [the technology] is at and what they have to do to get us there [to a capability]. They want to deliver the right technology to the warfighter,” he said.

“We’ve been looking forward to this time together for the past two years… and we appreciate all of you adhering to the safety and health precautions amidst this continued pandemic,” Murray said referring to the vaccine and mask requirements imposed on attendees. He specially welcomed the U.S. Space Force Guardians calling them “integral and essential member[s] of the Air Force Association Family.”

Murray’s opening remarks, which echoed others made during the conference, highlighted the “incredible strategic competition” that the nation is facing noting that “our Air and our Space forces are indispensable to securing American interests and freedom at home and abroad.”

He emphasized that “events like this one are about … understanding the real threats . . . and the most effective solutions to counter those threats,” highlighting that “free exchange of ideas fuels innovation by “providing active engagement and exposure to new people and technologies.”

Kendall highlighted the need to “make smart choices about our Air Force and Space Force investments” to ensure that our nation is best equipped to protect its national interests against a “well-resourced, thoughtful and strategic opponent.”

After stressing the need to explore “technologies like autonomy, artificial intelligence, advanced microelectronics, data analytics, and the doors they can open for us,” Kendall asserted that “innovation should be harnessed to specific operational performance requirements” to ensure that we “get meaningful military capabilities into the hands of our operators.” Speed and efficiency in delivering “real military capability” is critical, he said since “only the Air and Space Forces have the ability to confront and defeat aggression immediately, wherever it occurs.”

Air Force Chief of Staff Gen. CQ Brown, Jr. expanded on his message of “Accelerate Change or Lose,” stressing the need to “transform our culture to one that values innovation, collaboration and accountability.”

After discussing the challenges that the DAF is currently facing and the threats posed by our strategic competitor, Brown touched on real opportunities for the future.

“We have the greatest Airmen and the best defense and tech industry in the world, he said emphasizing the need to “work together to accomplish what seems impossible.” Success is attainable “through collaboration with both traditional and emerging industry opportunities, he said.

Chief Master Sgt. of the Air Force JoAnne Bass, who delivered keynote remarks and awarded the Airmen of the Year awards echoed Kendall’s and Brown’s sentiments, stressing that future conflict will differ greatly from that of the past.

“The high-end fight that we must prepare for could be unlike anything we have ever faced in our history,” she said noting that while tough times are ahead, she is equally inspired by Airmen and Guardians alike, calling them “the future of our force” and encouraging the audience to prepare to think critically and protect our long-term national security. “We are indeed at that inflection point in history, where the choices we make today will have lasting impacts on the world we have tomorrow,” said Bass.

“We have been building this service from day one purpose-built to compete, deter and win against a growing threat,” he said stressing that “the ability to protect our own capability and generate space superiority despite attack is critical.”

During an AFA panel discussion titled ‘From Acquisition to Lethality,’ Pringle built on DAF senior leaders’ statements alongside Gen. Arnold Bunch Jr., commander of Air Force Materiel Command; Lt. Gen. Duke Richardson, military deputy for the Office of the Assistant Secretary of the Air Force for Acquisition, Technology and Logistics; and Randy Walden, director and program executive officer for the Rapid Capabilities Office. Led by AFA President, retired Lt. Gen. Bruce “Orville” Wright, the discussion focused on how the DAF is delivering joint lethality in all domains to ensure the U.S. military is fully equipped to deter and win contested fights against its strategic competitors.

Pringle called the lab’s approximately 6,500 personnel — 700 of whom are Guardians, the “technology brain trust of the Department of the Air Force.” Our workforce “tackles tough problems from artificial intelligence to hypersonics, microelectronics all the way to quantum computing. But . . . it starts and it ends with warfighters in air and in space,” she said.

Pringle explained how scientists and engineers “are going out into the wild” to “understand the challenges that [operators] face,” ensuring meaningful capabilities are developed and delivered.

“You are going to see [S&Es and operators together] at the Nellis Air Warfare Center…working side by side at NORTHCOM, understanding the problems in Northern Edge…at the Catalyst Campus in Colorado Springs working with Guardians, and at the Pentagon working side by side with Air Force Futures,” she explained.

“One of the most important things that we’ve done recently is partnering with our acquisition professionals . . . ensuring that technologies are delivering on faster timelines,” Pringle said highlighting how “this approach holds us to quicker timelines, helps us … accelerate technologies, deliver them at scale and sustain them in the future,” she explained. “By partnering with acquisition, we help bridge the Valley of Death even quicker than what we have in the past.”

This unique approach has guided DAF Vanguard programs like Navigation Technology Satellite-3 (NTS-3), Rocket Cargo, Golden Horde and Skyborg, all of which AFRL featured in its booth at the technology exposition. Personnel from across the lab provided information to attendees on these technologies and other innovative programs, including palletized munitions, base defense efforts, various avenues for connecting with the lab such as AFWERX, SpaceWERX and the Tech Connect website; plus the lab’s COVID-19 response efforts (the Epidemiology Lab, Aircraft Decontamination team, medical and infectious disease control experts and Defense Production Act or DPA Title III team).

“You will never meet a more passionate group of people dedicated to serving warfighters than the folks at AFRL,” said Pringle. “We love what we do, and we love to serve.”

AFRL SMEs interacted with various individuals who stopped by the booth including Vice Chief of Space Operations Gen. David D. Thompson who paused to discuss NTS-3, the DAF Vanguard program pushing the boundary of today’s position, navigation and timing technology via an experimental navigation satellite.

“The big thing with NTS-3 is that looking at ways of making GPS more robust, more resilient and adding some flexibility will help us meet the technical challenges of tomorrow and make us more competitive with our adversaries,” said 1st. Lt. Charles Schramka, the program’s deputy principal investigator.

Skyborg, another Vanguard, is an autonomy-focused capability for unmanned vehicles. The program is a game-changer that will enable the DAF to operate and sustain low-cost teamed aircraft, thwarting adversaries with quick, decisive actions in contested environments. AFRL highlighted its recent successful operational experimentation efforts which resulted in flying the Skyborg Autonomy Core System (ACS) on two different aircraft in the span of two months.

A featured technology experimentation effort, Rapid Dragon, a partnership between AFRL’s Strategic Development Planning and Experimentation Office, AF Futures, Air Force Special Operations Command and Air Mobility Command, illustrates how the lab is helping to provide capability to the warfighter at the speed of need. In less than 20 months, the team went from idea on paper to operational testing, ultimately demonstrating an affordable way to airdrop long-range palletized munitions from existing airlift platforms, all without making significant modifications to the aircraft.

Maj. Steve Lauver, an Air Force Academy graduate and a trained pilot, spoke with conference attendees about AFWERX, part of AFRL and the innovation arm of the DAF, which transitions agile, affordable and accelerated capabilities by teaming technology developers with Airmen and Guardian talent. As the division chief for AFWERX’s Spark, the inward talent-focused program, Lauver highlighted the various opportunities available in terms of training, development and networking.

“We are all about giving Airmen and Guardians the tools that they need to innovate effectively,” he said noting that these opportunities are critical to ensuring that the DAF can think critically and “do a better job of understanding and integrating technology” into warfighting operations.

Alan Albert and Capt. Haji Dunn answered questions regarding the DPA Title III Program and its role in increasing the production of critical medical resources and mitigating economic damage to the domestic industrial base amid the COVID-19 pandemic. While Title III investments promote national defense capabilities, they also help reduce the reliance on foreign supply chains, ensuring secure, reliable access to critical items necessary for our national defense capabilities.

Visit www.afresearchlab.com/technology/ to learn more about these technologies and programs as well as other S&T efforts from across the lab that are enabling the DAF to address strategic competition. 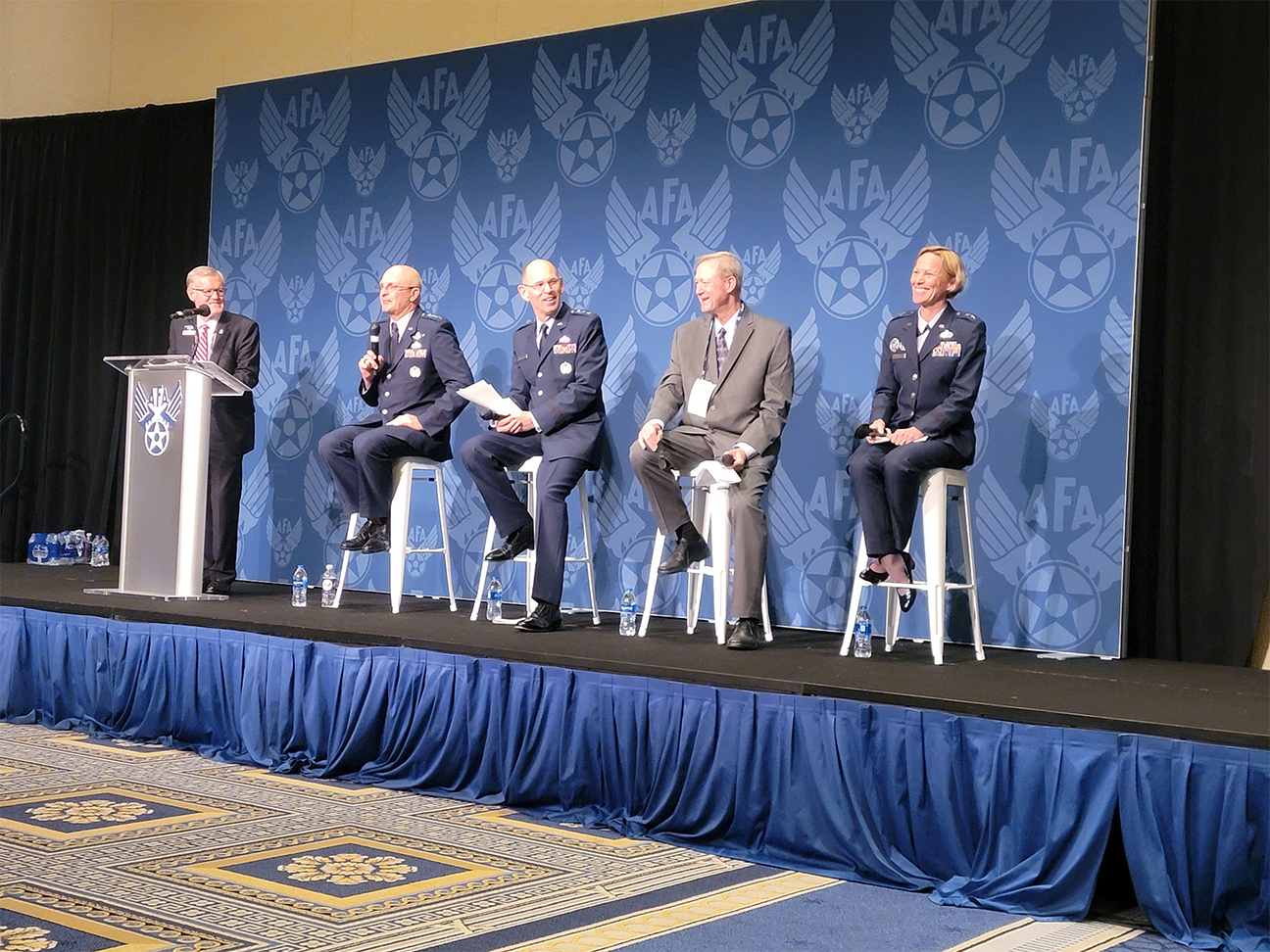 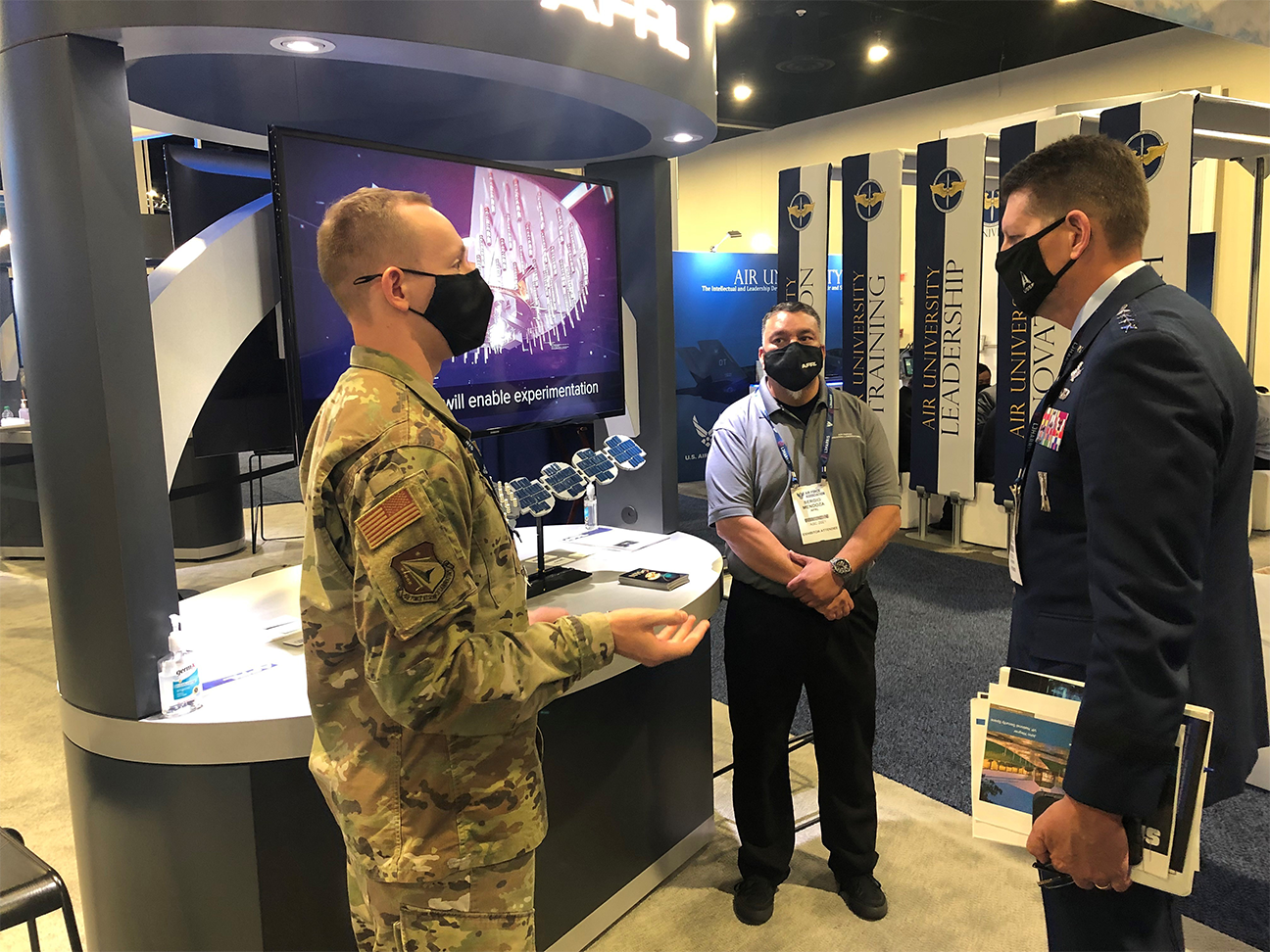 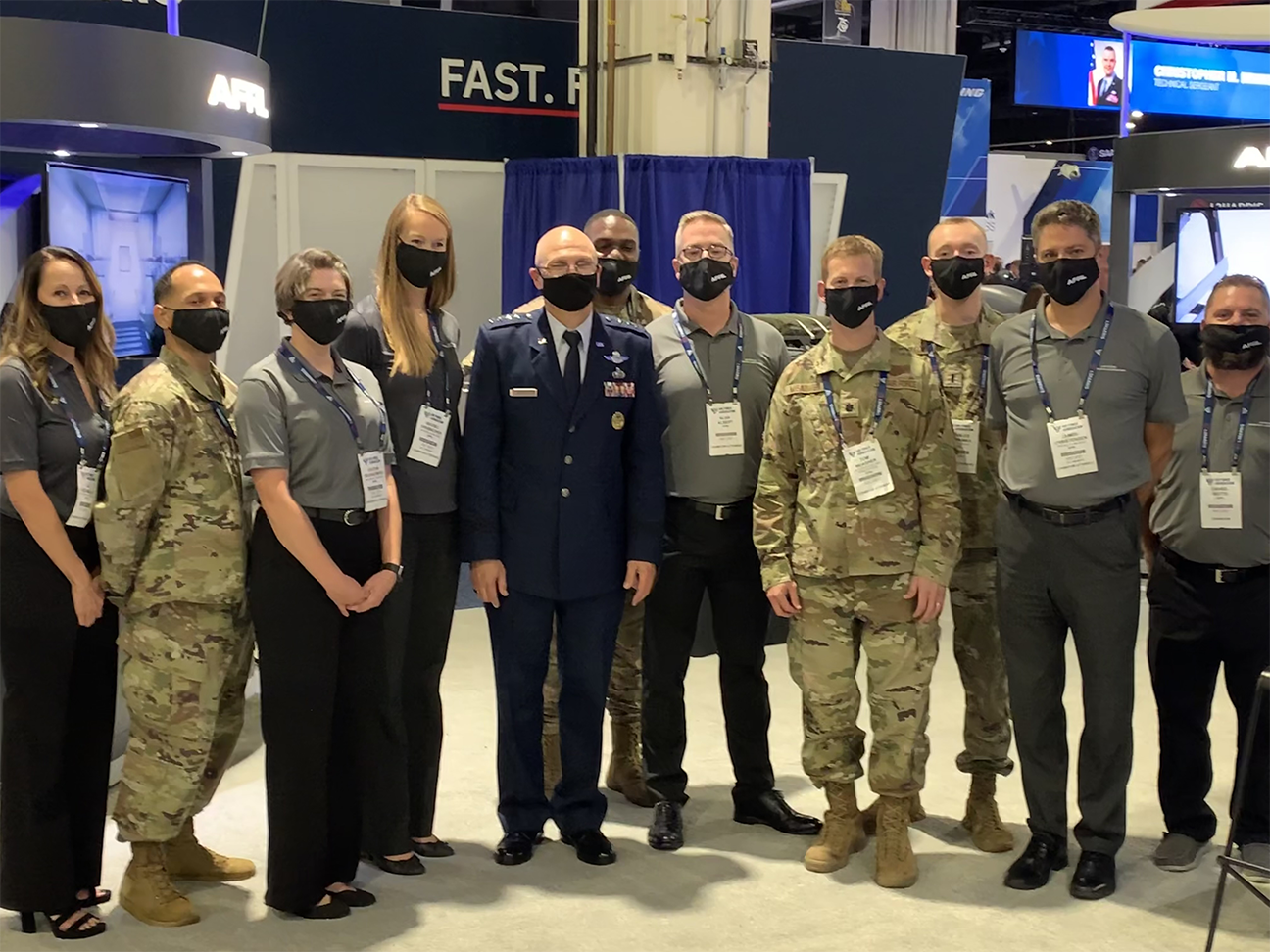 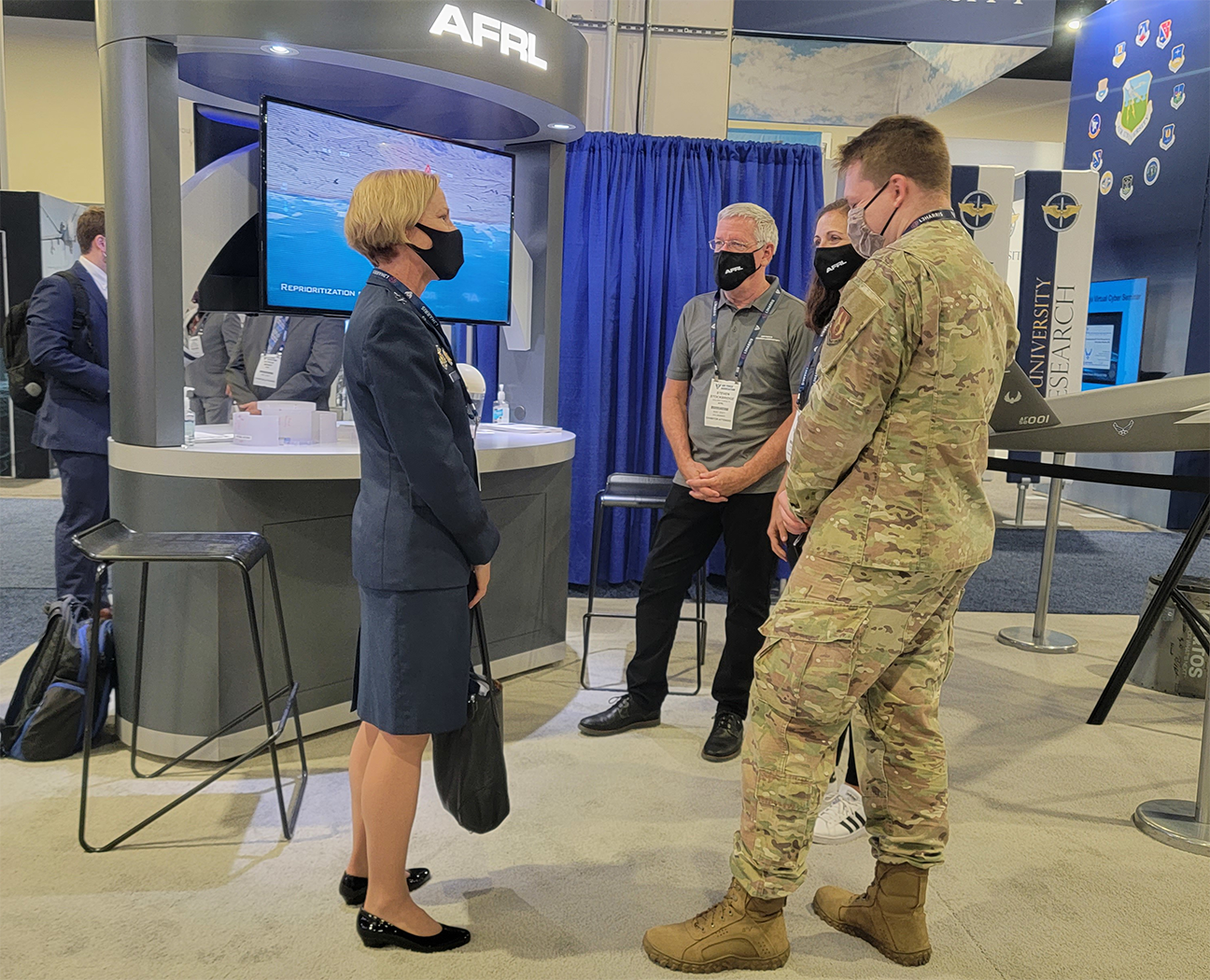 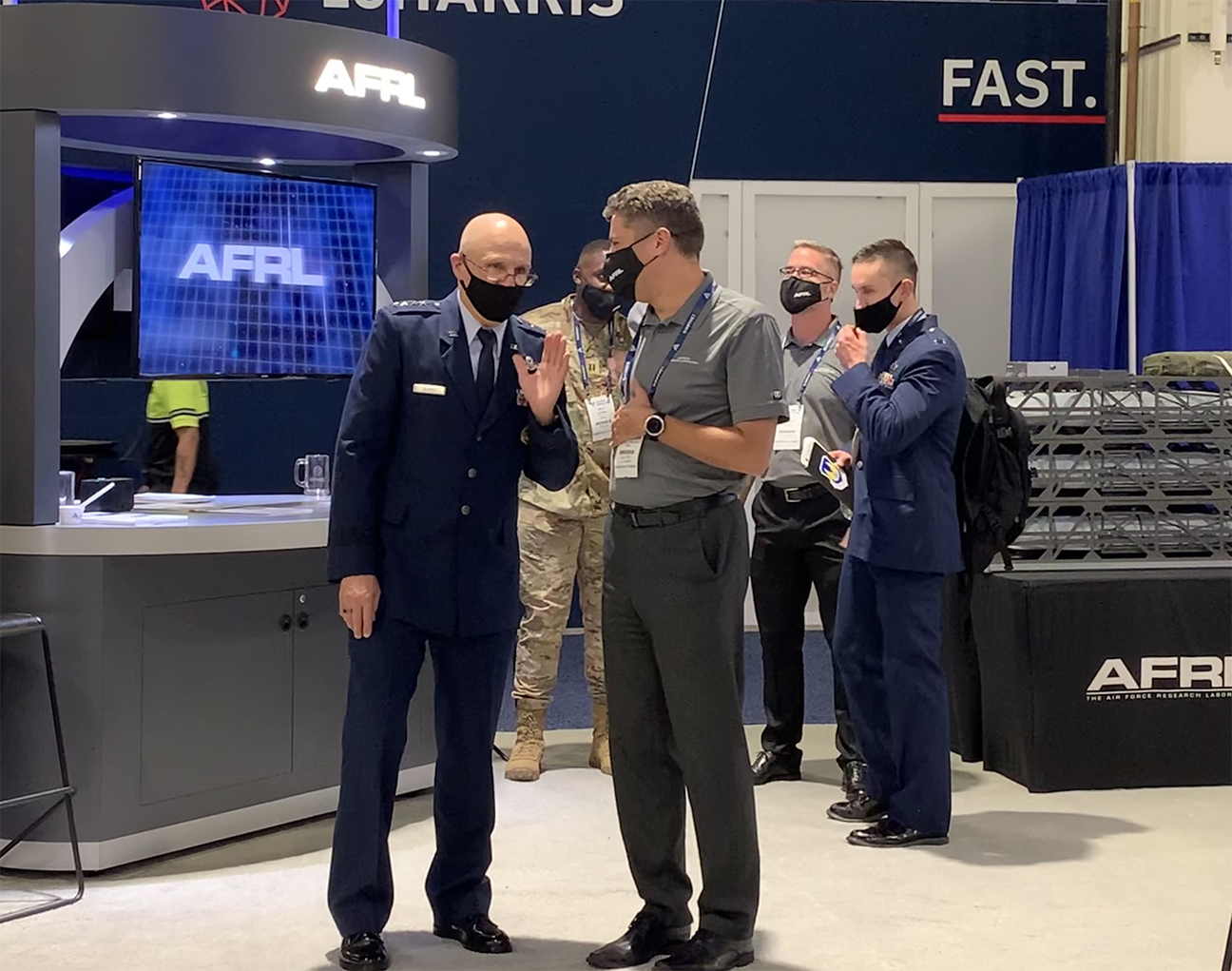