The agreement focuses on advancing the readiness skills and competency of Air Force medical personnel who provide training on safe and effective care for patients who require urgent/emergent care under austere conditions.

Cadre members from the United States Air Force School of Aerospace Medicine, which is part of the 711HPW, joined Kettering Health Network officials at the Indu and Raj Soin Medical Center in Beavercreek, Ohio for a signing ceremony, where the final signature was applied by Todd Anderson, Executive Vice President for Kettering Health.

Air Force personnel from USAFSAM’s En route Care Training Department staff may now work with civilian doctors, nurses and technicians within the Miami Valley by leveraging Kettering Health Network expertise in all aspects of the healthcare continuum. The synergy will enhance the understanding between military and civilian healthcare organizations, and support the commitment to advancing quality healthcare and education.

“This clinical integration strategy will ensure that these ready-to-go medical Airmen will continue to deliver medical care during times of peace, and will be medically current in a time that the country requests their specialized skills to be utilized,” said Col. Alan Guhlke, Chair, En Route Care Training Department at USAFSAM.

About 50 medical professionals from the 711HPW and USAFSAM will benefit from the new agreement, according to Maj. Jeffery Marsh, Director of Technical Operations at USAFSAM’s En Route Care Training Department.

“Our mission at Kettering Health Network is to improve the quality of life in communities we serve through healthcare and education,” said Rick Dodds, President of Soin Medical Center. “Can you think of a more appropriate fit? When you look at the appropriateness of this agreement, being able to collaborate with the men and women of the Air Force is something that we are extremely humbled by and proud of. The readiness to be able to serve brave Americans all across the country and the world is something that we take very seriously.”

“The skills that our folks will be able to continue practicing while using your network is going to pay off in dividends,” said Guhlke. “What we need when we go to war is really those critical skills of taking care of super sick patients – especially trauma patients, which is the number one reason we wear this uniform as medics, whether you’re a doctor, a nurse, or a medical technician. The skills that our folks are going to be able to maintain within Kettering Health Network are going to literally save lives around the world.” 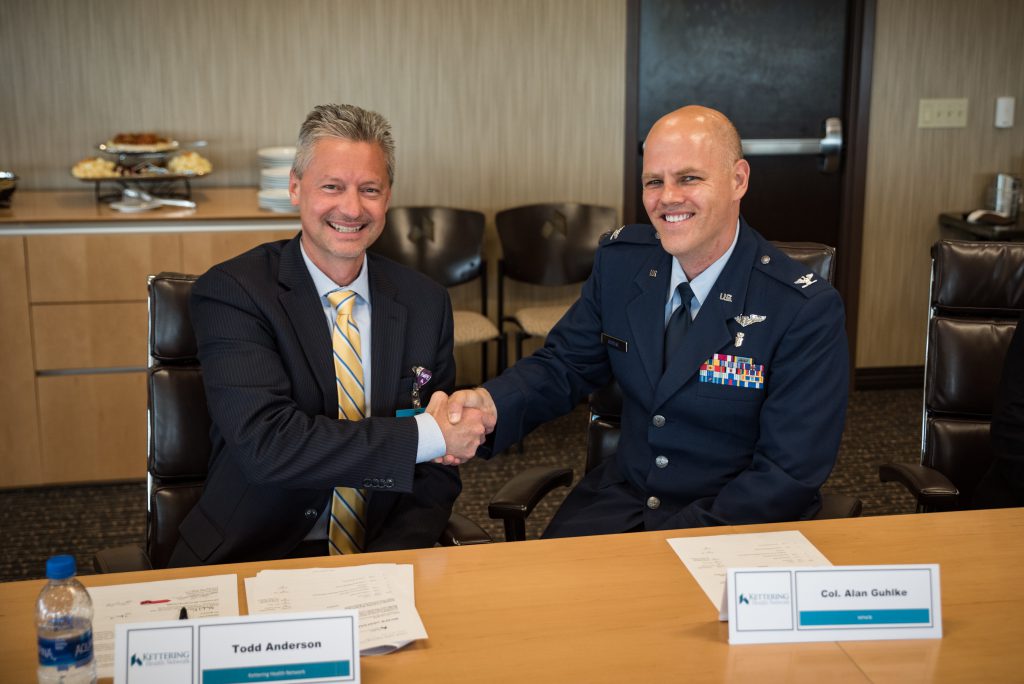