A SpaceX cargo Dragon spacecraft delivered the experiment named 16 Materials International Space Station Experiment, or MISSE-16, to the ISS July 16, 2022. It consists of materials never before tested in space and was installed onto an ISS platform called the Materials International Space Station Flight Facility during a recent extravehicular activity, where it will remain collecting data for the next six months before returning to earth in early 2023 for analysis.

“AFRL and GTRI will then study the effects of space weather exposure on the collection of heritage and novel spacecraft materials,” said Ryan Hoffmann, AFRL MISSE-16 mission manager. “NASA has been a driving force in helping to determine what materials should be flown, as well as conducting some of the preflight material characterization. DuPont supplied many of the material samples, along with providing an in-depth knowledge of material composition and space utility.”

Dr. Elena Plis, a senior research engineer at the Electro-Optical Systems Laboratory/Georgia Tech Research Institute, is the lead and primary investigator for the MISSE-16 mission and directs the goals of the multi-institutional research team.

“We will investigate selected materials which show promise for aerospace, avionics and spacecraft applications in low-Earth orbit, which is a particularly harsh environment for spacecraft materials,” Plis said.

“MISSE-16 will leverage the GTRI’s expertise in several areas of high importance to space research,” Plis continued. “The data collected will aid in the development of technology to image spacecraft through the atmosphere using ground-based telescopes and will help to track hazardous space debris that is typically very dim and difficult to keep track of.”

In addition, Plis said the project will help open the door to determine the composition of space objects like those present in a debris cloud. This includes development of algorithms for imaging through atmospheric turbulence and tracking in low brightness and development of modeling tools for identifying materials undergoing space weatherization.

“The data we will receive directly from the ISS has never been collected before, and there is an aspect of machine learning required to turn the raw data into a useable format,” Hoffmann said. “In our AFRL lab, we perform imaging of the materials using a camera and illumination scheme identical to that installed on the ISS. These data serve as training datasets for the machine learning algorithms developed by GTRI’s team for analysis of the materials degradation under true space weather.”

AFRL anticipates several important benefits for the U.S. Space Force resulting from this project will also be valuable to the space industry and the space enterprise in general.

“This project will help to provide an understanding of how a variety of novel materials react to the harsh space environment,” Hoffmann said. “If they are deemed suitable for flight, the properties of these materials will help to improve the reliability and sustainability on any space platform and mission that platform supports.”

Hoffmann explained for the first time ever, MISSE-16 will provide real-time data on how a material degrades in the space environment.

“These data will be used to design and validate ground-based testing methodologies so that new materials can be flown with higher confidence and reliability and a much lower cost,” he said. “This will lead to a more agile space enterprise that is able to take advantage of state-of-the-art materials rather than the current model of flying only materials that have flown before.”

“Characterization of spacecraft materials, both classic and modern, is key to supporting space flight, mitigating the growth of orbital debris, and supporting material identification for space situational awareness,” Cowardin said. “Laboratory measurements provide a direct opportunity to assess optical parameters in a controlled environment to better ascertain the material response in harsh environments to compare with in situ measurements, such as with MISSE.” 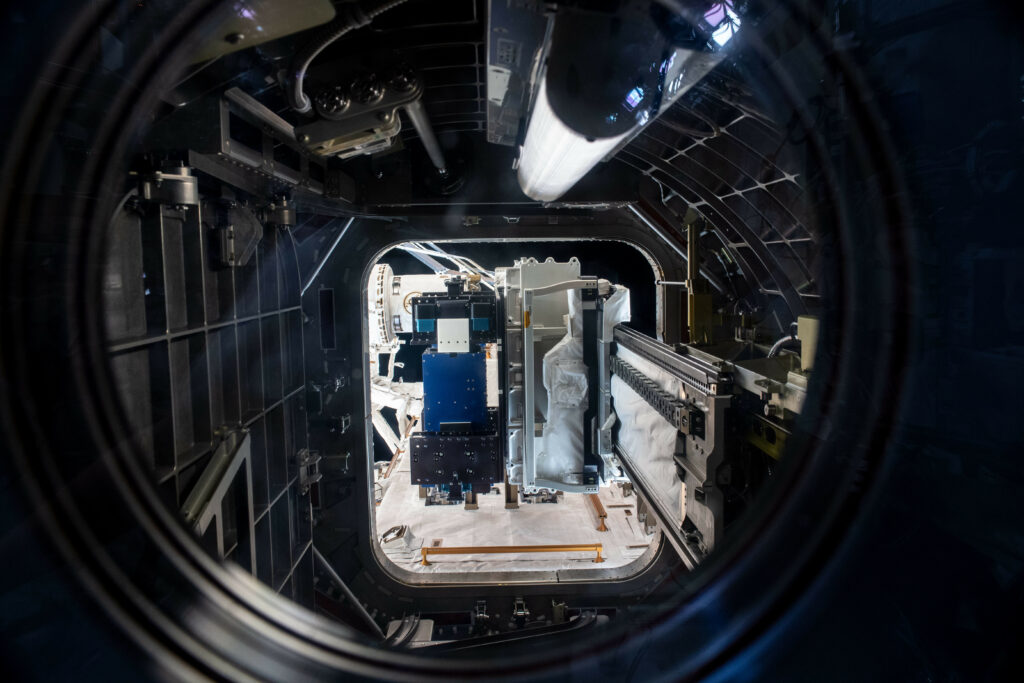 Materials International Space Station Experiment, or MISSE, shown in the blue panel on the airlock slide tray, at the International Space Station, as the Special Purpose Dexterous Manipulator grapples it. The MISSE space flight experiment is a collaboration among the Air Force Research Laboratory, NASA, Georgia Tech Research Institute and DuPont to study the effects of space weather on spacecraft materials. (Photo credit / NASA) 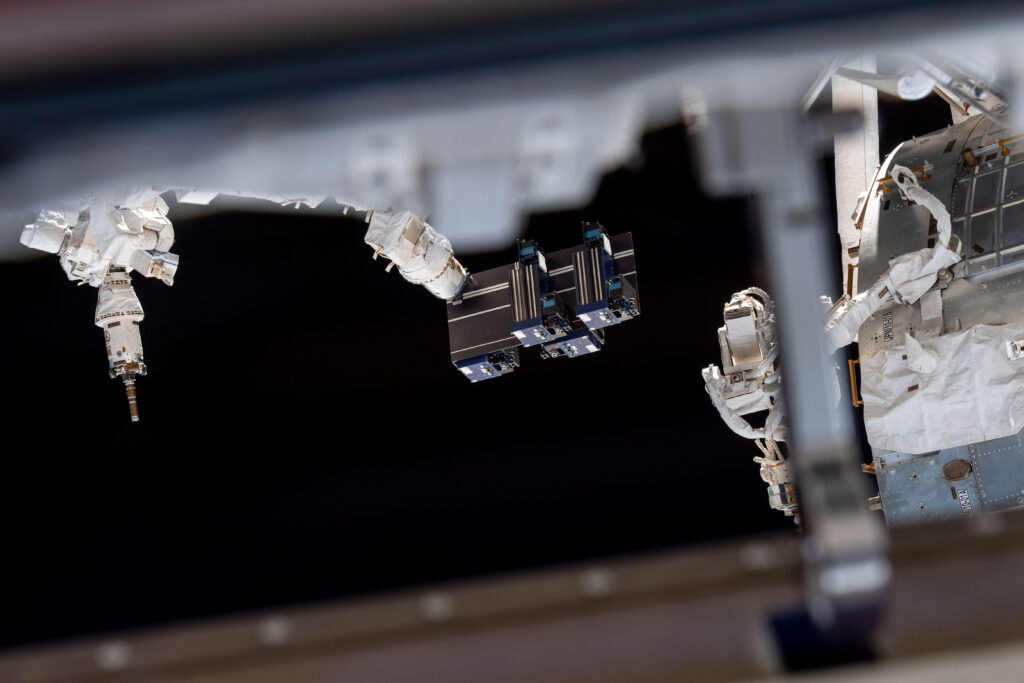 Materials International Space Station Experiment, or MISSE, in the grasp of the International Space Station robotic Special Purpose Dexterous Manipulator. Mission Control personnel on Earth used a robotic arm to relocate MISSE from inside the Japanese Experiment Module airlock to its installation locations on the exterior of Space Station. The MISSE space flight experiment is a collaboration among the Air Force Research Laboratory, NASA, Georgia Tech Research Institute and DuPont to study the effects of space weather exposure on spacecraft materials. (Photo credit / NASA)