KIRTLAND AIR FORCE BASE, N.M. — Air Force Research Laboratory scientist Dr. Robert Johnson has won the most prestigious science and technology award in the U.S. Air Force – the Harold Brown Award. The award is given annually to a scientist or engineer who uses scientific research to solve a problem critical to the needs of the Air Force.

In a ceremony held on Nov. 21 at Kirtland Air Force Base, N.M. and presided over by Dr. Richard Joseph, Chief Scientist of the Air Force, Johnson was presented a trophy and a certificate signed by the Acting Secretary of the Air Force Matthew P. Donovan and the Chief of Staff of the Air Force Gen. David Goldfein.

“Dr. Johnson is most deserving of this recognition,” said Joseph. “I was particularly struck by the leadership he brought to his team – great leaders magnify the work of a team and for that reason alone Dr. Johnson deserves this award.”

AFRL Commander Maj. Gen. William Cooley made the announcement to his workforce in an email announcement on Nov. 14.

“Dr. Johnson is leading the way for our Air Force with cutting edge research and is an example to scientists and engineers across the lab,” said Cooley.  “Dr. Johnson was selected for this prestigious award for outstanding contributions including identifying a breakthrough in physics that enables high-resolution ground to space imaging. His contributions provide optical space situational awareness techniques found nowhere else. This breakthrough has provided the U.S. military with a decisive advantage in space surveillance.”

Johnson is a principal investigator at AFRL’s Starfire Optical Range (SOR) located on Kirtland AFB where he leads research on electro-optics for space situational awareness.

“It is an honor to recognize Rob and his team for their tremendous accomplishments in the field of adaptive optics and sodium guidestar development,” said Dr. Kelly Hammett, AFRL’s Directed Energy Director. “The results of their research is being transitioned across the nation and the world.”

Attending the ceremony were many of Johnson’s colleagues and his wife Dr. Bethany Kolb, a physician serving several communities in New Mexico.

“I was really in shock when I received a phone call from General Cooley that I had won this award,” said Johnson. “At first I didn’t think it was actually General Cooley on the phone. This recognition is a team effort. It’s an honor to work here.”

“I was drawn to a career in adaptive optics after my first assignment in 1993 at the SOR when I was an Air Force captain,” said Johnson. “I realized then how adaptive optics could be used to address many difficult Air Force challenges.”

Besides being drawn to a career in science, Johnson had an interest in serving in the military. “I grew up as a military brat—my dad served on active duty in the Air Force for 33 years. He’s the main reason I joined the Air Force.” Johnson retired from the military in 2005 and immediately returned to the lab in the federal civil service.

“The thing that I like most about working in AFRL is working alongside people who have decided to serve our country through research,” he said.  ‘None of us joined the military or federal service to get rich, rather we signed up to defend the Constitution. Working at AFRL gives us the opportunity to do that through science and engineering.”

“Electro-optics, and in particular adaptive optics, is important to national defense because it is a technology that uniquely solves some our most important challenges in space situational awareness,” said Johnson.

“Adaptive optics allows large, ground-based telescopes to take high-resolution photos of objects in space—these objects could be satellites, supermassive black holes, or extrasolar planets. This is the reason many large astronomical telescopes use adaptive optics today. In fact, the largest telescopes in the world, which will be built in the next several years, have been designed to use adaptive optics.”

When asked about a highlight of his career Johnson related a bittersweet event.

“On a Saturday morning in February 2003, the space shuttle Columbia flew over Albuquerque after a servicing mission to the Hubble Space Telescope. A coworker, Rick Cleis, and I used one of the telescopes at SOR to take some photos of the shuttle as it reentered the Earth’s atmosphere. Unfortunately, we took the last photos of the shuttle before it broke up. Our photo helped to explain what caused the disaster. Later, I was surprised to see our photo printed on the front page of The New York Times.”

In addition to his important research in support of the nation’s ability to operate freely in space, Johnson has several other interests.

“I love to travel and spend time in nature,” he said.  “I’m crazy about taking photos of birds, hiking, fly fishing, scuba diving, and sailing. My wife and I are planning a 21-day sailing trip to Antarctica in 2021.” 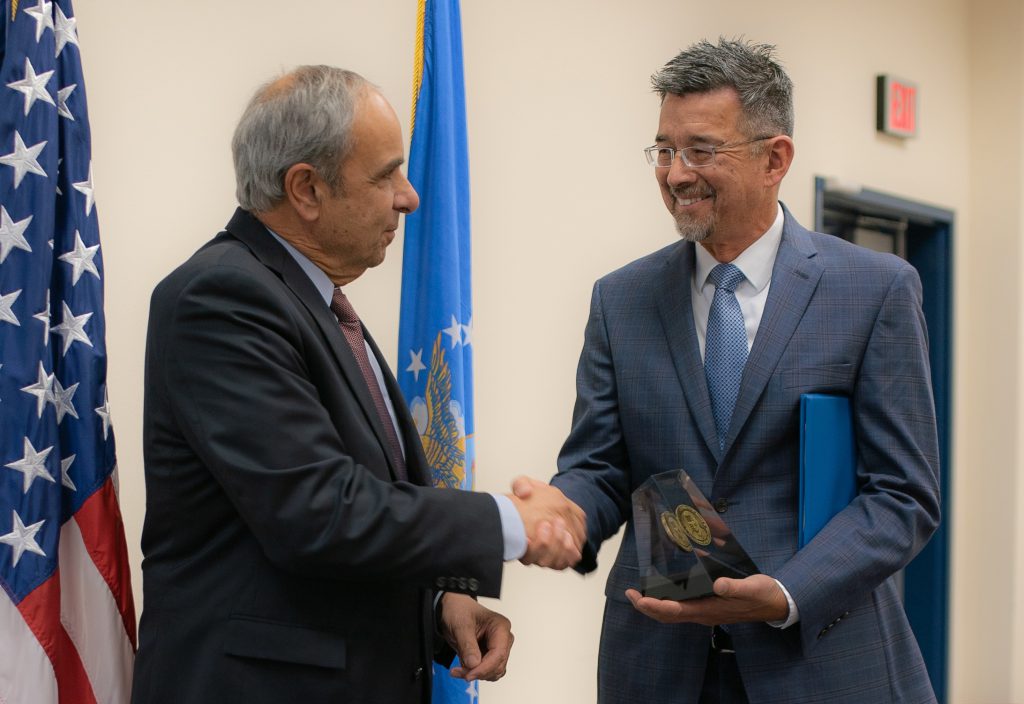