A SpaceX Falcon Heavy rocket, the most powerful launch vehicle in the world, blasted off from Launch Pad 39A at Kennedy Space Center at 2:30 a.m. EDT. It was the Falcon Heavy’s first night flight and just its third launch overall. It was also the first Falcon Heavy to fly using reused boosters.

Space demonstration of this new propellant, ASCENT, formerly known as AF-M315E, marks a major milestone in a national effort to develop new energetic propellants to replace hydrazine, the current established chemical propellant of choice for nearly all current satellite propulsion. Not only is ASCENT 50 percent higher performing than hydrazine, it is also a vastly safer alternative, allowing for streamlined ground operations relative to legacy propellants. While hydrazine is flammable, toxic, and requires use of Self Contained Atmospheric Protective Ensemble (SCAPE) suits for handling operations, ASCENT propellant requires minimal Personal Protective Equipment (PPE) such as a lab coat and a splashguard for the face.

“The demonstration of a revolutionary green propellant for spacecraft propulsion is critical as we move toward space operations being the new normal,” said Dr. Shawn Phillips, chief of AFRL’s Rocket Propulsion Division at Edwards Air Force Base, California.

Also part of the STP-2 mission was AFRL’s Demonstration and Science Experiments (DSX) spacecraft. The first of its kind globally, the DSX flight experiment will conduct new research to advance DOD’s understanding of the processes governing the Van Allen radiation belts and the effect they have on spacecraft components. DSX’s elliptical path in medium Earth orbit (MEO) will increase understanding of this orbital regime, and advance understanding of the interplay between waves and particles that underlie radiation belt dynamics, enabling better specification, forecasting and mitigation. This will ultimately enhance the nation’s capability to field resilient space systems, AFRL officials say.

DSX’s mission is different from most other Air Force flight experiments as it is a purely scientific mission. The spacecraft is equipped with a unique suite of technologies such as space weather sensors and graphite antenna booms used to conduct experiments with very-low frequency (VLF) radio waves. DSX has two sets of immense deployable booms due to the large antenna requirements of these experiments. One set extends 80 meters tip-to-tip and the other extends 16 meters tip-to-tip, making the DSX spacecraft one of the largest deployable structures in orbit.

“The space domain has never been more important to our nation than it is today,” said Maj. Gen. William Cooley, AFRL commander. “The DSX satellite experiment will greatly increase our understanding of the environment spacecraft operate in and will give us the knowledge to build even better satellites to protect and defend our space assets. I am immensely proud of the AFRL scientists, engineers, and technicians that conceived and built the DSX satellite.”

The DSX program is led by the AFRL Space Vehicles Directorate at Kirtland AFB, New Mexico, with key team members from the Air Force Space and Missile Systems Center. DSX will conduct on-orbit experiments for at least a year. 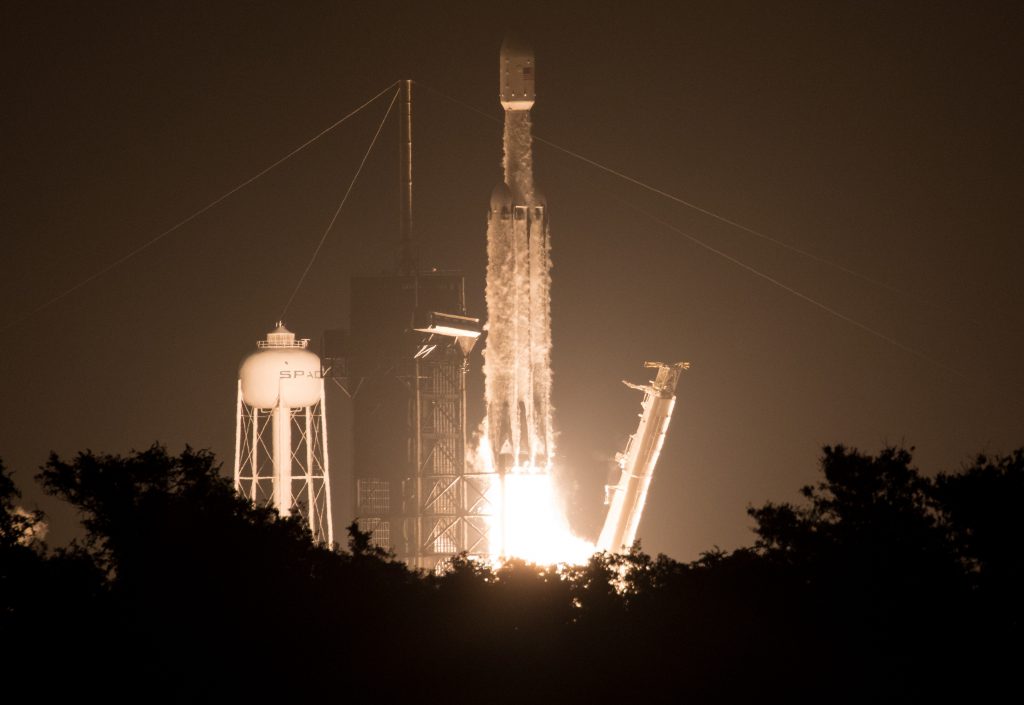 A SpaceX Falcon Heavy rocket carrying 24 satellites as part of the Department of Defense’s Space Test Program-2 (STP-2) mission launches from Launch Complex 39A, Tuesday, June 25, 2019 at NASA’s Kennedy Space Center in Florida. Four NASA technology and science payloads which will study non-toxic spacecraft fuel, deep space navigation, “bubbles” in the electrically-charged layers of Earth’s upper atmosphere, and radiation protection for satellites are among the two dozen satellites that will be put into orbit. Photo Credit: (NASA/Joel Kowsky)