WRIGHT-PATTERSON AIR FORCE BASE, Ohio – A research engineering psychologist in the Air Force Research Laboratory here began his ascent of Mount Aconcagua, the highest mountain in South America, Dec. 8 in efforts to gather data on the potential military use of altitude tents as well as the effects of altitude on cognition.

Kevin Schmidt, along with a team of researchers from academia and industry, will use various AFRL technologies and gear during the climb including the BATDOK system, GPS smart watches from the STRONG Laboratory and a cognitive task battery from the Biophysiology of Stress Laboratory, all of which are within the 711th Human Performance Wing of AFRL.

Schmidt began working for AFRL soon after completing his undergraduate degree at Wright State University. Subsequently, he was awarded a Department of Defense Science, Mathematics and Research for Transformation (SMART) scholarship and earned his master’s degree from George Mason University. He is currently working toward his doctorate at Northwestern University in cognitive neuroscience, again as part of the SMART scholar program, and is employed with 711HPW.

His doctoral research looks for ways to improve human performance as it applies to military missions. Through this research, he seeks to identify new ways to prepare warfighters for deployments in high altitude environments such as the mountains of Afghanistan or to implement cognitive tests to expand pilot training that could equip them should they experience oxygen failure in their cockpits.

And he isn’t a rookie mountain climber. Last year, Kevin climbed the highest peak in Africa – Mount Kilimanjaro – where he planted an AFRL flag.

“It was not until this expedition that the team came up with the idea to start tracking metrics and trying to merge my love of science with my love of climbing.”

Partnering with Schmidt on this next summit is Jake Quartuccio with JQ Scientific, Simone Erchov with Research Solutions Consulting, and Patrick McKnight with George Mason University.

The Air Force strives to create environments for Airmen to train how they may be required to fight. This provides the best training for real world situations. However, preparing warfighters to battle drastic changes in altitude with decreased oxygen levels, all while accomplishing various missions, is difficult to accomplish in low-elevation areas of the United States. In AFRL, researchers bring their interests in basic science into military environments, and outside-the-box thinking is encouraged.

“When we saw that there is very little information about the efficacy of a long-term training plan with the hypoxic tents (using them for months rather than days), we thought we saw a gap in the literature that we could begin to answer by developing a training protocol,” said Schmidt.

To prepare for this climb, Schmidt and his team began sleeping in altitude tents that slowly decrease oxygen levels so that their bodies could adapt to what they’ll experience on Mount Aconcagua.

Schmidt also discussed the necessity for a strong cardiovascular base. “We have been training, doing three-hour sessions on the Stairmaster with up to 70-pound packs as well as runs, bike rides and core days.”

“During the climb, we plan to continue to monitor our Sp02, subjective self-report of wellness, location as well as a battery of cognitive measures,” said Schmidt.

In a recent article on Livestrong, a clinical lecturer from the University of Edinburgh reports that “for every 1000 feet that you ascend in elevation, a loss of about 3 percent of oxygen occurs. High altitude is defined as starting at 8000 feet, where there are about 25 percent fewer oxygen molecules available per breath. This drop can have a negative effect on the body and the body must find ways to compensate for the lack of oxygen.”

This is part of Schmidt’s research as well. He will be gathering data to assess if the use of altitude tents can better prepare warfighters across all branches of the military to acclimatize their bodies to these high altitude environments.

For further information or to track Schmidt’s climb, watch the AFRL Facebook <www.facebook.com/afresearchlab> page for updates and a personalized blog on his climb. 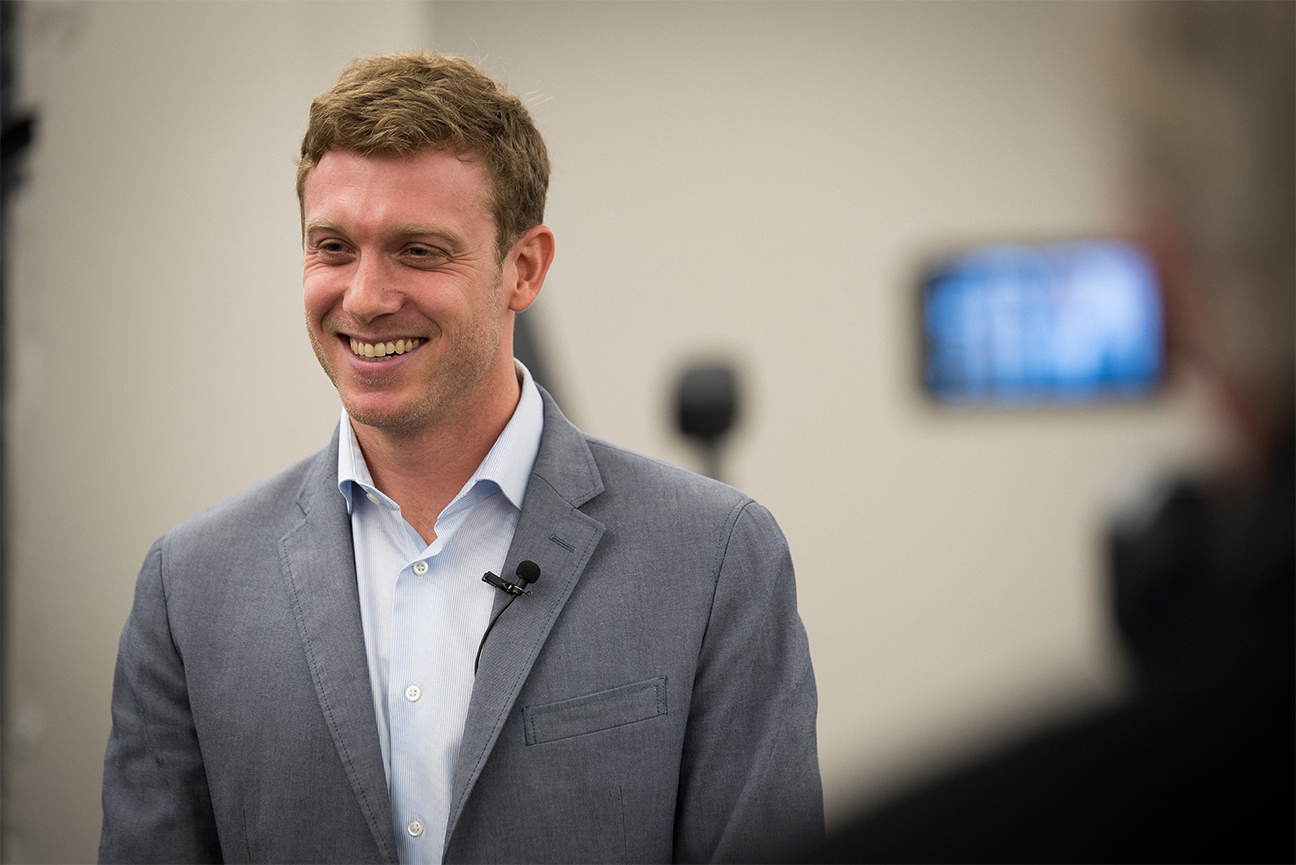 Kevin Schmidt, research engineering psychologist in the Air Force Research Laboratory and Defense Department Science, Mathematics and Research for Transformation (SMART) scholar at Northwestern University, takes some time for a quick on-camera interview to discuss his upcoming climb of Mount Aconcagua in South America. He and his team seek to identify new ways to prepare warfighters for deployments in high altitude environments. (U.S. Air Force photo by Richard Eldridge/released) 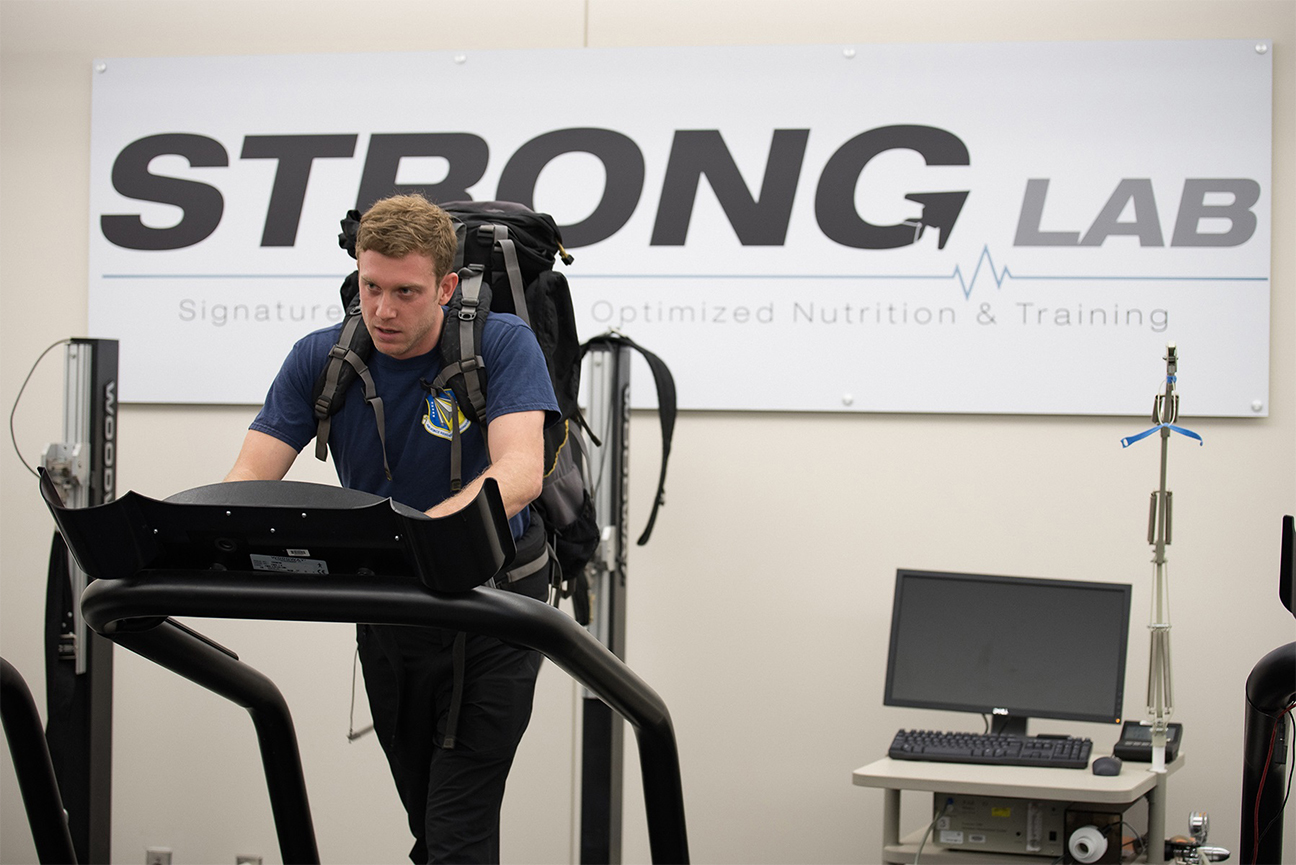 Kevin Schmidt, research engineering psychologist in the Air Force Research Laboratory and Defense Department Science, Mathematics and Research for Transformation (SMART) scholar at Northwestern University, walks on the treadmill with a 70-pound pack to demonstrate one of the ways he has been training for his climb of Mount Aconcagua in South America. He and his team seek to identify new ways to prepare warfighters for deployments in high altitude environments. (U.S. Air Force photo by Richard Eldridge/released)