WRIGHT-PATTERSON AIR FORCE BASE, Ohio (AFRL) – As the Department of the Air Force continues with the unrelenting pursuit of driving down the size, weight and power of radio frequency (RF) components, the inherent challenges in these types of technologies are compounded. The typical difficulties of making smaller mechanical and physical components, however, are dwarfed by the challenges posed by making the required onboard electronic equipment smaller, lighter, and less power-hungry.

Working toward the aim of developing game-changing RF technology, Air Force Research Laboratory scientists led by Dr. Michael Page with Dr. Piyush Shah and Dr. Derek Bas, recently patented a new tunable RF filter design that can replace the currently used YIG (yttrium iron garnet) based device. Using a layer of piezoelectric material (a material that changes shape when subjected to an electric field) coupled with a very thin film of permanently magnetized material, the new RF filter has a small fraction of the size, weight, power, and cost (SWaP-C) of the older bulkier and more expensive technology.

“The novel device in our work,” said Page, “is essentially an RF isolator.”

An RF isolator is a device that keeps unwanted radio frequency energy from reflecting back into a transmitter. This is an important factor in wireless devices like radar systems—or even cell phones—where a common component both sends and receives signals. By forcing the energy’s path to move in one direction, only, an isolator prevents signal distortion and equipment damage. This single-direction movement is known as “nonreciprocity.”

In current technology, nonreciprocity is achieved by using isolators with powerful magnets that create a strong magnetic field. Transmitted or received radio frequency energy is forced to flow in one specific direction only, which is along the direction of the magnetic lines of flux. Although this system works well, its size, weight and power requirements make it impractical for small platforms.

Page’s research team has been working on replacing these bulky, power-hungry components with miniature, energy-efficient devices based on composites of magnetic and piezoelectric materials. Isolators currently in use are about the size of a racquet ball. Not only is the AFRL-developed device one-sixth that size, but it also far exceeds the performance of current isolators.

“The core area of the science of our technology is called acoustically driven ferromagnetic resonance phenomena,” said Shah. Research was begun in this field about 10 years ago by a group of German scientists. Looking at the increased number of publications dealing with the subject in the last year alone, Shah is confident that it is getting “significant interest” in the academic community.

Page’s team reported on their research in the December 2020 issue of Science Advances, one of six respected, peer-reviewed journals published by the American Association for the Advancement of Science. In their report they explain that versions of their experimental device, an “acoustic isolator,” have been under investigation since the 1970s. However, although nonreciprocity has been observed, the observed effect was far too small to be relevant in real-world applications.

In this work, what Page’s team has achieved is giant nonreciprocity.

“Until now,” said Shah, “the best observed isolation behavior is in the range of 15 to 20 decibels. What we have achieved is closer to 48 to 50 decibels. In our device, the signal is essentially completely blocked when returning or reflected in the opposite direction.”

The device’s operation is enabled by an intense interaction between the vibrating piezoelectric crystal and the oscillating magnetic material described by the magnetoelastic interaction.

Shah added that this technology is a building block for developing another class of state-of-the-art RF device called a circulator. A circulator is very similar to an isolator in that it ensures the movement of RF signals in one direction, only. Shah expects that the team’s exploration of an acoustically driven circulator “is on the horizon.”

The team is also looking to improve on some other important metrics for their isolators. For example, they are exploring the possibility of using different materials for the device.

“We want to investigate the structure-property relationships of design variables and materials and their impact on the device performance,” said Shah.

The choice of materials for the device goes beyond just making it function well. To be useful in the field, it also must be mass produced in a manufacturing setting. Making it from scarce or uncommon materials would make producing the devices more difficult. The advantage of this device’s design is that it is based on materials that can be readily and inexpensively mass produced, as well as on acoustic wave technology that has been previously developed for other applications.

The AFRL team recently started working with Sandia National Laboratory. “Sandia has a strong capability in RF acoustic devices,” said Shah, “which is a strong complement to our magnetic material and device expertise.”

Having recently been awarded a patent for their tunable RF filter, the team has also filed a patent application for their RF isolator.

“The combination of the extremely high isolation in a readily manufacturable and small size package makes this technology very attractive for the next generation of microwave technologies” said Page.

“This has been an area of interest for our branch for several years,” said Page. “So far we have demonstrated the proof of principle in a working device and are working toward refining and extending the applicability of these devices for the warfighter.” 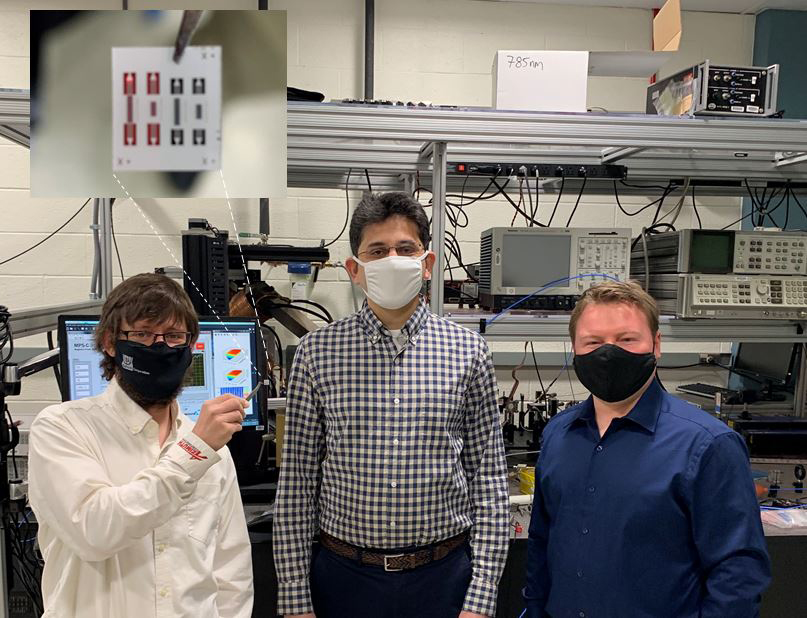 From the left to right, Drs. Derek A. Bas, Piyush J. Shah and Michael R. Page. In the tweezers, Bas is holding a chip that contains an array of four isolators. A state-of the-art commercial RF isolator has a much greater size and weight than the AFRL device. (U.S. Air Force photo/Dr. Michael Wolf)