KIRTLAND AIR FORCE BASE, N.M. — After more than 20 years and 5,500 graduates, the Air Force Research Laboratory’s University Nanosat Program is still providing college students around the country with a hands-on education in designing, building, and launching a satellite into space.

In 1999, the first year of the program, 10 universities participated. Over the years, that number has tripled, and is now being managed by one of its graduates, Jesse Olson.

Having entered the University Nanosat Program in 2013, Olson joined the Michigan Tech University, or MTU, Aerospace Team, and the opportunity to be a part of that team was one that weighed on him when deciding which college he would attend.

“I knew that MTU was participating in the University Nanosat Program, and as an undergrad, I wanted to work on something that would actually go to space!” said Jesse Olson, who now serves as the UNP program manager, based at the AFRL at Kirtland. “I wish all students were aware of the program, and how it prepares them to work in the space industry.”

UNP is a Science, Technology, Engineering and Mathematics program that encourages university students to competitively design, build, launch, and operate a small satellite or “nanosat.”

“The development of small satellites has distinct differences from large ones, and with the astounding growth in the industry, there is a need to grow the UNP program, and to provide the industry with more top-notch small satellite systems engineers,” Olson said. “When they leave our program, they are ready for a career in space systems.”

“We help bridge the gap between a student understanding the engineering theory and its principles, and the actual creation of a spacecraft system, ready for launch,” Olson said.

“The industry is growing so rapidly, and within the last 5-10 years, the military has really started to get on board as well,” Olson said. “Every three years we update our curriculum ensuring our students are getting the best, most relevant education possible.”

In the early days of the UNP, founder Jeff Ganley, now a senior aerospace engineer at AFRL, worked toward the goal of growing the small satellite base and developing a future workforce. This was a project that would take a lot of individual effort, a great deal of dedication from professors, and collaboration with other government agencies, to make it work.

“Standing up a new program and cobbling together funding, was made easier with early support from collaborators, Air Force Office of Scientific Research and Defense Advanced Research Projects Agency,” said Ganley.

Over the years, funding has come from agencies like NASA, American Institute of Aeronautics and Astronautics, and the Jet Propulsion Laboratory. A great deal of support – in the form of launching the UNP small satellites – has also come from the Space and Missile Systems Center which is co-located with the Space Vehicles Directorate at Kirtland.

“Working with some of the most renowned space agencies in the world gave us an opportunity to attract the most prestigious universities, as well as regional universities with strong aerospace programs,” Ganley said. “Stanford, Carnegie Mellon, University of Washington, Utah State, University of Colorado-Boulder, Arizona State University and New Mexico State were among our first early collaborators, and many of those same institutions are still with the program today.”

The goal of producing a workforce with strong satellite-systems engineering skillsets, is more relevant than ever, as that multi-billion dollar “smallsat” industry needs a well-qualified workforce.

“I think we’ve accomplished our initial goal of nurturing and growing the small satellite base,” said Ganley. “And many former students are now employed at AFRL, and throughout the country’s burgeoning space industry.”

The UNP founders anticipated the need for increased capacity in the industry, but the space renaissance that the world is experiencing now, is far beyond what could have been imagined in 1999.

“I’ve seen estimates that the investment in small satellites going forward, will be in the tens to potentially hundreds of billions of dollars per year, and when we first got started, it was in the low millions per year,” Ganley said.

Though government agencies once made up the majority of the satellite industry, today’s boom is in the innovative commercial space industry, which is outpacing federal agencies, and providing a valuable resource to organizations like the U.S. Space Force, AFRL, NASA and the Space and Missile Systems Center.

“It’s easier than ever to get an experiment into space, and off-the shelf systems are readily available,” Ganley said. “Companies like SpaceX, Amazon, Planet and Rocket Lab are providing amazing services and high-quality parts and systems. I see it as our job at UNP, to ensure there is a skilled workforce, ready to meet the demand of the U.S. space industry.” 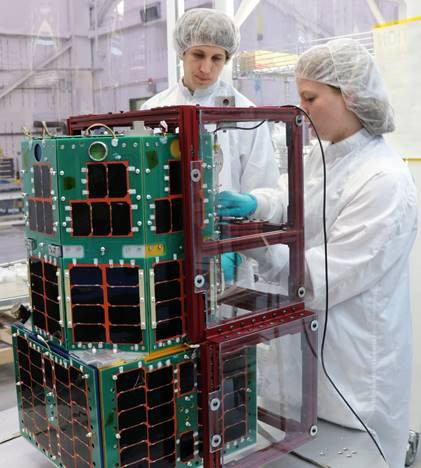