While their backgrounds vary, the winners all serve as leaders and role models within their organizations and respective fields. Seven winners hail from Wright-Patterson Air Force Base and the following AFRL Technology Directorates: Materials and Manufacturing, Sensors and Aerospace Systems. Two individuals work for the Space Vehicles Directorate at Kirtland AFB and one comes from the Information Directorate in Rome, New York.

She has more than 20 years of experience, specifically in coatings formulation and characterization, removal techniques, materials chemistry for polymers/coatings, coating selection for various military weapon system applications and application methods. Buhrmaster’s efforts consistently display her dedication to the end-user community.

Kerry Bennington, an electronics engineer, received the Manufacturing Technology Award in recognition of her achievements in improving the technology to manufacture Air Force systems, particularly by reducing the cost or complexity involved. Bennington, who serves as the Air Force Executive Agent Deputy Program Manager for the Defense Production Act (DPA) Title III Program, helped to optimize manufacturing processes for space solar cells, which led to a successful technology transition.

Bennington has successfully managed a variety of projects under DPA Title III involving components for space-based systems essential to national defense capabilities. She credits her success to the continued support and guidance she receives from colleagues. Bennington explains that the various opportunities they provided her with ultimately enabled her to gain the knowledge and skills necessary to realize this achievement.

His early Cold War exploitation efforts established the detection science and systems engineering concepts for laser threat detection and warning. Parker ultimately created a superior simulation capability to evaluate laser sensors and realistically simulate laser threat engagements. When he provided his expertise to the missile threat domain, he developed the first engagement systems architecture to evaluate and simulate missile-warning sensors. Most recently, he developed new low-cost missile warning concepts for a fraction of the cost of typical systems.

Michael Rucci, an electronics engineer from the Sensors Directorate at Wright-Patterson AFB, won the Air Force Scientist/Engineer Award in the Junior Civilian category. Rucci works with modeling and simulation, image processing and restoration stemming from atmospheric turbulence. His efforts to mitigate issues with sensors and restore imagery enable better image products from aircraft sensors. In addition to this Air Force level award, Rucci won the 2018 Junior Scientist of the Year Award within AFRL and at the Air Force Materiel Command level.

In 2018, Rucci and three other researchers received the prestigious Rudolf Kingslake Medal from SPIE, the international society for optics and photonics, for a paper published in Optical Engineering. This annual award recognizes the most noteworthy original paper to appear in the Society’s journal covering theoretical or experimental aspects.

Rucci enjoys the freedom he has within AFRL to try out different research areas, experiences that have enabled him to mature quickly in various technical areas. He also appreciates the guidance from the “great mentors at AFRL” who take time out of their busy schedules to assist the younger generation.

Dr. Brian Kasch, a research physicist from the Space Vehicles Directorate at Kirtland AFB, won the John L. McLucas Basic Research Award for his work in advancing precision sensors to ensure these sensitive devices can survive field operations. With nearly two decades of experience, Kasch provides technical management and laboratory support in the field of atomic physics and laser technology.

He and his colleagues create transportable devices that can leverage the precision afforded by quantum mechanics. His job entails pursuing ideas relevant to Air Force problems, setting up experiments to test new ideas in the field and pushing the development of robust components and subsystems. Kasch, who participated in some early pioneering experiments that ultimately led to a technology enabling the observation of quantum effects by the unaided eye, credits his career advancement to support from his advisors, colleagues, friends and family.

Major Gordon Lott, a program manager from the Space Vehicles Directorate at Kirtland AFB, won the Air Force Research and Development Award for his work in bringing new space-ready clock (or timing) technologies to the Department of Defense’s position, navigation, and timing (PNT) infrastructure.

As the primary provider of PNT to both the civilian and military communities, the Global Positioning System relies on an atomic clock that can function in space for its timing standard. Lott’s job is to lead the development of quantum timing and sensing technologies, which offer ultra-precise methods of keeping track of time, down to the millionth billionth of a second and sensing gravity, down to one trillionth of the force of earth’s gravity.

He and his team determine new ways to perform these measurements and mature the technology to create a usable product for the Air Force. Lott credits his colleagues for teaching him how to apply his background in physics, quantum information, and lasers to understand the technology and identify the advancements necessary to achieve the desired end state.

In his role as the RI test lead, DeMatteis acts as the director’s focal point for all test processes and procedures, providing expert technical and programmatic leadership, consultation and program management support. DeMatteis recognizes his supervisors for “giving him the freedom to lead and grow the RI STEM Outreach Program to what it is today.” 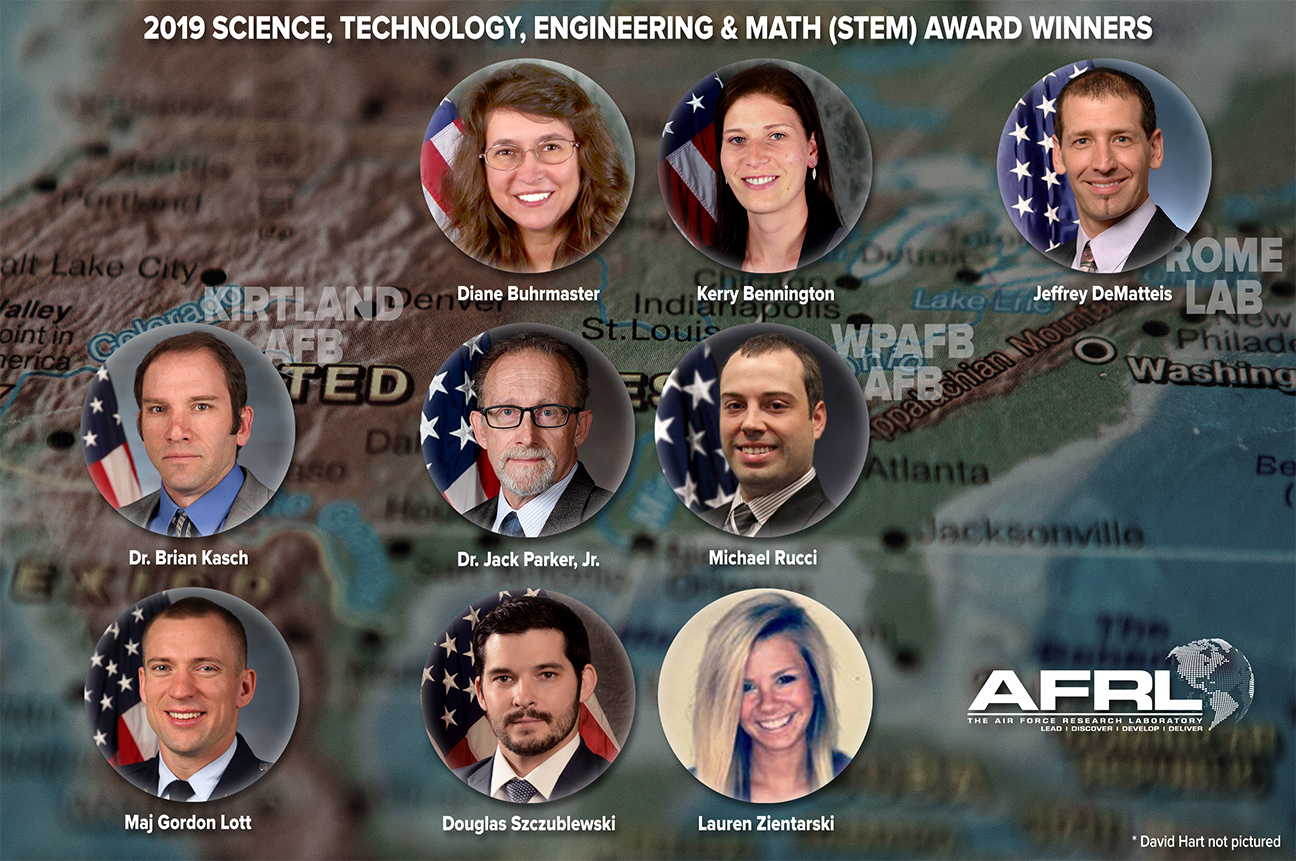