WRIGHT-PATTERSON AIR FORCE BASE, Ohio – As nearly every homeowner or backyard mechanic knows, performing repairs in tight spaces can be tricky at best, and potentially dangerous at worst. For aircraft maintainers, the hazards can be much more complex. To help address these issues, the Air Force Research Laboratory is partnering with small business.

Confined space operations are currently required for all military aircraft, during both the repair process and as part of routine maintenance. These actions could range from inspecting the interior of an aircraft wing to performing repairs on a fuel tank. Currently, the standard procedure for confined space maintenance calls for a team of at least two workers, one inside the space and one outside, keeping in constant vocal contact to ensure that the person inside does not require emergency intervention.

“This setup is generally very safe, but it is also inefficient in terms of labor,” explained Dr. James Christensen, AFRL 711th Human Performance Wing product line lead. “In many cases, two people are required to do a job that only requires one hands-on person.”

Recognizing the need for a labor-saving, safety-forward monitoring system, Lockheed Martin first tackled the issue a number of years ago, developing an early prototype system that incorporated wearable equipment including sensors, gas monitors, and portable radios that would enable the monitoring functions of a second worker to be consolidated and accomplished at a distance. This system worked well, but required maintainers to carry bulky equipment that could impede movement in tight spaces, and sensors that were prone to malfunctioning and causing false alarms.

“That’s when the Air Force Sustainment Center contacted us to perform the research and development needed to make this a more practical system for the sustainment enterprise,” said Christensen. “We worked with them to develop this concept under the SBIR [Small Business Innovative Research] program. Through this process, we identified small business partner Aptima, who took on the effort with Lockheed Martin as their subcontractor.”

Christensen explained that the 711th Human Performance Wing performed research and development to help mature the technology, including bench-level test and evaluation and full-scale testing on a C-130 aircraft wing. Additionally, they redesigned system components so that they could be more practically and functionally worn inside tight workspaces. Through collaboration with the AFRL Materials and Manufacturing Directorate and the NextFlex flexible hybrid electronics consortium, they developed a flexible arm band gas monitor that is durable, fireproof, and comfortable to wear. The end result was a next-generation prototype that was more compact, functional, and ready for final development.

With this advanced prototype in place, the AFRL team’s next step is to demonstrate the system in a maintenance environment. Although COVID-19 travel and workplace restrictions have presented a bit of a challenge, Christensen said the team is looking to hold a virtual demonstration with the maintenance crews at Robins Air Force Base in early 2021. He said that a virtual demonstration actually offers some advantages over a traditional in-person event by allowing more stakeholders to participate, getting hands-on experience with the monitoring software and viewing live data as crews perform maintenance actions in real time.

After the final demonstration, Christensen says the technology will be fully transitioned to Sentinel Occupational Safety to proceed with final development for both military and commercial use. He said working with small business provided AFRL the perfect win-win solution for getting this technology to the user community. By maturing the technology, AFRL reduced the investment risk for Aptima, which then formed the Dayton-based subsidiary company to take on the technology development and commercialization.

“It’s a perfect example of AFRL working with small business to create local jobs,” said Christensen, who explained that the partnership also gave AFRL a way to get the technology into the hands of maintenance crews more quickly.

“Transitioning this technology was looking to be a challenge. Since this system is not specific to any particular aircraft, there was no one office designated to pursue its development. By going the small-business route, we ensured that the technology would be developed with the goal of marketing it for the benefit of both the military and commercial sectors.”

Beyond the initial goal of making the Confined Space Monitoring System available for military aircraft maintenance, Christensen said the technology could prove useful for commercial aircraft maintenance, ship production, and even the mining industry. Any application that requires the user to be in a tight space with the need for continuous monitoring could benefit from the system’s added safety and efficiency.

“This really is an exciting technology that we’re proud to bring to life through our thriving small business partnerships,” said Christensen.

The Air Force Research Laboratory partnered with Dayton, Ohio-based small business Sentinel Operational Security Inc., to refine and market the Confined Space Monitoring System for use in both the military and commercial sectors. The technology provides an additional layer of safety for crews performing repairs and maintenance in tight spaces. (U.S. Air Force illustration) 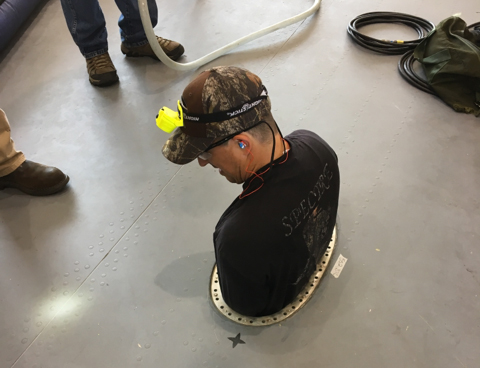 A maintainer uses the Confined Space Monitoring System in the wing of a C-17 aircraft. The Air Force Research Laboratory partnered with Dayton, Ohio-based small business Sentinel Operational Security Inc., to refine and market this technology as an added layer of safety for maintenance crews. (U.S. Air Force photo/Jennifer Tribble)