KIRTLAND AIR FORCE BASE, N.M. — The Air Force Research Laboratory’s Demonstration and Science Experiments (DSX) spacecraft has been operating since its launch in June 2019, conducting unique studies into the interactions of radio waves, space plasma and the radiation belts in near-Earth space.

AFRL is studying how very low frequency (VLF) radio transmissions travel through the low-density plasma in medium Earth orbit (MEO) and how the transmitting antenna interacts with this plasma during transmissions. DSX is the first mission designed to conduct VLF transmissions detectable at a distance in near-Earth space, and observe their effects.

VLF radio waves can be reflected or guided by charged particles, or plasma. In the Earth’s atmosphere, the ionosphere reflects AM radio waves allowing such radio stations to be heard at large distances. In near-Earth space, such waves can follow complex paths.

“These VLF waves interact with the very low density plasma near the spacecraft in ways we didn’t fully understand before our mission,” said Dr. William Robert Johnston, physicist and DSX principal investigator. “Within three months of launch, DSX had conducted the first space-to-space VLF transmission in which the DSX signal was detected by the Japanese Space Agency’s Arase spacecraft, over 400 kilometers away, during a coordinated experiment.”

“Because VLF waves are modified and guided by plasma in near-Earth space, these are challenging experiments to plan and conduct,” Johnston said. “There have been a few prior attempts from spacecraft, but none successful before now.”

DSX is the largest unmanned self-supporting structure ever flown in space, with an 81-meter tip-to-tip antenna – about the size of a football field.
“By flying such a large self-supported antenna, DSX can transmit at the radio frequencies needed for its experiments, plus it can control the orientation relative to the magnetic field,” Johnston said. “Right now, DSX is conducting a campaign to see what happens with transmissions when we vary the angle between the antenna and the Earth’s magnetic field at DSX’s location. DSX has conducted experiments on adaptive control of the motion of this large structure, providing results that will help future missions using large assemblies.”

The success of DSX supports AFRL’s scientific efforts to understand and model the dynamics of natural VLF waves and the radiation belts.

“The results we’ve gathered from the DSX satellite will enable future predictive capabilities of this environment on short timescales such as weather forecasts on Earth and long-term trends or climatology,” Johnston said. “Since the radiation belts are a danger to spacecraft and astronauts, our research will improve spacecraft and spaceflight safety and reduce the costs of dealing with this hazard.”

To better understand the radiation environment in MEO, DSX has secondary missions to measure the plasma and particle radiation in its orbit, as well as to study the aging of components as they are exposed to this environment.

Originally planned to be a one-year flight experiment, AFRL now expects the spacecraft to continue its experiments until May 2021.

“The extended mission is giving us many extra opportunities,” Johnston said. “We just completed a first campaign of joint experiments with FIREBIRD, a Montana State University / University of New Hampshire CubeSat in low Earth orbit.”

Over the coming months AFRL will have more joint opportunities with several satellites, including the Japanese Space Agency’s Arase and Canada’s CASSIOPE satellites.

“The secondary mission to observe the radiation environment in medium Earth orbit will benefit tremendously from more time gathering data – in the same way that if you want to understand the climate where you live, you need to watch for more than just a year,” Johnson explained.

Col. Eric Felt, the director of the AFRL Space Vehicles Directorate, is excited about the DSX mission and the results his team has achieved.

“Most space missions make passive observations, whether of their local environment or of bodies and phenomena at a distance,” Felt said. “DSX is in a small category we call “active experiments,” where we make small changes and watch the effects. No other mission has conducted VLF transmissions and observed their effects and interaction with the plasma environment in near-Earth space.”

As a research and development lab supporting both the Air Force and Space Force, AFRL is on the cutting edge of exploring space, explains Felt.

“AFRL is filling in knowledge gaps on topics like antenna performance that otherwise would still be unfilled, and addressing these gaps benefits our air and space warfighters as well as the broader science community,” Felt said.

“Our observations of the radiation belts will help improve specification models used by DoD and civilian spacecraft designers, and this ultimately benefits anyone that uses satellite services – which is virtually everyone,” Felt continued. “Being on the cutting edge of science that benefits our country is what we strive for at AFRL.” 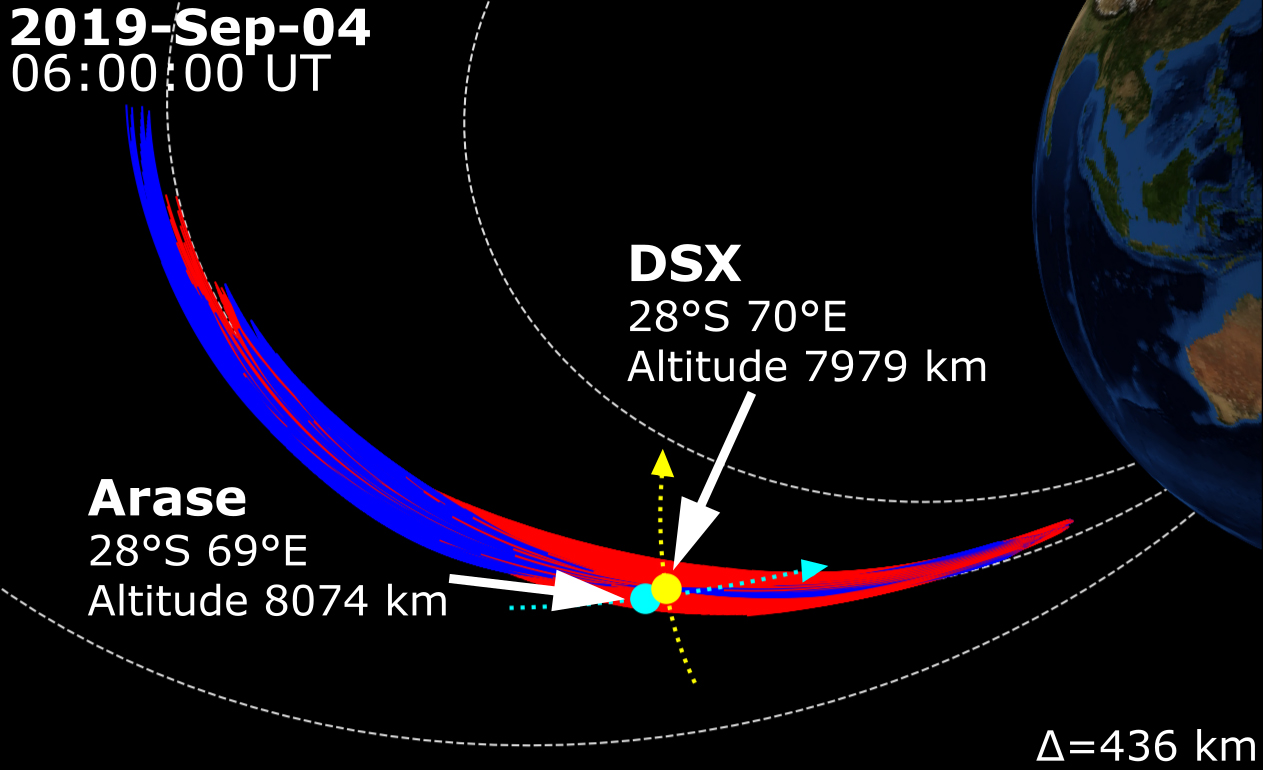 A diagram of the Air Force Research Laboratory DSX and Japanese Space Agency Arase experiment in which the first space-to-space very low frequency transmission was conducted. The locations and directions of the spacecraft at the time of the experiment are shown, DSX in yellow and Arase in cyan, when they were 436 kilometers apart. Direct VLF wave paths from DSX are in blue, while the paths of waves reflected by magnetospheric plasma are in red. White dotted lines show magnetic field lines from the Earth’s magnetic field, which tends to guide the low-density plasma and, as a result, the VLF waves. (Graphic courtesy of AFRL)