WRIGHT-PATTERSON AIR FORCE BASE, Ohio (AFRL) – On June 18, as a going-away surprise for departing AFRL Materials and Manufacturing Deputy Director, Col. Michael Warner, staff members treated him to an exclusive visit to the Charles Young Buffalo Soldiers National Monument in Wilberforce, Ohio. At the end of his visit, Warner was able to add yet another stamp to his National Park Passport. Warner “collects” National Parks, in a manner of speaking, having visited 362 of the 411 he has on his bucket list.

A passionate supporter of our National Parks, Warner spoke in a recent presentation to Wright-Patterson’s Black Employees Network about his visits to the Civil Rights National Parks and Monuments. In that talk, he expressed his regrets in not yet having visited the one that was figuratively in his backyard: the Charles Young Buffalo Soldiers National Monument.

Now that he was being transferred from Wright-Patterson to Hill Air Force Base, Warner would likely not have a chance to visit the Wilberforce site anytime soon, if ever. His last day in the Dayton area would be June 18 — and he was taking that day off. Staff members, however, saw this as a rare opportunity to present him with that perfect going-away gift. But then, as plans (kept secret from the boss) for his day off coalesced, it was learned that the park would be closed that day.

Never one to easily accept defeat, directorate management and program analyst Tina Spencer contacted a friend at Wilberforce to see if a special visit could be arranged. Much to everyone’s delight, the answer was a yes. Robert Stewart, Superintendent of the Charles Young Buffalo Soldiers National Monument, agreed to host a special tour, one that would even include a “behind the scenes” look at parts of Charles Young’s house that are ordinarily closed to the public.

The house, known as Youngsholm, is the main attraction of the 60-acre National Park. It was where Young lived when he was a professor of military science at Wilberforce University in 1918. In 1889, Young had been only the third African-American to graduate from West Point. He subsequently rose through the ranks, commanding a squadron of the 10th Cavalry Buffalo Soldiers in Cuba during the Spanish-American War, and becoming the first African-American colonel in the U.S. Army.

Following the war, in 1903, Young was assigned to lead 96 Black troops—who were also Buffalo Soldiers — to Sequoia and General Grant national parks, where he would serve as the nation’s first African-American National Park Superintendent. (Established in 1890, those parks today are Sequoia National Park and a small portion of Kings Canyon National Park).

Besides being home to Charles Young, Youngsholm is special for yet another reason. During the Civil War, the big house was owned by a freed slave named Laura Smith, who used her home as a stop on the Underground Railroad. Part of the special tour included the basement — normally closed to the public — where Smith hid enslaved people escaping to freedom.

While Warner and his staff were touring the home, Park Superintendent Stewart took a call on his cell phone. As an extra surprise, Stewart had arranged for Renotta Young, the great-niece of Colonel Charles Young and the president of the Colonel Charles Young Foundation, to call and speak with Col. Warner. During their brief conversation — on speaker so everyone could listen in — Warner expressed his gratitude to her and to all and said he was honored by her call.

“Ms. Young is a great friend to the Charles Young Buffalo Soldiers National Monument,” said Stewart, “and she was glad to speak with Col. Warner.”

As part of the trip, a member of the AFRL tour group arranged to donate two silver maple trees to the park in Col. Warner’s name. They would replace the two silver maples that had stood in front of the house during the Civil War. Although the original trees are long gone, they were symbolic of freedom when escaped slaves would walk between them to reach Laura Smith’s front door. Both trees will be bought from the Arbor Day Foundation.

It was a happy coincidence that days before Warner’s surprise trip, June 19 became a national holiday, Juneteenth, to be celebrated this year on the 18th — the very day of the tour. The emotional significance of that coincidence was not lost on anyone who was touring the national monument that afternoon.

“We were indescribably excited to stand there at the home of Col. Charles Young on the first federally recognized Juneteenth,” said Spencer, who also noted Warner’s role in spearheading the diversity, equity and inclusion effort at the Materials and Manufacturing Directorate. “Although the two men — Col. Young and Col. Warner — have walked drastically different paths through life, both are champions of diversity, equity and inclusion, challenging long-recognized norms and encouraging those they lead to serve as a positive force in the creation of a more equitable and diverse future.” 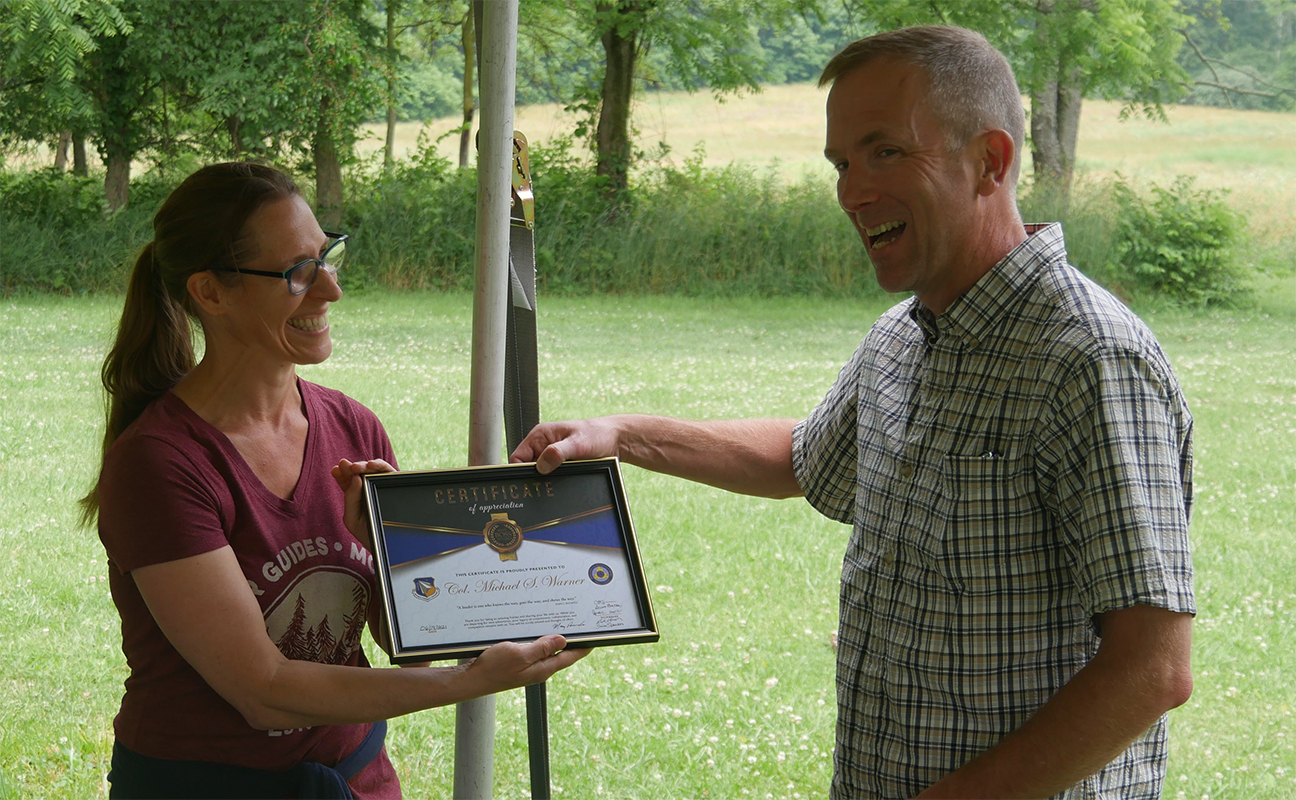 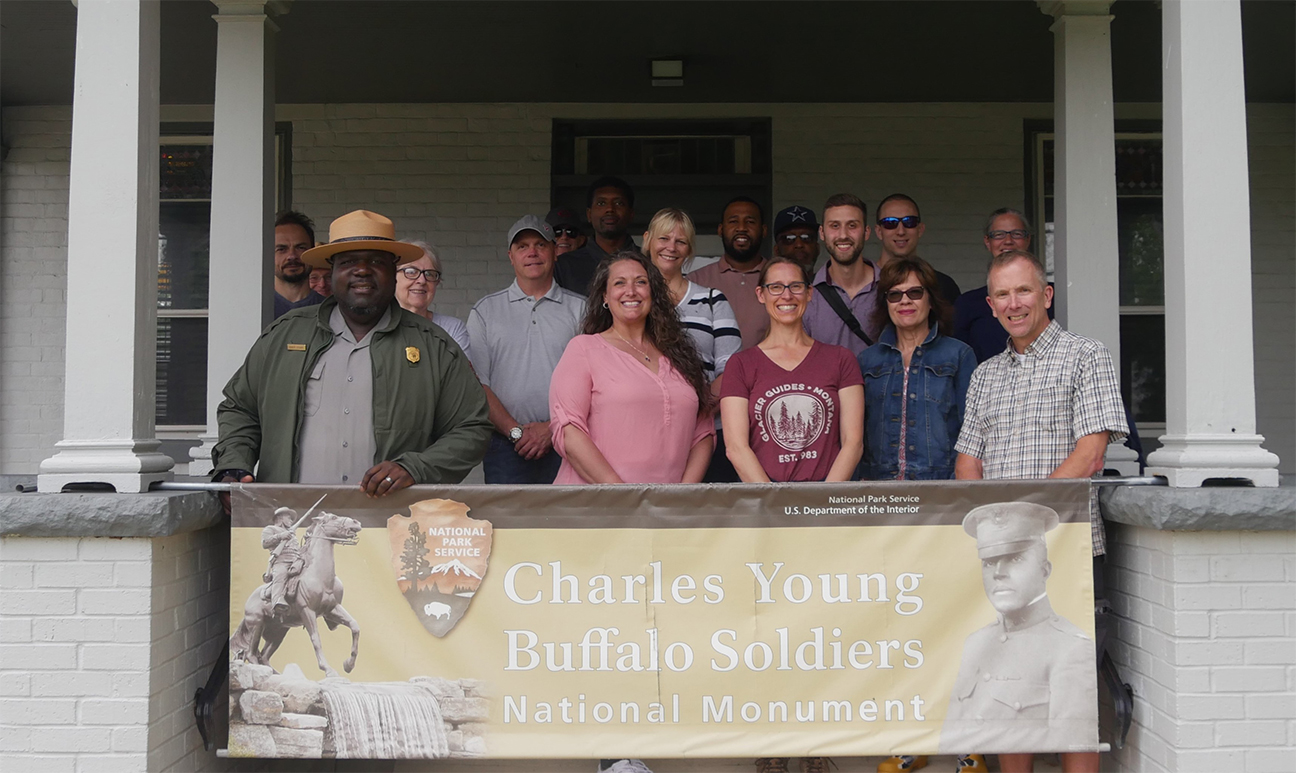 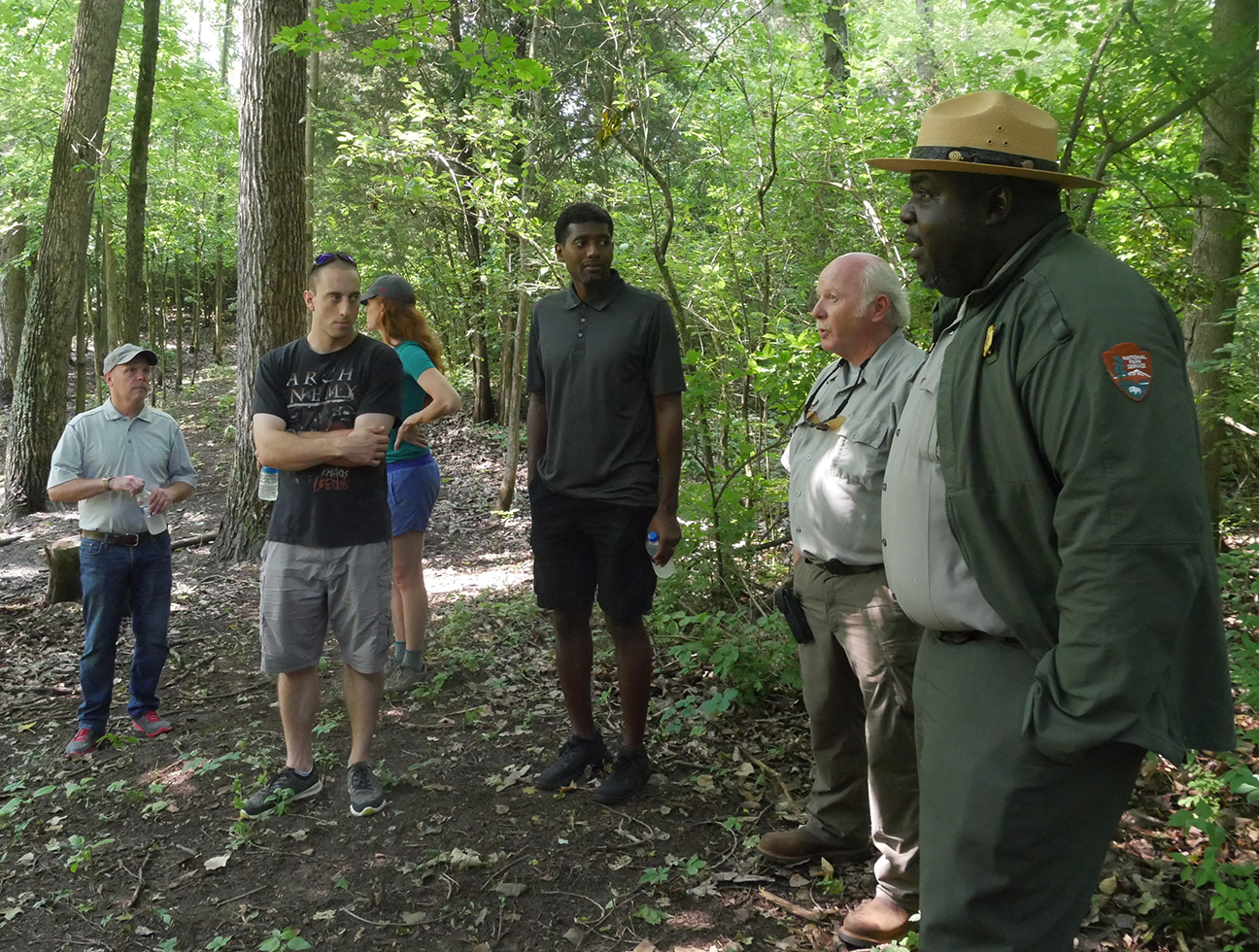 Park Superintendent Stewart (foreground) shows off an area of the park where a pond is currently under reclamation. (U.S. Air Force photo/Spencer Deer) 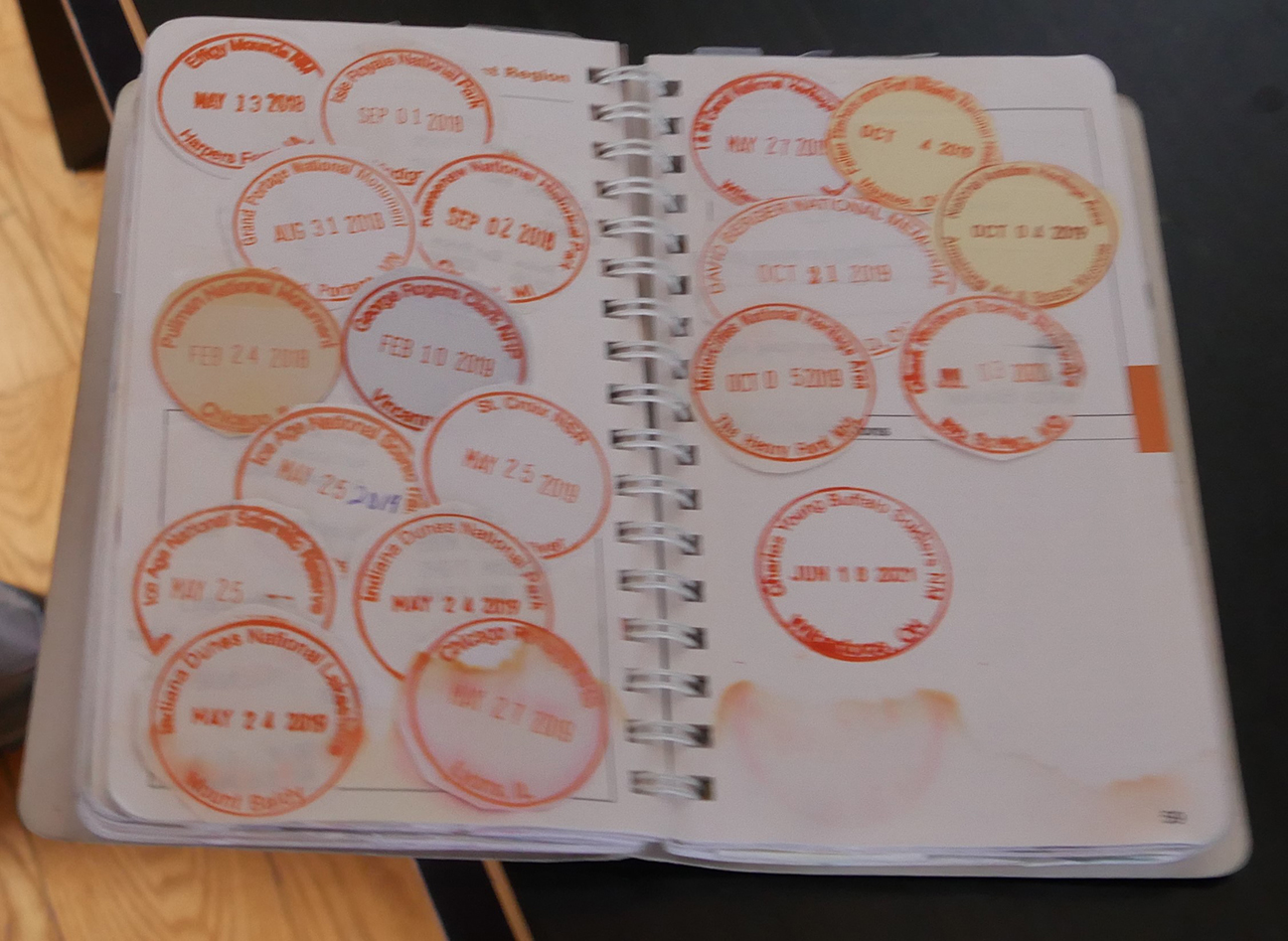 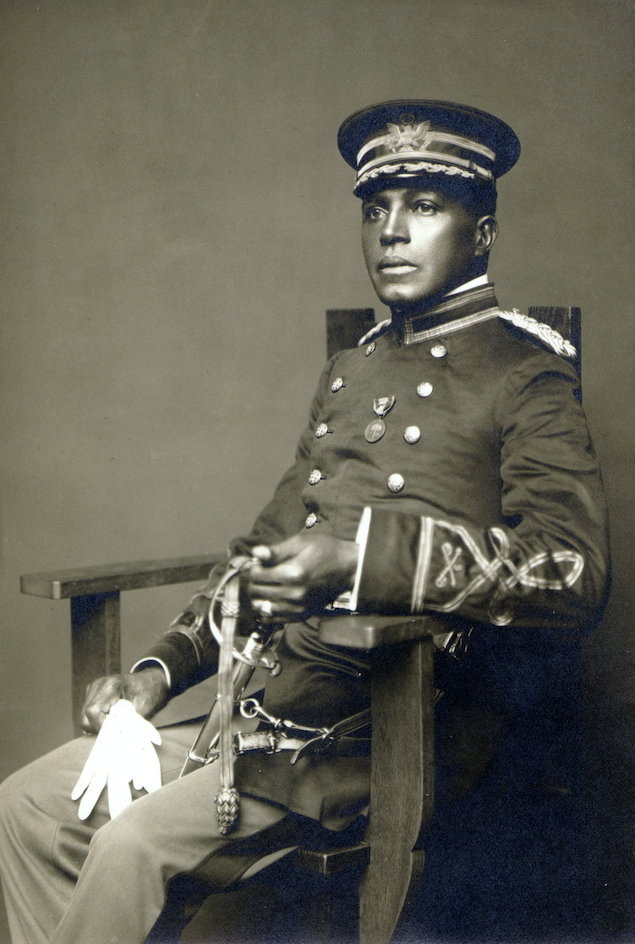 Colonel Charles Young sat for this portrait when he was a major in the U.S. Army. In this photo he is wearing the NAACP Singarn Medal. (Courtesy photo/National Afro American Museum and Cultural Center, Wilberforce, Ohio)