KIRTLAND AIR FORCE BASE, N.M. — The Air Force Research Laboratory summer internship program for students left the terrestrial realm for the extra-terrestrial this year. The program serves students ranging from high school to a doctoral pursuit.

As preparations began for the influx of almost 200 students from universities across the United States in March, it became clear that this year’s program would be unlike any others. Mentors and students would collaborate on their research projects online only.

AFRL space scholar mentor, Steven Lane, who holds a Ph.D. in Mechanical Engineering and Materials Science from Duke University, has been a researcher at AFRL’s Space Vehicles Directorate for over 20 years. This summer he is a mentor to Nolan Rebernick who is pursuing an undergraduate degree in electrical engineering from the University of Minnesota.

Lane and his team are investigating extremely high-frequency space communications science and technology, which is the area of research where Nolan is placing his focus.

“I hope to foster interest in space communications research and development, and help Nolan develop the appropriate skills and background to be successful in this research area,” Lane said. “My expectations are that he will learn the fundamentals of satellite communications, develop an appreciation of this diverse and important research area, and perhaps sharpen his programming skills. Since his project can be quite intense, I made it clear at the beginning that my primary goal is to provide a learning experience for him, and that we would proceed at a pace with which he was comfortable.”

When asked about the challenges of mentoring a student virtually, Lane had several observations.

“In general, I think that the biggest challenge with virtual mentoring is that it does not facilitate the same level of interaction and familiarity between the student and the mentor,” Lane said. “Students join the AFRL Scholars program seeking experience and knowledge to help them determine their career path. I think that the human aspects of their experience are as important as the technical knowledge.”

Nolan is no stranger to the AFRL Scholars program, having interned in 2018 with the Space Vehicles Directorate and in 2019 with AFRL’s Directed Energy Directorate, both located at Kirtland.

“Due to this summer being a virtual internship, my project will basically be to understand the ins and outs of satellite communications,” Nolan said. “This ranges from how antennas work to exploring the reduction in signal strength under certain weather conditions. All of this is guided by very detailed presentations created by Dr. Lane.”

Nolan related that his biggest challenge is not being able to gain experience with the equipment that the lab has to offer. “This was one of the things that helped me the most when learning complex material during my previous internships. I only wish I had the ability to interact with other researchers and interns in the lab. I learned so much over my last two summers just through conversation with these people.”

Though a virtual program presents its challenges, Lane and Nolan remain confident that it will be rewarding for AFRL research and to Nolan personally.

“I am really looking forward to the end of the internship technical briefing this summer,” said Nolan. “In the past, undergrad and masters scholars presented their work at a poster session at the end of the summer. Scholars would give a short informal run down of their project to people who found their work interesting. However, this year everyone is required to give a virtual formal technical briefing to the branch. I struggle with giving these kinds of presentations, so this will be an awesome opportunity to work on this skill.”

“I think that the AFRL Scholars program has been an excellent outreach tool to increase awareness of the AFRL mission and various research activities,” Lane said. “It has also helped us strengthen collaborations with academia. I’ve always received positive feedback on the execution of the program and the learning environment. The students seem to enjoy the experience, with some returning for multiple summers, just as Nolan has.”

“Virtual mentoring was a great solution to the difficult problem created by COVID-19,” Lane said. “But, I do hope that we can return to on-site internships in the future. Nolan’s internship this summer has been successful because he is disciplined, responsible, and applies himself. He reaches out when he runs into problems, and collaborates effectively with my other Space Scholar student.”

Nolan said this internship has really opened his eyes to the world of satellite communications and that he would love to end up with a job with either AFRL or a contractor in this field. “I definitely would consider returning as a civil service employee, and think it would be cool to take my time in the scholars program full circle and become a mentor myself!” 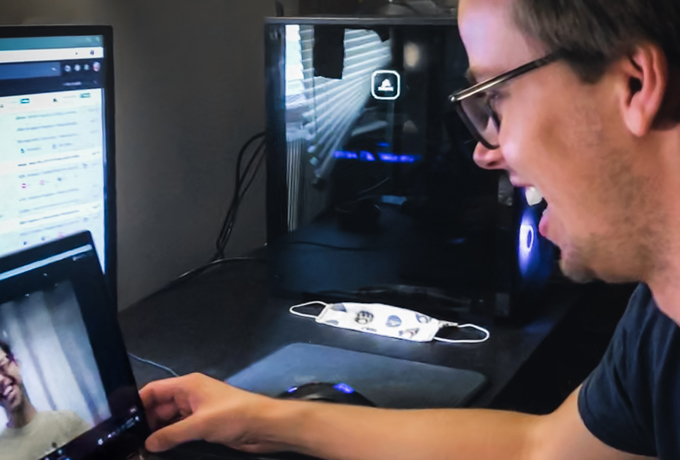 Air Force Research Laboratory space scholar Nolan Rebernick shares a laugh with his mentor Dr. Steven Lane, as they collaborate virtually on Nolan’s summer internship project. The AFRL Scholars program has nearly 200 students from around the U.S. paired with scientists and engineers at the AFRL Space Vehicles and Directed Energy Directorates. (Courtesy photo)