With SHARK, sensors embedded in shirts transmit key metrics including heart rate and estimated core temperature from smartphones to a server. As students undergo physical endurance tests during extended periods of isolation, the system allows instructors to monitor this data in real-time, and issues alerts for heart rate spikes and significant increases in temperature. Since the device identifies the user’s location, medical personnel can quickly respond to those in need of care.

2nd Lt. Matthew Dickinson, a biomechanical engineer within AFRL’s 711th Human Performance Wing (HPW), says that SHARK 2.0 is user-friendly and more secure. He explains that instructors and students alike are pleased with the streamlined setup process and the new web interface.

The commander of Detachment 3, 66th Training Squadron, Maj. Toby Andrews, said he appreciates that SHARK “gives [instructors] real-time alerts on the health and well-being of students.” The system “truly eases my mind as a commander,” he said since it “allows us to provide preventative care [in cases] that could otherwise lead to serious medical situations.”

Prior to SHARK, instructors checked on trainees at regular intervals to ensure their well-being. In certain cases, they administer ice baths to students with elevated body temperatures, said Tech. Sgt. John Garcia, a SERE instructor. However, since the introduction of this monitoring technology, zero ice baths have been required because the system alerts instructors before students reach what they call “the danger zone.”

To develop version 2.0, the SHARK team enlisted the help of Cedarville University students majoring in computer science. Loren Baum, who now works full-time in 711HPW, improved the code for his senior design project.  He optimized the software, added functionality, enhanced the security measures and streamlined the startup process.

Baum explains that the team moved SHARK from the mobile app arena to the web to make the system useable in a wider variety of scenarios. With the new approach, instructors simply log into a website from any computer to monitor students’ health status instead of launching an application, which requires installation and manual upgrades.

The team simplified the startup process with Quick Response (QR) codes that automatically input students’ information when scanned, Baum said. This measure reduced the total setup time from one hour to five minutes, and makes it easier for students and instructors to begin a new session.

In June 2019, the team traveled to JBSA-Camp Bullis and conducted initial tests with version 2.0. Once the team integrated additional software improvements, SERE instructors officially launched the upgrade in September.

This data would enable instructors to evaluate the effectiveness of interrogation techniques and determine the extent to which they affect individuals, said 1st Lt. David Feibus, a former software team lead, who is now a student at the Air Force Institute of Technology.

While SHARK is useful in various situations, Air Force instructors currently rely on this tool to offer “strenuous exercises in the safest manner possible,” said Ted Harmer, a 711HPW engineer who also leads a medical readiness personnel recovery training research team. When administering physical tests, instructors must achieve the purpose of the training and minimize negative impacts, whether they be physical or emotional, he explains.

Leadership from AFRL’s 711th Human Performance Wing originally learned about this need for additional safety measures during a visit to the USAF Survival School at Fairchild Air Force Base. School personnel explained that they needed a more proactive solution to monitor students’ health and performance during their rigorous training missions. Due to the ongoing research and development of wearable monitoring technologies in the 711HPW, experts decided the SERE training environment was another place this monitoring technology could improve the safety of SERE students and enhance their training program.

“Going in, we knew we needed a broad range of skillsets,” said Dr. James Christensen, a product line lead within the 711HPW. He explains that to produce an effective system, the team relied on expertise in wearable devices, electronics, software development, communications, human factors and physiology.

“We pulled together capabilities from several different parts of the organization to assemble the sensors, develop the software to pull sensor data together, and then build the communications capability to then send that data and be able to monitor it continuously and remotely.”

Following the initial design and development, the team arranged field tests with end-users. Several team members lived with JBSA-Camp Bullis instructors for one week to test SHARK 1.0 in 2018. Now, a year later, an upgraded system is in the field.

In the meantime, the SHARK team is also working with other groups who are interested in acquiring this technology including firefighters, NASA scientists and U.S. Army Special Forces. Members are currently exploring a version of the system that the Department of Defense Fire Academy can use under fire protection gear to prevent heat injuries. 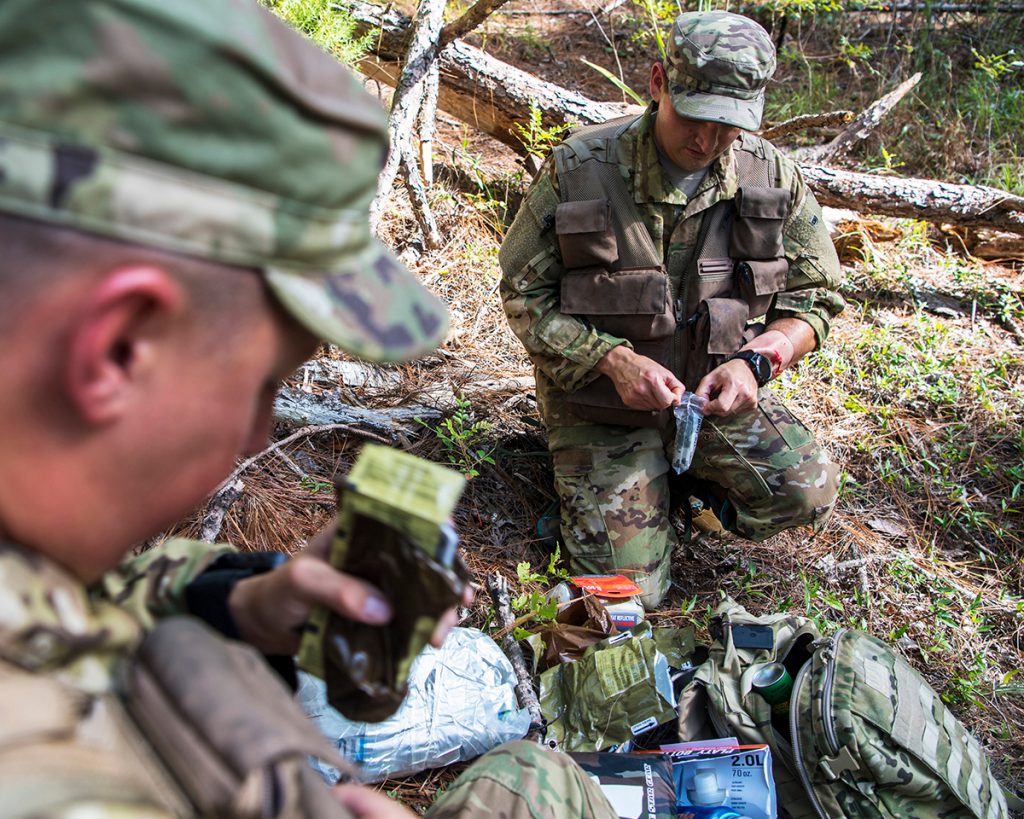