DAYTON, Ohio – The United States Air Force Thunderbirds delivered an awe-inspiring performance at the Vectren Dayton Air Show June 22-23, captivating young and old alike with jaw-dropping aerial maneuvers and impressive feats of skill. While these daring pilots and their impressive aircraft are the stars of the show, Air Force Research Laboratory technologies play a supporting role, making the spectacle possible through the marvels of science and engineering.

The six U.S. Air Force fighter pilots who make up the famous demonstration squadron bring years of flight training, and skilled crewmembers maintain the F-16s they fly. According to the Thunderbirds public affairs team, an average day includes three hours of maintenance and pre-flight checks per aircraft as well as three hours of work after the aircraft returns to the flight line.

However, along with the pilots’ skill and the aircraft technicians’ dedication and expertise, science and technology are also enabling factors. Throughout the years, AFRL scientists and engineers have researched and developed numerous technologies that transitioned to the Thunderbirds’ F-16 aircraft and equipment.

Just as technology keeps the fight unfair by giving Airmen the advantage when they go into battle, AFRL also keeps the “flight” unfair by supporting the Thunderbirds with cutting-edge aerospace technology. 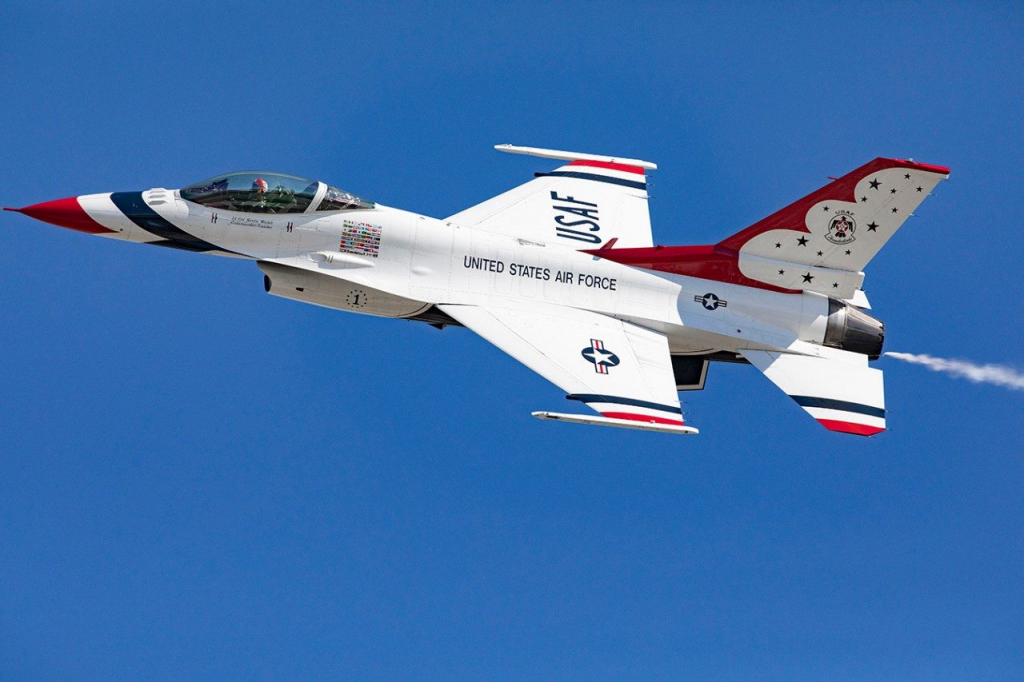 From the G-suits to the custom earpieces worn by the pilots to the F-16’s transparent bubble canopy, the fly-by-wire flight controls and the pilot/vehicle interface, AFRL technologies accompany the Thunderbirds around the world as they perform in airshows.

The Thunderbirds landed at Dayton International Airport June 20 to begin preparations for the air show. The team arrives early to study the area, identify geographic references and concentrate their maneuvers as close to show center as possible, according to Thunderbirds Public Affairs personnel.

As the slot pilot, he flies just aft of the No.1 aircraft and between the two wingmen. In previous seasons, he flew as the opposing and lead solo pilot, performing maneuvers that showcase the extreme capabilities of the F-16 aircraft.

Before becoming a Thunderbird, Collins served as an F-16 operational test and evaluation instructor pilot at Eglin Air Force Base, Florida. Since his dad worked as an aircraft maintenance officer, Collins lived on military bases around the world. Growing up, he enjoyed seeing fighter planes flying overhead.

“I just always thought that would be the coolest thing in the world to do,” he says.

Today, Collins is in his third season with the team and says he is thrilled to be living out his dream. 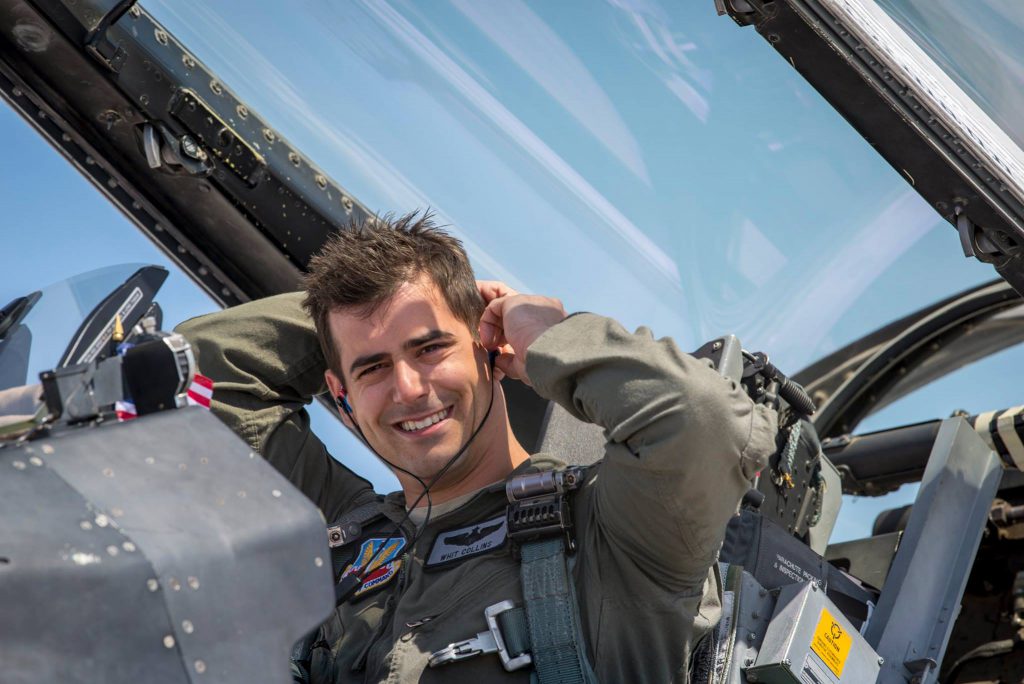 During flight, pilots encounter various elements, including constant noise above 130 decibels, a damaging, disruptive level that’s equivalent to a fire alarm. John A. Hall, an audiologist from AFRL, explains that this noise comes from the engine, the cooling fans inside the cockpit and the communication radio signals.

To protect their ears and enhance communications, the Thunderbirds and thousands of other pilots wear the Attenuating Custom Communications Earpiece System (ACCES®). AFRL Historian Kevin Rusnak says that the Human Effectiveness Directorate, now part of the 711th Human Performance Wing (HPW), researched and developed this technology in the 2000s.

ACCES® effectively reduces extreme noise levels by incorporating passive sound attenuation. Since the earpiece forms precisely to the ear canal, it blocks out the high-frequency noises from fighter aircraft like the F-16.

“Different technologies work in different frequency bands, and this system has a really good result in the mid-to-high frequencies where most of the engine and communication signal is a problem,” said Hall, the audiologist who developed this technology.

To bring the technology to the marketplace, AFRL entered into a Cooperative Research and Development Agreement with Westone Laboratories, Inc., a provider of hearing healthcare products. Made from silicone, these earpieces contain specialized electronics and a voice communications cable. A tiny speaker inside the earpiece transmits the communications signals directly into the ear canal.

“This equates to a more robust, clear radio communications signal that provides the user with increased clarity and higher speech intelligibility,” Hall explains.

Collins revealed that that five of the six Thunderbirds use ACCES® earpieces.

“The earpieces go so deep, and they work so well,” he said. “They feel great. You don’t even know they are there.”

To create a perfect fit, Hall developed a process in which an audiologist or a trained physiologist takes a custom mold of the ear to ensure a more secure fit. According to research, placing the earplug down at the second bend of the ear canal enables the greatest level of noise reduction.

“To do a second bend fitting, a custom fit is necessary; otherwise, users can experience discomfort,” said Hall.

Without this type of protection, pilots such as the Thunderbirds risk permanent hearing loss. Hall also said that short-term hearing loss could lead to critical errors due to misunderstood radio transmissions. 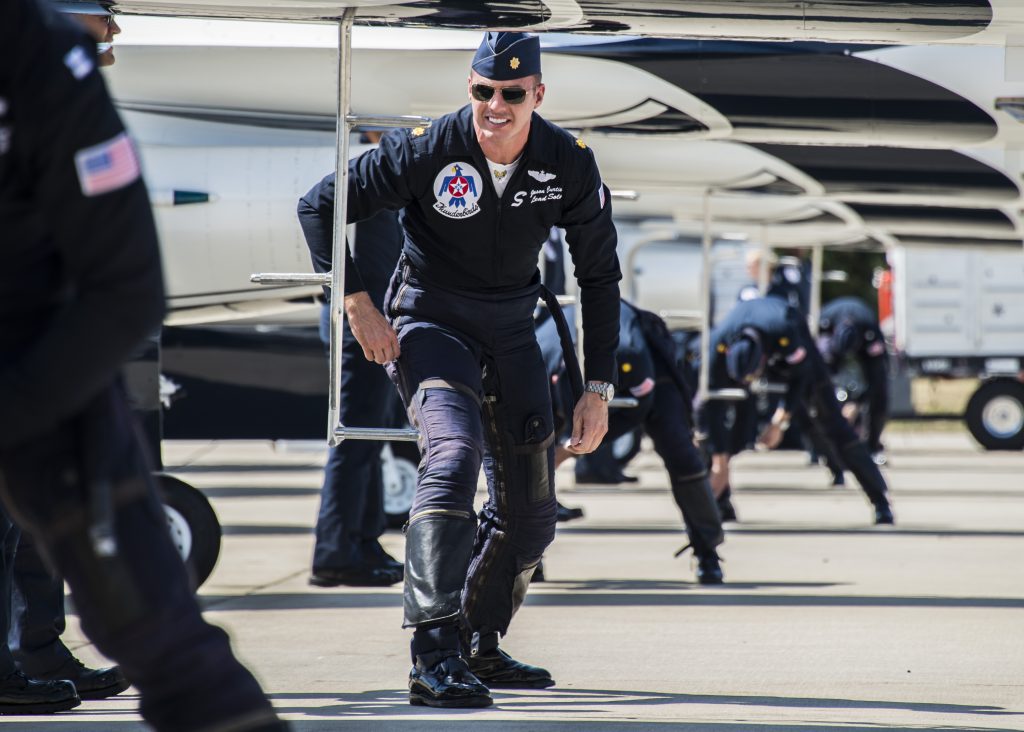 Dr. Lloyd Tripp Jr., an aerospace physiologist, explains that when fighter pilots perform turning maneuvers, they generate high-G acceleration, which forces blood away from the head to the lower extremities. G-suits push blood back towards the upper part of the body and prevent it from pooling in the pilot’s arms and legs.

The ATAGS is a fitted pant-like garment with bladders that fill with air to apply pressure to the lower body.

Collins compared suiting up the ATAGS to “putting on a pair of jeans.”

“The old G-suits were only partial coverage,” he said. “These new ones are full coverage.”

Collins asserts that ATAGS “really do help” and he described the difference between the new and the old technology as “noticeable.”

“You still have to G-strain. There’s still the human part of it, but we’re able to pull an extra G, G and a half (with ATAGS),” he explained.

As the Thunderbirds perform a series of daring aerial maneuvers, they experience G-forces as high as 9Gs, which is equivalent to nine times the force of gravity. Thus, a 180-pound pilot weighs about 1,600-pounds during a 9G maneuver.

When G-forces are present, the ATAGS automatically inflate, squeezing the pilot’s legs and abdomen to minimize the amount of blood that rushes from the head to the lower body.

“Increasing blood [flow] back to the heart provides increased blood pressure to the head, which results in higher G-tolerance and better G-endurance,” asserts Tripp.

The “human part of it” refers to the G-Strain maneuver. When Collins accelerates into a turn, he uses a technique called hook breathing. He begins with a deep breath, followed by a “k” sound, and a short, quick breath every three seconds. This technique helps to push the blood back toward the brain.

Kevin Price, a former F-16 pilot, explains that pilots strain as a function of where they encounter Gs before they begin executing steep turns.

Each year, the Thunderbirds perform in about 75 shows, and the pilots execute approximately 30 maneuvers in each demonstration. The F-16s can fly at speeds greater than 700 miles per hour with 29,000 pounds of thrust.

Lt. Col. Kevin Walsh, the Thunderbirds former commander, compared the team’s routine to an athletic event in an interview with Aviation Week magazine.

“We put the aircraft through the wringer, pulling Gs and demonstrating maneuvers to show what the F-16 [and the pilot] can do,” he said.

Tripp explains that ATAGS benefit the Thunderbirds by enhancing G-endurance and decreasing physical fatigue, which equates to increased safety during air demonstrations. 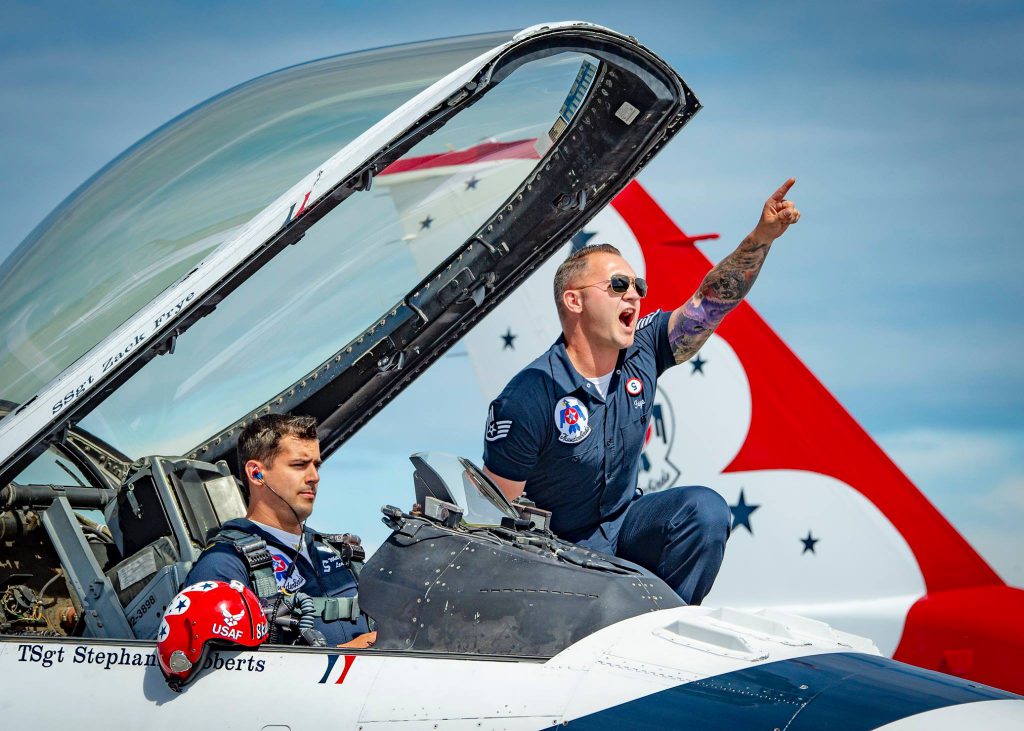 While Collins appreciates the F-16’s capabilities, he also describes it as a “wonderful airplane to fly.” He asserts that, “the bubble canopy is probably the best part” of the aircraft.

Collins cites the “visibility” and the incredible view the pilot has of his (or her) surroundings. In fact, the F-16 is famous for its 360-degree, unobstructed view from the cockpit.

“You are sitting up high and leaning back a little bit, and you have this bubble canopy that’s just your office view every single day, which is really awesome,” he says.

Back in the mid-1970s, the Flight Dynamics Laboratory (FDL), now part of AFRL’s Aerospace Systems Directorate, developed the design, structure and materials for the F-16 canopy, the transparent enclosure over the cockpit. According to Rusnak, the risk from bird strikes was the driving factor for this work.

To devise a new class of high-energy, impact-resistant laminated plastic windshields and canopies, engineers researched transparent materials and revised the structure for various types of aircraft. In the late 1970s, the F-16 became the first fighter to use modern transparency materials for a one-piece bubble canopy, a complex shape made from polycarbonate, says Mike Gran, an aerospace engineer from AFRL.

In the 1980s, AFRL led several design improvements and enhanced the canopy’s durability to ensure it could withstand the energy generated in bird strikes. Then, in the early 1990s, engineers analyzed 20 new canopy designs using code developed by the University of Dayton Research Institute. Afterwards, Gran says that a team of engineers built the best design.

“Testing is expensive so if you do all the design iterations on the computer, you save a lot of money,” he explains.

Gran revealed that the physical tests proved that the canopy could withstand bird strikes up to 540-knots (roughly 621 mph). Today’s F-16s incorporate this very design.

In May 2019, AFRL’s design was put to the test when a bird struck one of the Thunderbirds following the team’s flyover at the U.S. Air Force Academy graduation ceremony. After the pilot landed, Gran says that maintenance personnel inspected the aircraft’s canopy, frame and attachments and then teamed with the engineers to deem that the F-16 was safe to fly.

While the canopy surrounds the cockpit, the flight control system integrates the pilot with the airframe, thereby creating a highly responsive and effective unit. The F-16 was the first Air Force aircraft designed with fly-by-wire flight controls.

Collins explains that since “the F-16 was built dynamically unstable, it would be very difficult to fly without the assistance of the flight control system.”

Rusnak explains that this instability is necessary since it allows the aircraft to respond quickly to pilot control input.

“That’s what makes the jet so maneuverable and how we can turn so tightly,” said Collins.

Fly-by-wire technology uses computer-generated signals that transmit the pilot’s commands to the flight control surfaces instead of the push rods, bell cranks, linkages and cables used in older mechanical systems. With fly-by-wire, a series of sensors, computers, selectors, transducers and inverters collectively generates the pitch, roll and yaw rates.

The Flight Dynamics Laboratory, now part of the AFRL Aerospace Systems Directorate, developed this technology and demonstrated the analog fly-by-wire control system on a B-47 and later on an F-4, according to Rusnak. Then, in the late 1970s and early 1980s, under the Controlled Configured Vehicle and Advanced Fighter Technology Integration F-16 programs, a team of engineers developed a digital flight control system to replace the original analog one.

Collins explained that the “computers do the calculations and help the aircraft fly, so if you are going from 1G to 9Gs, it can be a smooth ride all the way there.”

“The computers execute [our] inputs, and this gives us the precision that we’re able to fly with,” he said.

Through a side stick controller, Collins sends signals to the flight control surfaces, and then the computers constantly adjust those inputs to enable stability in level flight. The side stick controller provides the pilot with easy and accurate control during high G-force maneuvers.

Rusnak explains that the F-16’s cockpit was designed ergonomically to ensure the pilot/vehicle interface functions in the most efficient manner.

“The hands-on throttle and stick is great,” said Collins. He explained that, “if you were to film my hands while I’m flying, it would look like I’m playing some kind of musical instrument.”

“Anything that I need to do while I’m up flying, I can do without taking my hands off” the throttle and stick. 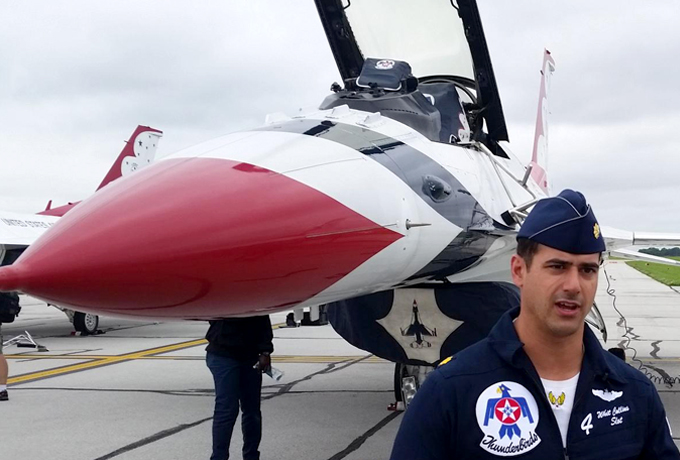