KIRTLAND AIR FORCE BASE, N.M. — A satellite developed by the Air Force Research Laboratory to measure low frequency waves in the magnetosphere will launch Dec. 4 to the International Space Station.

The AFRL satellite being launched from Cape Canaveral is called the Very Low Frequency Propagation Mapper or VPM. Its mission is to collect data on the Demonstration and Science Experiments, or DSX, satellite the Air Force launched in June 2019.

The VPM satellite was built at AFRL’s Space Vehicles Directorate at Kirtland AFB, and is part of a resupply payload aboard a SpaceX Falcon 9 rocket.

“VPM is a “CubeSat” satellite that measures 4 inches long, 8 inches wide, and 12 inches high whose mission is to measure very low frequency, or VLF, waves within the magnetosphere,” said Capt. Stephen Tullino, VPM Mission Manager. “It will primarily be a third party observer satellite to the DSX mission to prove that very low frequency waves can be injected within the magnetosphere.”

The primary goal for the satellite is to gather important data to better understand the effectiveness of the DSX satellite transmitter. VPM will remain in Low Earth Orbit for a total of 364 days to gather the data.

The VPM program cost was roughly $4.5 million and the design uses commercially produced components to evaluate their utility.

The spacecraft is using the Pumpkin 6 cubic unit (6U) CubeSat structure, Pumpkin batteries and solar panels to evaluate the capabilities of the Clydespace Electrical Power System, the utility of the Beaglebone Black as a flight computer, Blue Canyon Technologies XACT ADCS, Globalstar Simplex Transmitter Unit-3 beacon, and a Vulcan Wireless software-defined radio transponder. The VLF receiver was designed by Stanford University and constructed at AFRL along with the remaining spacecraft hardware.

In addition to testing the effectiveness of the commercial spacecraft components, VPM will test commercial communication systems. It will be one of the first DoD missions to utilize the global communication network known as Kongsberg Satellite Services.

Once on the ISS, VPM will remain there for approximately five weeks before it will be carried to a higher orbit by a Northrop Grumman Cygnus resupply capsule, and deployed mid-January 2020.

Once VPM enters higher orbit, it will switch on and deploy two antennas that will be used to measure VLF waves.

“This mission is unique in that it will be operating a VLF receiver in space as a dedicated receiver for another satellite (DSX) that will be transmitting VLF waves that it can observe,” Tullino said.

The satellite is currently at the Kennedy Space Center in Florida and has been loaded into the SpaceX Dragon resupply capsule in preparation for launch. 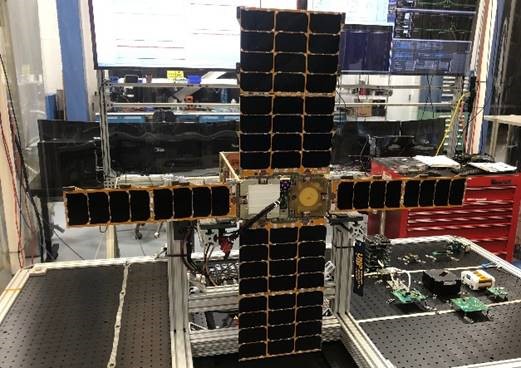 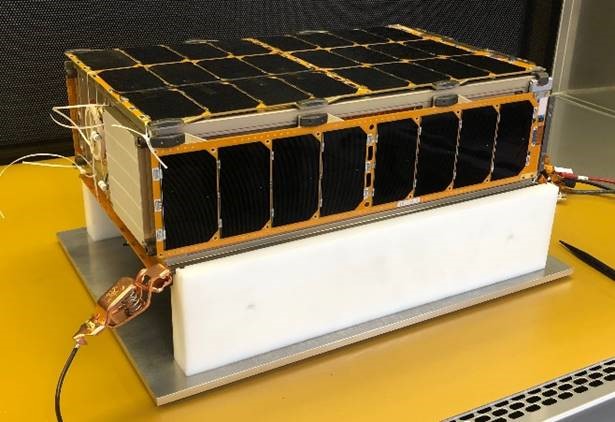 The Air Force Research Laboratory’s Very Low Frequency Propagation Mapper (VPM) satellite with VPM buttoned up. The VPM satellite will be launched from Cape Canaveral, Florida on board a SpaceX rocket on Dec. 4. (U.S. Air Force Courtesy photo by AFRL)