WRIGHT-PATTERSON AIR FORCE BASE, Ohio – Name this technology. Medical professionals walk around with them draped around their necks or tucked in the pocket of their white coats. That’s right! A stethoscope.

Most learn at an early age how these work—putting the ear pieces into the ears and placing the small circular piece over the heart to listen closely.

Stethoscopes are acoustic medical devices designed to listen to the internal sounds of the human body such as the heart, lungs, intestines, or the blood flow in arteries and veins. According to medical experts in the Air Force Research Laboratory’s 711th Human Performance Wing, this is a go-to tool for early diagnosis and can save lives.

“If someone were to drop me on an island with injured people and I only had one medical tool, I’d choose the stethoscope,” explained Dr. Melissa Wilson, nurse scientist in the 711HPW. “We can use it to listen to the heart and lungs, but it is a multipurpose tool that can also be used to listen to the bowel and blood pressure, among other uses. Sometimes we can hear problems before we can see them.”

In an environment such as a hospital or doctor’s office, noise isn’t a concern; a basic stethoscope will work. But when military members are injured down range, their first “hospital” is in the middle of a field or inside of a very loud cargo plane such as a C-130 or C-17—while it’s up in the air.

So what happens when medical personnel need to listen to these internal sounds to monitor and treat their patients in such deafening environments? Up until recently, they did not have a tool for this.

“Typically when we use a stethoscope, it just amplifies the sounds within the patient,” said Charles Harding, a 711HPW biomedical engineer. “But in high noise environments, all sounds are amplified and we can’t hear the patient. For example, if we’re in the back of a helicopter, we’d just hear helicopter noise.”

This team of researchers decided to reintroduce stethoscope technology in a more advanced way. They are optimizing and testing a commercially available wireless stethoscope that will not only enable medical personnel to listen and diagnose, but also record sounds for purposes such as second-opinion diagnosis and training. Further, because they are wireless, these Bluetooth-capable devices can be left on a patient for monitoring while the technician, nurse or doctor tends to other patients.

“The idea with this new technology is that if we can modify the common stethoscope for a military environment, not only can medical personnel use it to address heart and lung issues, but also other diseases that are internal with symptoms that are not visible,” explained Harding.

“Many times symptomology is internal before it’s external, so an earlier diagnosis means quicker interventions to help injured warfighters.”

A basic task such as feeding a critically injured patient with a feeding tube can pose a threat without a stethoscope because the tube could get dislodged and move into the lungs. Feeding tubes in the field are difficult to maintain because of the constant movement of the patient, explained Wilson. “This technology gives information to the clinicians so they can maintain placement of the tube – information that they didn’t have before.”

The new device, created by ThinkLabs, has filtering technology. With five different filters, it has the ability to filter out certain sounds, leaving only what needs to be heard inside the patient, explained Harding. “Of the five filters, there are two heart filters, which work to isolate only heart sounds; two lung filters, which target the inhale and exhale movement of air sounds; and a broadband filter, which allows medical crews to record sounds for second opinion diagnoses as well as training.

“The broadband filter is a great tool for what we call TM3—telemedicine, telemonitoring, telementoring. We can record the sound and quickly send it off to another medical professional to get their assistance or advice,” said Harding.

The 711HPW team continues to work on additions for this new piece of technology. They are looking into options for multi-patient monitoring – a wireless stethoscope on every patient in the cargo bay with a central monitoring device. Also, they are looking into building new filters for additional noise and vibration. Wilson explained that when the device is first put on a patient, there’s a delay because the device is “reading the room” to learn and filter ambient noise so the sound in the device is clearly heard.

“Our future hope is that we can train the device in the environments we train and work in,” she said. “So if we know we’re transporting on a C-17, then our plan would be to have those noise profiles loaded in and proactively filter out everything except the patient. This could be accomplished for every airframe we transport patients on.”

The new stethoscope, which has been flight tested, is currently undergoing additional noise and vibration research.

“This innovative medical tool will help Department of Defense aeromedical professionals better treat injured warfighters, and transport them back home to their loved ones,” said Wilson. 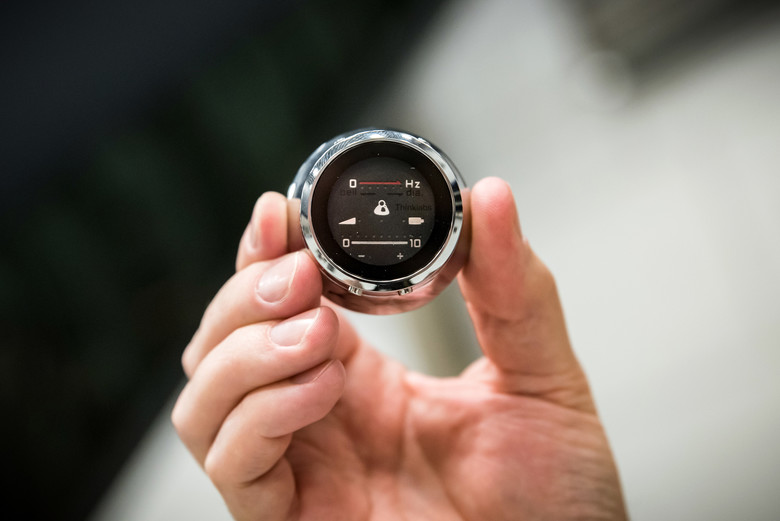 The new wireless high-noise filtering stethoscope that is being tested by researchers in the Air Force Research Laboratory’s 711th Human Performance Wing, is displayed during a testing session. The device was developed by ThinkLabs. (U.S. Air Force photo/Richard Eldridge)