AFRL has leveraged the power of high performance computing to accelerate research efforts for years while bringing new technologies to bear on critical mission areas. Computing needs are changing and must be secure to prevent adversaries from leveraging DoD knowledge and expertise. 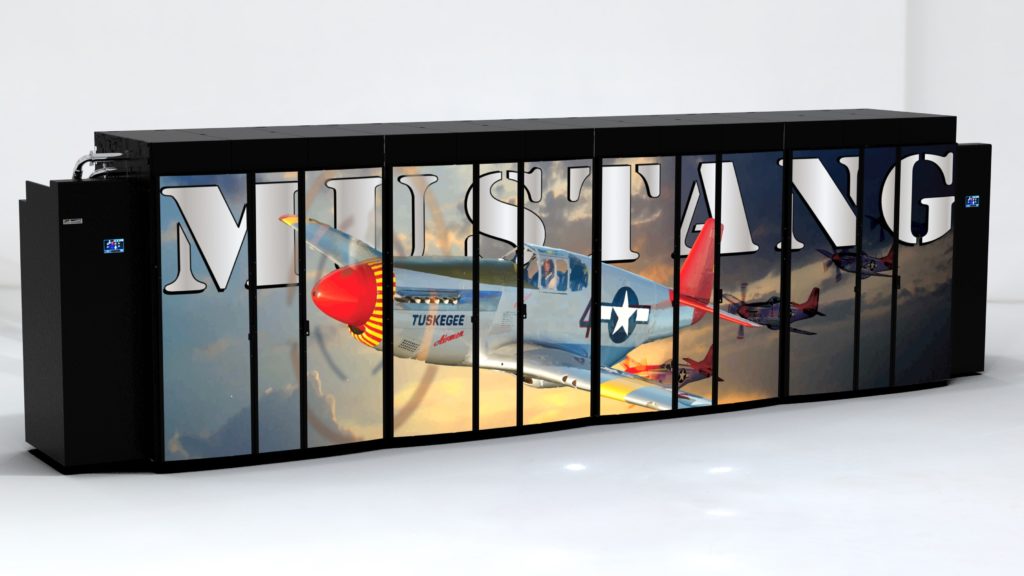 These new capabilities must also be flexible and sharable across the Department of Defense as well as other government agencies and are a big first step toward these goals.

Four systems deployed at the AFRL DSRC form this new supercomputing capability. Three of the systems will be dedicated to classified work. One additional large supercomputer will support unclassified operations and foundational work to be elevated to higher classification levels as efforts mature. “Mustang,” the unclassified system named in honor of the P-51 aircraft flown during World War II, became operational in December 2018. The Mustang supercomputer is a $15 million Hewlett Packard SGI 8600 with 56,448 computing cores. Mustang joins the three classified systems, “Voodoo”, “Shadow”, and “Spectre” as part of this new capability.

“AFRL has been at the forefront of the effort to establish this capability for the DoD,” said Jeff Graham, AFRL DSRC Director. “It shows our commitment to advancing computational tools being used to support the warfighter. The ability to share supercomputers at higher classification levels will allow programs to get their supercomputing work done quickly while maintaining necessary security. Programs will not need to spend their budget and waste time constructing their own secure computer facilities, and buying and accrediting smaller computers for short-term work. This new capability will save billions for the DoD while providing additional access to state-of-the-art computing.”