WRIGHT-PATTERSON AIR FORCE BASE, Ohio (AFRL) – Dr. Leonard Lightfoot received the 2022 Black Engineer of the Year Award in STEM for Professional Achievement, after being nominated by the Air Force Research Laboratory’s Sensors Directorate.

“Dr. Lightfoot is an exceptional leader in the Sensors Directorate, making significant DOD-wide impacts in cybersecurity, microelectronics, and sensor technologies, and has demonstrated excellent leadership skills as he [has] collaborated with senior DAF and DOD leadership to shape and influence DOD Microelectronics Strategy,” wrote Amanda J. Gentry, director of AFRL’s Sensors Directorate, in Lightfoot’s nomination.

Lightfoot spent eight years in the Sensors Directorate, working as a research electronics engineer as well as executive assistant to previous Sensors Director Ruth Moser, before taking his current position in 2018 in the Office of the Deputy Assistant Secretary of the Air Force for Science, Technology and Engineering (SAF/AQR). As a program element monitor (PEM) for two multi-million-dollar portfolios, Lightfoot advocates for the relevance and necessity of Sensor technologies and capabilities research, such as for secure and trusted microelectronics systems.

“Informally, we [PEMs] call ourselves technical translators. We’re one of the small number of people that’s coming from the lab that are in the Pentagon. And so, anytime there are technical questions, we’re kind of the go-to to represent the AFRL portfolio to kind of help senior leadership understand the various technologies that are going on in the lab.”

In this position Lightfoot serves as a senior plans and programs engineer as well as PEM for the ~$300 million DAF Sensors Science & Technology Portfolio and ~$25 million Combat Identification Technology Portfolio, on which he briefs Congressional professional staff members on the House and Senate Armed Services Committees and OSD.

“[It’s been] a very eye-opening experience just to kind of give a broader AFRL perspective sometimes,” Lightfoot said. “Being part of the PEM has really truly made me appreciate the value in communicating to our senior leaders, and to people in general, just the value of S&T because sometimes it can be overlooked because it’s so far away. From the acquisition perspective, it’s hard for them to really understand because we’re working on technology that’s gonna be 10-to-20 years out. So, our job as scientists, engineers, is to continue to advocate for that and inform them.”

“It’s all about storytelling, right?” he said. “And that’s one of the biggest skills that I’ve learned over time just being here in terms of communicating to the various different audiences so that they can make these informed decisions and not just maybe get caught up in the hype of media or whatnot.”

Lightfoot said his time in the lab prepared him for this current role. “That definitely helped me a lot in terms of what I currently do now, because I’m able to understand how to engage with the senior leaders. Working down in the lab, doing demonstrations, to get exposure to senior executives, just to kind of see how decisions are made.”

He also gained leadership experience while serving as president of the AFRL Sensors Directorate Junior Force Council from 2011 to 2013 and as president of the National Society of Black Engineers, Dayton chapter from 2012 to 2014. He has been a member of the Institute of Electrical and Electronics Engineers since 2006.

Speaking to young STEM-oriented minds, he encouraged them to take advantage of opportunities when they present themselves. He explained that his Junior Force Council presidency was not something that was initially on his radar but that it stretched him in terms of engaging with other scientists, engineers and Junior Force members and is potentially what led to him taking the leap to move his family of five to D.C. for his current job.

“You truly don’t know what the opportunity entails until you kind of do it,” Lightfoot said. You kind of do need a little bit of courage to do those sorts of things.”

Sharing his leadership insights further, Lightfoot has tutored and mentored underrepresented youth, conducted financial literacy seminars in underrepresented communities and cofounded The Black Coffee Company, which donates to a non-profit organization that supports people suffering from mental illness and to Xavier University of Louisiana (XULA) students in need due to Covid-19.

Lightfoot first gained expertise through education with a Bachelor of Science in computer engineering from XULA and a master’s and doctorate degree in electrical engineering from Michigan State University, where his thesis and dissertation focused on security protocol for wireless sensor networks and jamming-resistant wireless communication, respectively.

He received the Black Engineer of the Year Award in STEM for Modern Day Technology Leader in 2012 as well as Leadership and Incentive awards from the Sensors Directorate in 2013 and 2012, 2016 and 2018, respectively.

“With the pace that I guess I’ll call the Pentagon pace, sometimes it is good to slow down and take a breath and realize what you’ve done because you’re moving at such a fast pace in terms of providing information to leadership, go[ing] and do[ing] this sort of briefing, making this sort of decision, organizing these sort of big engagements,” said Lightfoot. “The[m] requesting to put my name in the hat forced me to sit down and realize what I’ve done; so, it definitely it means a lot to me. And I’m truly thankful for the recognition.”

To learn more about Lightfoot’s work, stay tuned for the next episode of the Air Force Research Laboratory’s Lab Life podcast. Be sure to follow AFRL on social media at Facebook, Twitter, LinkedIn, Instagram and YouTube @afresearchlab for the announcement of the next episode. 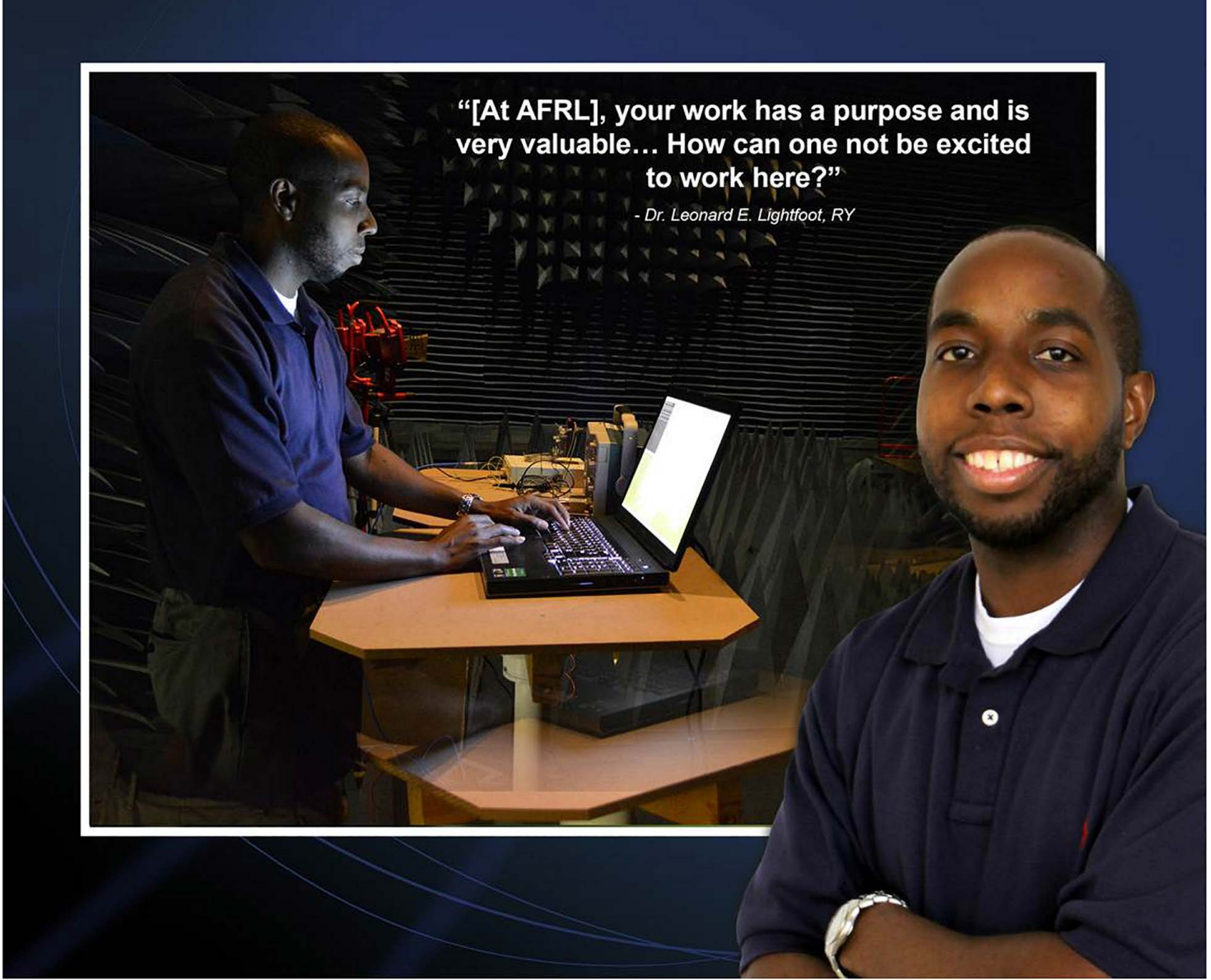 Previously featured in the Air Force Research Laboratory’s leadership poster series, Dr. Leonard Lightfoot has served the Sensors Directorate for 11-plus years and currently represents the lab’s interests in the Office of the Deputy Assistant Secretary of the Air Force for Science, Technology and Engineering. (Courtesy photo illustration)