As director of Materials and Manufacturing, Phillipson will lead more than 900 military members, civilians and contractors, executing an annual budget in excess of $400 million. He will ensure the development of materials, processes and advanced manufacturing technologies for aircraft, spacecraft, missiles, rockets and ground-based systems and their structural, electronic and optical components. Phillipson will solve system, expeditionary deployment and operational challenges for Air Force product centers, logistic centers and operating commands.

Pringle enthusiastically spoke of Phillipson’s accomplishments during her welcoming remarks in the ceremony, referring to Phillipson as a person of integrity, hard work and heart. Following her remarks, Pringle presented Phillipson with the Meritorious Civilian Service Award.

Phillipson joined the Materials and Manufacturing Directorate with a master’s in mechanical engineering and 33 years of Air Force experience. He entered civilian service in AFRL as deputy chief of the Plans and Programs Space Sector and previously served as vice director of the 711th Human Performance Wing, part of AFRL.

Phillipson concluded the ceremony with his own sentimental and heartfelt remarks to his family and co-workers and thanked each person who contributed to his accomplished directorship and Senior Executive status.

“In my interview, I said that it feels like coming home (to AFRL),” said Phillipson. “I am humbled to have the opportunity to lead the people of (the Materials and Manufacturing Directorate).” 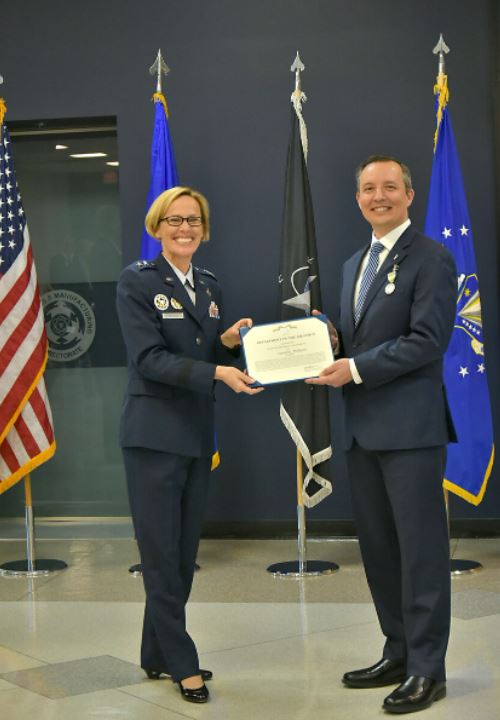