The SHiELD program is developing a directed energy laser system that will reside in an aircraft pod, to demonstrate defensive capabilities of aircraft against surface-to-air (SAM) and air-to-air (AAM) missiles.

Receiving its first major assembly, the SHiELD pod structure will enable AFRL scientists and engineers to begin integration of the complete system, to include pod, laser, and beam control, and signals an end to the development and production stage of these important subsystems.

“Over the last five years we have worked side-by-side with Lockheed Martin, Boeing and Northrop Grumman, advancing the technology that would make this system work,” said Dr. Jeff Heggemeier, SHiELD program manager. “To finally have the subsystems in the lab, will be a huge step forward in seeing the system to completion.”

The technical challenges involved with shooting down incoming missiles at Mach speeds are tremendous.

“These are hard problems we are solving,” Heggemeier said. “Imagine the disturbances and stresses – wind speeds, turbulence, and quick aircraft maneuvers that a laser system would have to perform under. We had to solve those challenges first—and that took time.”

Over the past two years, the SHiELD team has seen major program milestones and technology maturation, including successfully flying an F-15 with attached laser test pod, and the successful shoot-down of air-launched missiles using a ground-based system configured to represent the laser system’s self-protect aspects.

“Those critical demonstrations show that our directed energy system is on track to be a game changer for our warfighters,” said Dr. Kelly Hammett, director of AFRL’s Directed Energy Directorate. “The ability to shoot down missiles in flight, and operate in denied environments, increases the advantage we have over our adversaries.”

The remaining subsystems, the laser system and the beam control system, should be delivered by July, and the full system test is scheduled for FY24.

“We feel confident that after years of development and the testing that has occurred, that SHiELD will do what we’ve said it can,” Heggemeier said. “And that is a big win for our Airmen.” 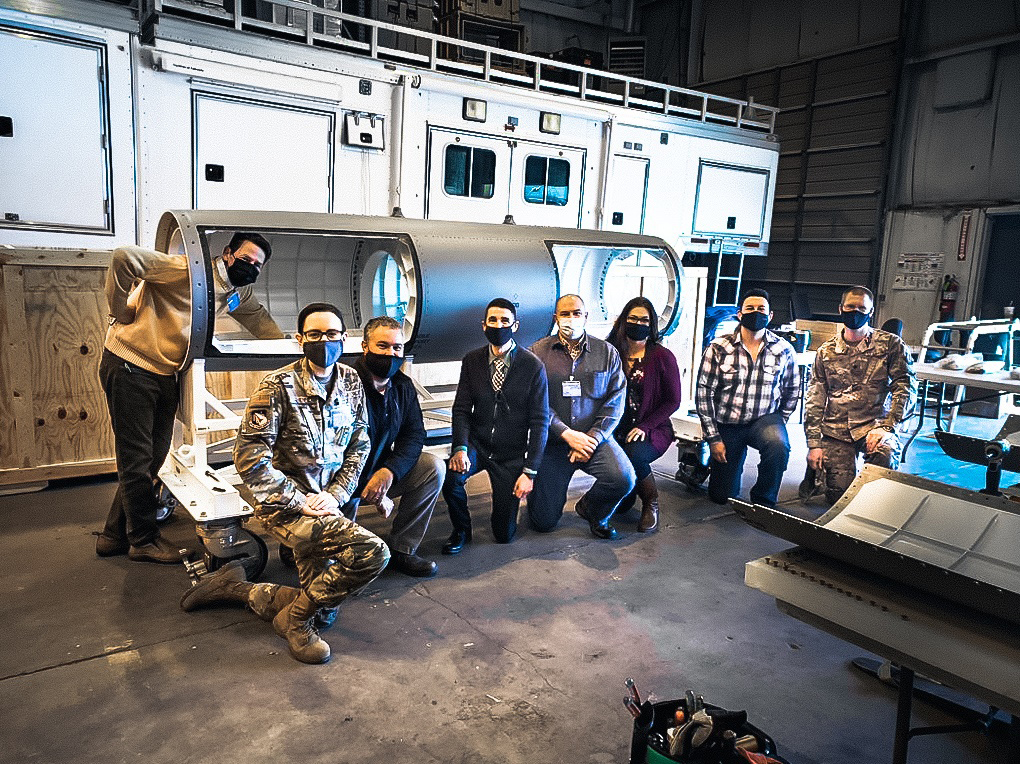 Members of the SHiELD program and their Boeing contractor team inspect the newly arrived SHiELD pod, which will be equipped with additional assembly pieces later this spring. (Photo: courtesy Boeing)