Capt. Terrence McKenna, an Air Force Reserve pilot with the 370th Flight Test Squadron and the Test and Experimentation Lead for AFWERX Agility Prime, participated in remote pilot in control (rPIC) training on the Heaviside aircraft at the Kitty Hawk Corporation’s facility in Palo Alto, California from Dec. 13-17, 2021.

The training culminated in the first government remote piloted flight of an electric Vertical Takeoff and Landing (eVTOL) aircraft when he successfully flew the Heaviside via the Buddy Box System. This first Airman flight demonstrated another key milestone in the collaboration.

Kitty Hawk, in partnership with Agility Prime, is evaluating a training syllabus for their unmanned eVTOL aircraft, the Heaviside. McKenna’s over 15 years of expertise piloting manned aircraft such as the C-5 and the T-38, as well as designing, developing, and testing manned and small unmanned aircraft systems (sUAS) as a civilian engineer, assisted Kitty Hawk’s team of engineers in refining both their product and their training procedures.

Kitty Hawk Corporation was founded in 2010 by Sebastian Thrun and is backed by Google co-founder Larry Page. Their series of Heaviside aircraft are just several in a line of over 20 various eVTOL prototypes. Kitty Hawk is headquartered in Palo Alto, California and conducts much of its testing there. In July 2021, the USAF granted Kitty Hawk airworthiness approval, enabling the company to take advantage of additional testing opportunities through a partnership with Agility Prime.

Josh Lane, a Flight Test Engineer (FTE) for Agility Prime, began working with Kitty Hawk in March 2021 and has collaborated with Kitty Hawk to develop test plans supporting their prototype testing and goals to commercialization.

Focusing on Federal Aviation Administration (FAA) revised Part 23, the safety standards and type certification requirements for small aircraft, and other potentially relevant parts of the Code of Federal Regulations, eVTOL companies like Kitty Hawk gained a greater understanding of the requirements they would have to comply with in order to gain type certification. However, Lane explained that the road to certification for eVTOLs is an ongoing, collaborative process.

“These are new designs that don’t fit the FAA mold, and there’s not a 100 percent fit in some of these companies’ cases, so there’s a lot of engagement going on getting this path to a certified FAA aircraft,” Lane said. “They’re using baseline Parts and working with the FAA to determine what that certification basis is and what areas to be adjusted and addressed.”

McKenna concurred, saying, “Agility Prime is figuring out how we approach training for these types of aircraft. This is a whole new ballpark.”

Named for the English engineer, physicist, and mathematician Oliver Heaviside, the Heaviside is Kitty Hawk’s current flying model. The company has worked through several iterations of this vehicle and are in the planning stages for the next.

The Heaviside was first deployed in 2019 after nearly a decade of development. This aircraft’s maximum takeoff weight is approximately 880 pounds, allowing for a passenger up to about 176 pounds. Heaviside can travel at speeds of roughly 180 miles per hour, but most significantly, it remains quiet: only about 35 decibels at 1,500 feet above ground level, which is slightly louder than a whisper and about 100 times quieter than a helicopter. Additionally, Heaviside has demonstrated 237 transitions between hover and forward flight, as well as a range of 100 miles on a single charge.

Heaviside takes advantage of several advanced technologies, such as Distributed Electric Propulsion (DEP), as this aircraft has eight fully electric propellers. Additionally, Lane explains that Kitty Hawk has refined its use of automated flight capabilities through its Ground Control Station (GCS); engineers can upload a flight plan, telling the vehicle to fly to certain locations, and the Heaviside can perform the entire flight profile without human intervention.

However, a training feature of the Heaviside is the Buddy Box setup, which is a secondary remote controller wired to a primary controller. This system is intended for the use of an instructor and a student performing the duties of an external pilot in manual flight mode; the trainee handles and operates the aircraft while the instructor provides supervision and support.

The Buddy Box system works much like a driver’s education car: the driving instructor is in the passenger seat and allows the student to manually operate the vehicle, but is ultimately in full control and able to brake if necessary. Likewise, for a Buddy Box setup, the instructor can override any direction that the remote pilot in command (rPIC) gives the aircraft from the primary controller.

The Heaviside and future models will not rely on an external pilot for flight operations, but utilizing this training method now affords the opportunity for more immediate and qualitative feedback on the aircraft, while also building out a training syllabus for the GCS operator.

Kitty Hawk utilizes techniques such as Scenario-Based Training (SBT), which is derived from the FAA’s Airmen Certification Standards (ACS) and places the student in lifelike situations in order to complete each lesson objective. Additionally, Kitty Hawk employs Learner-Centered Grading, allowing students to assess their own performance in open conversation with their instructor.

Agility Prime chose McKenna to participate in this training because he fulfilled Kitty Hawk’s trainee prerequisites, which include possessing either a military pilot rating or an FAA Part 107 and 61 certificate. Through a building-block approach, students must also demonstrate proficiency in flying smaller remote control (RC) aircraft, such as fixed-wing aircraft and quadcopter, before graduating to the Heaviside.

During the week in California, McKenna primarily concentrated on the duties of the external pilot, flying in manual mode, rather than automated flight and operating the GCS. Days 1 and 2 focused on ground academics, including simulation training, preflight checklists, and exposure to the Heaviside’s GCS. Inclement weather kept the aircraft grounded, but McKenna reported a productive day of reviewing operations and discussing syllabus development.

Then, on Day 3, after completing several flights on smaller RC aircraft, McKenna successfully piloted the first USAF flight of an Agility Prime sponsored vehicle, navigating the Heaviside through the sky as the External Pilot at Kitty Hawk’s test site. By the end of the day, McKenna had conducted 3 successful flights, focusing on vertical maneuvers, takeoff and landing, manipulation on all axes, auto-hover, and manual flight.
McKenna described that operating as the External Pilot allows pilots to get a feel for what the aircraft is capable of as it moves through the sky.

“It’s a different paradigm for operating the aircraft,” McKenna said. “A crucial thing that the RC controller allows you to do that a completely unmanned or a completely ground-controlled station based approach does not is [gain] that intuition about the flight characteristics of the aircraft that are so important [for operational employment].”
Days 4 and 5 concluded the week by training McKenna on fixed-wing flight, outbound and inbound transitions to vertical flight, and flying full profiles. McKenna reported enthusiastic satisfaction with the tested training methods from Agility Prime, AETC Det 62, and Kitty Hawk.

“I feel very confident in the training [including] pre-study, ground academics, simulation work, and surrogate flights to get us to this point,” McKenna said.

While McKenna indeed learned to remotely pilot the Heaviside, a crucial objective of the weeklong exercise was to evaluate and improve the training plan itself for future operations.

“The main objective is to help collaboratively develop syllabi for these platforms with Kitty Hawk and our AETC detachment [Det 62],” McKenna said.

To monitor and evaluate McKenna’s training process, the Air Education and Training Command (AETC) sent out Det 62 personnel to lend their experience with developing flight training plans. The Det 62 team worked closely with Kitty Hawk and the Agility Prime test team to draft an initial syllabus for McKenna for test and training. The team coordinated with Kitty Hawk’s analysts, as well as Agility Prime, to observe, gather data, review training processes, and conduct detailed debriefs along the way. Moreover, Brittney Tough, Kitty Hawk’s Senior Flight Training Manager, also brought extensive knowledge and experience to the table and served as an asset to government flight test teams.

“There’s an opportunity between the military and the civilians to learn from each other on good practices and approaches to training plan development,” Lane said. “I’m certain that there’s going to be some learning going in both directions.”

Looking forward to the potential military utility of the Heaviside, Lane expressed the vitality of the AETC’s presence at and contribution to the project.
“It’s huge that AETC sent out this detachment, and they’re doing this early work to lower risk and pave the path for integrating one or more of these companies’ systems into military use, and trying to make sure that’s as seamless as possible,” Lane said.

Lane and McKenna both emphasized the importance of Agility Prime’s early involvement and cooperation with industry in order to accelerate the development of the eVTOL market.

“There’s three legs to the stool: training, the aircraft itself, and the logistics to support it,” Lane explained. “The typical goal is to have your training system in place, so that when you field a system, you have people that are ready to use it.”

McKenna spoke to the success of Air Force early involvement through Agility Prime with eVTOL companies like Kitty Hawk.

The first USAF-piloted flight of an eVTOL builds on recent highlights and milestones in the Agility Prime program. On Nov. 10, 2021, Kitty Hawk successfully completed its first beyond visual line of sight (BVLOS) flight during the Ohio Advanced Air Mobility Showcase, organized by FlyOhio, at the Springfield-Beckley Municipal Airport, near Wright-Patterson Air Force Base.

“The Air Force has been a strong partner for us as we bring eVTOLs closer to being ready for human flight,” said Sebastian Thrun, CEO of Kitty Hawk. “In Ohio, we hit an important milestone making us the first UAM provider to fly a remotely-piloted aircraft BVLOS in a non-restricted air space.”

The Heaviside’s utility extends into both the commercial and military worlds. Kitty Hawk hopes to provide a commercial air taxi service, but their eVTOL presents a multitude of opportunities for both civilian and government use.

McKenna noted that potential military and industry use cases largely overlap for the Heaviside: the aircraft could transport injured personnel, evacuate people from hostile territories, deliver cargo or first aid, make emergency medical services more accessible in rural areas or congested cities, and assist with firefighting or search and rescue operations, among many other potential scenarios.

Regardless of how these vehicles are put to use post-certification, Lane drew attention to the practicality of implementing eVTOL aircraft into society. Though Prime focuses on how the Heaviside and its competitors affect the National Airspace System (NAS), new eVTOL technology will impact the entire aviation ecosystem.

“Most simplistically, it’s more than just aircraft; it’s these airsystems and the entire ecosystem that they will fly in and that need to support them,” Lane said. “There’s research and testing activity going on to develop, enhance, and bolster the National Airspace System (NAS) so that we can start incorporating these new capabilities.”
Overall, both McKenna and Lane praised the teamwork necessary to achieve this milestone flight.

“We’re establishing the interaction and the processes to make sure everything is vetted and approved and done in a safe manner,” McKenna said. “It’s a great way to accelerate innovation, supporting industry and keeping up with them. It’s been a great team effort, and I’m excited about how it came together.” 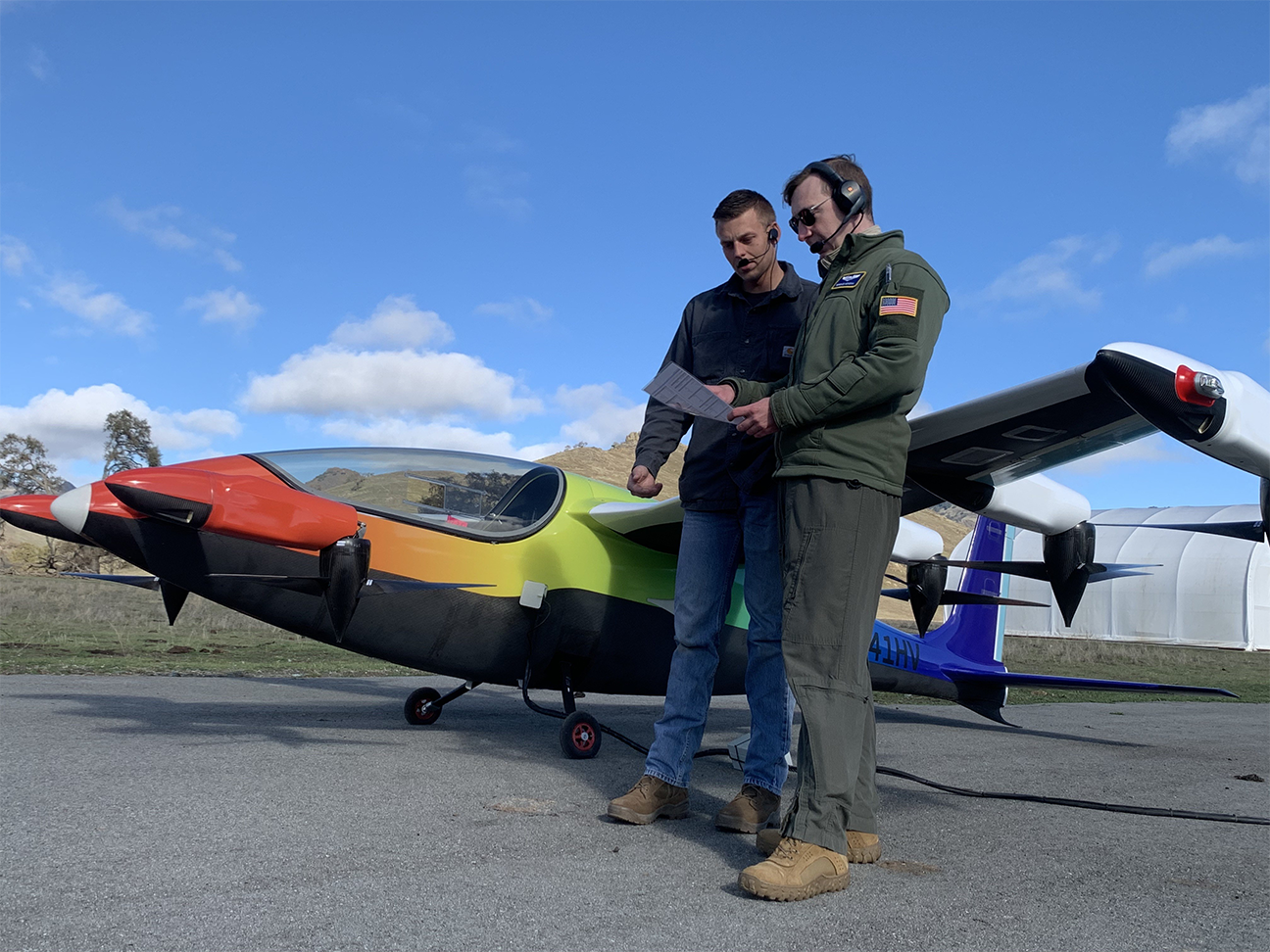 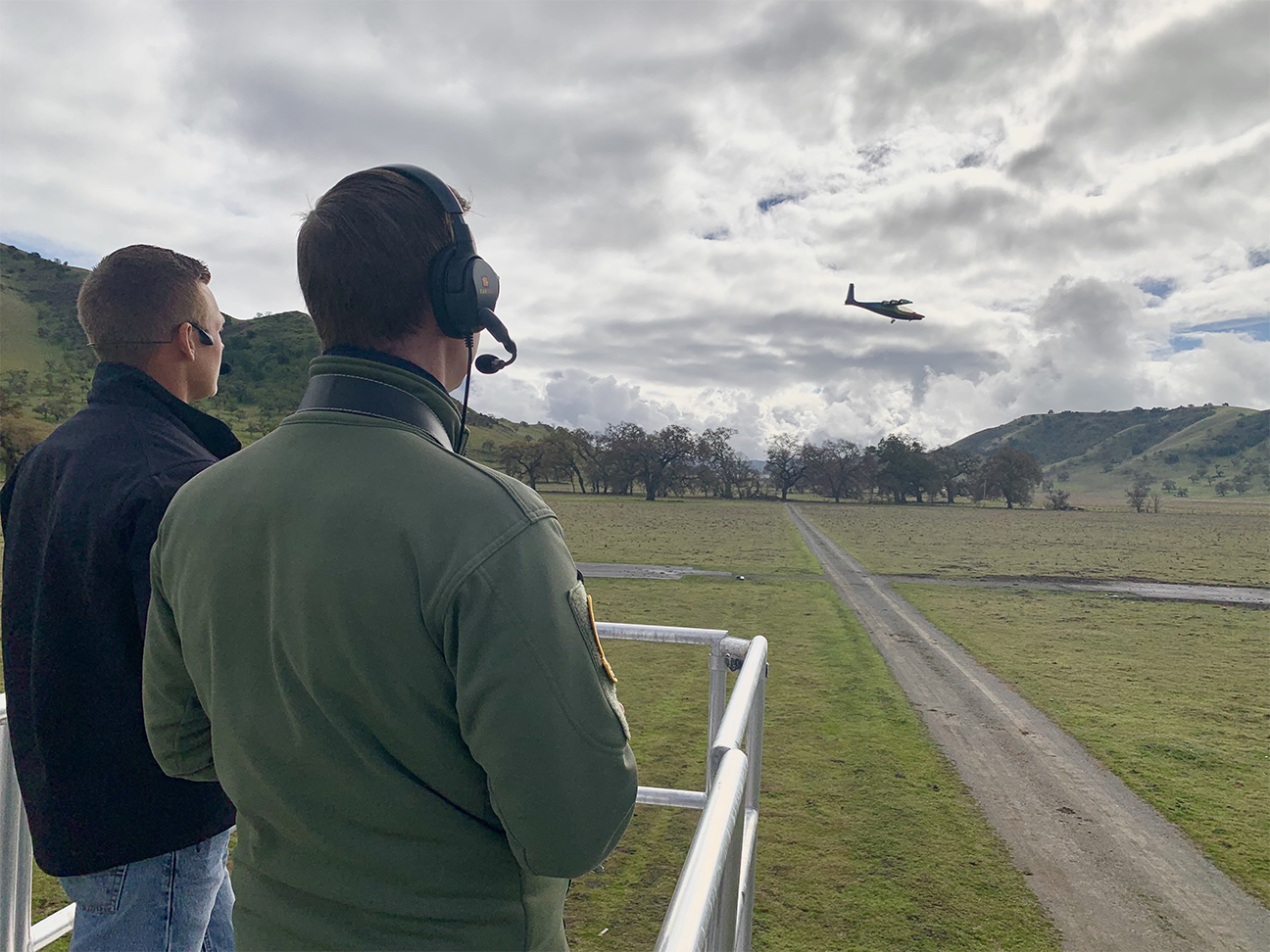 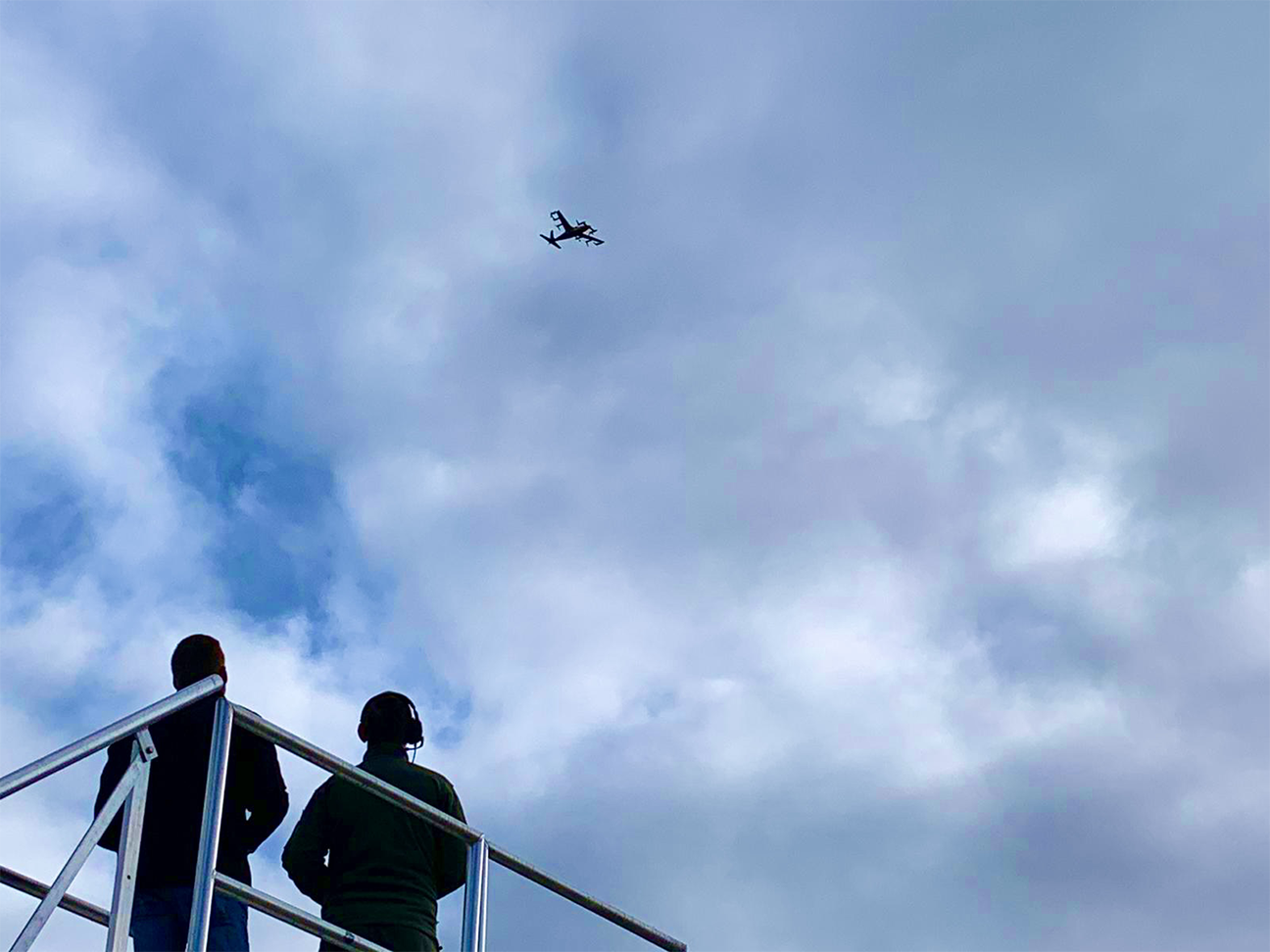 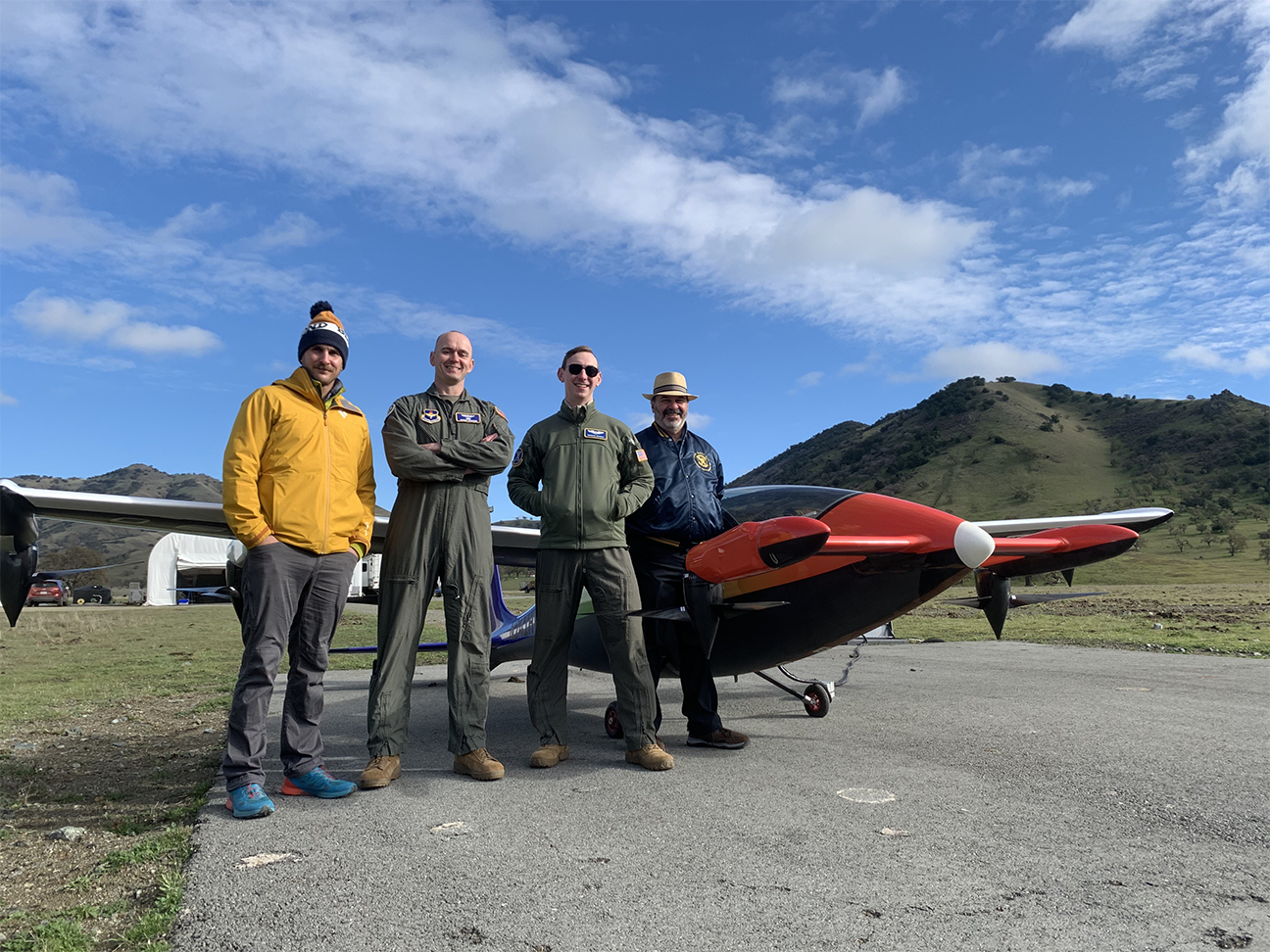 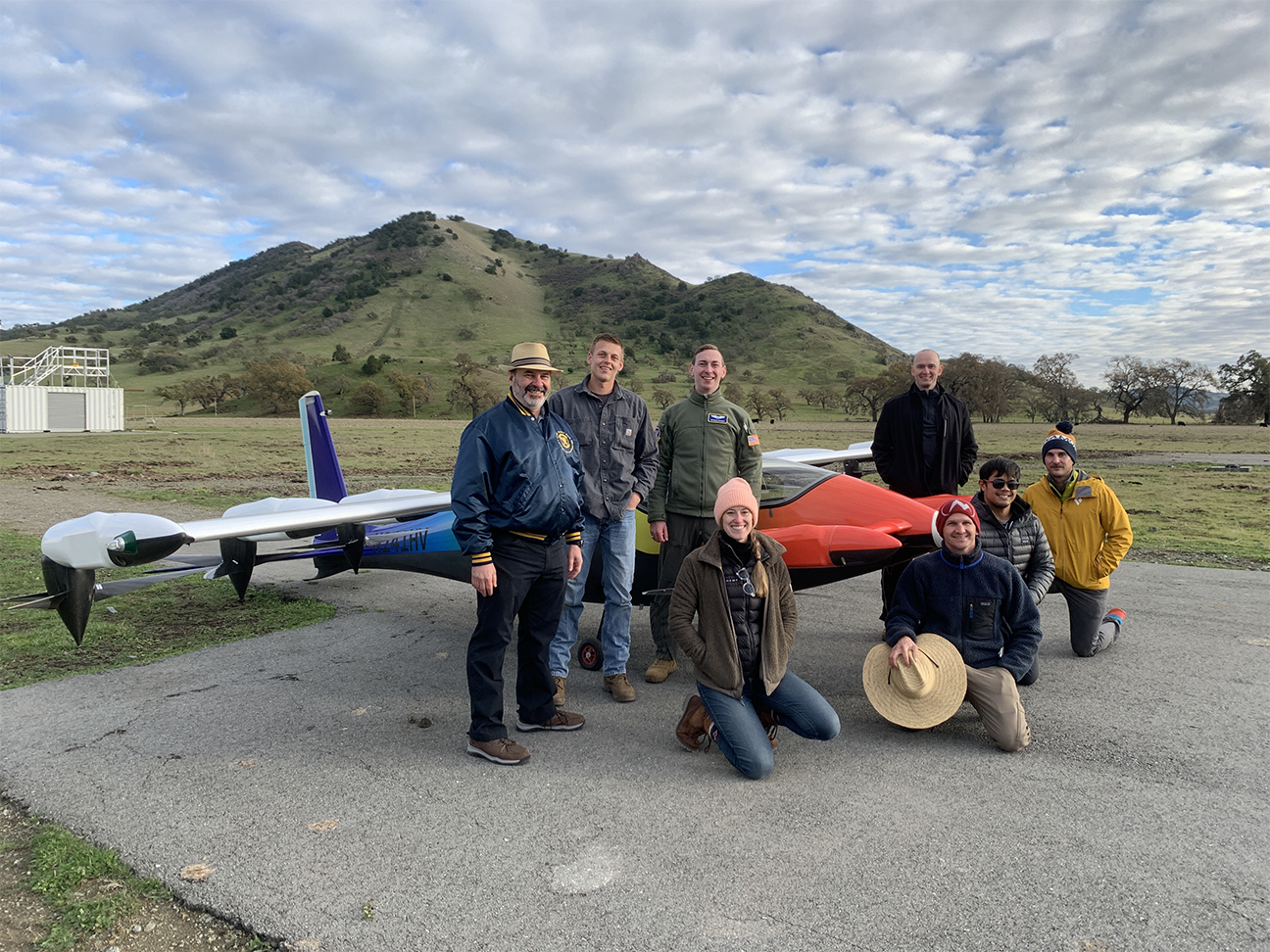