Penn Jet Propulsion is Penn’s first aerospace organization centered on jet propulsion technologies. It is currently a team of 20 passionate students from diverse majors ranging from mechanical engineering to international relations to finance. “Our original goal to manufacture our own jet engine has evolved into much more as we’ve used our school’s most advanced fabrication techniques and recruited students with exciting new ideas,” said David Nemeth, co-president of Penn Jet Propulsion.

After almost two years of work since the first CAD model, the team was successful in building an engine in Penn’s machine shop and hoped to test their engine safely in a test containment vessel. However, while the university was willing to allow them to finish the engine, the group was forbidden from working with combustible fuel without more support and mentorship. “The university was hesitant to allow a student group to run fuel into a jet engine, as there were no faculty with experience in the area who were willing to take responsibility for the critical process,” said Nemeth. Faced with this roadblock in the way of their ambitious goal, the team started to look for solutions.

Through his research of other university teams working on jet engines, Nemeth found that AFRL works with colleges to provide them with a place to test their projects. In fact, several schools had awards presented from AFRL’s Aerospace Systems Directorate through APOP. Having found a potential solution to his team’s problem, Nemeth started to look for ways to join APOP and access mentorship in the construction of their own engine. A quick internet search led him to the Air Force and Space Force Tech Connect website where he used the ‘Share an Idea’ link to submit information about his group’s accomplishments and need for support.

When he submitted the form, Nemeth hoped that his message would reach someone with experience in working with university teams. “It was a bit of a shot in the dark, but I was happy to find that my idea was heard and carefully considered by people rather than an algorithm, and I was quickly put in touch with help,” said Nemeth.

Joshua Laravie, an AFRL Aerospace Systems Directorate Technology Transfer Specialist, Domestic Alliance Program Manager and Tech Connect Team Member, made the final connection between Nemeth’s submission and the directorate’s Small Engine Research Lab and APOP’s technical support team members, 1st Lt. Kavi Muraleetharan and 2nd Lt. James Mostek, both Research Engineers. “The connection was exactly what our team was looking for… we have been exploring other universities who would be interested in expanding the current 12 university (small turbine engine) teams we have,” said Muraleetharan. He also added, “This submission had the potential to expand our knowledge and provide outreach to another group of potential future AFRL-hires. It will result in increased knowledge of small turbine engine uses (i.e. modifications to increase performance to expand operability) and new hires from our outreach program from a prestigious university,” said Murleetharan.

Sharing a similar experience working with Tech Connect, Nemeth said, “The Tech Connect website was easy to navigate and I found the “Share an Idea” submission form very easily. They were very receptive to our ideas and even asked us to present slides for a group of AFRL team members. This network might be hard to find from the surface, but everyone we’ve talked to has been helpful, open to ideas, and willing to share their expertise. I would encourage everyone in our position to get in touch with AFRL!”

Penn Jet Propulsion group intends to continue to leverage their new connections with AFRL to discuss testing with the school safety team and future plans to safely test their engine. They hope to be the foundation of a network that gives them exposure to organizations and aerospace professionals. They believe that their bright engineering team will become huge assets to future aerospace development and partnering with AFRL will allow them to pursue their goals.

The Air Force and Space Force Tech Connect website provides access to current, open opportunities, meet-up events, other Department of the Air Force science and technology enterprise connectors and a way for anyone to share an idea. The Tech Connect team, comprised of AFRL personnel, connects quality, relevant ideas/technologies with Department of the Air Force subject matter experts. The team will review ideas/inquiries, provide feedback on innovative ideas and establish a dialogue with potentially interested Air Force and Space Force programs. For more information, visit: https://airforcetechconnect.org/. 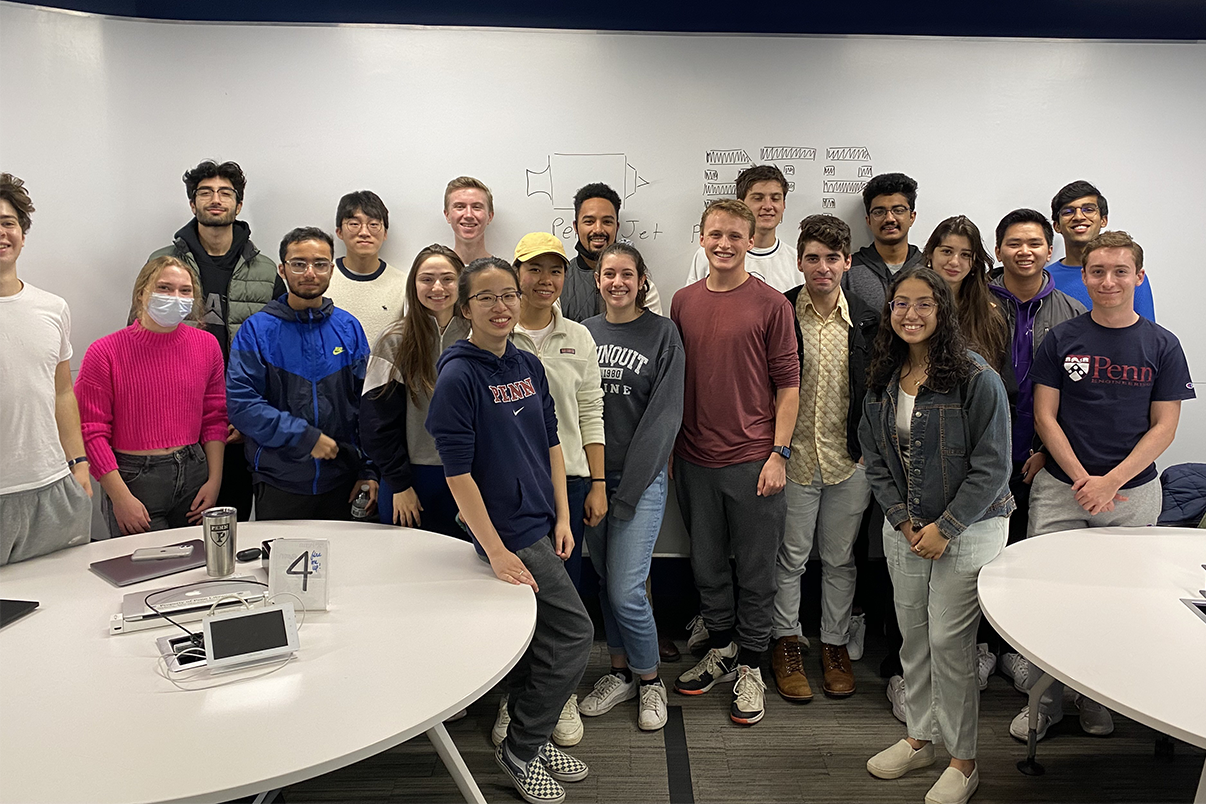 Penn Jet Propulsion is made up of a diverse group of students from all backgrounds with majors ranging from mechanical engineering to systems engineering to international relations. From the original team of four members, the above photo shows the 20 club members that were on the team in Fall 2021. The team continues to attract more members as they begin manufacturing engine components and forming relationships with non-university affiliated organizations. (Courtesy photo) 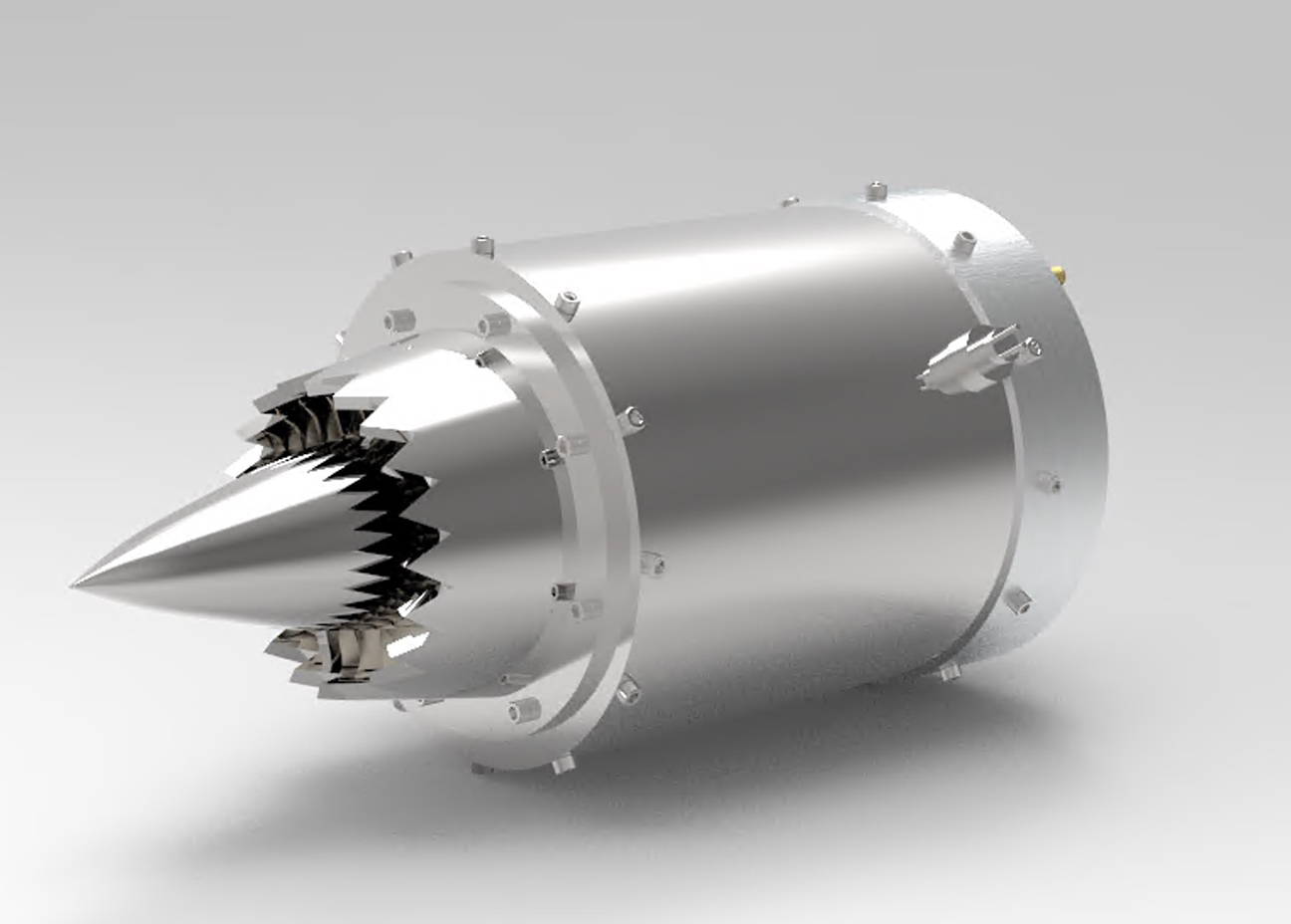 This image shows a 3-D rendering of Penn Jet Propulsion’s original CAD model. Making a full model of the engine was one of the team’s early priorities as a club to attract new members so they could build a team of engineers. The group used this image to help teach new members, called cadets, about the internal workings and thermodynamics of the engine. (Courtesy photo) 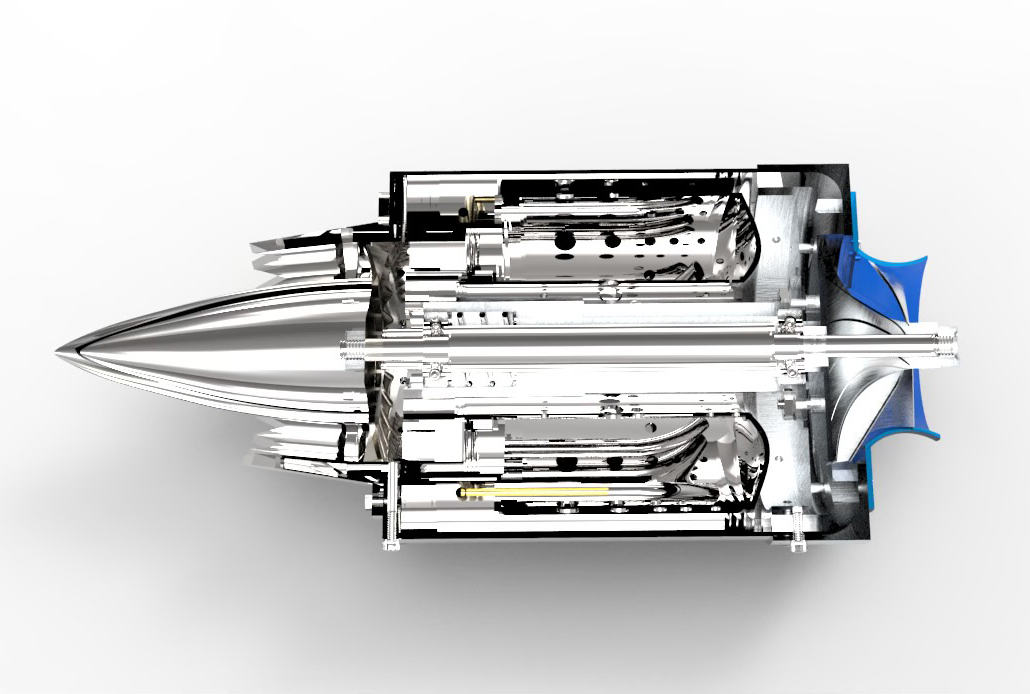