WRIGHT-PATTERSON AIR FORCE BASE, Ohio – Air Force Research Laboratory researchers Drs. Robert Bedford, Luke Bissell, Chandriker Dass and Michael Slocum are finding practical applications for the curious phenomena that occur in quantum materials. Until the late 1990s, the properties — or even the existence — of such materials seemed little more than theoretical. But, what is a quantum material?

Once upon a time, the science of physics dealt mainly with the motion of objects that were big enough to see. Think billiard balls or vibrating guitar strings. But about 100 years ago, physicists began to seriously explore the very small and the very fast, that is, subatomic particles such as electrons or neutrons. It didn’t take long for them to realize that classical physics was just not up to the task of describing the bewildering behavior such particles. Clearly, they were matter, but they also behaved like waves.

“All matter is in a ‘quantum state’ all of the time,” said integrated photonics and optoelectronics team lead Dr. Robert Bedford. “But we typically can’t see that because we are looking at features that are much larger. Rather, what we see is the result of many incoherent quantum phenomena where all of the exciting physics sort of cancel each other out. The “quantum stuff” is there, but we simply aren’t taking advantage of it.”

According to Bedford, however, science has been getting better at taking advantage of quantum phenomena. It is now possible to measure the state of these subatomic particles as well as the very fast interactions between them — or at least to engineer those interactions to make them move more slowly so they can be observed in some way.

As science gains greater understanding of these quantum interactions, manipulating and using them is becoming a reality. Up to now, however, the easiest way to put them to work has been to reduce their temperature, requiring bulky and sensitive cooling equipment and making real-world quantum measurements wholly impractical or even impossible. Therefore, one goal, said Bedford, “is to allow the materials to exhibit the characteristics of these quantum phenomena at room temperature, without the need for such cooling.”

The application that Bedford and Slocum are investigating is to create a navigation tool that could replace the GPS if it ever stops working.

“The high-level motivation,” said Bedford, “is that when we don’t have GPS — and most people agree that if we have a major war, the GPS is going down — we need a different way to navigate.”

Some alternatives such as star-finders or looking at ground features have obvious limitations. For example, the stars are not visible during the day. The best alternative would be to navigate by sensing Earth’s magnetic field.

The magnetic field in question is not the “core field”; that is, the field generated by Earth’s iron core. It is the “crustal field.” The core field is constantly in flux. The north and south magnetic poles both wander over time. The crustal field, in contrast, is consistent and, in Bedford’s words, “impossible to spoof.”

That’s why more sensitive detecting instruments are needed, the kind made possible with quantum materials.

Quantum materials can provide that type of resolution.

Quantum materials provide another clear advantage. “When using classical materials,” said Bedford, “you have to be constantly recalibrating the instruments. In quantum systems there is no need to recalibrate; there is no drift over time. You will always have an absolute measurement.”

But quantum systems have yet another benefit over classical systems. “The instruments would also be more compact than those using classical techniques,” said Bedford.

Although AFRL is not working on a prototype in-house, it is funding the Massachusetts Institute of Technology Lincoln Laboratory, which is working on a magnetometer prototype. “They are expecting to demonstrate a prototype device within the next year or so,” said electronics engineer Dr. Michael Slocum. 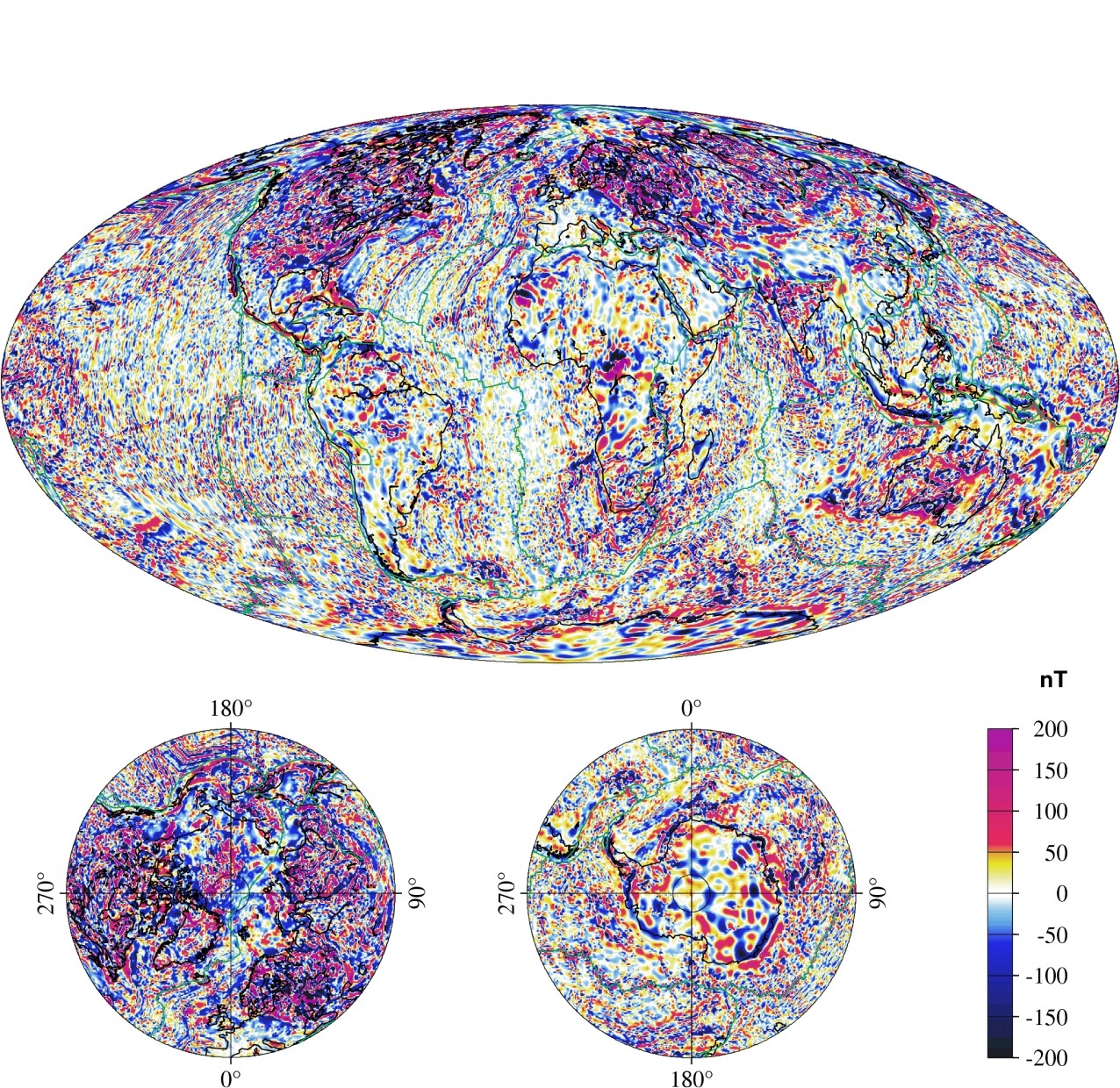 The crustal field, shown here, is weaker than the core field, but is fixed and has features that are useful in non-GPS navigation. The intensity of the fields are measured in nano teslas (nT), shown increasing in strength from blue to red. (Graphic courtesy of NOAA)

Major components of Earth’s magnetic field include the stronger core field, shown here, and the crustal field. The core field is stronger but varies slowly over time. (Courtesy graphic)