WRIGHT-PATTERSON AIR FORCE BASE, Ohio (AFRL) – The U.S. Air Force School of Aerospace Medicine, one of two mission units in the 711th Human Performance Wing, part of the Air Force Research Laboratory, or AFRL, is now home to a total of eight aircraft simulators with various capabilities, which help prepare medical Airmen for aeromedical evacuation, or AE, missions. The simulators are equipped with smoke, sound, fire, cameras and temperature changes, allowing the school to run realistic training.

For the initial overhaul, a Boeing C-17 moved to Randolph and then moved to Ohio in 2015 for completion onsite.

The Boeing C-17 is fairly new in the aircraft world, said Master Sgt. Thomas Harston, new course development manager, En Route Care Training Department at USAFSAM, and the “first one ever built” sits as a simulator at Wright-Patterson Air Force Base.

“It was built as a durability model and so it never flew. This was the ‘concept car,’” Harston added. “They built it just to run it through tests; they tweaked it [and] they ran it through wind tunnels. They did anything they needed to do to see [if] a C-17 [will] fly.”

The C-17 arrived at USAFSAM from Texas with a total project time — from initial training request to completion — was 10 years.

“We are extremely lucky to work with a great team … down in San Antonio at the 502nd TDS, and they do amazing things,” Harston said.

The C-17 was a rusted out shell of an aircraft when the squadron received it, and the 502nd TDS built it into a fully-functional simulator.

“They do the same thing for the Army with helicopters,” Harston added. “But they have upped the medical game … and we have been working with them for probably a decade or more.”

Many of the aircraft used for simulators at USAFSAM are retired, having reached their lifespan, but were turned into useful training tools.

The newest simulator, being built by 502nd TDS technicians, is a Boeing KC-46, built off a Boeing 767 cargo frame, which is a civilian aircraft.

“We fix it up and put a [sound] effects system in it; it has smoke … aircraft sounds [such as] take off, landing,” White said.

White is currently in Ohio working on the KC-46.

The KC-135 is built off of a 707 platform and was moved from Davis Monthan Air Force Base about two years ago. He said the biggest change in the model was adding an updated main circuit breaker panel for realistic training.

“It’s a brand-new plane. They won’t be retiring one for probably 20-30 years, but the training necessity is there because we have to have our technicians competent in every [aircraft],” Harston said.

While pilots specialize flying one aircraft, Harston said, in-flight medical professionals must be familiar with every different airframe.

“If it’s capable of flying a patient, then we need to know how to convert it into a (hospital) platform,” Harston said.

Previously, the students would train on a Lockheed C-130 Hercules simulator, as it was the only simulator at USAFSAM, and return to their home station for additional training on the unit-specific aircraft.

The goal is to have a medical technician come out of the hospital and come through the course at USAFSAM and be deployable, Harston said.

While the base does not see a lot of trauma cases, Harston said, “the reality of the matter is, when we go downrange, that’s what we need to be prepared to do. So around the country, we have set up a bunch of level-one trauma centers.”

Many of the courses, with the exception of the C-STARS courses, go through the simulators at Wright-Patterson.

Each team has a set number of members, but can merge to create a larger team, Harston said. Regardless, the medical professionals must work their way through the simulators.

The courses offered and conducted at USAFSAM focus on trauma-related specialties. There are didactics and simulations, Harston said, so they get classwork and hands-on training.

Harston, as a cadre member, said he starts off each specialty technician — who is clinically competent in their field — by testing them because “during en route care, we don’t get to call codes … nobody is going to come running when you’re 40,000 feet up in the air. We don’t have a pharmacy, we don’t have logistics; we have what we have. And altitude changes the way patients respond to medications or interventions … The military by its nature is meant to fly large amounts of people who aren’t worried about being cold … it’s not meant to be comfortable.”

Medical professionals must account for many considerations when caring for patients in the air, including the amount of equipment and supplies on the aircraft.

“We only have a certain amount of oxygen with us, so we have to do the calculations,” Harston said. “The electrical is … running off of aircraft power which is a different type of power than plugging into your house. So we have to figure out our electrical conversions and what we can actually bring on with us.”

Additionally, when the crew arrives, they do not jump into a ready-made hospital.

“When we show up to a plane it (is a blank space), it doesn’t look like a flying hospital, so we have to convert it to that,” Harston said.

When the students arrive, they must quickly get familiar with the aircraft and begin setting up. Many, however, are in awe when they see some of the simulators in USAFSAM.

With any training, the “wow-factor” and the mistakes must happen on manikins, Harston said.

“When people walk in (the simulator) and say, ‘Oh wow, that’s cool,’ we want all of that gone by the time you graduate,” he added. “It’s not that we are stealing that opportunity from them, we just want (that to happen) here, where there’s manikins (and) cadre.”

The idea is for each aircraft to feel familiar to the medical professionals. The students run through various missions with low lights, cold temperatures, smoke and sounds of the aircraft, as well as learning to react to fires on the aircraft.

“Sometimes low-light conditions are red, and blood is red so then they won’t see it,” Harston said.

The 502nd TDS installs speakers on each simulator to provide cadre the opportunity to throw every scenario at the students. The sound system can run through multiple sounds for the most realistic training.

“If we … button it up and turn out the lights and add the sound and drop the (air conditioning) down, you’ll eventually forget that you’re still sitting on the ground,” Harston said.

While the simulators cannot replicate an aircraft making “hard banks,” he added, they still experience the bass and vibrations.

“We don’t want anyone to have an experience downrange they can’t experience here, because this is the place to do it,” Harston said. “Failure is OK … but we want that failure to happen here so you know how you’re going to get back up.”

The details matter, down to how each bag is set up. When flying with little to no light each medical professional should be able to get into any bag and know where their supplies are.

On some aircraft, the students can easily talk with each other through headsets with the light low and the noise turned up. Communicating with a patient in those conditions, however, can become considerably harder. “Sometimes patients don’t communicate well to begin with,” Harston said.

The difficulty increases further, when there is a three-person medical team, and more than one high-fidelity manikin reacts at the same time. The team trains for the unexpected with the noises and temperatures in either no or low light.

“And honestly that’s one of the most difficult things to deal with,” he added. “The loud environment, you can get used to, but not being able to see what you’re doing is frustrating.”

Each person going through the course is already a qualified medical professional, so they experience myriad scenarios in the simulators to prepare them to be deployable.

The cadre is there to “teach them how to do their craft in this environment,” Harston said. 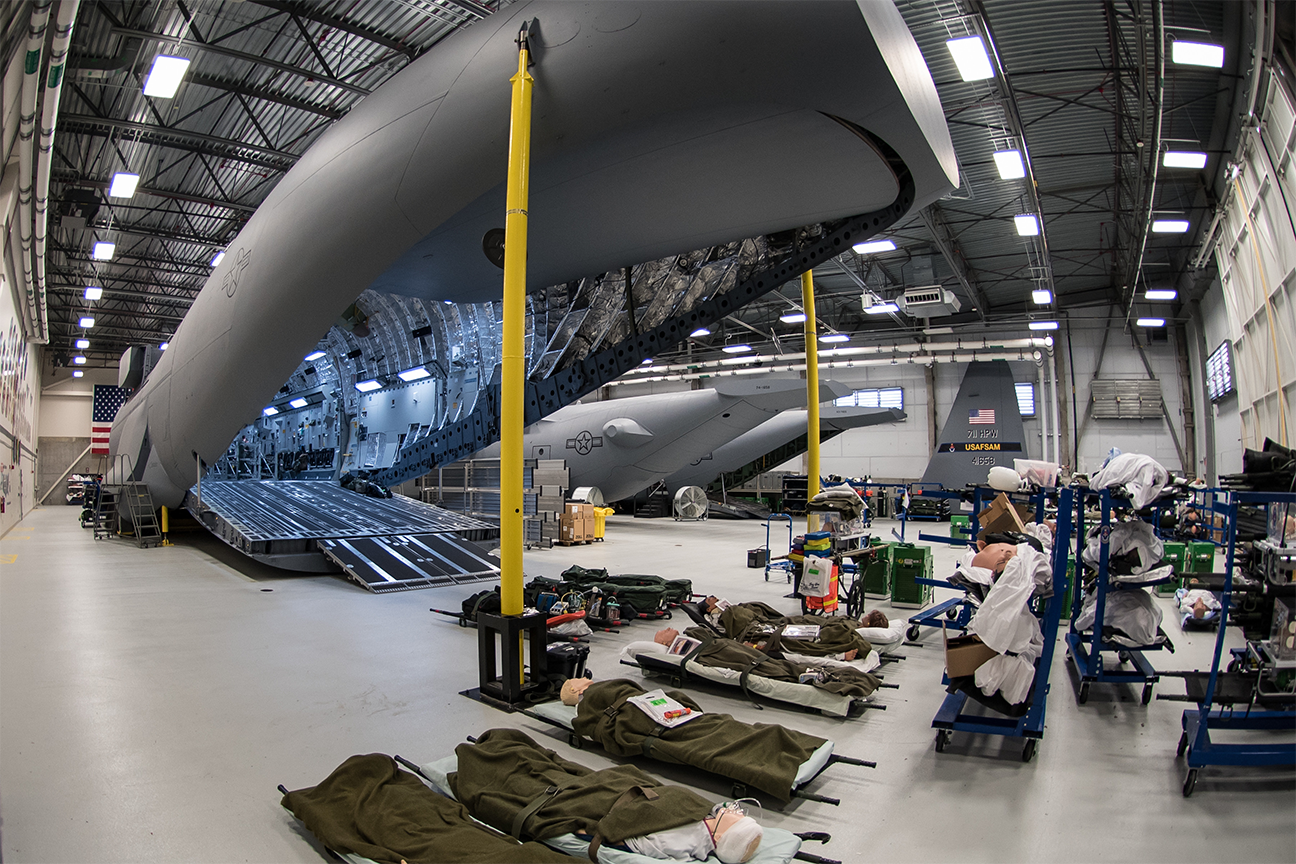 Aircraft simulators in the U.S. Air Force School of Aerospace Medicine, or USAFSAM, building sit empty, ready to be turned into a hospital by medical Airmen for aeromedical evacuation missions. USAFSAM is one of two mission units in the 711th Human Performance Wing, part of the Air Force Research Laboratory at Wright-Patterson Air Force Base, Ohio. The simulators are equipped with smoke, sound, fire, cameras and temperature changes, allowing the school to run realistic training. (U.S. Air Force photo / Richard Eldridge) 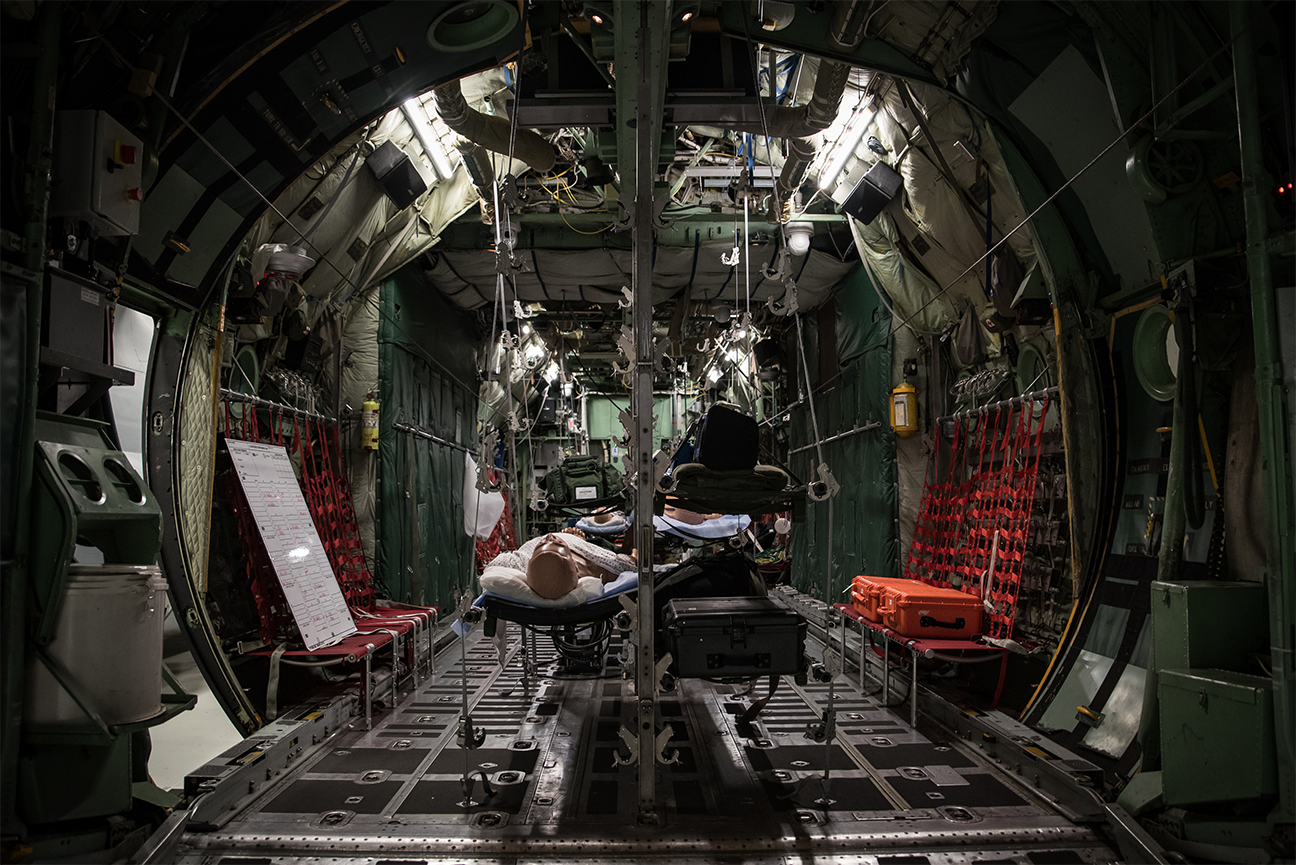 An aircraft simulator in the U.S. Air Force School of Aerospace Medicine, or USAFSAM, building displays a hospital inside an aircraft, ready to use by medical Airmen for aeromedical evacuation missions. USAFSAM is one of two mission units in the 711th Human Performance Wing, part of the Air Force Research Laboratory at Wright-Patterson Air Force Base, Ohio. The simulators are equipped with smoke, sound, fire, cameras and temperature changes, allowing the school to run realistic training. (U.S. Air Force photo / Richard Eldridge) 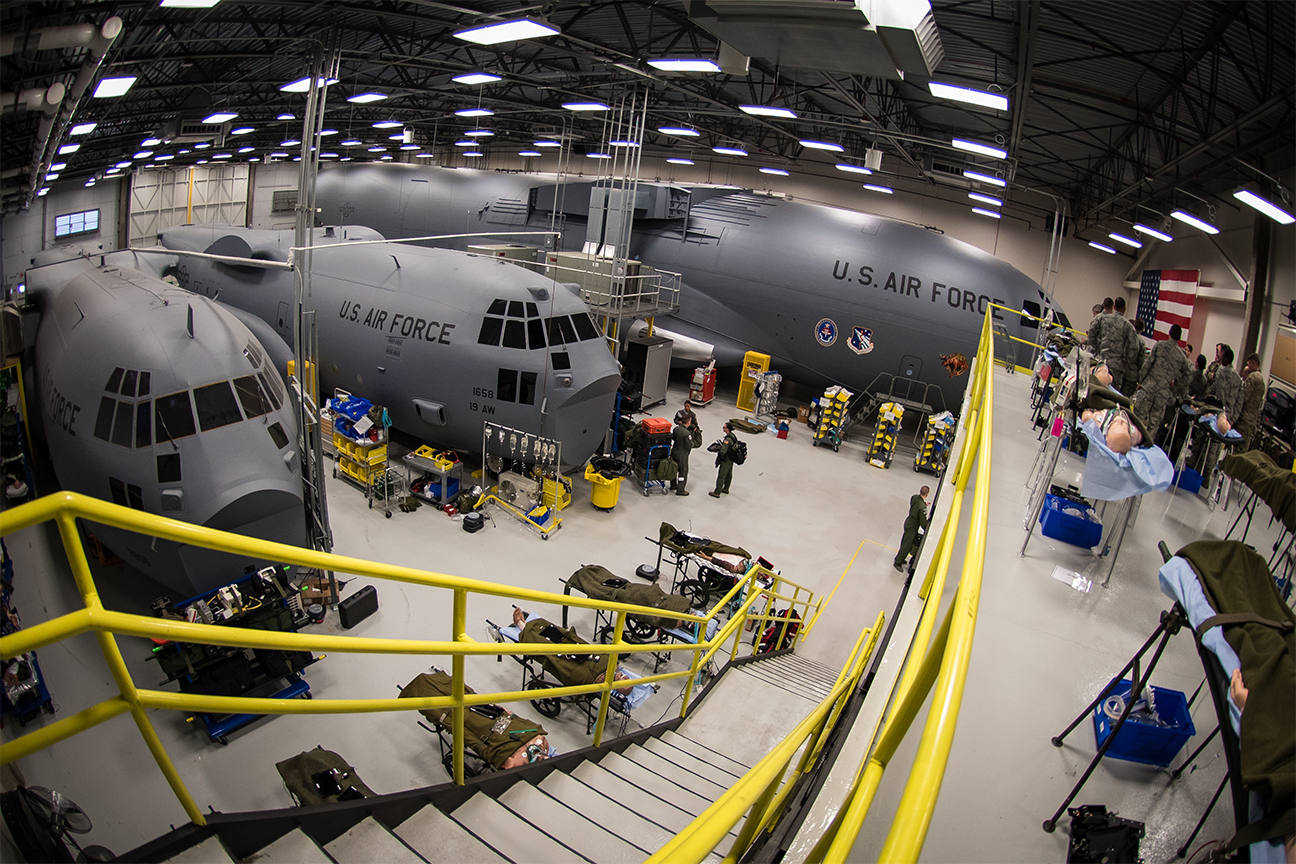