In its final report, the NCMAS provides numerous recommendations to the services, one of which stresses the need for “additional requirements to give greater priority to human safety,” such as the inclusion of “systems for ground and aircraft collision avoidance and spatial disorientation recovery.”

While addressing the human-machine interface (the interaction between the pilot and the aircraft), the NCMAS report cites the successful transition of AFRL’s Automatic Ground Collision Avoidance System, a cutting-edge technology that prevents aircraft from flying into the ground. Fielded on F-16 Block 40/50 aircraft in 2014, Auto GCAS has since saved 10 aircraft and the lives of 11 pilots. The most recent confirmed save occurred in July 2020.

Kevin Price, an AFRL fighter aircraft subject matter expert and retired Air Force F-16 pilot, said that while the team is honored and grateful for the recognition and resulting public awareness, the “greatest reward comes from the knowledge that pilots have come home from missions safely because of Auto GCAS. We are most proud of the precious lives and combat resources (that) have been preserved through this revolutionary, life-saving technology,” he said.

Fielded on the F-35 in 2019, Auto GCAS relies on GPS and a digital terrain database. The system, developed by AFRL in partnership with Lockheed Martin, employs complex algorithms and scans the digital terrain around an aircraft’s current and projected area to initiate an automatic recovery at the last instant to avoid a ground collision.

Auto GCAS saves pilots’ lives by preventing controlled flight into terrain, the most common cause of aircraft losses and fatalities in fighter aircraft. CFIT mishaps include those caused by G-induced loss of consciousness, spatial disorientation, target fixation, distraction, and/or task saturation.

According to Air Force historical data, while ground collisions account for roughly half of all F-16 losses and 75 percent of pilot fatalities; the second largest category of accidents, midair collisions, accounts for approximately 24 percent of losses.

“Looking back, the Air Force has lost [on average] one F-16 per year due to midair collisions,” he notes. Since the last [F-16 mid-air losses] occurred in 2016, Price contends that another loss in the near future would not be a surprise. “That is why I’m passionate about making sure we do what we can to prevent that,” he said. “As a retired fighter pilot, I’ve got a real passion for staying connected to the warfighter and keeping them safe because I’ve been on that side of the fence.”

AFRL ACAT Program Manager Amy Burns said that while Auto ICAS is ready for transition, the system lacks an operationally suitable data link with high-speed data rates and encryption, which would provide the real-time communication required for 360-degree protection. The data link simply connects one aircraft to another, allowing transmission and receipt of digital information, such as location, speed and altitude. Burns explains that sharing this information allows aircraft to “cooperatively de-conflict or smartly avoid each other.”

In 2017, AFRL developed the Auto ICAS algorithms to a high technology readiness level and demonstrated operational suitability in a successful flight test program. However, while the data link used at the time suited development and test efforts, it could not provide a path forward for transition and fielding due to technical and logistical reasons.

Meanwhile, as part of a collaborative program with the United Kingdom, AFRL is developing Auto ICAS for the F-35. While these flight tests will take place during the summer of 2022, Price said that at the end of this program, the F-35 would likely encounter the same transition hurdle as the F-16.

“Resolving the Auto ICAS operational data link technical gap now would directly benefit the F-35 and the F-16 equally by providing a solid path forward for transition of this life saving technology,” he said.

For these two fighter jets alone, the Office of the Secretary of Defense projects that Auto ICAS would save 18 aircraft, eight pilots and $2.2 billion by 2040.

“The bottom line is that fielding Auto ICAS will preserve valuable assets and save pilots’ lives,” Price said, noting that just one technical gap is preventing transition. “Additional development, lab demonstration and flight test efforts are required to get Auto ICAS across the goal line.” 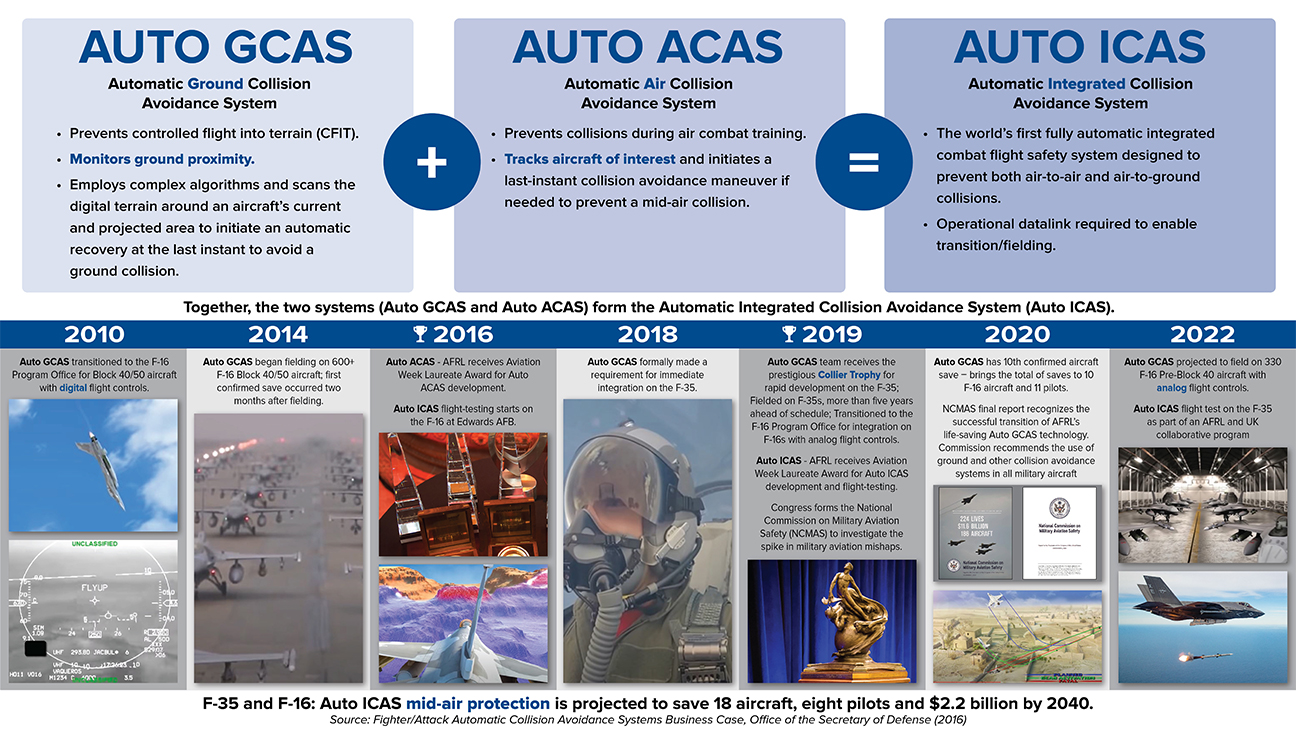 The Automatic Integrated Collision Avoidance System (AUTO ICAS) takes this AFRL-developed safety initiative to the ultimate stage, blending the benefits of ground collision avoidance with the air-to-air element, thus addressing the two highest reasons for fighter jet crashes: controlled flight into terrain and air-to-air collisions. Currently, just one technical gap is preventing transition. Additional development, lab demonstration and flight test efforts are required to get Auto ICAS across the goal line. For two fighter jets alone, the F-16 and the F-35, the Office of the Secretary of Defense projects that Auto ICAS would save 18 aircraft, eight pilots and $2.2 billion by 2040 (U.S. Air Force graphic by Patrick Londergan)