Lab Life brings listeners behind the scenes with Air Force scientists, engineers and professionals who are developing tomorrow’s technologies today.

“I think the coolest part of this job is getting to engage and understand all of the interesting technologies that are out there,” Cooley says on the podcast while discussing what it is like to be the AFRL commander. “Every time I get the opportunity to go out and interact with our smart scientists and researchers, I learn something new about a technological area that is emerging with new opportunities,” he said.

During the podcast, Cooley – himself a technologist, speaks about several areas of interest to AFRL, ranging from biology and human genetics, materials science, high energy laser systems, global positioning systems, space vehicles, low-cost attritable aircraft, how he sees AFRL as a central hub in what he terms as the “science and technology ecosystem,” and what got him interested in physics as a young lieutenant.

Cooley, who has a background in solid state physics and materials systems, discusses some of the things AFRL has done to advance the state of materials systems such as advanced metals, ceramics, or semiconductors is really phenomenal.

“It’s one of the things that really interests me because when I first came in the Air Force as a lieutenant, I was working on molecular beam epitaxy, which is basically crystal growth,” Cooley said.

Cooley also discusses a laser defense program that AFRL’s Directed Energy directorate has been working on called the Self-Protect High Energy Laser Demonstrator, or SHiELD, a program designed to defend an aircraft with a laser system.

SHiELD recently completed a significant test, shooting down missiles in flight to demonstrate that the system can achieve the necessary power levels.

“This anchors the modeling and simulation and analysis that we had done to convince ourselves that it’s not just in the benchtop level laboratory, but when we actually take it out in the field in an operational environment, things behave and act exactly like we predicted. That was a stepping-stone to the next phase of the program to put a laser system on an aircraft and be able to shoot down missiles in flight.”

Cooley, who served as the director of the Global Positioning Systems Directorate at the Space and Missile Systems Center at Los Angeles AFB, California for two years, said GPS is another one of those world-changing technical capabilities.

“Most people confuse their Garmin device or their smart phone with GPS. The service of broadcasting precise timing so that everybody can figure out where they are is provided by the United States Air Force,” he said.  “Today, one cannot imagine a world that is not supported by GPS.”

Cooley said that when he entered active duty, he had the opportunity to learn about things that were fascinating to him such as photovoltaic cells.

While discussing his assignments that shape his experience today, Cooley speaks about acquisition experience he gained while representing satellite programs at the Pentagon, and working with Capitol Hill, as well as his knowledge of the overall national security enterprise while spending a year at the National War College and a tour in Afghanistan.

“It’s important that people have opportunities to see and experience first-hand what it’s like to interact in different environments. Then their eyes are opened and they are like, ‘Oh, wow, I didn’t know this existed.’ I hope to convey my experience, the epiphanies that I have had and share some of the breadths of our National Security enterprise. We need people to engage in this stuff, so come on in and join us,” he said.

About 85 percent of the government employees who work at the AFRL are civilians.

“It takes all of us – all of the talent and different perspectives to make this happen. One quote that I’m fond of is from Gen. Hap Arnold, where he said ‘the first essential in air power is preeminence in research,’” said Cooley. “The research that we do is vital to moving forward and our national security depends on the technological edge AFRL provides.”

To hear Cooley discuss these topics and others, including what he calls “interlocked partnerships,” tune in to “Lab Life,” via multiple ways: 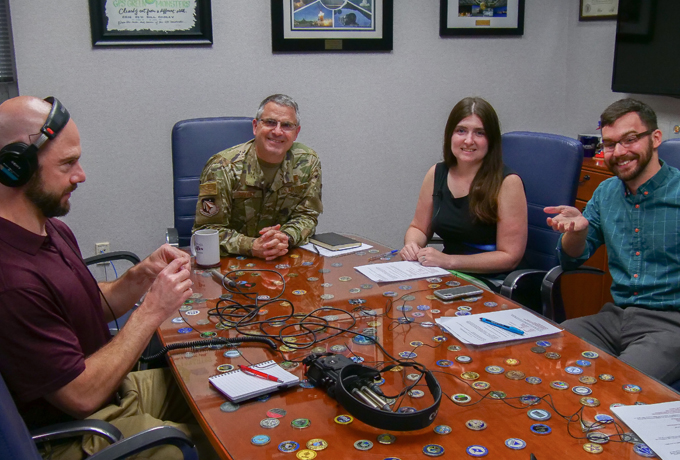