WRIGHT-PATTERSON AIR FORCE BASE, Ohio – Although Leon Plouviez, a graduate scientist from the United Kingdom recently completed a six-month assignment at AFRL, he continues to collaborate with his technical sponsor, Dr. Christopher Schrock, an engineer in the Aerospace Systems Directorate.

“The work doesn’t just stop after the six months,” Plouviez said. “It will continue.”

Plouviez, who participated in the Engineer and Scientist Exchange Program, remains committed to publishing his very first technical paper based on the work he began at AFRL.

ESEP, a Department of Defense initiative, provides assignments for “military and civilian engineers in allied and friendly governments’ organizations and the reciprocal assignment of foreign engineers and scientists in U.S. defense establishments.”

Even though Plouviez is back working for Defence Science and Technology Laboratory (Dstl), Schrock is helping him to finalize a technical paper, since “Leon’s work is worthy of publication.”

Schrock also hopes to collaborate with him on future projects. The pair, who bonded over similar backgrounds in mathematics, will also seek other opportunities for collaboration between AFRL and Dstl colleagues.

Within two weeks of joining the AFRL team, Plouviez submitted an abstract for the 2020 American Institute of Aeronautics and Astronautics (AIAA) Aviation Forum. Ultimately, the AIAA selected his submission and added his work to the conference agenda.

“With everything that’s going on in the world now, this work has given us something that’s tied us together,” Schrock emphasized.

Plouviez agrees. “International cooperation is very important,” he said. “We can accomplish [more] through increased collaboration.”

Dstl, which is the U.K.’s counterpart to AFRL, serves the Ministry of Defence and the British Armed Forces. During his time at AFRL, Plouviez worked in AFRL’s Computational Sciences Center, developing algorithms and techniques to enable computational fluid dynamic analysis of aircraft. Specifically, he focused on the computationally intense area of high order methods for aircraft aerodynamics.

According to the ESEP website, the program aims to “promote international cooperation in military research, development and acquisition through the exchange of defense scientists and engineers.” AFRL’s International Partnership office and the Air Force Office of Scientific Research coordinate job placements in 16 countries.

Plouviez’s time in the U.S. was part of Dstl’s graduate development program, a two-year career rotation with four, six-month placements. While three of those are within Dstl, he chose AFRL for his external assignment.

Plouviez pursued the U.S. opportunity to work for a larger organization and collaborate/network with others in his field.

“Leon’s resume and experience made him kind of tailor fit for our group,” said Schrock.

“He’s not just an engineer,” he added. “Plouviez has a well-rounded background in applied mathematics, which is critical to get up to speed quickly and be an effective member of our team.”

Plouviez described his time with AFRL as incredible saying he enjoyed being able to discuss his work with colleagues who were facing similar technical issues.

“This [open discussion] is something we don’t have in the UK [at Dstl] since only one or two people work in similar areas,” he said. “We’re quite lean.”

“Being with a team and learning [from them] has been quite a benefit to me,” he added.

AFRL selected Dr. Richard Beblo, a research engineer who focuses on the design and analysis of air vehicles, for a six-month assignment in the UK. During his time there, he joined Dstl’s Aerospace Sciences team in the Platform Systems Division and worked on a high-speed missile program.

Beblo said he appreciated Dstl’s focus on technology integration and systems development. He particularly enjoyed the warfighter integration experiences with the military community, which he described as similar to Air Force BLU-ing trips.

During his six-month stay, Beblo went on three such trips. He toured an aircraft carrier, observed Parliament and visited Southwick House, the site where allied leaders planned the Normandy Invasion during World World II.

Beblo, who enjoyed assimilating into another culture, shares similar sentiments with Plouviez and Schrock regarding international relations.

“Considering everything that’s happening today, the U.S. can’t do it alone,” Beblo said.

“If we agree to work together, share results and findings, then we can avoid duplication of efforts and accomplish greater things,” he said

“In the end, we will be stronger.”

Currently, 17 U.S. Air Force military and civilians, including 12 from AFRL, are working overseas as part of ESEP in Australia, France, Germany, Spain, the Netherlands and the United Kingdom. Amid the COVID-19 situation, they will remain in their assigned countries.

“They did not have an option to return to the U.S. early due to the stop movement order,” said Jackie Sukup, AFRL ESEP program officer.

This 60-day measure, enacted by Secretary of Defense Mark Esper, applies to all Department of Defense uniformed and civilian personnel overseas. The order, which intends to prevent further spread of the virus, has delayed one Air Force civilian’s flight home from the UK.

Trips are currently on hold until the DOD lifts the travel ban, Sukup said.

Three foreign nationals from Germany, Japan and Korea are working at various AFRL locations in the Munitions Directorate, Materials and Manufacturing Directorate and in the 711th Human Performance Wing. 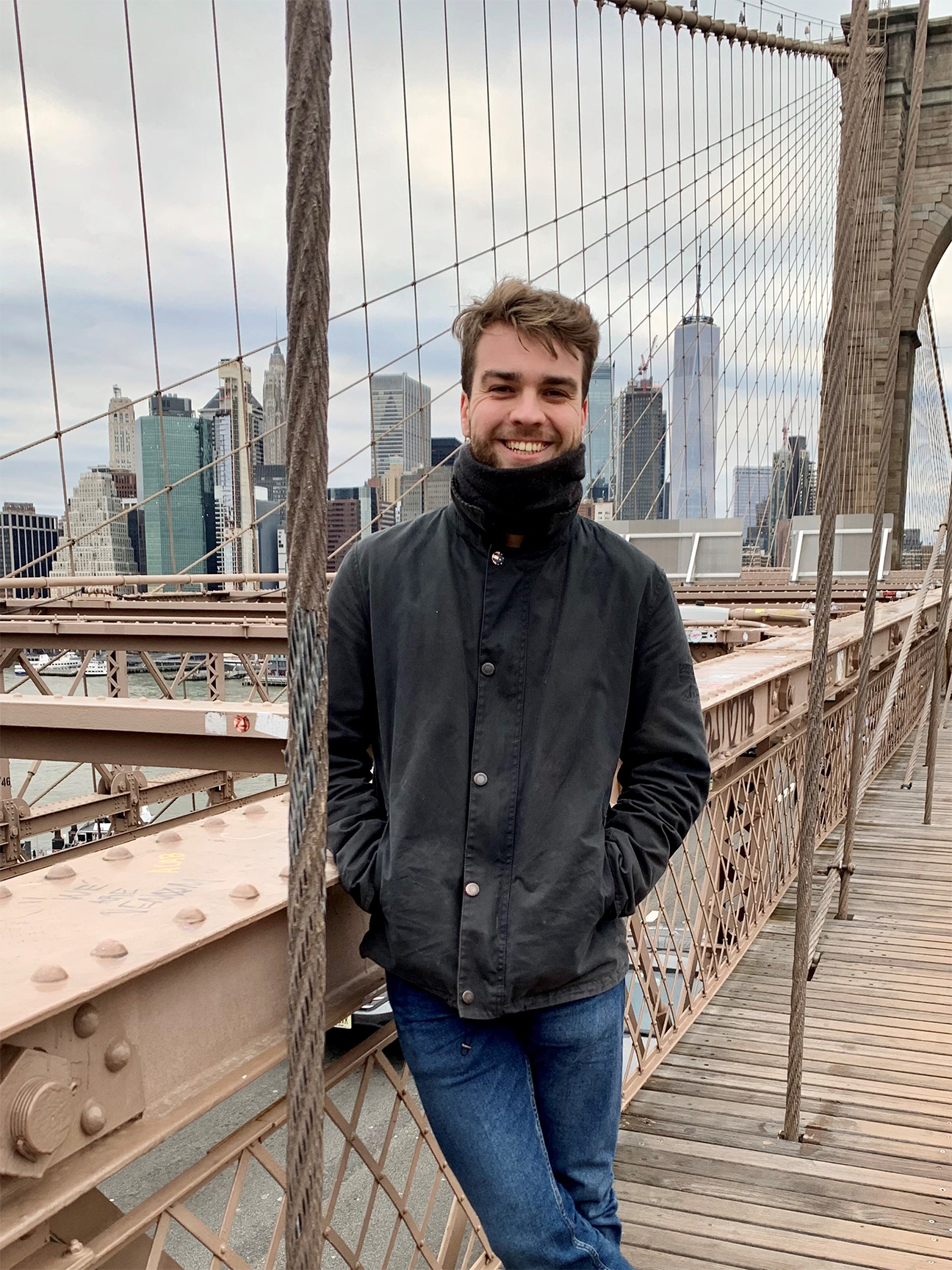 Leon Plouviez, a graduate scientist from the United Kingdom recently completed a six-month assignment at AFRL, as part of the Engineer and Scientist Exchange Program (ESEP). Plouviez’s time in the U.S. was part of Dstl’s graduate development program, a two-year career rotation with four, six-month placements. While three of those are within Dstl, he chose AFRL for his external assignment. While he worked at Wright-Patterson Air Force Base in Dayton, Ohio, he visited New York’s Brooklyn Bridge for the New Year. (Courtesy photo) 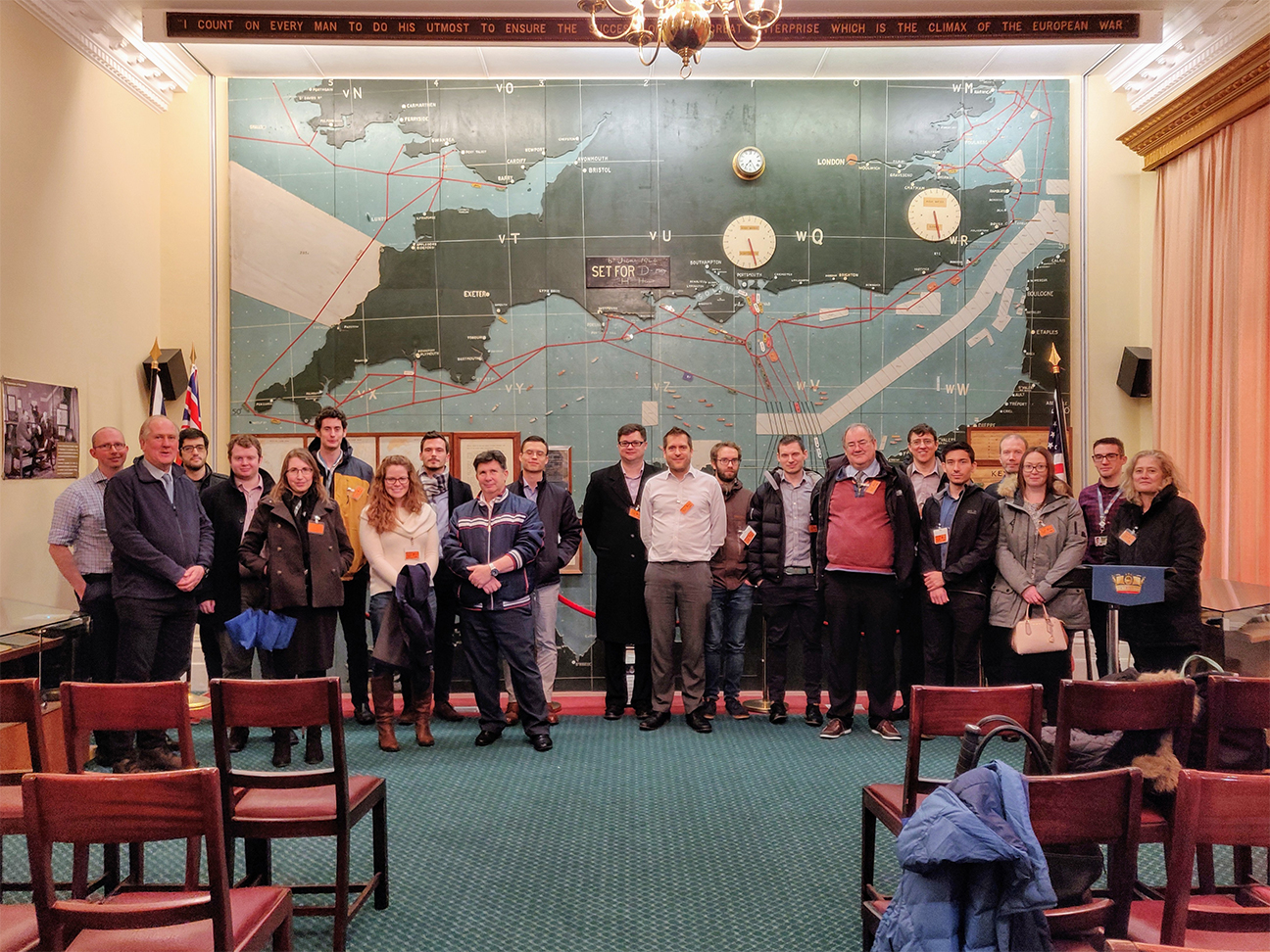 Dr. Richard Beblo, an AFRL research engineer, worked in the United Kingdom for six months as part of the Engineer and Scientist Exchange Program (ESEP). He joined Defence Science and Technology Laboratory (Dstl), the U.K.’s counterpart to AFRL. Beblo particularly enjoyed the warfighter integration experiences, which he described as similar to Air Force BLU-ing trips. He visited Southwick House during one of these trips, the site where allied leaders planned the Normandy invasion. This photo shows him and his Dstl colleagues in the D-day Map Room. (Courtesy photo)