WRIGHT-PATTERSON AIR FORCE BASE, Ohio – What kind of emerging, game-changing technologies are being developed at the Air Force Research Laboratory that are vital for meeting our warfighters’ needs?

Showcasing new technologies gave AFRL a chance to demonstrate how the lab is currently addressing some of the problems encountered by warfighters in the field, as well as how it is implementing the Air Force Science and Technology Strategy for 2030.

“To discuss our customers’ needs firsthand is a tremendous opportunity,” said Cooley. “We are very pleased to have this level of interaction.” Cooley explained further that collaboration with our operational counterparts is critical to achieving AFRL’s mission. To develop and deliver technology that meets warfighters’ needs, “it’s very important for Air Force leaders to maintain open lines of communication,” he said.

“For the ACC Commander to spend so much time with researchers at AFRL was unprecedented,” said Dr. Tim Finegan, the chief of AFRL Commander’s Action Group. He explained that this visit gave AFRL a unique opportunity to demonstrate how researchers address problems that warfighters encounter in the field.

Meeting with researchers in the Aerospace Systems Directorate, Holmes was shown several cutting-edge technologies being developed, with much of the work being done in partnership with private industry. For example, Holmes was briefed on the development of the XQ-58A Valkyrie, a multipurpose, low-cost drone that can be launched and recovered without a runway. The drones can be launched in groups, and because they are relatively inexpensive, losing one would not adversely affect a mission.

As he visited the various Aerospace Systems Directorate labs, Holmes had a chance to learn about several emerging technologies that support the needs of warfighters, for example, using virtual reality to aid in training aircraft maintenance crews. This is expected to result in a huge savings in cost and time, as well as reduce the need for accessing the actual equipment that will eventually be serviced by the technician.

Perhaps one of the most imaginative technologies presented to Holmes during his tour of the Aerospace Systems Directorate lab was “Agility Prime,” a silent vertical lift capability that will be able to quietly and efficiently place troops and supplies in the field.

In Materials and Manufacturing, Holmes saw how additive manufacturing, also known as 3-D printing, may soon become a mission-essential tool, a critical response to an urgent need. Under development is the ability to use additive manufacturing to “print” a replacement aircraft part in the field. This ability will keep aircraft flying instead of on the ground waiting for a part to arrive. Holmes was encouraged by the progress being made by this technology and expressed his desire to see the airworthiness certification process for such parts move more quickly.

Arriving at the 711th Human Performance Wing, Holmes was greeted by wing commander Brig. Gen. Jim Dienst, who presented areas that provide medical education, training and research in support of Air Force operations. They visited the Ground Surgical Team Training Flight Line and the High Bay Trainers, both of which are key areas in the U.S. Air Force School of Aerospace Medicine. Holmes also learned about Operational Vision support to the KC-46, acoustics support to F-35 hardened aircraft shelters around the world, airman-machine teaming and more. “The work you are doing here is very important,” Holmes said to the team after a discussion on personal recovery and survivability measures.

While at USAFSAM, Holmes also watched a live demonstration of the human-rated centrifuge, which included real-time video of the fighter pilot inside experiencing nine Gs, or nine times the force of gravity. The centrifuge, which is the only one of its kind in the Department of Defense, is a safe environment for training aircrew members to withstand high G-forces, preventing vision loss and unconsciousness that can result from such forces during flight.

As he watched the live video stream, Holmes spoke about his own experiences in the centrifuges. He mentioned that when instructors compared his videotaped trial to footage of his son’s, an F-16 pilot, they noted that father and son exhibited identical mannerisms and facial expressions.

Invited guests describe Holmes as highly engaged throughout the tour. “He interacted with the briefers and other leaders, asking questions and sharing personal anecdotes,” said Ken McNulty, a multimedia specialist within AFRL’s Corporate Communication Division.

As the commander of ACC, Holmes is in charge of keeping the entire U.S. Air Force combat-ready. This includes ensuring U.S. sovereignty during peacetime, as well as strategic air defense during war. The ACC was created in 1992 when the Strategic Air Command and Tactical Air Command were phased out and their forces combined. 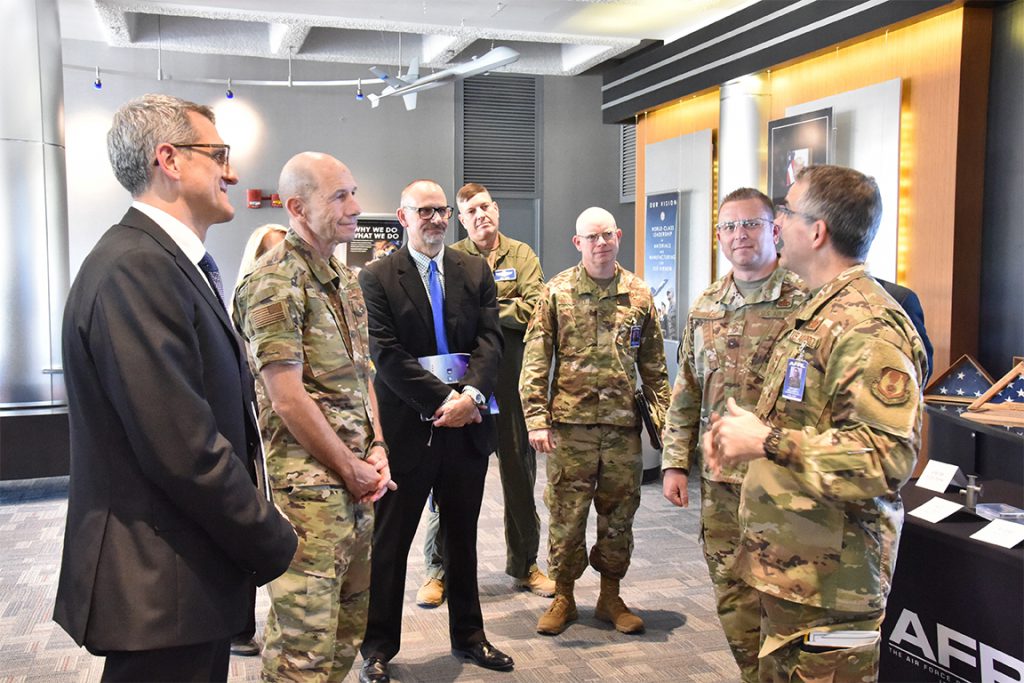