As the nation’s new branch under the Department of Defense, the Space Force was stood up Dec. 20, 2019. Its mission is to protect U.S. and allied interests in space, and provide game-changing space capabilities to its forces, and officers from around the world are joining its ranks.

In a ceremony here Feb. 1, the commander encouraged his young officers, prior to delivering the oath of office.

“As a new member of the Space Force, your mission here does not change,” said Lt. Col. John Zingarelli, commander, Air Force Research Laboratory Detachment 15. “You will continue to lead the discovery and development of critical space technologies for our nation.”

Although Detachment 15 is a small unit, the work accomplished on Haleakala Summit is critical to U.S. space domain awareness, and to providing a strategic advantage in space.

“I’m proud of these new Guardians–they represent the best and brightest minds in the armed forces,” Zingarelli said. “What an exciting time to be in space- you will be on the ground floor as our Space Force shapes its culture and executes its mission.”

Before taking the oath of office, each of the new Guardians exchanged their Air Force insignia for the Space Force insignia. Their duties will remain the same, fulfilling the mission of the Air Force Research Lab – “One AFRL – Two Services.”

“As a native Hawaiian, it’s exciting to have a [Space Force] presence here,” said Capt. Cody Felipe, one of those sworn in Dec. 1. “It’s a great opportunity and exciting to be a part of history, especially for Det. 15, as the island’s first Space Force members.

After Felipe’s graduation from the prestigious U.S. Air Force Academy, he undertook a career broadening experience in space operations, at Vandenberg Air Force Base, Calf. It was there that his interest in space began.

“I realized that the space mission, and the space business was only going to continue to grow, and knew that it was a great opportunity to broaden my various skill sets,” Felipe explained.

This group of scientists and engineers from AFRL are among the first to become United States Space Force Guardians. 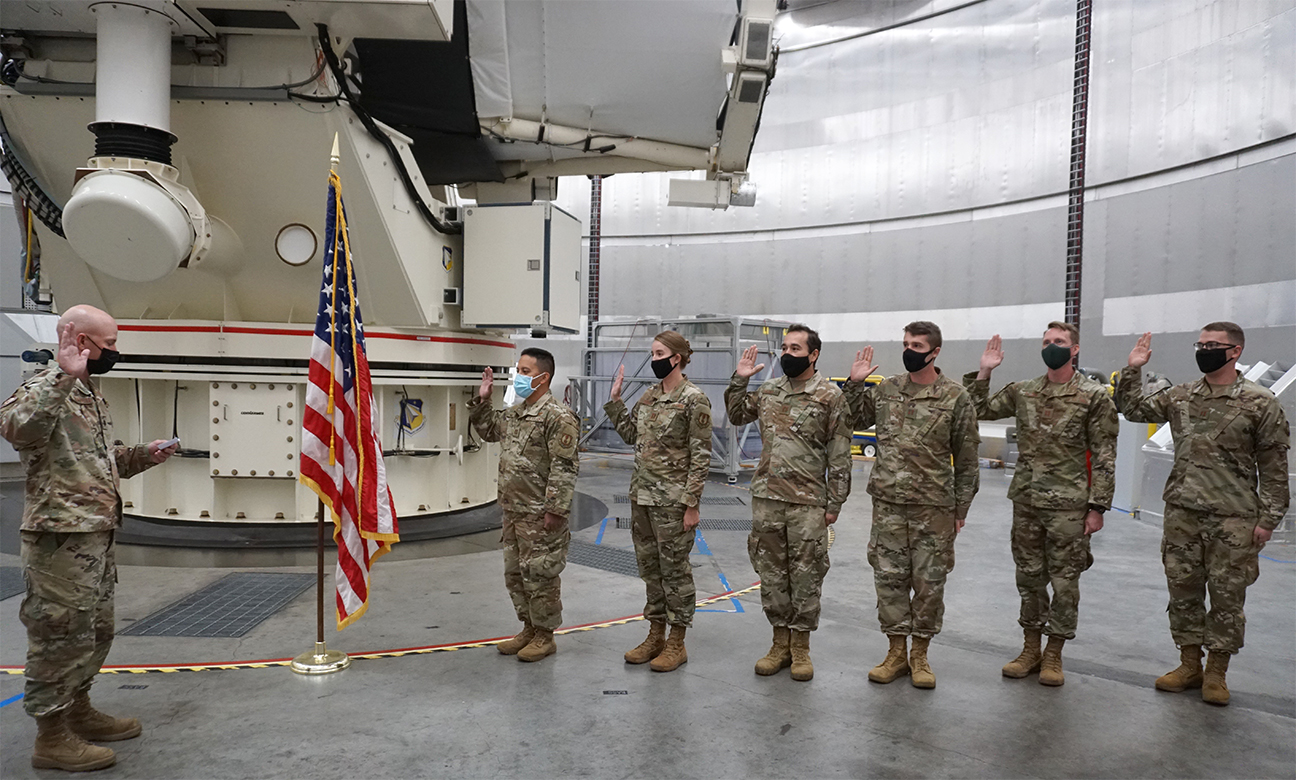 Lt. Col. John Zingarelli administers the oath of office to six Air Force Research Laboratory officers, commissioning them into the U.S. Space Force, in a ceremony held Feb. 1 at AFRL’s Air Force Maui Optical and Supercomputing site on Maui. The ceremony was held at the Haleakala Summit, where the site conducts its telescope operations. (U.S. Air Force photo/Joshua Johnson)