Matthew Niemiec, the autonomous aircraft experiment portfolio lead, said the upgrades to the X-62, also known as the Variable In-flight Stability Test Aircraft, or VISTA, include software that allows it to mimic the performance characteristics of other platforms. He said it also could host a variety of autonomy behaviors, including those from the Skyborg Autonomy Control System and others provided by third-party industry partners.

Skyborg is a Department of the Air Force Vanguard project that has informed the transition of open, modular autonomy to enable combat mass using low-cost uncrewed aircraft. These vehicles will be equipped with autonomy systems and will assist human-piloted aircraft perform critical missions.

“The data generated during these tests, along with feedback provided from our user community, show that in order to rapidly develop and mature tactical autonomy on an appropriate timeline, investment in, and utilization of, a mature, tactically relevant platform is required,” Niemiec said.

The X-62 uses a “safety sandbox” that allows integration and flight of modeled air vehicles, control laws and autonomy capabilities. Unlike the uncrewed aerial vehicles such as the Valkyrie, Mako and Avenger, the X-62 has room for a crew of two, including a pilot who can supervise the autonomy control system’s performance, similar to the way the automotive industry tested autonomous driving features.

“Ground and flight testing on X-62 is one of several steps we are taking to build out critical information networks and physical storage infrastructure necessary to enable rapid autonomy development,” Niemiec said. “The goal by fall 2022 is to have it flying alongside an uncrewed platform, with both using tactically-relevant sensors while flying autonomy behaviors. We’re also building out a robust simulation environment to capture operator feedback and integrate their inputs into our autonomy development process.”

Two systems have been modified in the X-62. One is the VISTA simulation system, which allows the aircraft to mimic the flight characteristics of a different airplane. The other is the system for the autonomous control of the simulation, which enables different autonomous behaviors to fly the airplane.

“When you stitch those two capabilities together, you get a tactically relevant aircraft that enables rapid test of autonomy capabilities while also proving out the interface requirements necessary for different vehicle platforms,” Niemiec said.

“Because we have a safety pilot, we can always turn it off, and improve our throughput for testing autonomy capability by 10 times,’’ Niemiec said.

VISTA’s safety trip system also could automatically disengage the VISTA simulation system when the boundaries of its safety sandbox are violated, allowing larger and riskier steps to be taken with no impact on flight safety, he said.

“The USAF Test Pilot School has been the home of NF-16D VISTA since 2001,” Cotting said. “It has been used to expose students to a wide range of aircraft dynamics, allowing students to experience first-hand both ‘good’ and ‘dangerous’ aircraft after they have been discussed and analyzed in the classroom.”

VISTA has also been a risk mitigation platform for future USAF technologies.

“After a long track record of supporting the [USAF] Test Pilot School and the Air Force, the research systems on the aircraft were becoming dated and unsupportable,” Cotting said.

As part of the transformation into the X-62 VISTA, Lockheed Martin Skunkworks designed the system for Autonomous Control of the Simulation, a new system for VISTA. This highly flexible computer architecture enables VISTA to test a wide range of autonomous systems.

Cotting said the model following algorithm supports a modeling framework that can be openly distributed to researchers.

“Once researchers have integrated their simulation models, the new VISTA simulation system can take those models and easily implement them into the X-62,” he said.

The X-62 VISTA is built to be a technology demonstrator and risk reduction platform. For example, the control laws used to fly the Joint Strike Fighter were first flown on VISTA before the strike fighter’s first flight, reducing significant technical and safety risk.

“VISTA’s simulation framework is flexible enough to allow aircraft designers a chance to fly their aircraft before it ever leaves the ground,” Cotting said. “While modern simulation laboratories are getting much better at simulating aircraft, they still cannot replicate some of the unknowns of operating an aircraft in a relevant flight environment. VISTA and its simulation system allow digital aircraft designs to be ‘flight tested’ before the aircraft is ever built.’’

“VISTA will allow us to parallelize the development and test of cutting edge artificial intelligence techniques with new uncrewed vehicle designs,” he said. “This approach, combined with focused testing on new vehicle systems as they are produced, will rapidly mature autonomy for uncrewed platforms and allow us to deliver tactically relevant capability to our warfighter.” 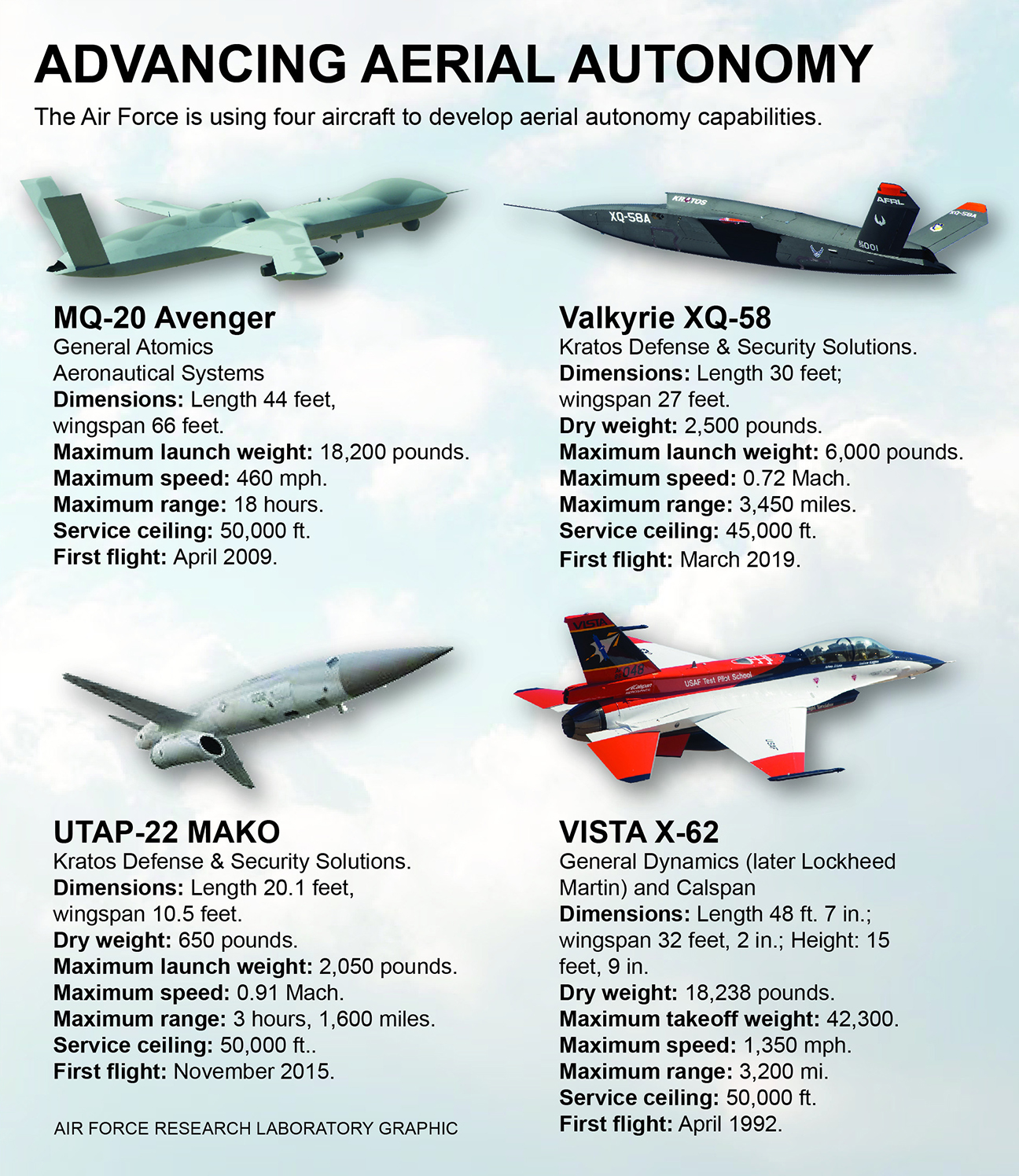