KIRTLAND AIR FORCE BASE, N.M. (AFRL) — Scientists and engineers from the Air Force Research Laboratory are developing a multi-energy electron source, capable of emitting a beam of electrons, at dozens of energies simultaneously.

In a project funded by the Department of Defense, the multi-energy electron device was invented by Dr. Miles Bengtson during his tenure as a graduate student at the University of Colorado Boulder. Following graduation in 2020, Bengtson was offered a postdoctoral position at the AFRL Space Vehicles Directorate’s Spacecraft Charging and Instrument Calibration Lab, or SCICL, with the goal of bringing the multi-energy electron tool from proof of concept to operational status.

Objects in outer space are subjected to the harsh space environment, which consists of energetic electron and proton radiation, and several other factors such as ultraviolet light, thermal cycling and hard vacuum, which may degrade the performance of the spacecraft.

“Researchers at AFRL have long been studying how spacecraft materials and components degrade and evolve over time in the space environment, and have developed technologies to help ensure that spacecraft will fulfill their mission lifetimes, despite prolonged operation in this extreme environment,” said Bengtson.

To test materials, experiments are often conducted in vacuum chambers in which material samples and components are exposed to energetic electron irradiation from a device known as an electron source.

“The problem is that conventional multi-energy electron devices are monoenergetic only — they only emit electrons at one energy — whereas the space environment contains electrons distributed across all energies, simultaneously,” Bengtson said. “Therefore, the environment where spacecraft materials and components are tested is fundamentally different from the environment they operate in.”

AFRL’s multi-energy electron device will give researchers the ability to produce an energetic electron environment in a laboratory, which closely represents the actual space environment.

“The test capabilities we have developed at AFRL will provide scientists, developers, and manufacturers the ability to perform ‘test like you fly’ studies of how materials respond to energetic electron irradiation,” Bengtson said. “The ability to recreate the space electron flux environment with high fidelity in a laboratory, is an enabling technology for a variety of Air Force and Space Force needs, as well as commercial needs.”

Several applications stand out for the use of a multi-energy electron device.

Laboratory testing enables accelerated adaptation of novel/advanced materials for use on spacecraft since relying only on heritage materials hinders the agile implementation of next-generation materials.

It will provide a useful tool for studying material evolution, electrical charging, and electrostatic discharge on satellites, showing how interactions with the space environment can lead to satellite anomalies.

“The Spacecraft Charging and Instrument Calibration Lab studies how reflectance spectra from satellites can be used to remotely and passively characterize objects in space,” Bengtson said. “For example, the object called 2020SO was initially thought to be an asteroid passing near the Earth. However, by analyzing the spectra of sunlight reflected off the object, further research determined that it was made out of stainless steel, not asteroid material. This led to the realization the object was actually a spent Centaur rocket body from the Gemini era,” said Bengtson, noting “the multi-energy device enables accurate study of how reflectance spectra change with time on orbit, which was crucial for this endeavor.”

Ryan Hoffmann leads the SCICL and is proud of the technology advances his lab has made in studying spacecraft materials to improve satellite robustness and resiliency, and develop space domain awareness tools.

“SCICL is a world-class research laboratory and our exploration into this multi-energy electron source is an example of the progress AFRL is making in the study of the space environment on spacecraft,” Hoffmann said. “Our team is at an advanced prototype stage in the development of the multi-energy electron device. I am excited to say, we have built two prototypes so far, that have demonstrated basic functionality, and are building an advanced prototype now, which will be very close to a fully operational model.” 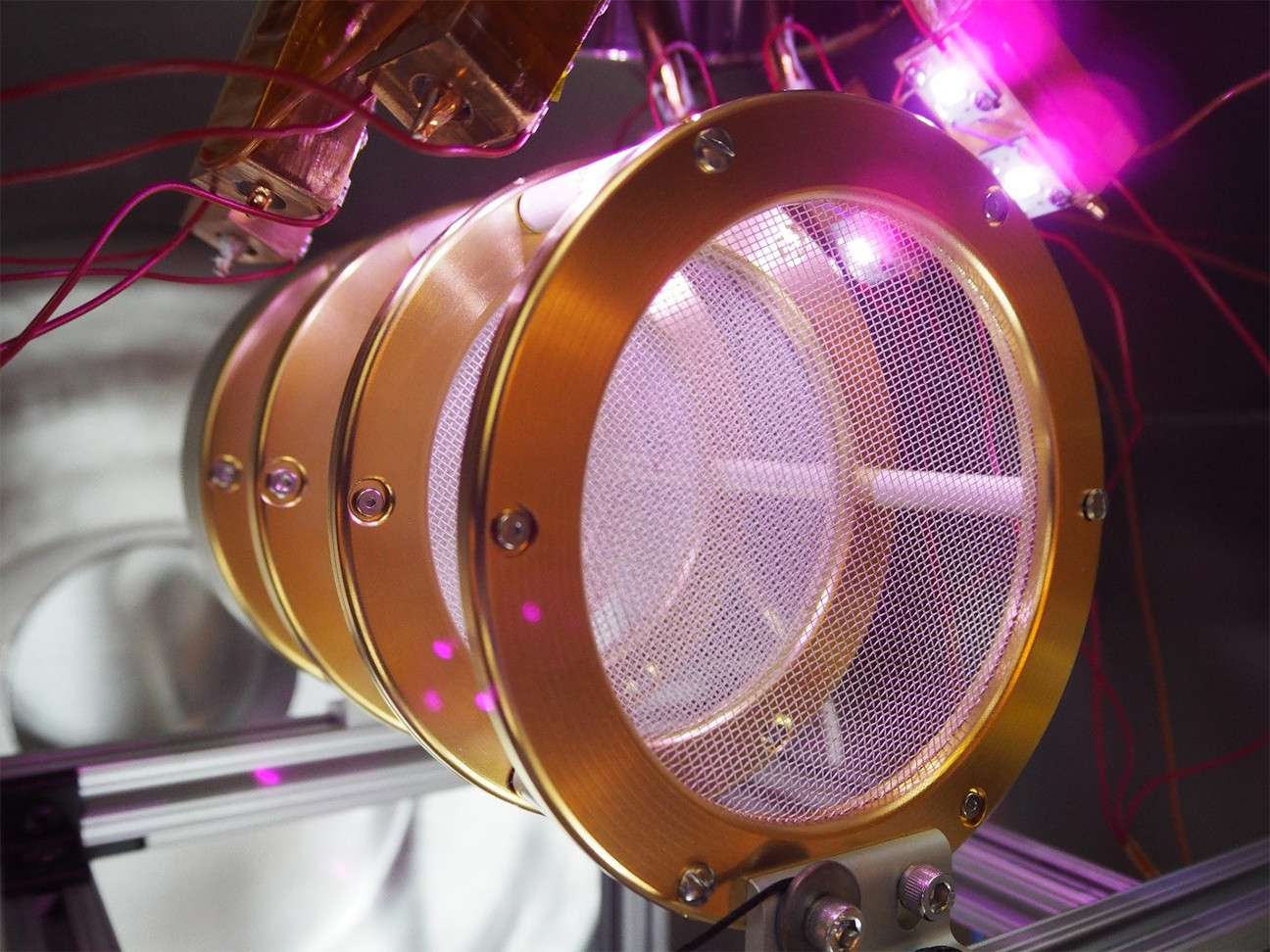 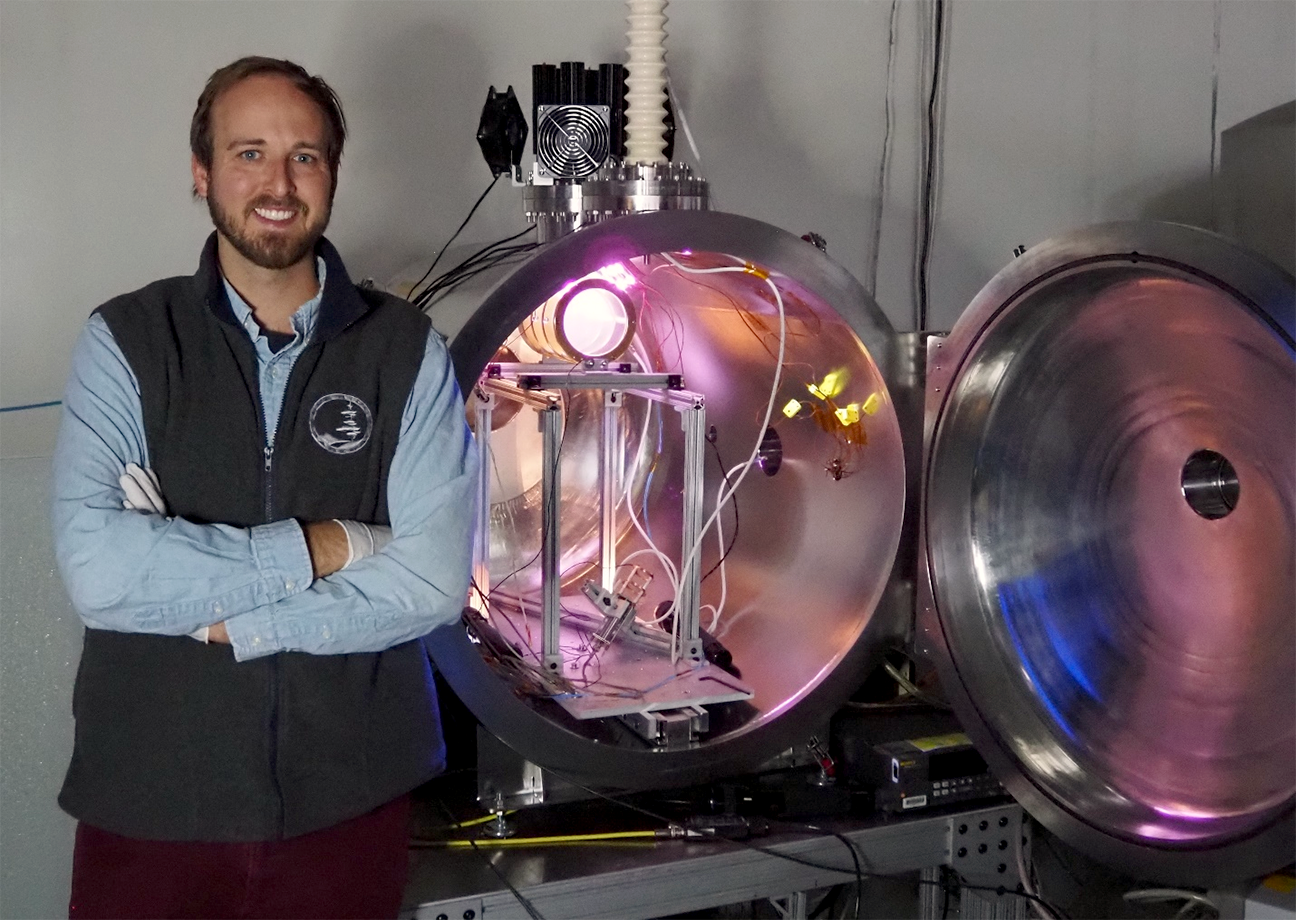 Dr. Miles Bengtson, an Air Force Research Laboratory postdoctoral scientist, stands next to the vacuum chamber in the AFRL Space Vehicles Directorate’s Spacecraft Charging and Instrument Calibration Lab at Kirtland Air Force Base, N.M. in which a multi-energy electron source is developed and tested.