She was a project engineer in the Air Force Research Laboratory Materials and Manufacturing Directorate — an internationally recognized subject matter expert on the Rare Earth Element Supply Chain and a liaison between governments, industry, and academia. In the Materials and Manufacturing Directorate, she oversaw more than $70 million of programs for the Space and Rare Earth Industrial Base.

When the COVID-19 pandemic began, she quickly secured more than $100 million in federal relief funding, leading to the preservation of hundreds of specialized jobs and capabilities for the military marine vessel and aircraft propulsion industrial bases.

Now, she leads the AFRL Commander’s Action Group (CAG), with a whole new set of challenges.

Brannum, 30, manages a team that ensures the commander and other senior leaders have everything they need to support the multi-billion-dollar enterprise.

“As CAG Chief, my main priority is my team,” Brannum said. “My goal stepping into the position was to put people first — to support their goals and advocate for them.

“The CAG carries a large workload and has an incredible team of high performers. It is my priority to ensure they are happy, fulfilled, and finding a good balance.”

“I have enjoyed working with Michelle since Day 1,” Pringle said. “She brings such an optimistic personality to a mountain of hard work – and everything she touches ends up picture-perfect.”

“She jumped in, partnered with a number of AFRL superstars and turned what was a routine brief into an “AFRL Wow” production,” Pringle said.

“Michelle is a joy to be around and makes every task better — a special unicorn among our many AFRL Unicorns!”

FROM INTERN TO THE CAG

That she even works for the Air Force is a case of her persistence paying off.

Brannum was introduced to the Department of Defense (DOD) when her undergraduate mentor at Virginia Tech told her about the Science, Mathematics and Research for Transformation (SMART) Scholarship-for-Service.

“It was a way for me to get my foot in the door with the DOD,” she said.

Brannum said she unsuccessfully applied for the scholarship “numerous times” as an undergraduate.
As a second-year graduate student, she met AFRL Chief Scientist Dr. Timothy Bunning, who at the time was the Chief Scientist in the AFRL Materials and Manufacturing Directorate.

“I spoke with him for about five minutes at a meet-and-greet before he gave a seminar talk to the Macromolecular Science and Engineering Department at Case Western Reserve University,” she said.

“I asked him one question, ‘What do I need to do to get the SMART Scholarship?’ And to my surprise, his advice worked!’’

“She exhibited a ‘balance’ about her that was broader than the average Ph.D. student,” he said. “She was naturally inquisitive, exuded confidence, and was a great communicator.”

As part of the scholarship, she was assigned to Bunning’s Materials and Manufacturing Directorate in 2015.

“I remember her having to get up and speak at a conference on behalf of her advisor on a subject matter much broader than her Ph.D. research and she just hit it out of the park,” he said.

Now that Bunning is AFRL Chief Technology Officer, he sees Brannum bringing the same energy and innovation to the commander’s team.

“She is thinking out of the box,” he said. “She is attempting to reimage the CAG, using 21st century tools, and a dose of old fashioned face-to-face communication.”

Her scholarly research has appeared in publications including Advanced Optical Materials and Macromolecules.

“In the EAPO, I was exposed to, in my opinion, some of the most creative acquisitions that might exist in the Department of the Air Force,” she said. “The contracting, policy, and legal professionals that I worked with taught me that, with imagination and proper documentation, anything is possible.”

In August 2020, she joined the AFRL Commander’s Action Group as Communications Lead, where she crafted speeches, briefings and documents for AFRL Commander Maj. Gen. Heather Pringle and other top lab leaders.

“I always knew that I was not meant to do research, but that I was meant to enable and foster those who do the research. I have a patience and excitement for government bureaucracy. I see government processes and policy as one massive puzzle that requires creativity and persistence to understand and overcome.”

Brannum is originally from Connecticut and grew up in Virginia, near Washington, D.C.

She said, “amazing teachers and role models” set her on her life’s path, but the road was not always smooth and straight.

“As a kid, I went through a few phases,” she said. “I first imagined I would become an interior designer because of my love for the television show “Trading Spaces.”

“About once a week, I would beg my mom to let me reorganize the furniture in my room and would spend hours drawing out schematics for her. She usually said no, but I was too stubborn and would wait until my parents fell asleep. Then, would go about rearranging the furniture on my own as quietly as possible into the late hours of the night.

“I then went through a phase where I wanted to be a lawyer. I even took on the role of prosecutor in a mock trial in middle school.”

Her brief interest in marine biology ended in her freshman year of high school, when she struggled through her first biology class.

“The systems in the human body were already too difficult for me,” she said.

Sophomore chemistry was a challenge for her, too — at first.

“Like biology, chemistry required me to memorize so much,” Brannum said. “However, Mrs. Gill finally found a way to appeal to my learning, with structure and a little bit of algebra, which I already mastered in middle school. Something about her teaching style and the meticulous organization in her classroom made Chemistry easy.”

“In addition to chemistry, I was blessed with multiple years of physics with Mrs. Modugno. Mrs. Modugno is the gold standard for teaching. She not only made learning fun, with hands on experimentation, but she also taught me how to study, how to fail, and how to get back up and try again.”

Dr. Brannum added that her parents and siblings also were “outstanding role models.”

“My father got a degree in Electrical Engineering, my mother was an incredible mathematician, and both my older siblings pursued degrees in science and/or engineering and went on to get doctorates,” she said.

Another surprising source of inspiration that has helped guide her life’s course – self-help books.

“Self-help books have helped me to recognize, change, and create patterns in my life that have enabled me to get where I am today,” she said. “They have inspired me to do things I never thought I could, like train for a marathon, become a morning person, and lose weight.

A few she recommends are “The Miracle Morning by Hal Elrod, “The 4-Hour Body” by Tim Ferris, “The Richest Man in Babylon” by George Samuel Clason, “The Happiness Project” by Gretchen Rubin, and “Awaken the Giant Within” by Tony Robbins.

“These books and authors have taught me so much about myself and prepared me for this supervisory position. It sounds corny but the self-help genre has changed my life and I wish I found it sooner — like in high school!”

Above all, she said her husband Daniel Brannum has been “a huge source of inspiration and incredible support system.”

She met him in graduate school at Case Western, where they studied under the same advisor. “He’s ‘Dr. Brannum No. 2’ – that’s our running joke.”
In their off hours, they renovate a home they bought at auction; spend time with local family; and care for a dog named Jelly, and nine chickens.

Brannum formerly also worked as a wedding planner and volunteered to coordinate weddings to gain experience and build connections. She said she had to give it up when the travel demands of her job in the Materials and Manufacturing Directorate became too great for her to be a reliable planner for couples.

“What I really loved about wedding planning was seeing how much stress and anxiety I was taking away from the couple and their families,” she said. “I made it possible for them to enjoy the wedding planning process and to be present in every moment on their wedding day.

“Wedding planning brought me so much joy. Not only was it an outlet to express myself creatively, but it gave me the opportunity to see people at their best and most vulnerable. To see love in its purest and rawest form.”

Her advice to college students and young scientists just starting out? Be persistent.

“It isn’t all about what you look like on paper,” she said. “I got where I am today by going out of my way to talk to people.”

“I knew that if I could talk to someone, I could convince them that I could be of value to them and their team no matter what my qualifications were on paper.” 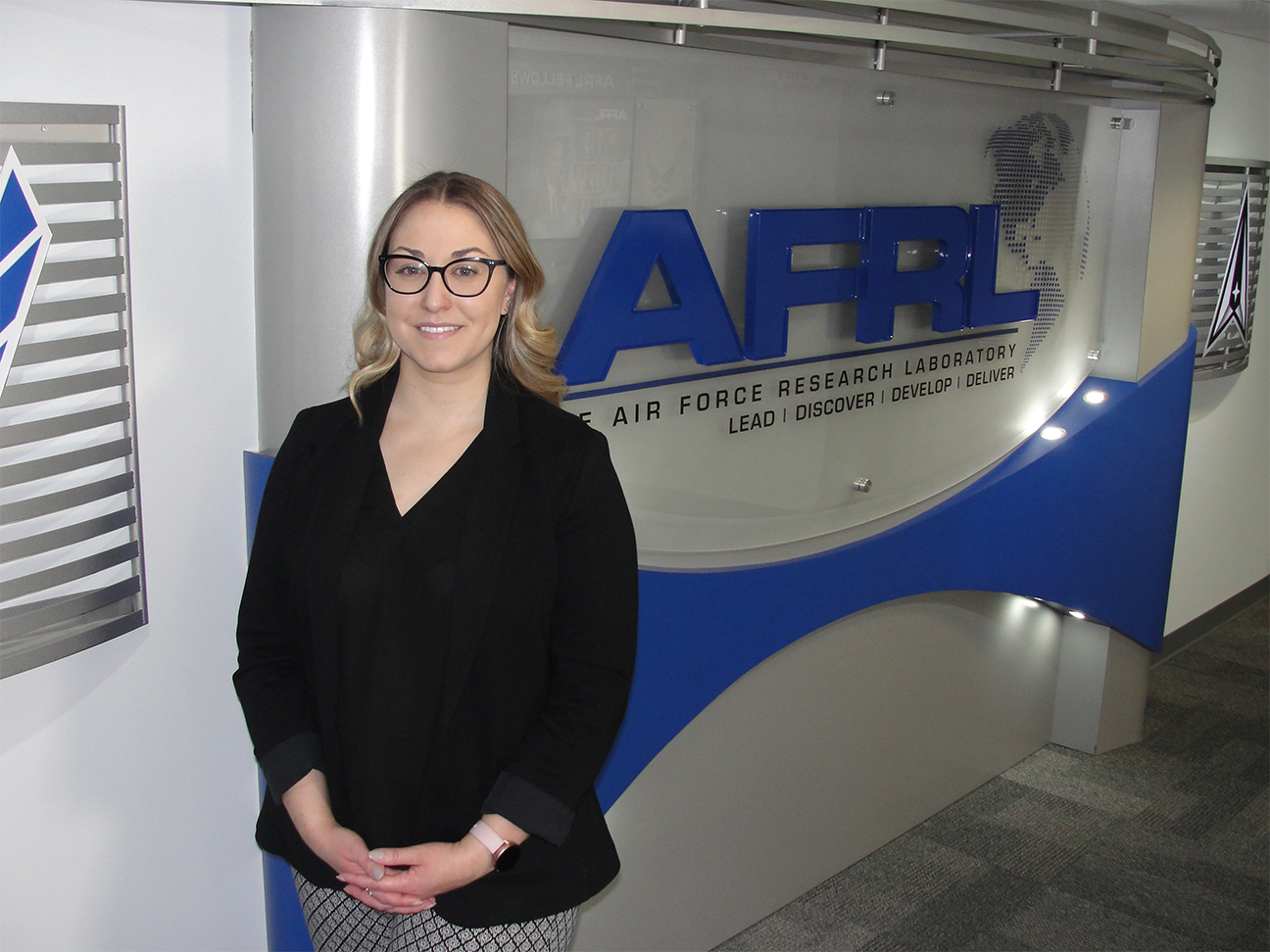 Dr. Michelle Brannum started as an intern in the Air Force Research Laboratory Materials and Manufacturing Directorate. Now, she leads the AFRL Commander’s Action Group, ensuring the commander and senior leaders have everything they need to support the multi-billion-dollar enterprise. (U.S. Air Force photo/Patrick Foose)