WRIGHT-PATTERSON AIR FORCE BASE, Ohio – Acoustics researchers in the Air Force Research Laboratory’s 711th Human Performance Wing are collecting and delivering acoustics data from hardened aircraft shelters around the world—data that customers can then use to certify that F-35 fast-jet airframes and the personnel working inside are safe.

Hardened aircraft shelters are reinforced hangars that store and protect military fighter aircraft. Many of these shelters are in Europe and date back to the Cold War. The earlier shelters were three to six feet thick, but during World War II, stronger, thicker shelters were built to protect German U-boats, explained John Stillion in his article Fighting Under Missile Attack.

These shelters today, with their differences in wall thickness as well as their diverse shapes and sizes, still provide a hiding place for fighter aircraft. They still provide protection for personnel inside to perform necessary maintenance. But the next-gen fighters like the F-35 have very different sound profiles. This creates the need for acoustics testing to ensure safety of the aircraft and crew.

“These hardened aircraft shelters, or HAS, are very common in Europe,” explained Dr. Alan Wall, a physical acoustics researcher with the 711HPW. “Before crews can perform any engine run-ups, maintenance operations or load weapons—before the F-35 can taxi out and take off, there is a need to certify that the personnel working on or around that aircraft inside these shelters are provided the recommended hearing protection. Also, crews have to ensure that the sound vibrations inside the shelter that are bouncing all around are not going to damage the aircraft itself.”

The team’s first foray into this work came from a request back in 2016 from the Royal Netherlands Air Force. The 711HPW acoustics team, led by Wall and now-retired Rich McKinley, traveled to the allied country to help. After about a week of gathering data and a year of analysis, the team delivered its final report, and the country completed its HAS certifications.

But that work attracted attention. Other countries, including the U.S., are reaching out to AFRL for help with additional acoustics testing and analyses of HAS for their certifications for next-gen fighters.

“The requests are coming from high-level leadership, who need their F-35s to be able to operate when they arrive at these various air bases, so they are asking for our help.”

Wall went on to explain that there are a number of stakeholders involved in the process of collecting the necessary data that will then be used for certification. While Wall’s team gathered acoustics data, other international partners gathered air quality and other data.

“There are structural engineers, who need our data to make decisions about if the F-35 is safe to fly after it’s been worked on in a hardened aircraft shelter. There are safety and occupational health experts, who need this data to determine if personnel working inside the shelters have proper hearing protection and safe breathing air. There are base operations specialists, who need to be able to execute missions inside these shelters. They let us know what they plan to do inside, and that tells us what to measure.”

Also, similar to sound inside different stadiums or playhouses, there are many variables, including wall thickness mentioned earlier, that come in to play with the sounds inside these shelters.

“From one shelter to the next, the noise levels can vary,” explained Wall. “This has to do with the geometry of the shelter; the composition of the walls, ceiling, floors; and perhaps the most critical—the interaction with the jet itself to what’s called the jet-blast deflector, a concrete structure at the back of the shelter that takes the flow off the jet engine and diverts it away from the shelter.”

And to complicate matters, not only is every shelter different, but there are no guidelines, no manuals.

“There’s no standard—no set way of doing this,” said Wall. “Now we have experience gathering this for the Netherlands, and we worked with the Navy in their enclosed shelters called hush houses—so we’re working to leverage that experience as we receive additional requests for data.”

So how exactly are these measurements recorded?

“We go to the site, bring an F-35 with us to park inside the shelter, and we cover the aircraft with microphones,” Wall said. “These microphones are acoustics sensors directly on the panels, or skin, of the aircraft. They could be in 30 different locations – wherever the structural experts tell us that the acoustic pressures can’t exceed a certain level. Then the aircraft is run up from low engine powers, and the acoustic data is recorded in real time—evaluated on the spot.”

Wall went on to explain that this real-time evaluation is a team effort where they predict the acoustics levels in stages of engine run-up.

“We all work together and ask ‘okay, so do we think the next point is going to exceed those criteria’—and if not, we keep increasing the engine power at various increments until we predict we’re going to exceed it. The structural folks, who tell us the criteria, are the authority though, and make those decisions—if the levels are going to be safe for the aircraft or not.”

“In the end, we take all that data that we gathered from the microphones, clean it up and do the statistics, and turn it into a full report. The customer can then use this official document for their certification processes. The F-35 structural experts sign off on it. Whoever the aircraft owner is – so in the Netherlands, the Royal Air Force in our first data collection – they sign off on it. Once the report is signed, the customer has to go through a follow-on process to certify aircraft for operational use in that shelter.”

“So essentially, we measure and provide all the data to the requesting organization or country, and then they take that information and go make decisions—‘Yes, we can do these things inside the shelter, or no, these things we can not do.’ And those answers are going to be different for each type of shelter,” Wall said.

Wall explained that his team is working towards a solution to these differing shelters and their wide array of sound profiles. Not only is the work for each request time consuming, it requires a great deal of manpower. It’s also expensive. While the team gathers data for their customers, they are also collecting data that they can leverage for a future modeling and simulation effort in hopes that in a few years, they won’t have to travel to and measure every shelter.

“Our goal is to be able to predict the answers based off information about the HAS that can be sent to us, which equates to a large long-term cost saver for the Department of Defense and each Partner and Foreign Military Sales country receiving the F-35.”

So not only is this AFRL team keeping F-35s and their pilots safe from sound, they are also developing the measurement standards so they can deliver HAS acoustics data smarter, cheaper and faster for future customers. 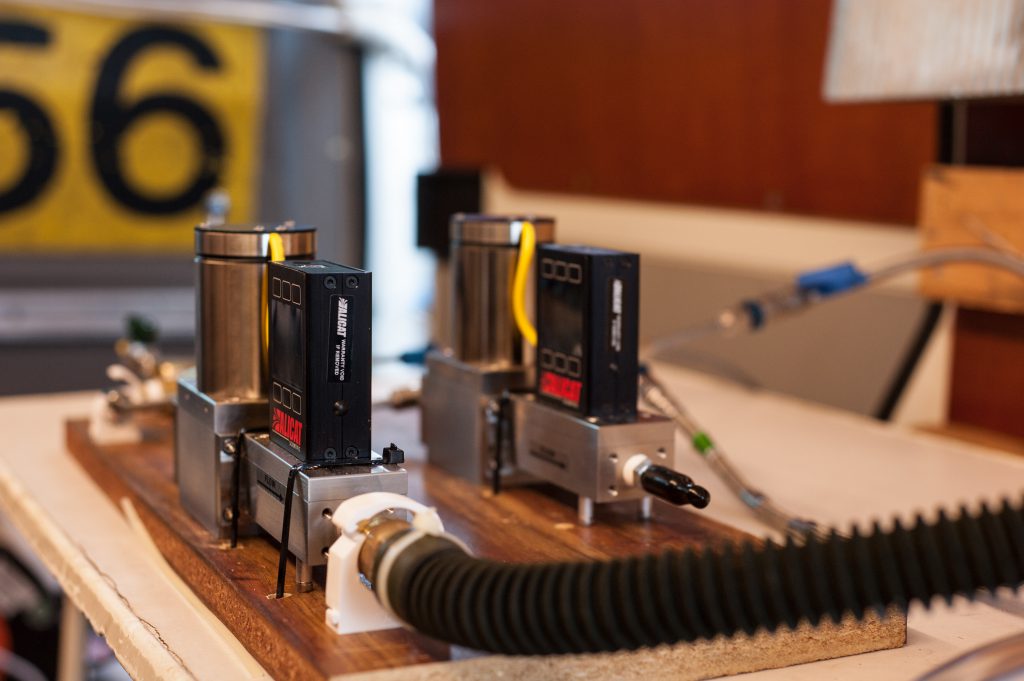 A pilot breathing air measurement system gathers samples in the Netherlands during an acoustics and air quality testing session, led by experts in the Air Force Research Laboratory’s 711th Human Performance Wing in an international effort to provide an official report to our international customer for its hardened aircraft shelter certifications. (Photo courtesy of Royal Netherlands Air Force) 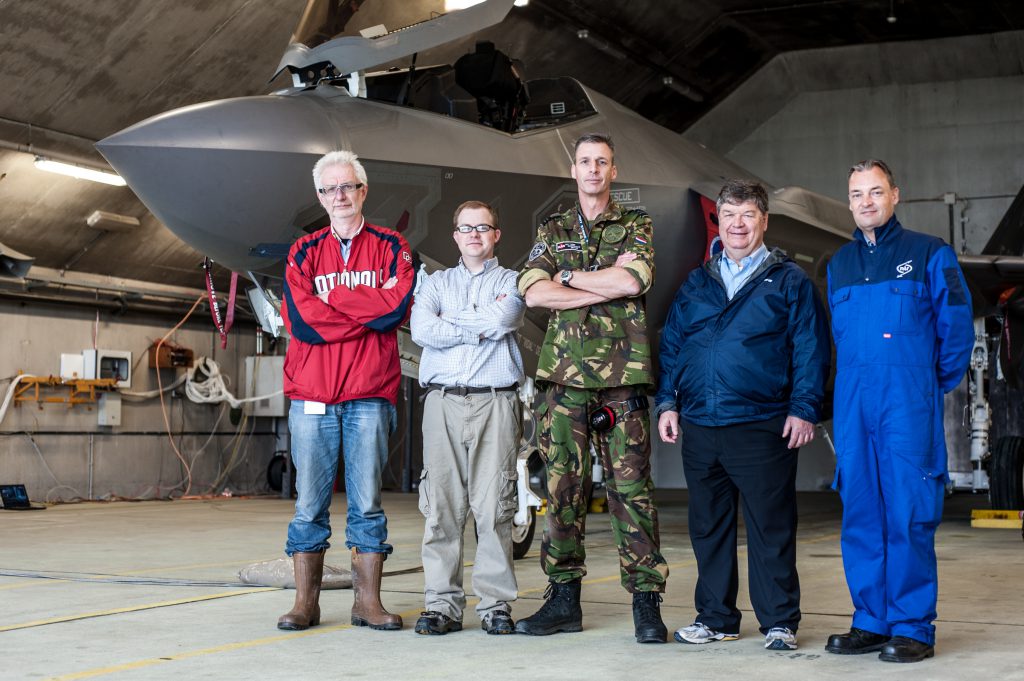