WRIGHT-PATTERSON AIR FORCE BASE, Ohio (AFRL) — Imagine a kitchen without a countertop or a garage without a space for its tools and nothing but the floor as a workspace. This is how Ground Surgical Teams (GST) have worked for years, but engineers from the 711th Human Performance Wing, part of the Air Force Research Laboratory (AFRL), are addressing this issue. Two 711HPW teams created a prototype of a more efficient workstation for clinicians to use in austere environments to significantly improve patient care.

Accordingly, anything the GST needs for stabilizing patients has to be brought with them, meaning these teams sometimes work with little to no resources, such as tables, hooks and other common equipment in austere environments.

While deployed to such an environment, Maj. Thomas Heering, 711HPW austere anesthesia cadre for the GST, had an idea that later became a tangible product: a tactical anesthesia workstation (TAW).

“This idea originated around when I was deployed in 2019-2020 to an austere surgical environment and we were taking care of trauma victims,” Heering said. “There was no way of organizing all of our equipment like the ventilator, suction and IVs in an efficient and safe manner. We were tripping over a lot of the things that we were trying to manipulate in order to care for the patient.”

Heering returned from his deployment and was stationed at the U.S. Air Force School of Aerospace Medicine (USAFSAM), one of two mission units in the 711HPW, where he began training anesthesia providers. When he noticed the same issues in the training environment, he realized the need to improve patient care.

“So I entered an idea to the Air Force Materiel Command’s Spark Tank competition,” he said.

The idea was recognized in the top five, and the semifinalists presented their ideas to a panel of leaders during the AFMC Senior Leader Conference in October 2021. While TAW was not chosen, senior leadership directed it through AFRL for engineering support where it flowed down to the rapid prototyping cell (RPC), which is part of the product development branch within the 711HPW’s Airman Biosciences Division.

“It made me really think, as a clinician, what sort of movements do I make, what sort of things do I need to achieve before inducing a patient with anesthesia before a procedure?” he said.

“What am I doing to hurt myself or potentially hurt the patient by taking my eyes off the table by bending down to adjust settings or look at medications?” Heering said. “Now I have a whole workspace. What does that do to improve my efficiency in drawing up the proper medications and having them readily available for the patient? These guys helped me realize by offering their engineering brain to my clinician brain.”

The team of engineers included three RPC engineers from the 711HPW: 2nd Lt. Stevan Gallegos, special warfare mechanical engineer; 1st Lt. Hannah Lyness, special warfare mechanical engineer; and Peter Voland, a Ball Aerospace contractor, as well as Nathan Stover, the RPC tech lead. This collaboration between the GST cadre at USAFSAM and the RPC team rapidly produced three prototypes in one month and inserted them into the GST’s phase one training course at USAFSAM.

Heering’s work with the RPC team resulted in a prototype that exceeded the original request and met the goal of lifting everything off the ground to provide an efficient workstation.

The team incorporated unique ideas and techniques to make this rapid prototype.

“We used a lot of commercial off-the-shelf equipment (such as) tripods or other quick deploy mechanisms as the backbone for this structure,” Voland said noting his team employed “laser cutting as well as 3D printing, band saws and other common shop fabrication.”

While brainstorming, the team developed ideas for collapsible equipment and quick deployment, among other considerations.

“Some of the big capabilities of the TAW is all the medical equipment, either in the emergency room or operating room, is to elevate it to a viewable level instead of on the ground where they have to bend over and view the screens,” Gallegos said.

All three prototypes break down for travel and have extra table space, including areas to insert hooks, blood and IV bags, and places for all monitors. The TAW was created as a prepopulated unit allowing the providers to travel with the screens attached for easier set up.

While all three designs incorporate many unique features, one was the clear winner and was recommended to the GST pilot group for further consideration, Burnett said noting that it “encapsulates the ease of use, the set up and the view-ability and utility of the equipment necessary during the ‘off the ground’ presentation of the equipment.”

Each prototype continues to undergo testing from stand up to break down, and information is gathered throughout the GST training courses, which began in January.

After introducing the prototype to the GST training course, the students quickly learned its value in mimicking a hospital room and mitigating safety factors that arise when working on the floor with equipment in field-type spaces.

“If providers were to break something because someone trips over it, you are essentially putting the survivability of that casualty at risk,” Burnett said “So, getting the (equipment) off the ground … is key.”

The TAW goes along with the existing process with the additional feature of lifting many of the necessary pieces of equipment off the ground.

In the GST training course, the cadre viewed the effects of adding one and two TAWs to the simulation.

“We saw the efficiency improve both on the operating room side as well as the triage side,” Heering said.

The prototype mimics the look of a U.S. operating room.

“When I bring a patient into a modern operating suite, I have everything I need in one space called the workstation or the anesthesia workstation so all of my monitors, anesthesia machine, volatile agents and medications … everything is there,” Heering said.

Heering said he was impressed by and proud of the RPC team’s ability to create such quality work in such a short time, allowing the prototype to be tested for the last few months.

“The feedback has been overwhelmingly positive immediately,” Heering said. “Some comments included, ‘I wouldn’t want to deploy without this’ and ‘this really enhanced my care for the patient.’”

“It takes away the need for two people to actually do my job so if I am looking for someone to hand me things, I don’t need that extra person if I have a table to set things on,” said Faltersack. “I can quickly glance over at the monitor that’s right there and the IV pump that’s right there, I don’t have to worry about things falling over, so it’s a huge step up.”

The RPC team collectively agreed that creating this prototype and receiving the feedback has been gratifying.

“It’s definitely rewarding to be able to have an impact in something as important as casualty or patient care … I love that we could make an impact by helping advance an idea,” Voland said.

While the prototype is not yet a fully manufactured device, the team appreciated being part of the creation.

“We are just helping bring this concept one step closer to that stage,” Voland added. 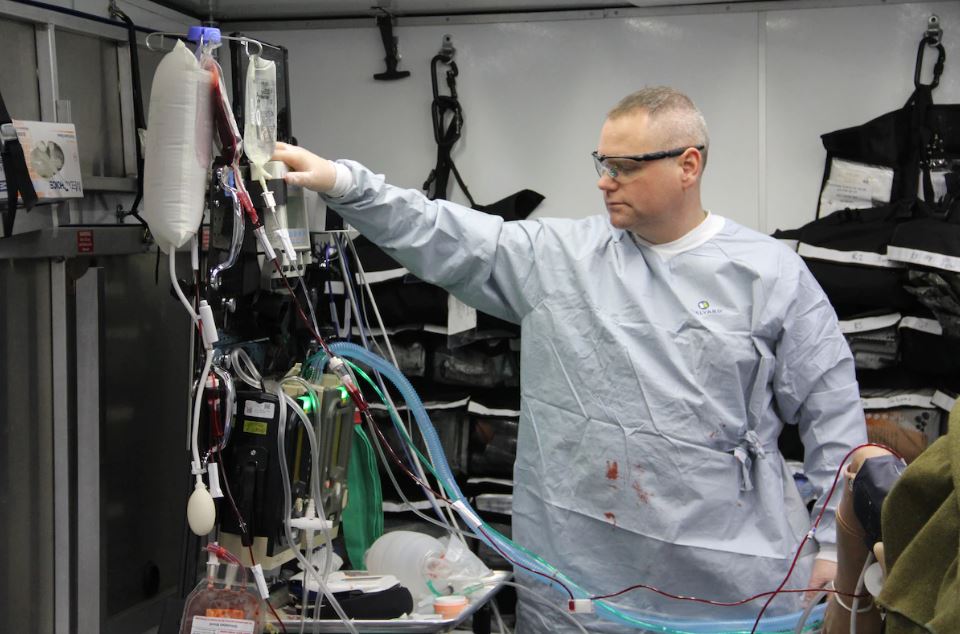 Maj. Adam Faltersack, an anesthesia element chief, 81st Surgical Operations Squadron, Keesler Air Force Base, Mississippi, uses prototype A of the tactical anesthesia workstation, or TAW, April 8, 2022, during a Ground Surgical Team, or GST, training course at U.S. Air Force School of Aerospace Medicine at Wright-Patterson Air Force Base, Ohio. Maj. Thomas Heering, an austere anesthesia cadre for the GST, 711th Human Performance Wing, Air Force Research Laboratory, submitted the TAW idea to Spark Tank in 2021, and the idea moved forward with a team of engineers in the rapid prototyping cell, or RPC. The RPC team developed the three prototypes for testing beginning in January 2022, and have since narrowed it down to one winning prototype. The team will push the recommended prototype to the GST pilot group for further deliberation. (U.S. Air Force photo/Aleah Castrjon) 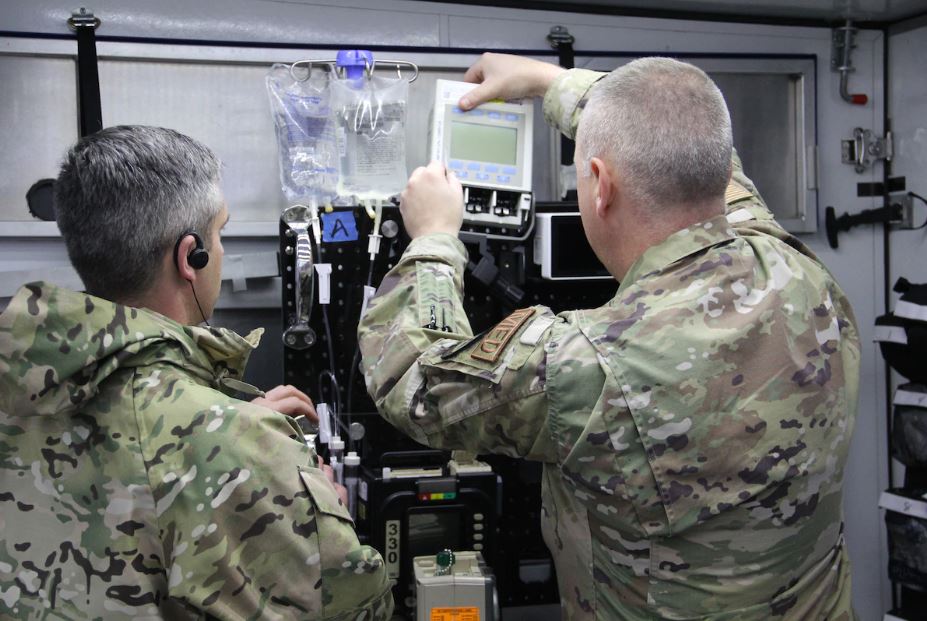 Maj. Thomas Heering, left, an austere anesthesia cadre for the GST, 711th Human Performance Wing, Air Force Research Laboratory, helps Maj. Adam Faltersack, an anesthesia element chief, 81st Surgical Operations Squadron, Keesler Air Force Base, Mississippi, set up prototype A of the tactical anesthesia workstation (TAW), for the first time April 8, 2022, during a Ground Surgical Team (GST), training course at U.S. Air Force School of Aerospace Medicine at Wright-Patterson Air Force Base, Ohio. Heering submitted the TAW idea to Spark Tank in 2021, and the idea moved forward with a team of engineers in the rapid prototyping cell (RPC). The RPC team developed the three prototypes for testing beginning in January 2022, and have since narrowed it down to one winning prototype. The team with push the recommended prototype to the GST pilot group for further deliberation. (U.S. Air Force photo/Aleah Castrejon) 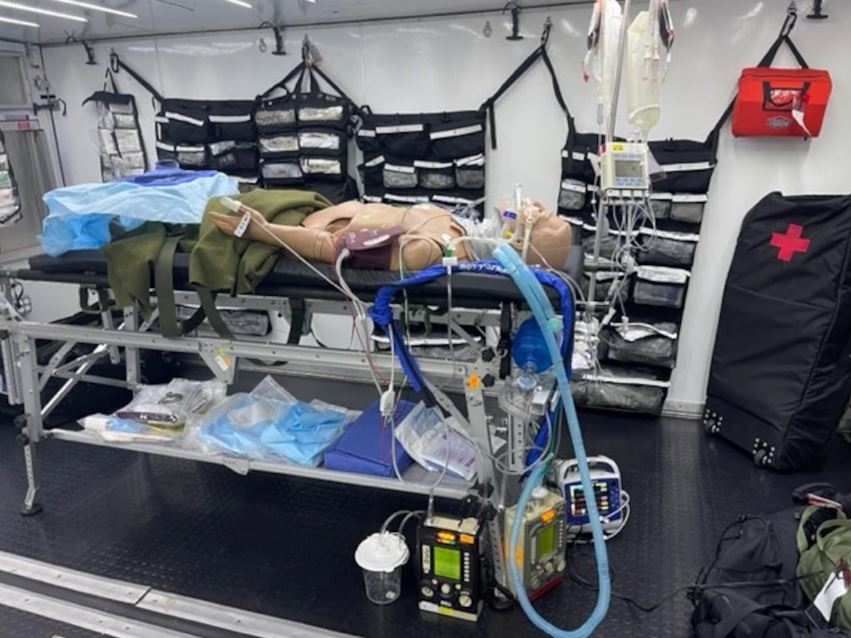 A field-type operating room depicts what it is like to work on a Ground Surgical Team (GST), with the manikin up off the ground and the GST’s equipment on the ground. In an effort to make the field environment more efficient for providers, Maj. Thomas Heering, an austere anesthesia cadre for the GST, 711th Human Performance Wing, Air Force Research Laboratory, submitted the tactical anesthesia workstation (TAW), idea to Spark Tank in 2021, and the idea moved forward with a team of engineers in the rapid prototyping cell (RPC). The RPC team developed the three prototypes for testing beginning in January 2022, and have since narrowed it down to one overall TAW winner. The team with push the recommended winner to the GST pilot group for further deliberation. (U.S. Air Force photo/Maj. Thomas Heering)