WRIGHT-PATTERSON AIR FORCE BASE, Ohio – About 70 student researchers at the Air Force Research Laboratory’s Materials and Manufacturing Directorate displayed their research objectives, efforts and learning experiences at the directorate’s summer student researcher poster session Aug. 1 in the auditorium of Building 653.

The students, ranging from high school to Ph.D. candidates, worked within AFRL for three months to gain exposure in conducting research for the Air Force. At the poster session, students presented a technical poster detailing their scientific findings to peers, AFRL leadership, visiting summer faculty from universities, and potential employers. The event provided an opportunity to engage with subject matter experts and other students looking to build their professional portfolios.

“We are entering into a different phase of great power competition,” said Maj. Gen. William T. Cooley, commander of AFRL, as he welcomed the students to the event. “Fundamentally, it’s going to be about technology. This is really a long game and it is about the long-term technology and maintaining that technological advantage that will help maintain world order. I oftentimes think back to pre-World War I, back to 1914. Most everybody before that event happened thought, ‘Oh, we’re never going to get into a major conflict,’ and yet we did. We certainly want to avoid that, and the way to avoid that is through deterrence. The conventional deterrence that comes with having a clear technological advantage. What you all are doing ties directly into that strategic objective for the United States.”

After providing welcoming comments, Cooley then spent time visiting with many of the student researchers while learning what their work was concentrated on this summer.

One of those young, bright minds was Jason Dong, who will be a sophomore at Duke University this fall and was completing his third year working at AFRL through the research program and his first year working under Doug Carter of the Materials Affordability Team.

“I had a very immersive summer helping with a couple projects in the lab and doing some research,” said Dong. “Most of my lab work was with the Tape Bubble Study, where we analyzed the formation of air bubbles forming over gap filler and tape on certain military aircraft.”

In the field, once aircraft reach certain levels of altitude, air either forms or becomes entrapped under the tape and upon landing, maintainers have to manually slit the tape to release air or strip the aircraft and reapply tape, Dong said.

“This is costly in terms of man hours and money for the Air Force. The team built a custom chamber that operators can adjust temperatures and pressures in to simulate changes in altitude, and I was able to test panels very similar to what you would find on an aircraft within the chamber to try to recreate what the maintainers see in the field.”

Dong said he also had the chance to do research in preparation for a project he hopes to start next summer for an automated detection system for categorizing damage on an aircraft and that he hopes he can work with AFRL to do more development with machine learning and artificial intelligence to be able to have an algorithm detect damage.

Elise Kemper, who graduated from Bellbrook High School this year, will be attending Ohio State University this fall, studying mechanical engineering. She worked this summer at AFRL’s Composite Materials & Processing section within the Composites Branch of the Structural Materials Division with Thao Gibson, Kaitlin Rigitano and Andrew Abbott. Her research area was Polymeric Matrix Composites where she worked with a fellow Wright Scholar student, Johnathon Albrecht, to quantify the void content of areas of PMC samples to relate back to qualitative density data given by ultrasonic C-scans. This was done to create a dataset of numeric values for comparison to other samples in the future.

“This has been a really great experience,” Kemper said. “At my high school we didn’t have a lot of engineering exposure so this has been a great immersion into what field research is like, as well as interacting with different groups and all sorts of disciplines in engineering,” she said.

With the energy being displayed by the students while they were presenting their research posters, AFRL leadership could easily see that the next generation of scientists and engineers is ready to get to work.

“We get students from all over the country with fresh ideas anxious to gain real world experience working alongside top-notch scientists and engineers,” said student program manager, Asheley Blackford.

These experiences may also encourage students to apply for a full-time position with AFRL once they finish their academic programs. Students come to AFRL from local corporations, high schools and universities nationwide. Events such as the poster session emphasize the collaborative spirit between AFRL, industry partners and academia, which ensures that Air Force science and technology connects with various avenues and remains cutting-edge.

Students typically work full-time during the months of May through September, depending on their schedules. Applicants must be at least 16 years old and enrolled in high school, a technical school or other qualifying educational institution. 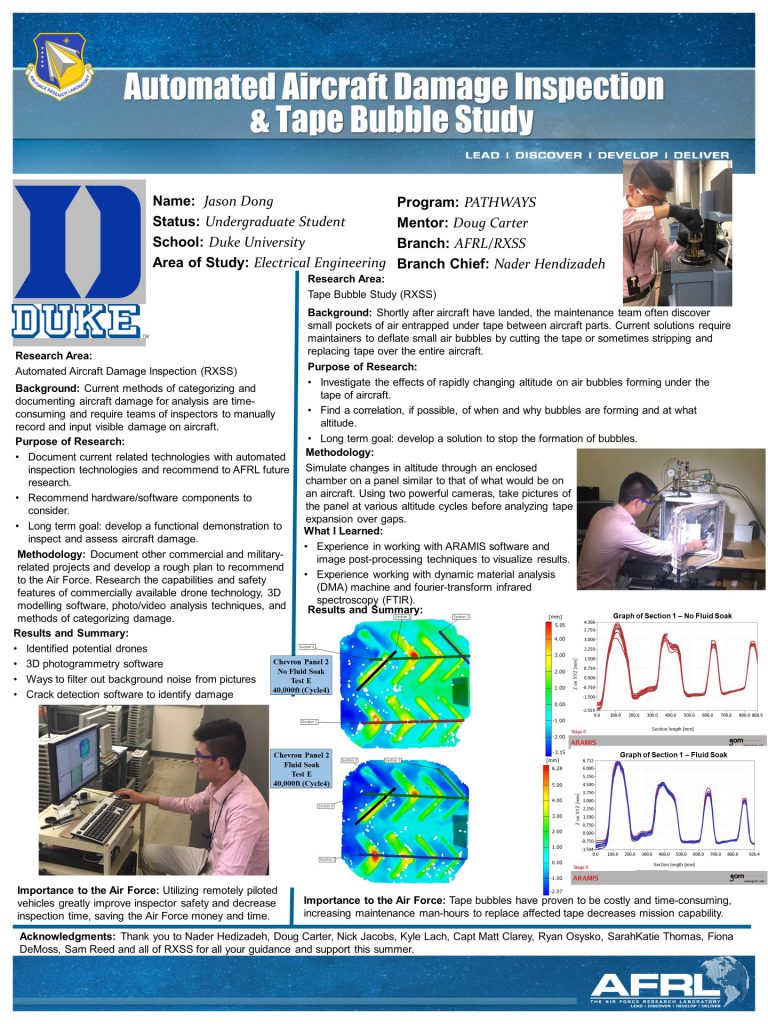 Jason Dong, who will be a sophomore at Duke University this fall and is completing his third year working at AFRL through the student research program and his first year working with AFRL’s Materials Affordability Team. His poster centered around his research on automated aircraft damage inspection and the Tape Bubble Study he participated in this summer. (U.S. Air Force graphic/Jason Dong)