WRIGHT-PATTERSON AIR FORCE BASE, Ohio (AFRL) – On February 18, 2021, NASA’s rover Perseverance touched down on the surface of Mars to begin searching for evidence of past life. The success of this touchdown would not have been possible without the work of a team of researchers who operate unique erosion testing equipment in a windowless bunker at Wright-Patterson’s Air Force Research Lab. And this is not the only Dayton connection to this particular Mars mission.

Perseverance was lowered to the Martian surface using a “sky crane.” As rovers became more sophisticated, carrying more scientific instrumentation, cameras and tools, they also got heavier. As they got heavier, getting them to land safely became more of a challenge. Previous methods, for example an airbag cocoon, that were used on smaller rovers such as Spirit and Opportunity just wouldn’t work on something as hefty as Perseverance or its 2012 predecessor, Curiosity.

So, going back to the drawing board, NASA came up with Skycrane, a system that works something like a heavy-lift helicopter, or an aerial crane, used in industry. In the thin atmosphere of Mars, however, something other than helicopter blades would have to provide the needed lift. The answer was rockets.

The rockets come into play during the last few moments of descent, after the heat shield and then a parachute have slowed the spacecraft’s speed from about 12,100 mph — when it hits the top of the atmosphere — to about 190 mph when it is 6,900 feet above the Martian surface. At that point, eight rockets begin firing to slow the craft to 1.7 mph for touchdown — a walking speed. The rockets do this by firing toward the Martian surface, precariously balancing the craft in a manner similar to that of a remote control quadcopter. Those rockets, however, scour the ground, kicking up a rattling storm of debris made up of dust, sand, and rocks — a possibly lethal-to-the-mission swarm of fast-moving projectiles that could bash the surface of the craft into bumps and ribbons of metal.

To prevent that kind of damage, NASA’s Jet Propulsion Lab had to formulate a protective coating for the craft that would withstand such a barrage. Once formulated, such a coating would need to be tested. That’s where AFRL’s Materials and Manufacturing comes into the story.

JPL knew from past experience that AFRL had the best available equipment for replicating potential damage caused by the debris blasted by the rockets toward the landing craft. The erosion rig had already been used to test the durability of the coatings on the Mars Science Laboratory (MSL) in 2008 and the aforementioned Curiosity Rover in 2011. The experts at NASA knew where to go.

“We are a unique one-of-a-kind facility,” said Dr. Matthew Hartshorne, Erosion Area Lead Engineer. “No other lab in the world conducts continuous, calibrated sand erosion at these velocities.” He further explained that the test particles in the testing rig move really fast, at around 500 mph.

“We are also working on a design to increase our capability to supersonic speeds,” he continued, “which will benefit NASA, along with the Department of Defense community, but that is several years away.

“Our bread and butter is testing aircraft coatings,” said Hartshorne. “We have a number of different test rigs where we test both rain and sand erosion.”

According to Hartshorne, the rig’s initial purpose dates back to the Cold War. “The rig was designed for testing flight through debris kicked up by nuclear weapons. But that basic rig has been rebuilt a few times. It got really heavily instrumented back in 2005 or so.”

For the test on Perseverance’s protective coating, NASA provided the necessary data on particle sizes for the test debris. “They sent us a request to test everything from very small dust-sized particles up to gravel. It was about a three order-of-magnitude size range.”

Hartshorne explained that they didn’t just mix all these different sized particles together and blast it at the test sample. They had to run a different test for each different size. The reason for the multiple tests is that “each size takes a different ballistic arc based on its mass and drag.”

NASA provided the parameters for the particle sizes, but often not the actual test “debris.” It was up to AFRL’s research team to find sources for that. In one case, for example, sand designed for US Golf Association (USGA) sand traps was used. “That turned out to be a very highly aggressive sand,” said Hartshorne. “It actually gave us a kind of worst-case scenario.”

The erosion lab also used a gravelometer to test larger sizes of debris. “For that one, NASA actually sent us their simulated Mars rocks.”

Hartshorne’s team assisted the JPL team with a multi-day testing event, including complete test set-up, testing and insights on possible failures. Without the testing at AFRL’s Materials and Manufacturing erosion lab, landing Perseverance safely would not be so assured.

So, what is the “other” Dayton connection to Perseverance’s mission?

From the Wright Brothers to Wright-Patterson Air Force Base, Ingenuity! 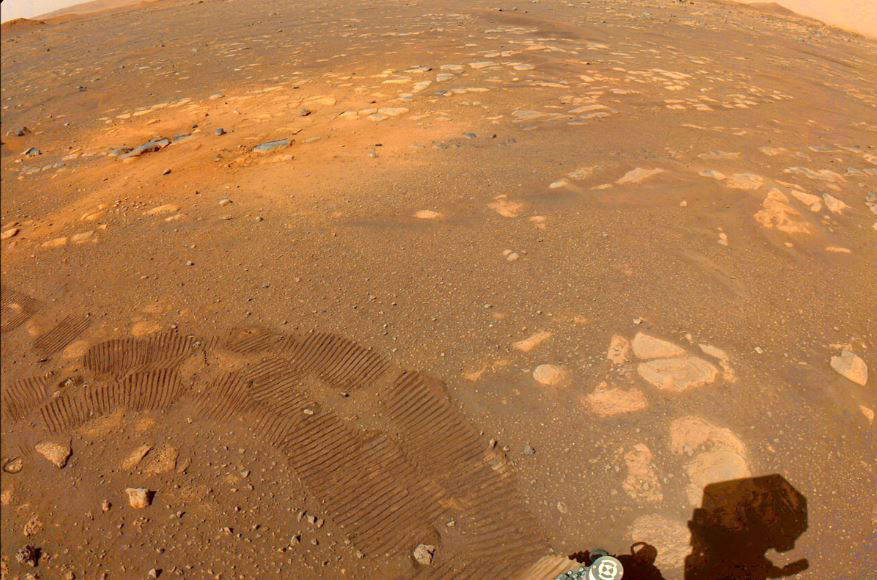 This image taken by NASA’s Mars 2020 Perseverance shows tracks from the rover’s first drive. It also shows an area that was scoured clean by the craft’s descent stage rockets — the lighter-colored area shown near the center-top. Testing done at AFRL’s Materials and Manufacturing ensured the landing craft’s protective coating would survive being blasted by that debris. (Photo courtesy of NASA)