Allvin commended the work being done in the 711 HPW during a luncheon with members of the junior force as well as a ceremony in which he awarded select top-performing 711 HPW personnel with his personal military coins.

“I’m excited to be here because it’s one of those keys to the future that doesn’t get a lot of press and headlines, but the types of things this organization is doing while everything else is trying to catch up to the national defense strategy in competition with adversaries—this is the stuff where we understand not only about the readiness of Airmen right now but building an understanding of how we work, what science is teaching us, and how we can leverage that to make sure we’re not only great when we’re doing the mission but great when we’re at home with our families, when we’re in, when we’re out, when we’re gone,” Allvin said. “[It makes us] better whole Airmen. That’s one of the best competitive advantages we can get. So, being able to come up here and spend some time, it reenergizes me.”

In the morning, USAFSAM leaders briefed Allvin on medical flight screening, aeromedical consultation efforts and the Air Force Operational Support Team Program. The OST program is the only data-driven and outcome-informed embedded medical effort in the Air Force today, and each team consists of musculoskeletal and mental health experts along with a program manager. All medics assigned to an embedded medical mission are brought to USAFSAM for one week to collaborate across specialties and learn skills critical to embedding with Airmen.

He was also shown USAFSAM’s “High Bay,” which includes multiple airplane fuselages that allow aeromedical personnel to train for aeromedical evacuation in as close to “real world scenarios” without taking flight. By perfecting on the ground, trainees are much better prepared for their follow-on training in the air.

After transitioning to the Airman Systems Directorate, Allvin, an avid cyclist, showed particular interest in a presentation about the Airman Data Analysis and Performance Tracking System developed in the Signature Tracking for Optimized Nutrition and Training lab. Presented by Drs. James Christensen and Adam Strang, ADAPTS ingests and aggregates data from human performance technologies, such as “wearables” like a FitBit or Garmin, and applies custom analytics and algorithms to create real-time visualizations with actionable information.

“Before wearables became the hype, we were in this space quite a bit,” said Dr. Rajesh Naik, chief scientist of the 711 HPW. “We were looking at biomarkers: what are the key attributes? Is it heartrate variability? Is it SpO2 levels? So, we’ve been doing a lot of foundational research going back almost 10 years. And we identified heart rate variability as one of the biomarkers of fatigue or stress that you could use reliably to monitor individuals. And then you have this explosion, due to confluence of AI and microelectronics with biosciences. It’s caused such a huge inflection in the development of wearable devices.”

With the tracking of data by ADAPTS, the STRONG Lab seeks to improve support to optimize Airman performance, reduce workload for servicemen and women and improve decision making for operators, commanders and support, Christensen explained.

The presentation sparked discussion of potential use of the system to detect Covid symptoms or other illness to encourage quarantine as well as continuously monitor Airmen’s fitness to prevent injury and long-term disability brought on by inadequate training for the mandated annual physical fitness test.

The Airman Systems Directorate partnered with the Defense Health Agency in an ongoing study about routine use of wearables on and off duty, what the potential is for mandatory use, especially in specific Air Force career fields, and the privacy and policy implications. Proof of concept testing as a Program of Record is currently taking place in the Air Force Special Operations Command with rollout to 20,000-25,000 users happening soon. The Airman Systems Directorate has already put 9,000 device sets in the hands of all the services, including the Air Force’s Air Education & Training Command and Air Combat Command.

Researchers in the 711 HPW also test wearables in the centrifuge, which Allvin next observed on the tour. The massive centrifuge device teaches aeromedical students about the effects of gravity forces on human physiology and gives USAF fast-jet aviators the capability to experience up to nine Gs, or nine times the normal force of gravity, in a controlled environment to measure a pilot’s ability to counteract the effects and prevent G-induced loss of consciousness. In addition, Allvin toured 711 HPW’s research altitude chambers.

“We’re able to look at the system as you would a weapons system, to track performance and provide information to keep people in the fight,” said presenter Dr. David Burch of the Airman Systems Directorate.

Allvin’s visit also included a stop at the Naval Medical Research Unit Dayton (NAMRU-Dayton), a neighbor and frequent partner of the 711 HPW. As a result of the 2005 Base Realignment and Closure (BRAC), the Naval Aerospace Medical Research Laboratory (NAMRL), previously located in Pensacola, Florida, was moved to WPAFB with the intention of developing and forming a center of excellence in aerospace medicine research for the Air Force and the Navy. In 2010, NAMRL and Navy’s Environmental Health Effects Laboratory (EHEL) merged and were established as one command, NAMRU-Dayton.

“NAMRU-Dayton is committed to performing operationally relevant and important research to promote the health and readiness of the warfighter, and we can accomplish that best by growing our partnership with the 711th,” said Navy Capt. Nimfa Teneza-Mora, Commanding Officer, NAMRU-Dayton.

While presenting NAMRU-Dayton’s facilities, Dr. Richard Arnold, director of NAMRL, discussed collaborative research into unexplained physiological episodes related to altitude, such as the F-22 issues. He discussed NAMRL’s effort in evaluating sensors for monitoring oxygen, CO2, and pressures that can be embedded in a flight mask allowing testing of many commercial-off-the-shelf sensors presented to the Air Force and Navy that failed to function in the challenging cockpit environment.

Leadership in NAMRU-Dayton also provided demonstration of its $19 million, 245,000-pound disorientation research device, nicknamed “The Kraken.” The 4,500-horsepower device allows researchers to create realistic simultaneous motion simulations using all six degrees of freedom and up to 3Gs of planetary motion with horizontal travel up to 16 ½ feet.

“The great thing about these devices — the centrifuge, the chambers, the Kraken — is not that they’re great big devices, it’s that they’re research devices. All of them are customizable, and they can do things beyond the limits of what we can conceive we need on the horizon. It’s a researcher’s dream, which brings talent to this ecosphere,” said Phillipson.

Allvin’s tour wrapped with discussion on biotechnology and Live, Virtual, and Constructive science & technology efforts at the 711 HPW.

“What the entire enterprise does is it moves things forward. It’s hugely valuable,” Allvin concluded. 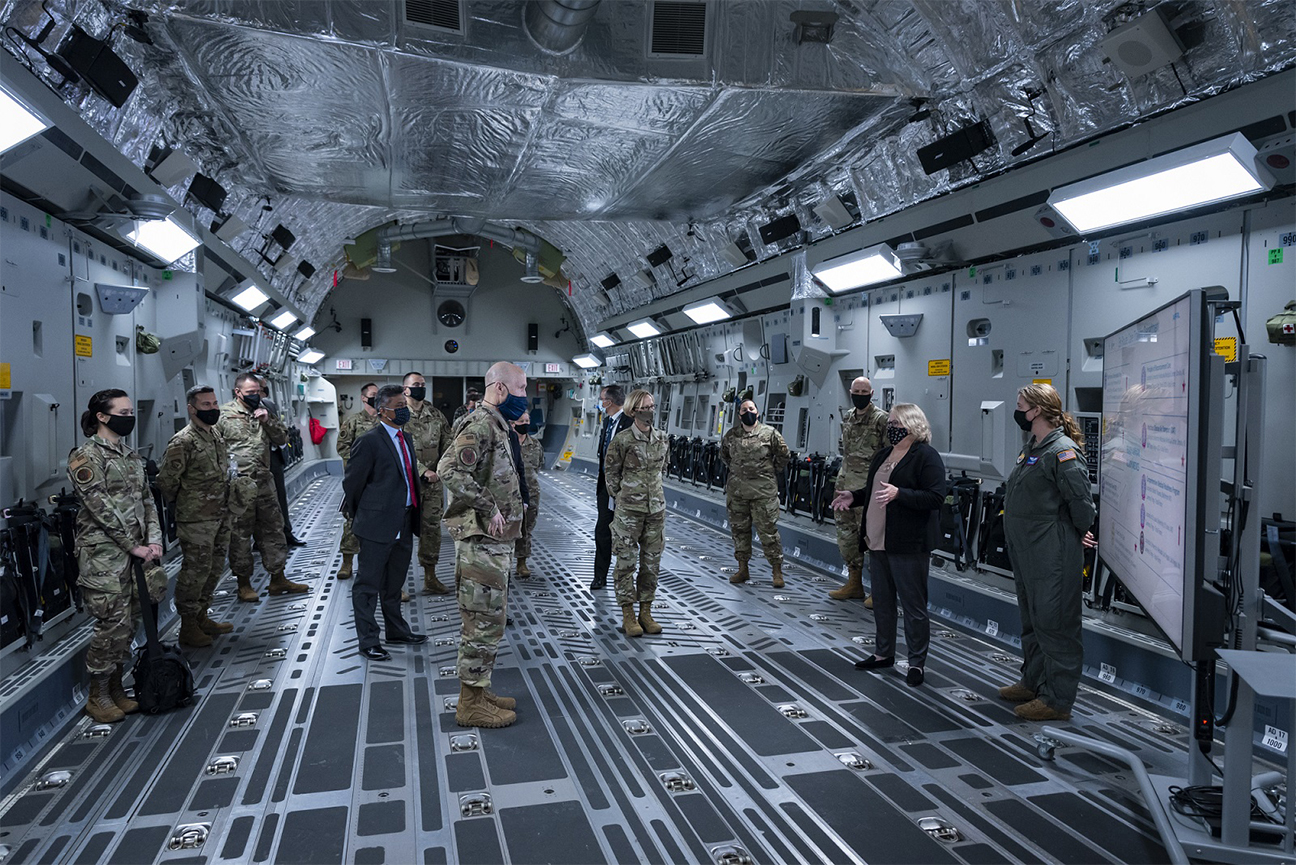 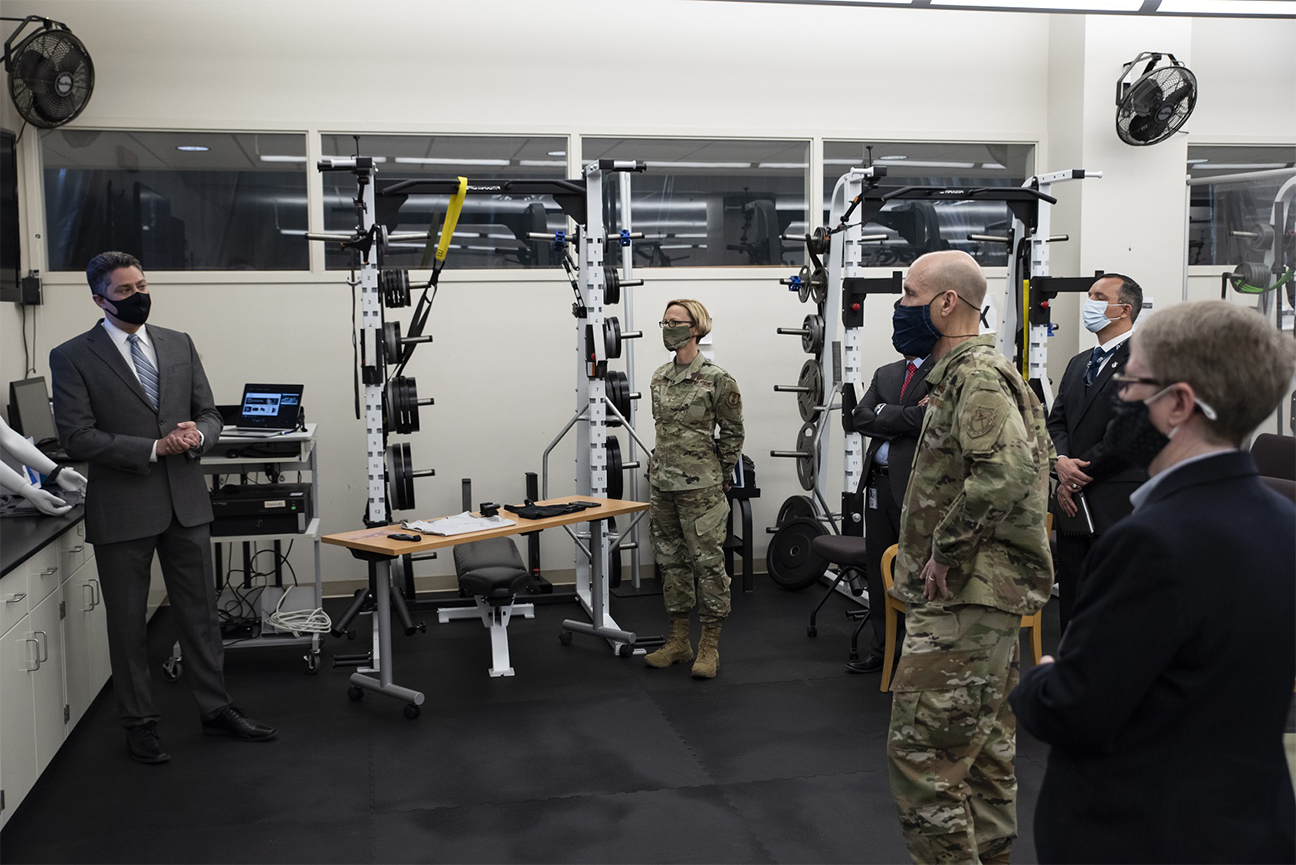 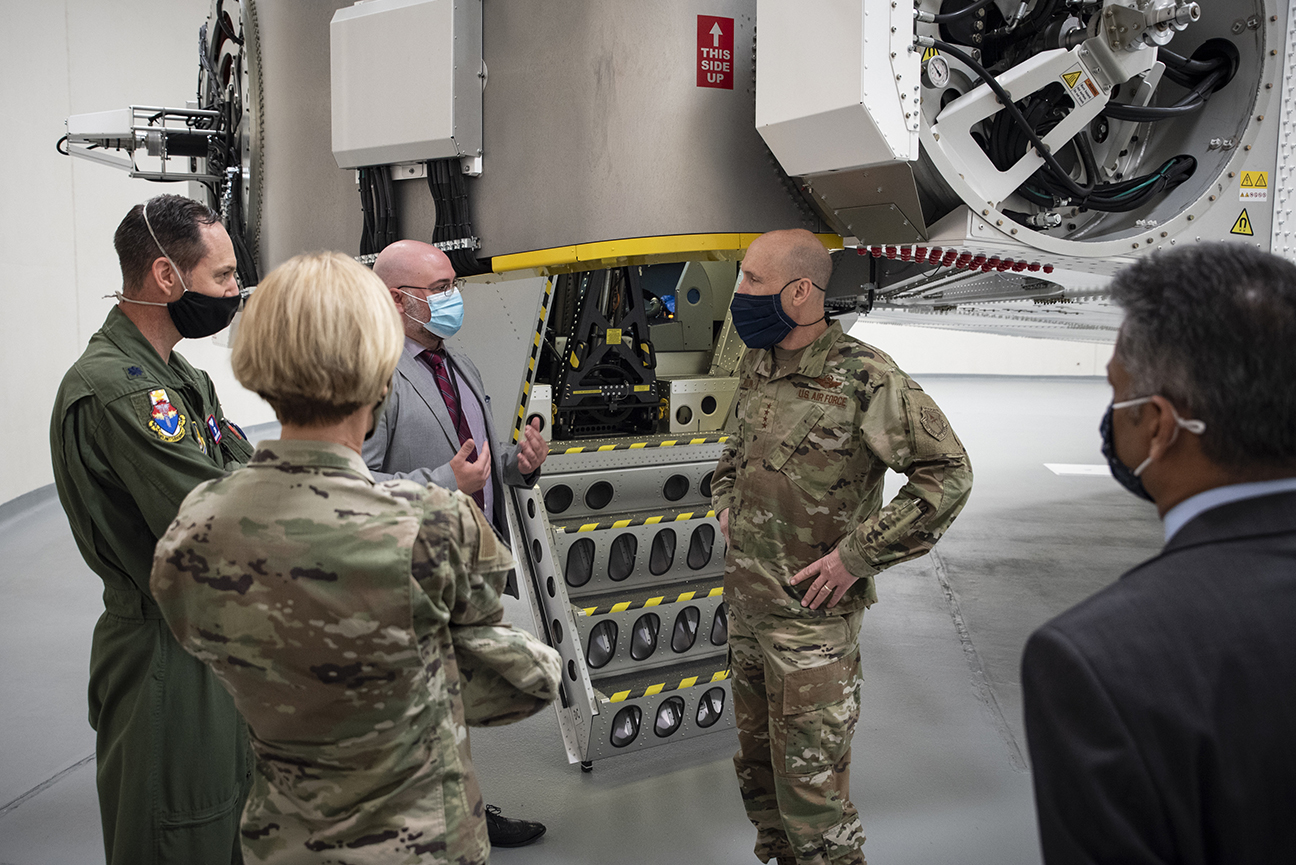 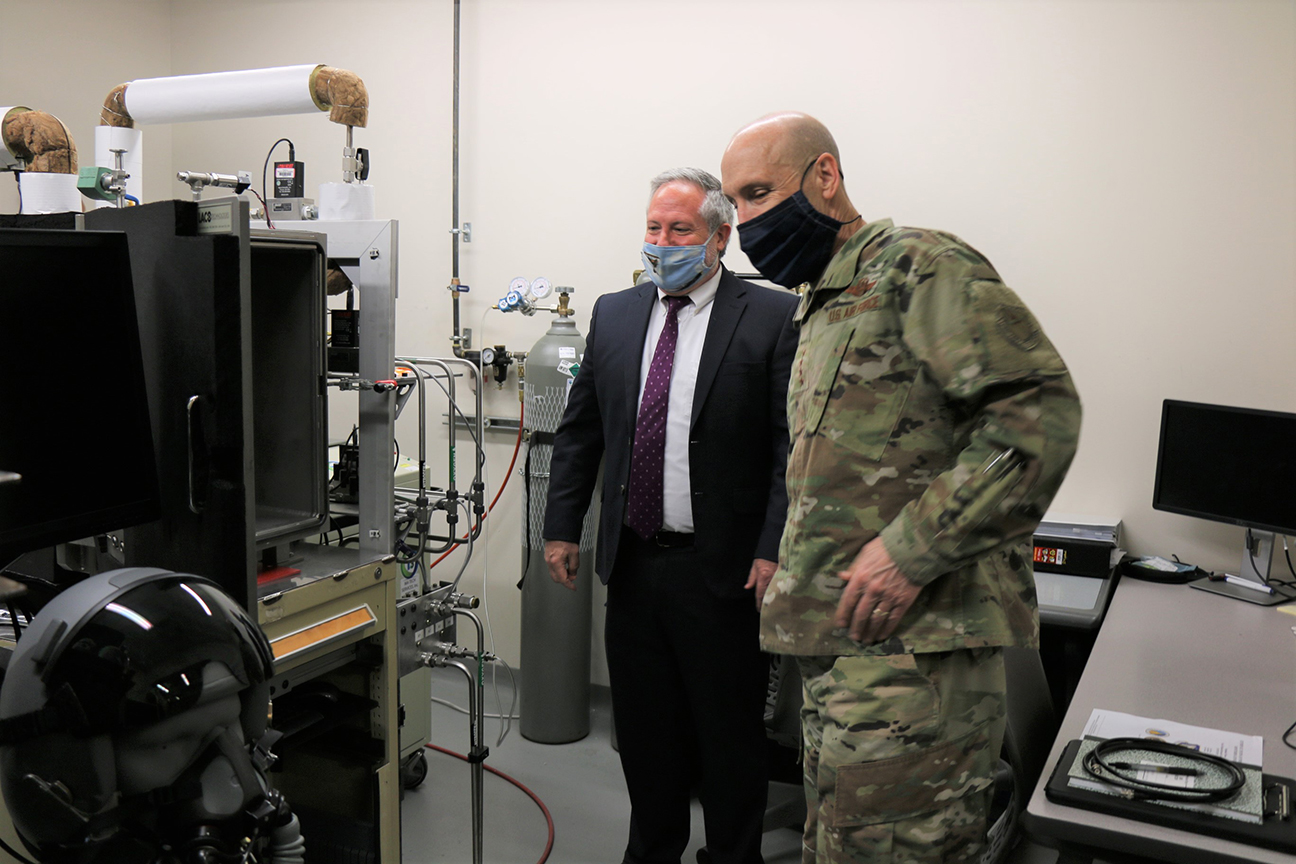 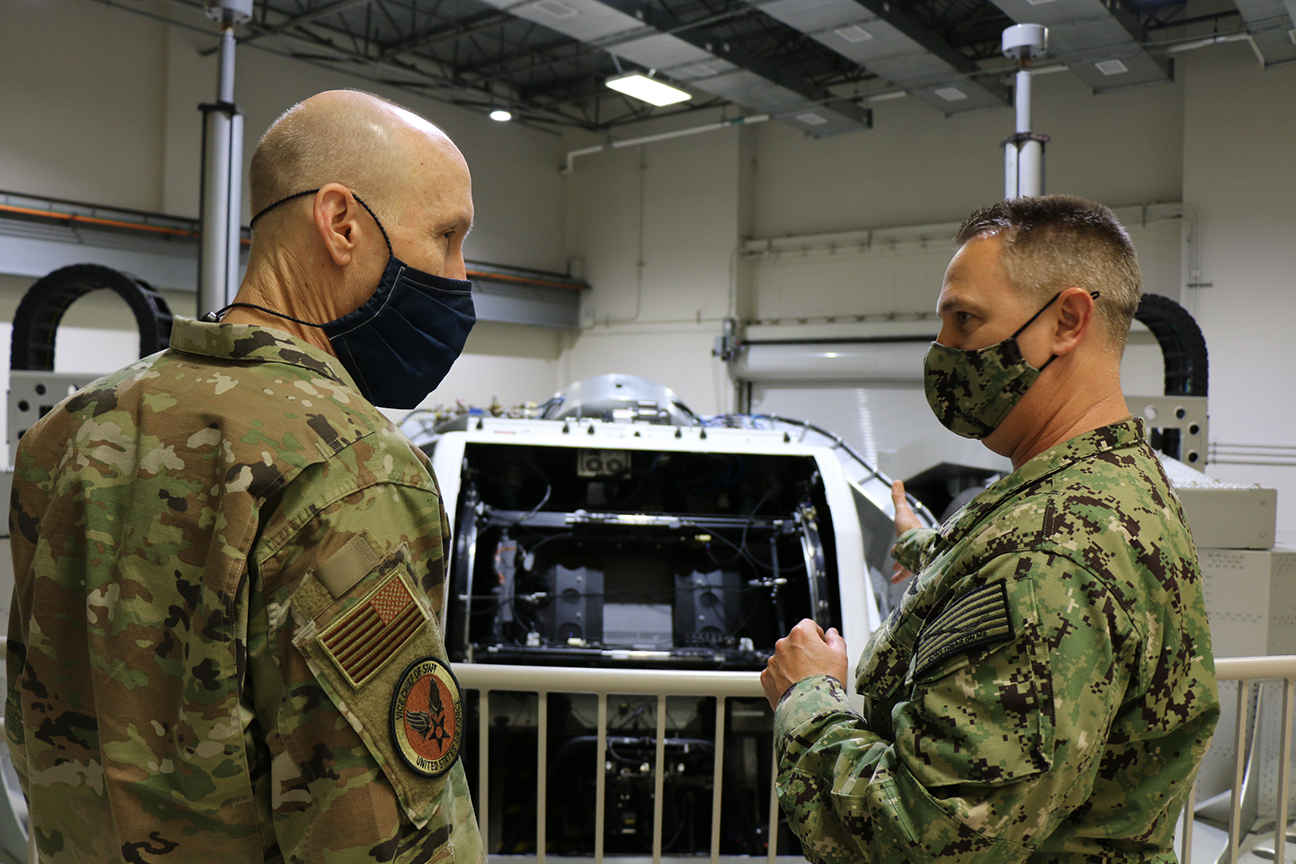 Navy Capt. Richard Folga, Department Head, Engineering and Technical Services and Program Manager of the Kraken, Naval Aerospace Medical Research Laboratory, NAMRU-Dayton and Gen. David Allvin stand on a balcony in front of the Disorientation Research Device, also known as the Kraken. The device is a one of a kind national scientific asset that provides a platform for basic science and applied research through simulation of aviation environments with customizable capsule configurations supporting one or two side by side occupants. (U.S. Navy photo/Megan Mudersbach)