The model you see has been sectioned to show the components that make up the engine: the injector, combustion chamber, and regeneratively cooled nozzle. Not shown are the turbopumps that bring in the fuel and oxidizer to the injector face.

The Atlas was the nation’s first Intercontinental Ballistic Missile (ICBM). However, Soviet improvements in their ICBM capabilities prompted the US to pursue further improvements in our own ICBM capabilities. Step in the XLR-87 (eXperimental Liquid Rocket) engine. AFRL’s Rocket Lab (at the time AF Rocket Propulsion Laboratory) contracted with Aerojet Corp to start the work on this engine in 1954. The XLR-87 became the LR-87, the engine for the new Titan ICBM. The first engine was delivered in 1957 with a first successful launch of the Titan in 1959. The Titan entered US service in 1963. 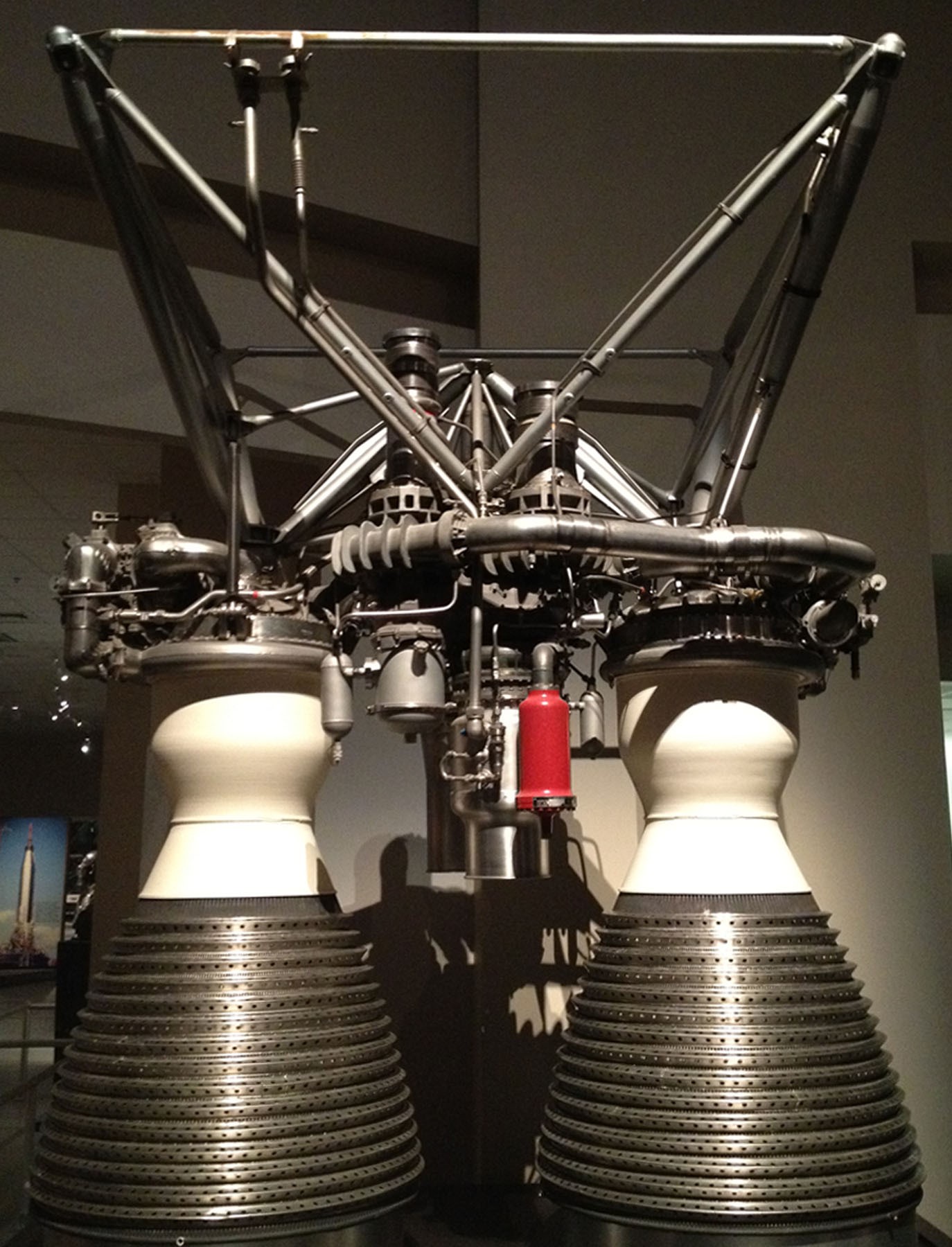 This image shows the engine arrangement used on the Titan. In the center, one can see the turbopumps that fed the propellants into the thrust chambers. Titan LR-87 engine (Source: National Museum of the Air Force, https://www.nationalmuseum.af.mil/Visit/Museum-Exhibits/Fact-Sheets/Display/Article/197696/aerojet-general-lr87-liquid-rocket/ )

The Lab didn’t stop there. Seeking ways to improve the nation’s ICBMs, AFRL experimented with switching from the original Liquid Oxygen (LOX)/Rocket Propellant-1 (RP-1) fuels to Nitrogen Tetroxide (NTO)/Aerozine 50. NTO/MMH is a storable propellant, whereas LOX/RP-1 has to be loaded into the vehicle just prior to launch. Switching to a storable propellant allowed the Titan to be launched on demand instead of taking precious minutes waiting while propellants were loaded into the vehicle. It also allowed the Titan to be stored in it silo fully fueled and ready to go. The drawback is that the fuels are highly toxic and corrosive. In engineering there are always trade-offs.

Then NTO/MMH modifications found their way into the Titan II ICBM and eventually into the entire Titan family of space access vehicles. The last of these vehicles, at Titan IVB, was launched on October 19, 2005 carrying a NRO payload.

AFRL’s IPD effort ran from 1994 to 2006 and demonstrated the world’s first Full-flow Staged Combustion engine. It was a joint effort between AFRL and NASA. The technologies were aimed at achieving “sortie-like” space access with 200 Mission Life, 20X improvement over Space Shuttle, and 100 mean time between overhaul. Below is a picture of the IPD engine installed at NASA Marshal’s E1 complex, Cell 1. 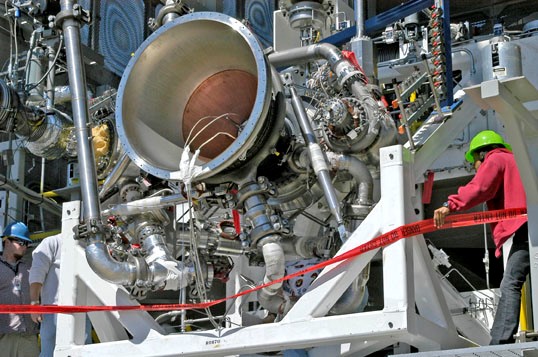 In 2004, at the request of Space & Missile Systems Center, now Space Systems Command, AFRL embarked on an effort to significantly improve US upper stage engine designs and capabilities. The effort had two prongs: 1) modernize the, then, 40 year old upper stage industrial base with new technologies, and 2) upgrade the industry’s modeling, simulation, and analysis (MS&A) tools used for engine design and analysis.

The hardware component of the program focused on the most technically challenging part of a new engine development, the turbopump. The current RL-10 upper stage engine was originally developed in the 1950s. Only incremental improvements have been made to that engine over the years. The USET program sought to bring that portion of the market into the 22nd century in manufacturing, technology, and materials. These technologies can now be found in several commercial space access engines.

The MS&A portion of the program focused on bringing the empirical tools used since the 1950s and bringing them into the 22nd century. The focus was on developing physics-based tools that can better predict what is physically happening in the various parts of the engine. The objective was to accelerate the design, development, and testing of new engine designs, get away from “build, bust, repeat” processes of decades past. Just this part of the program saw over 150 transitions/applications of the tools within the first 5 years of program completion, 2012. 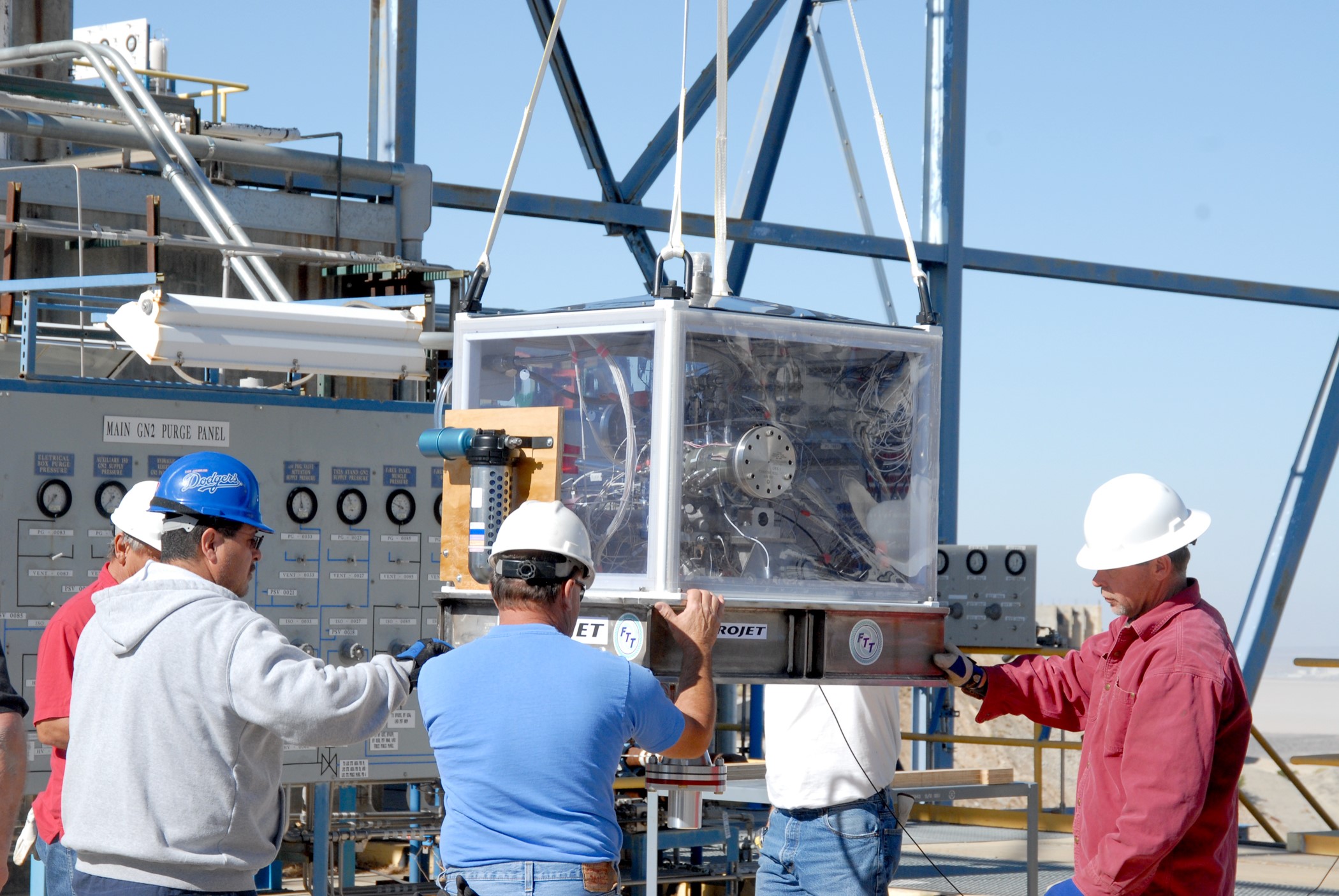 USET Turbopump being installed at Stand 2-A (Source: AFRL) 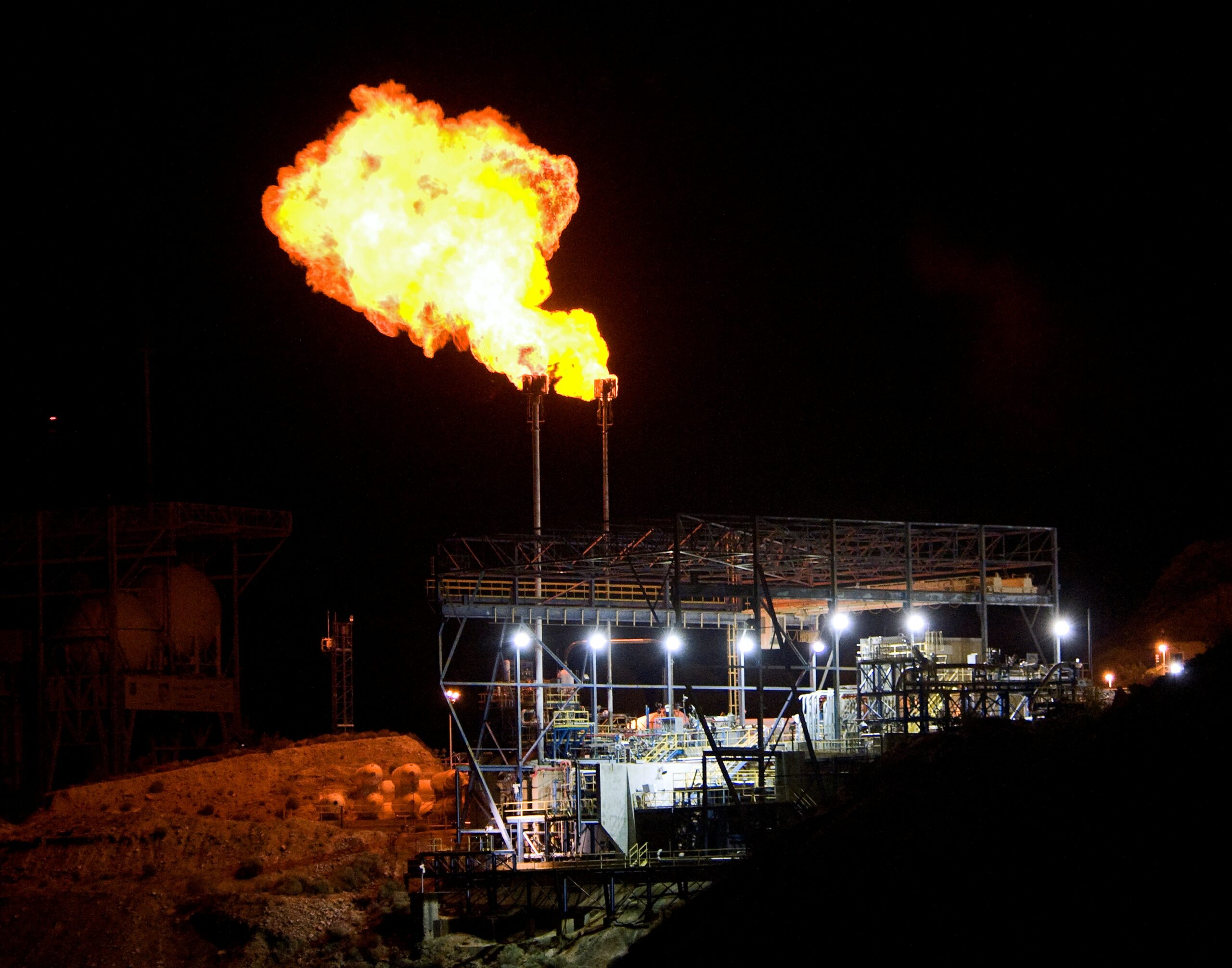 AFRL delayed the start of the HCB effort as the request of SSC so that the USET program could go forward. AFRL started HCB in 2007 with the goal of improving the US state of the art in rocket engines fueled using Liquid Oxygen (LOX) and Rocket Propellant-1 (RP-1). At the time, the DoD was buying launch services from United Launch Alliance (ULA) which used the LOX/Hydrogen fueled Delta IV and LOX/RP fueled Atlas V. However, the Atlas V used the Russian high performance RD-180 engine. AFRL’s effort sought to improve greatly on the RD-180 in terms of performance and also reusability.

AFRL and its industry partners leveraged the great MS&A tools developed under the USET program as well other technology developments under USET. HCB uses an Oxygen-rich Staged Combustion (ORSC) cycle which required the development of advanced materials in partnership with AFRL’s Materials and Manufacturing Directorate.

Like the IPD program, AFRL sought to make a highly reusable and operable LOX/RP engine capable of 200 mission life with 100 mean time between overhaul to support DoD desires for highly operable and responsive access to space. With the Russian invasion of Crimea in 2014, the HCB program became even more critical as Congress mandated the DoD stop using Russian engines as soon as possible.

Though the HCB program only progressed far enough to demonstrate the preburner and not a full engine it has been an outstanding success. We have fielded numerous requests for information regarding the technologies that came out of HCB. 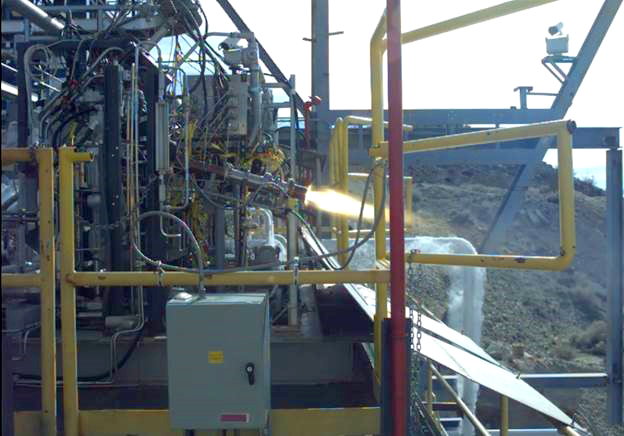 This was AFRL’s 3rd generation of reusable booster technology development, IPD and HCB having been 1st and 2nd respectively. This program had multiple components to it and greatly leveraged the previous work under IPD, USET, and HCB. The program evaluated the use of LOX/Methane fuels as well as modular engine designs.

Though the program was short lived, it saw a number of technology transitions into current commercial engine developments as well as being the foundation for AFRL’s current Affordable Responsive Modular Rocket (ARMR) effort.

The goal of the ARMR portfolio is to radically change the current space access engine design paradigm. We seek to reduce the development time for a new engine by 70% and reduce the development cost by 50%. The program leverage efforts started under 3GRB as well as USET. Under the Aerospike Rocket Integration and Suborbital Experiment (ARISE) AFRL, working in Public Private Partnerships with Invocon and ABL Space Systems, will fly the first ever modular aerospike engine. Each company has their own launch vehicle and chosen approach to implementing the ARMR architecture. ABL’s vehicle has been designated X-63 while Invocon’s is designated X-64. Follow-on efforts will continue to refine and validate this engine architecture.

AFRL is supporting Space Systems Command and others to develop the concept of Tactically Responsive Space (TacRS). AFRL’s effort is referred to as Tactically Responsive Space Access (TRSA) though it involves not only the responsive access to space but also responsive spacecraft. AFRL is heavily leveraging its PPPs with industry and its past and present research efforts to establish the technology base that can make TacRS an on-demand capability much like a commander calling up a UAV to do an ISR or strike mission. TRSA spans not just propulsion technologies but other aspects that are necessary to enable rapid, responsive space access and on-orbit operations. AFRL is partnered with Honeywell on their HALAS weather system to better understand the local weather situation at the launch site to reduce if not eliminate weather delays and scrubs. AFRL is also looking at what it takes to command and control multiple launch sites, commercial and government, to achieve “simultaneous” launches within a 24 hour Launch Order.

Rotating Detonation Rocket Engines are a radical departure from conventional rocket engines. Instead of rapid deflagration, they leverage detonation-based combustion and use the combustion wave to ingest, compress, and expel the next influx of fuel and oxidizer. AFRL’s RDRE program goal since 2017 is to understand, harness, and demonstrate a prototype of a Rotating Detonation Rocket Engine for launch vehicle boosters, upper stages, and spacecraft propulsion applications. Development RDRE chambers from 100-5000 lbf thrust are being tested across the US in collaboration with AFRL’s academic and industry partners. This includes the 5000 lbf thrust engine built by IN Space LLC chamber shown below during testing at Purdue University. 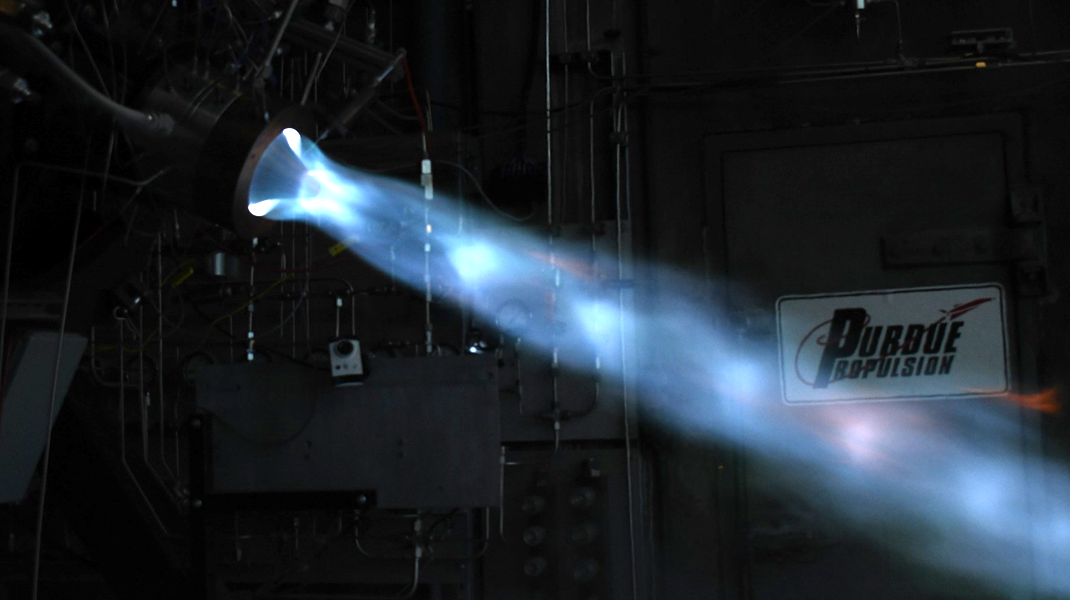 In parallel, state-of-the art modeling and simulations of lab scale experiments, such as the ones shown below, are being conducted on DoD’s High Performance Computing Center computers by AFRL & partners to understand the physics of combustors that can be too extreme for even robust rocket engine diagnostics to survive. Compact and efficient RDRE’s potentially eliminate the need for much of the mass in current rocket engines. This results in much greater payload from upper stages. When incorporated into the ARMR engine concept results in much much greater payload capability for the entire launch vehicle. 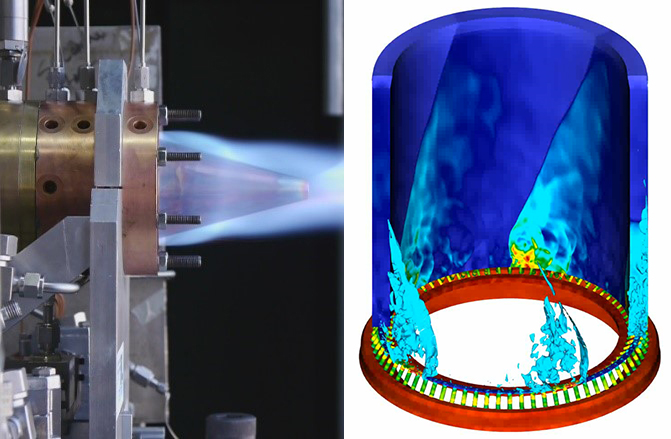 AFRL is partnering with a number of universities through AFOSR and companies to develop this technology and transition it to commercial launch service providers yielding increased capability available to the Space Force.

AFRL’s Rocket Lab has established its “Gateway to Site,” a process that enables companies and other customers to engage with us and potentially gain access to our world class facilities, subject matter experts, and technologies. We have greatly expanded our outreach to industry and the use of Public Private Partnerships since 2017. As a result we have gone from a 25% facility utilization rate to over 90% in just 4 years. In that time, we have helped companies go from having capitalization in the $10s of millions to multi-billion dollar.