At the request of Air Mobility Command, the team recently conducted a series of seat impact tests to advance Department of Defense preparedness to support potential Department of State requirements for implementation of the Portable Biocontainment Care Module, or PBCM. This self-contained, DoS-owned pod, developed in partnership with MRIGlobal, is specifically designed to protect crews and aircraft from follow-on contamination resulting from the transport of peopleexposed to infectious diseases, including COVID-19.

The PCBM isolates crew members in a similar fashion to the currently-used Transportation Isolation System. However, instead of a modular, framework-based construction with a heavy fabric covering, the PBCM is an all-metal structure that has been certified to fly on one of AMC’s commonly-used military transport aircraft, the C-17 Globemaster III.

“The unique capabilities housed within the 711th Human Performance Wing put us in the perfect position to contribute to this effort in a responsive and comprehensive manner,” said Benjamin Steinhauer, AFRL biomedical engineer and project lead. He added that having the existing test equipment on-site and readily available meant that the team was able to set up the test quickly and efficiently.

To accomplish the task, the Biodynamics team used both the Horizontal Impulse Accelerator and the Vertical Deceleration Tower to simulate impacts with a 250-pound seat occupant. Although the seats had previously undergone testing with loads up to 170 pounds, the more rigorous parameters were necessary to support safe-to-fly approval.

Steinhauer explained that the team used a large, instrumented anthropomorphic test device, similar to those used in automobile crash tests, to represent a 250-pound occupant. They then mounted the seats on track rails and exposed them to impact pulses on both test rigs. Results showed that, in both horizontal and vertical impacts, the seat successfully remained attached to the track rails and that any deformation was within the limits set forth by the Federal Aviation Administration. Data collected from the anthropomorphic test device showed that the probability of injury fell below Air Force accepted risk levels.

“Within days, we were able to collect the much-needed data that was critical to the advancement of this project,” Steinhauer said. He credits the talents of the Biodynamics team, to include research team members from Infoscitex Corporation, for the successful and timely test event.

“The PBCM program has been one of the quickest programs we have been able to run from start to finish given the amount of detail required to successfully conduct an impact in two different facilities,” he said. “It is important to the Aircrew Biodynamics and Protection team that we can assist in providing data and injury risk for the PBCM program to help provide in-flight medical care and transportation for those patients in need during the COVID-19 pandemic.”

The team provided the test data to the Air Force Life Cycle Management Center, who will pass along the findings to a safe-to-fly board for final recommendation. Although no further testing is planned for this project, Steinhauer says the Biodynamics team stands continuously poised and ready to support future COVID-19 test efforts and similar operational needs as necessary. 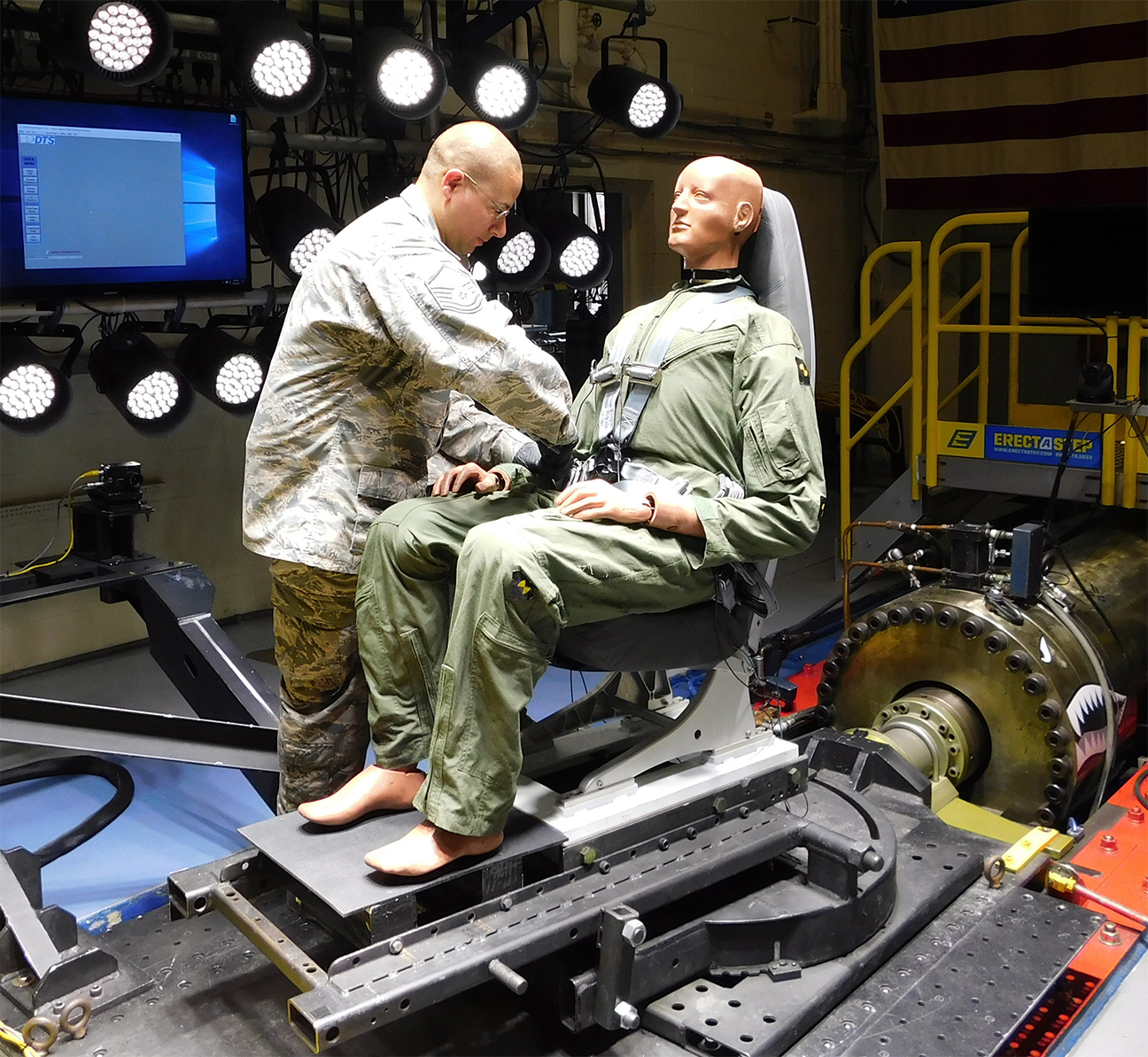 Master Sgt. James Chase of the AFRL 711th Human Performance Wing Biodynamics team prepares an instrumented 250-pound test device, simulating a human occupant, for seat testing on the Horizontal Impulse Accelerator, located at Wright-Patterson Air Force Base. The test is one of a series recently conducted to support the acceptance and implementation of the Portable Biocontainment Care Module, which will aid in the safe transport of personnel affected by infectious diseases, including COVID-19. (Photo courtesy of Infoscitex Corporation/Christopher Albery)